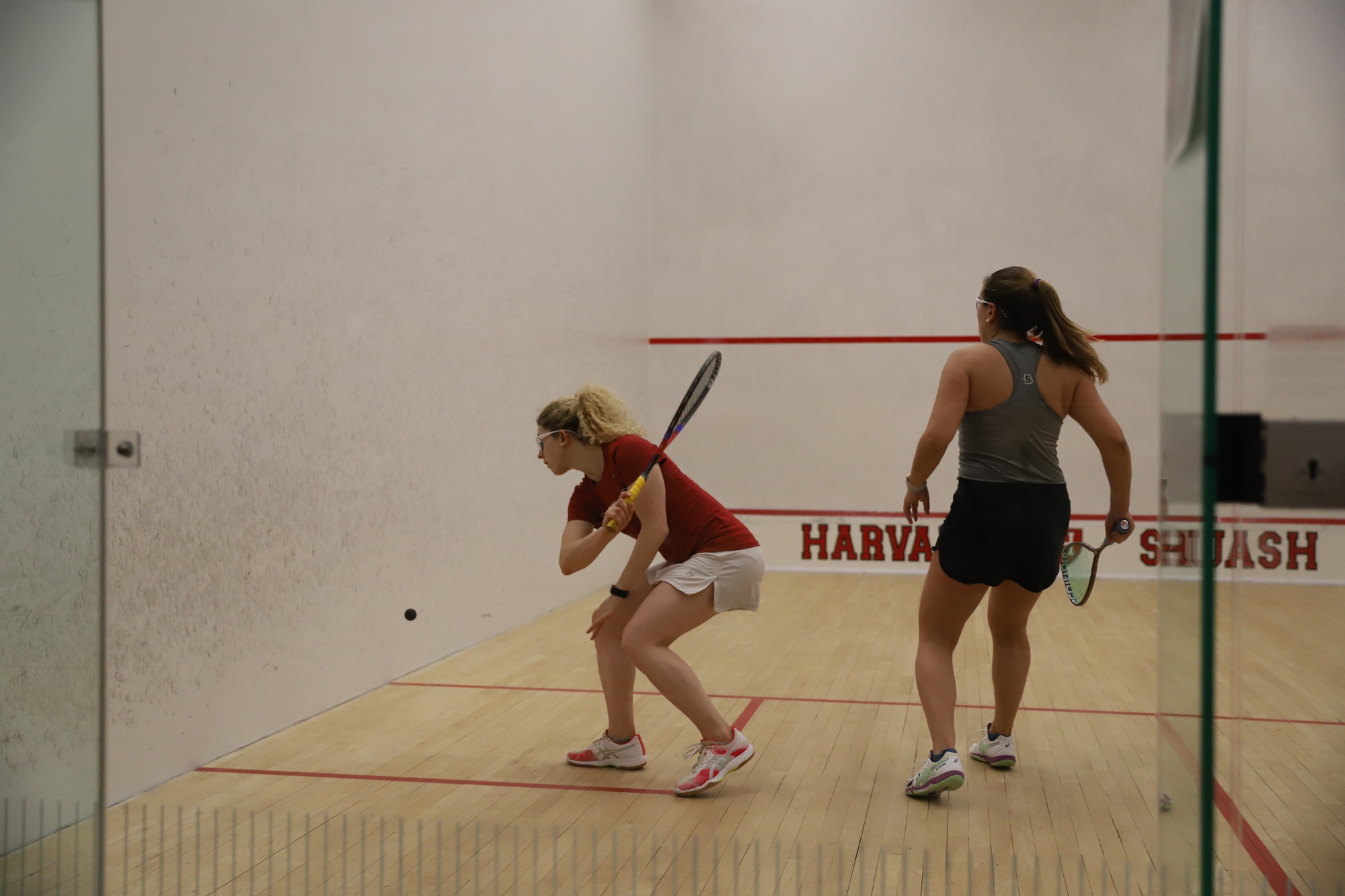 Friday’s win against No. 13 Brown (pictured above) and Sunday’s triumph versus No. 4 Yale would mark the Crimson’s 12th and 13th victories against ranked opponents, helping Harvard to its perfect 13-0 record. Feb. 15 will break the ranked opponent streak for the Crimson as the team squares off with an unranked foe for the first time this season against the Big Red of Cornell. By Owen A. Berger
By Eliot Min, Crimson Staff Writer

After bursting out to a commanding 2-0 lead over her opponent, No. 3 Trinity College’s Nanna Carleke, Harvard junior Hannah Craig fell just short in the third and fourth games. In the decisive fifth game, Craig responded with a dominating showing, overwhelming Carleke with an 11-2 victory to secure the seventh seed matchup for the Crimson. It was one of Harvard’s eight victories in its 8-1 romping of the Bantams on Feb. 5.

With her gutsy win against Carleke, Craig continued her dominance as a member of the Crimson—she has yet to drop a match in her three years on the Harvard squad. Co-captain Gina Kennedy bounced back from a first game loss to win her match, 3-1, at the first pairing and extend her personal win streak to 36. Senior Eleanore Evans rallied from 0-2 down to win the fifth-seed contest and her 11th victory of the season. At the second seed dual, Senior Amelia Henley steamrolled to a 3-0 victory to bring her win streak to 46 games.

According to Craig, although Trinity is one of the more challenging matchups for the Crimson, she was able to keep cool and execute her shots under pressure.

“[The match] definitely wasn’t easy at all,” Craig said. “It's always a privilege to play at Trinity and you never know what to expect especially because they produce such large crowds, and that can result in some other stress as well. So I think I came ready to compete. I had a very tough competitor and she put me under pressure. [But] I was somehow able to pull through.”

Harvard is undefeated over the last six years, having won all its matches since losing 4-5 to Trinity to close out its 2013-2014 campaign. Evans, who has been on the team each of the last four seasons, credits the squad’s incredible run of success to its unwavering work ethic and the leadership of its seniors.

“I think all four seniors do a really good job of exemplifying the attributes of putting in the work and seeing the result later,” said Evans. “We've all been on the team for four years now, we've won three national championships and we're going for a fourth—but it’s not without effort, and it's not without focus, and it's definitely not without cooperation. So I think that the good team unity that comes from the [senior class] really trickles down and affects the team at large.”

“Everyone's just been relishing the opportunity to play,” Craig added.

With its win against Yale, Harvard secured at least a share of the Ivy League title for the sixth straight season. It has a chance to complete its sixth straight undefeated season this weekend when it travels to Cornell on Saturday to close out the season. The game will start at 12:00 p.m.

—Staff writer Eliot Min can be reached at eliot.min@thecrimson.com.