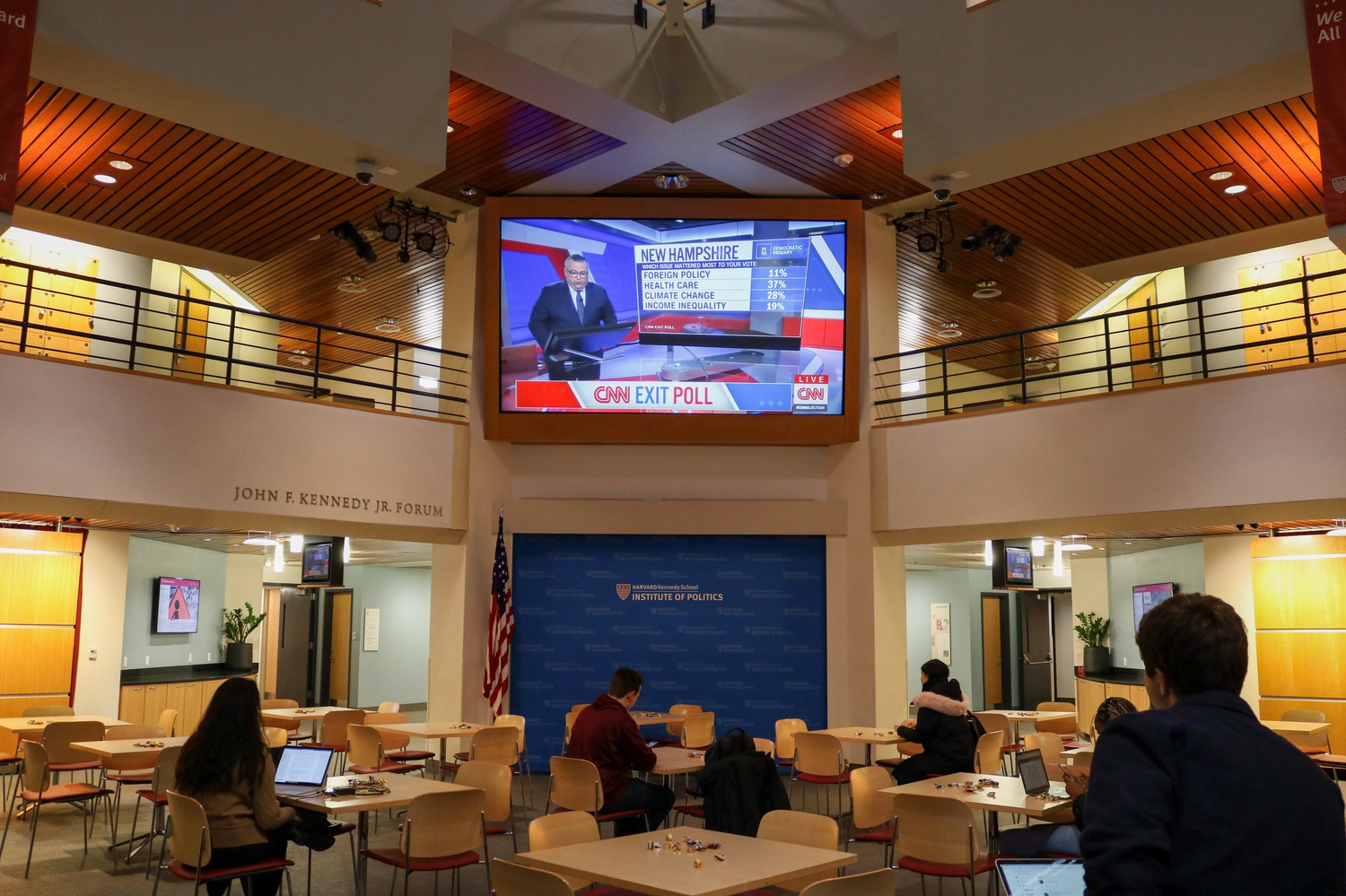 Harvard students gather at the Institute of Politics to watch the results of the New Hampshire primary Tuesday evening. By Jonathan G. Yuan
By Jasper G. Goodman, Crimson Staff Writer

Sanders won the Granite State primary when he ran for president in 2016.

Government Professor Jon C. Rogowski, however, cautioned that Sanders is unlikely to gain much momentum from the victory given that he was expected to do well in New Hampshire.

“I think that Sanders has shown that he has built an operation that can put together a series of wins, but I don’t think that he gets any additional momentum from winning because this should be a state that he should win pretty easily,” Rogowski said.

Massachusetts residents will cast their ballots on March 3, as one of 14 states to vote on Super Tuesday.

Buttigieg — a former leader of Harvard’s Institute of Politics who served as the mayor of South Bend for eight years — came within a small margin of Sanders Tuesday. After a strong performance in the Iowa caucuses last week, Buttigieg surged in New Hampshire polls and surpassed former U.S. Vice President Joseph R. Biden Jr. Biden finished in fifth place on Tuesday.

“I think that you saw a very large percentage of those people that were making up their minds in the last week — or even the last couple days — were breaking in Buttigieg’s favor,” Rogowski said. “And that’s largely because of the very strong showing that he had out of Iowa, which puts him in a good position to expand his campaign network of operations to sort of take his pitch to a more national stage.”

Rogowski said Warren failed to sustain the support she garnered in New Hampshire earlier in the race.

“Not a good night at all for Elizabeth Warren,” he said. “I think it came down to in part that she peaked too early.”

U.S. Senator Michael Bennett (D-Colo.) and entrepreneur Andrew Yang both dropped out of the race Tuesday.

Harvard College Democrats for Andrew Yang President Michael Zhu ’22, who worked for the Yang campaign over winter break and canvassed for him in New Hampshire, said he was disappointed to see Yang drop out.

“I think he ran a very well-run campaign, did so many things right,” Zhu said. “Him — and even Evelyn Yang, his wife — are truly role models for Asian Americans like myself.

“I think that politics is not generally an area that Asian Americans are known to make strides in, but Andrew Yang really has moved that entire discussion,” Zhu added.

Rogowski, who was in New Hampshire for Tuesday’s primary, cautioned that the outcome of the Democratic nomination is “far from a foregone conclusion.”

“We’re all focused on New Hampshire at the moment, and we were all focused on Iowa a week ago,” he said. “But a lot of voters in South Carolina and places like Nevada and the Super Tuesday states haven’t really tuned in to the same degree yet.”