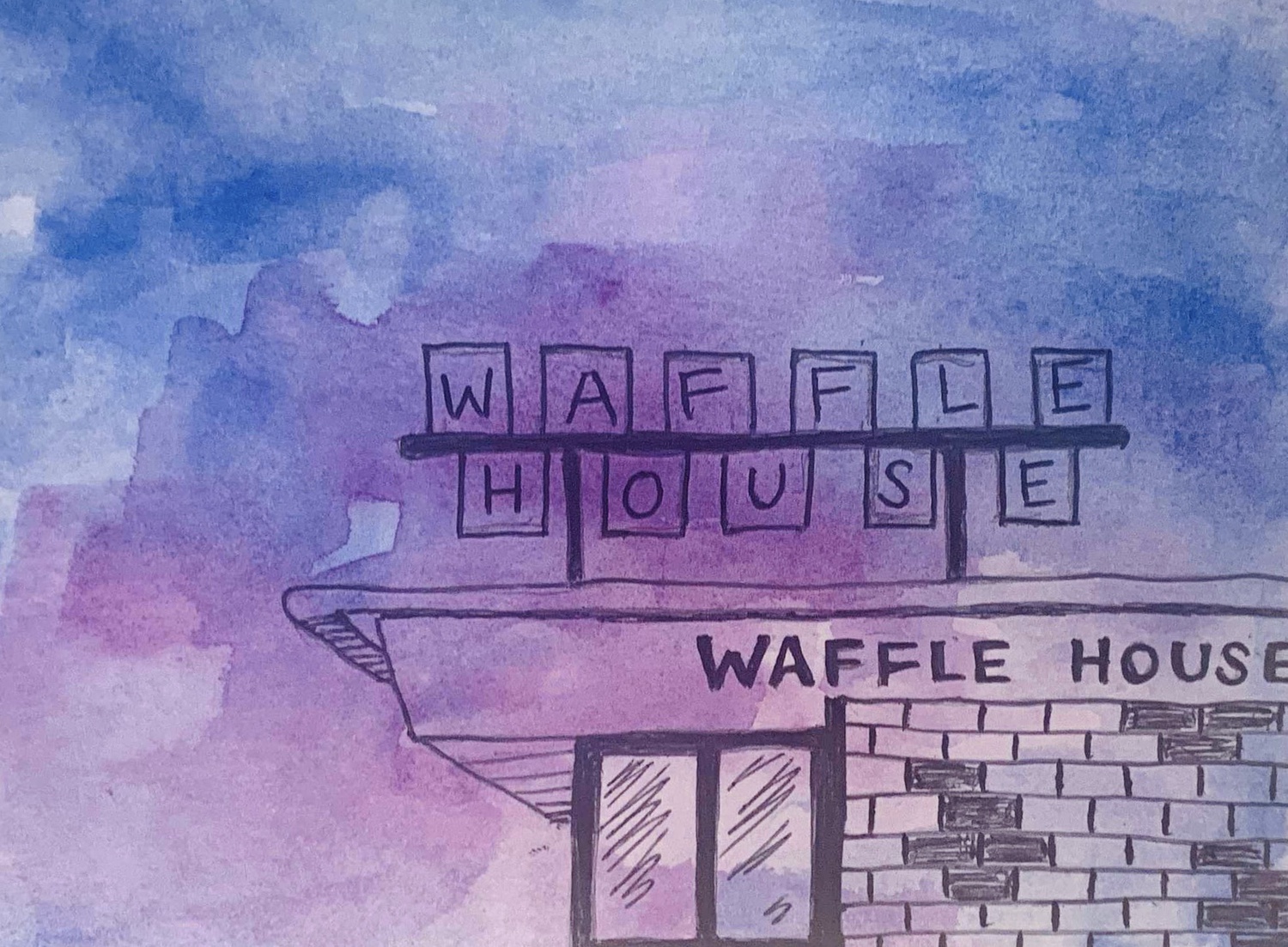 I wish I could pinpoint what exactly it is that keeps me coming back. Perhaps it’s the knowledge that Waffle House will welcome six bleary-eyed high school seniors who can’t help but order the entire menu on a Saturday night, just as it will welcome families the next day in their Sunday best and truckers who’ve driven across countless state lines the night after that.
By Roey L. Leonardi

I am attempting to remember my first time (which I’m told should be unforgettable). Try as I might, though, I cannot recall that initial stroll beneath the 11 letters which cast their divine light over so much of small town USA. The yellow tiles of the Waffle House sign loom over nearly every exit along I-26, albeit more often with a burnt out letter or two than not. They are as much a staple of the landscape of rural South Carolina, my home state, as is a field of cows, a roadside peach stand, or a highway billboard proclaiming, “Forgive my sins, Jesus, save my soul.”

I think my father may have introduced me — I have a vague memory of him pulling up outside of one of the Waffle Houses in Charleston, where I grew up, and turning around to inform me of the murder that occured in that very parking lot just a few months ago. And while this first impression of the 24-hour restaurant was jarring, my father shrugged it off, saying, “Oh, you get that with anywhere open past midnight.”

Though I made sporadic visits to Waffle House throughout my childhood, I did not become fully enamored until high school. After school one Friday during my sophomore year, I sat with two girl friends in a red pleather booth at a Waffle House, swinging my sneakers over the checkered linoleum. We scooped “whipped spread” from plastic tubs, letting it mingle with glistening, half-melted chocolate chips and saturate the crisp-on-the-outside, fluffy-in-the-center delicacy for which the establishment is named. Someone had cued an early 2000s pop song on the jukebox. I watched as cars whirred and gleamed outside, batter overflowed from waffle irons, and employees leaned back against the counter in their blue uniforms, laughing.

Our waitress, while bringing me another Diet Coke for which I had not yet thought to ask, chuckled and looked down at us, saying, “I remember the stuff I’d get up to when I was your age.” She began a lengthy tale about stealing her sister’s cigarettes. She spoke in a tone of voice we’d used countless times, in front of school bathroom mirrors and crouched against heavily graffitied bus seats; it seemed to say, This is a secret, I am confiding in you, and though she was 50 or so, for a moment we were all teenage girls. She knew we were up to no good, but she was in on it.

After that, Waffle House became a go-to. I could find one almost anywhere. My father took me to Waffle House after picking me up from my first day of work at my first ever job. The one near my high school became a tempting alternative to fourth period. And when my best friend drove me back from the party where I had my first kiss, we didn’t go straight home. I had, of course, to fill her in — over a sausage, egg, and cheese hashbrown bowl that I was too nervous and excited to eat. To this day, my mother and I stop at the same Waffle House in West Columbia each time we visit my grandma in the red clay hills of upstate South Carolina.

I wish I could pinpoint what exactly it is that keeps me coming back. Perhaps it’s the knowledge that Waffle House will welcome six bleary-eyed high school seniors who can’t help but order the entire menu on a Saturday night, just as it will welcome families the next day in their Sunday best and truckers who’ve driven across countless state lines the night after that. Waffle House does not ask you to be more than you are, and you treat it much the same. It is a mutual openness, a shared warmth. You laugh till you ache beneath the fluorescence which illuminates everything: grease and mop water on the kitchen floor, just enough quarters counted and stacked on top of a laminated menu, the tattoo on the wrist of a waitress who will call you “baby” when she asks if you need that drink to-go.

Perhaps the reason lies in sitting with my mother on the drive to my grandma’s house. My mother always always orders her hashbrowns scattered, smothered, and covered (that’s lingo for sauteed onions and melted cheese). Says it’s the only way. She still calls the red clay hills we’re driving towards “home,” even though she’s lived in Charleston for years. I like to imagine most of the people sitting around us are people headed home. This is a stop on the way. When we see that sign, those letters which lit the skyline of my adolescence, we know we’re almost there.

—Staff writer Roey L. Leonardi can be reached at roey.leonardi@thecrimson.com. This is one of three essays published as a part of FM’s 2020 “Contemporary Romance” feature.