No. 18 Men's Hockey Skates to Tie Against Yale 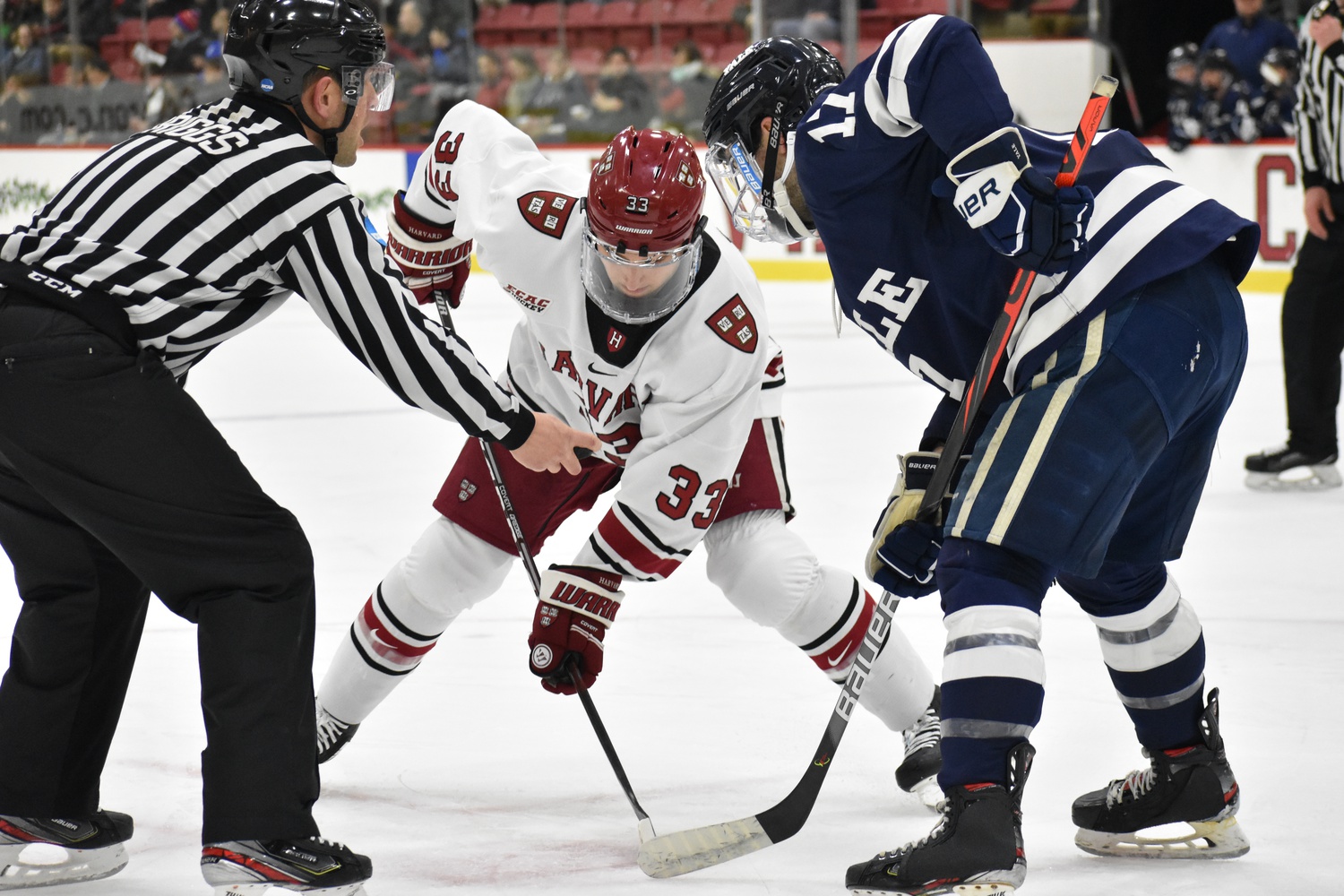 Returning to familiar terrain after a long stretch of neutral and away games, the No. 18 Harvard men’s hockey team faced Yale in a crucial conference clash. The Crimson, having been thoroughly bested in its Beanpot consolation game, needs to have a strong finish to keep its postseason hopes alive — though chances of an at-large bid are slim, Harvard will either way have to come out on top in its remaining ECAC matchups.

So the hosts had more than enough reasons to want to see the Bulldogs defeated. But Yale (10-12-2, 7-8-2 ECAC) managed to nab one conference point against the Crimson (11-8-5, 9-4-4) after having lost its two previous contests versus Harvard this season. Indeed, the Bulldogs were the ones who jumped out to an early lead, and the Crimson had to have a third-period surge to force — an ultimately scoreless — overtime.

“Overall, they were the more competitive team,” head coach Ted Donato ’91 said. “[They] blocked a lot of shots, won a lot of one-on-one battles, tied things up in the neutral zone… But we battled back... I just want to send a clear message to the guys that we’re all on the same page as to how hard the hockey games become this time of year… Playing catch-up hockey is losing hockey.”

When the teams took the ice for that final frame, Yale was leading, 4-2. The visitors had kept the pressure on Harvard for what felt like 40 minutes. Though a slightly more productive second period for the Crimson had evened up the shot totals somewhat, the Bulldogs still had 23 shots on goal to Harvard’s 18, despite having never trailed in the game.

“I think the first ten minutes of the third, we didn’t really establish any o-zone time,” rookie forward Nick Abruzzese said. “I think that that was the troublesome part. In the second half, we started...playing in their end and that led to success, [and] being able to tie it.”

The Crimson’s real push began with less than 10 minutes left in regulation. There was a noticeable change to the game’s pace, and Harvard spent a great deal more time in the offensive zone. Around the 12-minute mark, Yale senior forward Will D’Orsi was sent to the box for tripping. 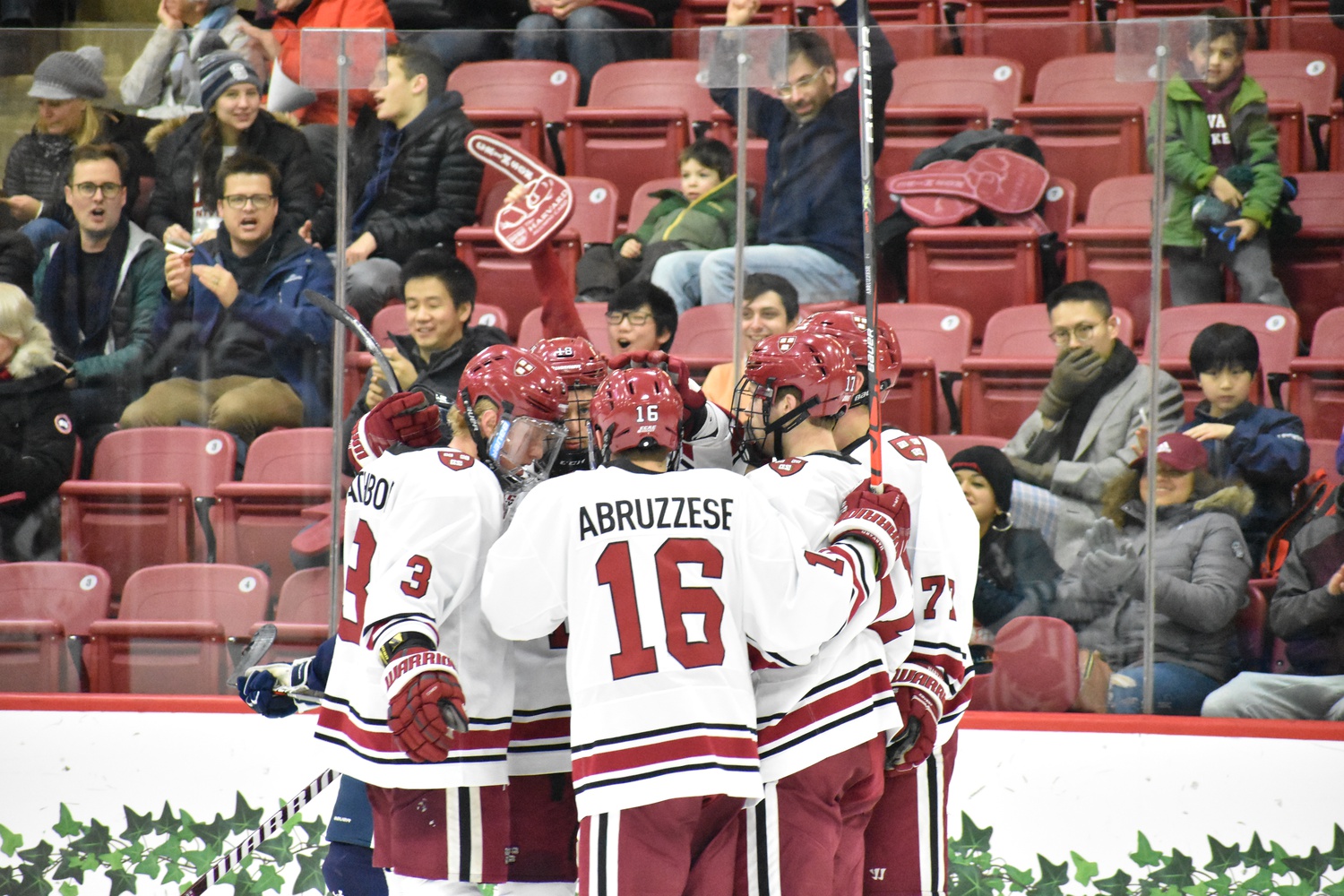 A consistent strength for the Crimson has been its top line. Initially made up of its top three scorers, Dornbach, Drury, and Abruzzese, the coaching staff has taken to replacing Dornbach with rookie John Farinacci when making adjustments. By Amanda M. DiMartini

It was the Crimson’s second powerplay of the period. Much has been made of Harvard’s NCAA-best man-advantage squad, which was converting at a pace of 31.3 per cent heading into the weekend. But the Bulldogs played an aggressive penalty kill, stymying the hosts’ attempts to set up despite their own bottom-10 numbers (76.1%, coming into Friday). Yale had already netted a shorthanded tally earlier in the game.

This penalty went a similar way, with the Bulldogs keeping the Crimson to the outside. This time, however, Harvard controlled play in the offensive zone even after the powerplay had ended. Rookie defenseman Henry Thrun passed to his defensive partner, sophomore Marshall Rifai, along the blue line, and Rifai found Abruzzese at the goal line.

The winger considered the coverage in front of him and went back to Rifai. This time, when Rifai fed Abruzzese the freshman saw enough space between the post and Yale senior net-minder Corbin Kaczperski to fire it home.

A game that had seemed out of reach before was suddenly a feasible comeback effort. With just over five minutes to go in regulation, the Crimson turned up the desperation, piling shot after shot on Kaczperski’s net. The final third-period shot difference would be 12 for Harvard, and 6 for the Bulldogs.

But Yale had enough offensive-zone time that the Crimson could only pull its own goaltender with two minutes to play. Just as senior Cameron Gornet headed to the bench for the extra skater, though, sophomore forward Casey Dornbach found second-year defenseman Jack Rathbone at the blue line. Rathbone teed up a one-timer that went through a screen and past Kaczperski, tying things up just 81 seconds before the end of the game.

“I think we have a pretty resilient group,” Abruzzese said. “A couple times this year, we’ve been down [and] we haven’t had as good of a push as we did today… Just playing with desperation and intensity like we did — if we can play like that for the full 60 I think we’ll have a lot of success.” 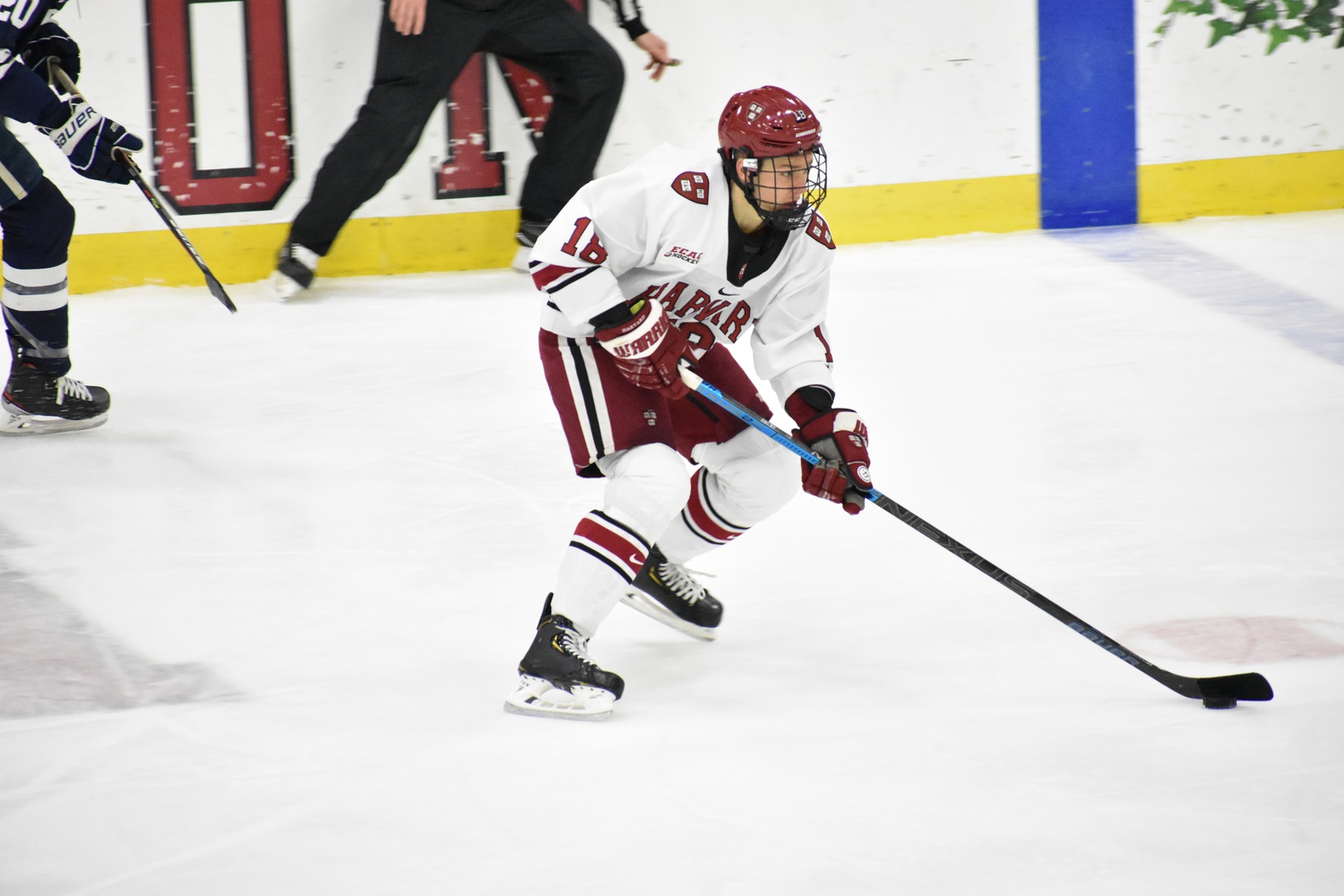 Before the third, of course, the story was far less impressive for Harvard. Despite their losing record, the Bulldogs came out of the gate looking obviously more energetic and confident. The Crimson conceded two early goals before sophomore forward Jack Drury got one back for the hosts. Yale added two more in the second, including a shorthanded tally, and the hosts responded with a powerplay goal courtesy of Abruzzese.

The five minutes of overtime proved inadequate for either team to secure victory. While the Bulldogs had 4 shots on goal to the Crimson’s 2, one Harvard chance left fans speechless. Coming down the left side, Drury fed Dornbach at the inside edge of the left circle. Instead of shooting, Dornbach passed to Abruzzese on the right side. The rookie seemed to have a mostly empty net to shoot at, but Kaczperski came across in time to get a pad on his attempt.

“Hopefully next time it goes in,” said Abruzzese of his missed chance in the extra frame.

A game-winning tally in overtime to cap off a hattrick would surely have made Friday a night to remember for the freshman. As is, Abruzzese took home a share of the Tim Taylor Award, given out to the MVP of a meeting between these two teams in Cambridge every season. His rookie campaign has featured other impressive numbers.

Abruzzese’s two goals came in addition to two assists, so he factored into each of the Crimson’s scores against Yale. He leads his team in points (13–22—35), and paces all freshmen in points, assists, assists per game (0.92), and points per game (1.46). If Harvard wants to have a satisfying end to its season, it will need to depend upon the services of players like Abruzzese in the weeks to come.

At the other end of the ice, Gornet made his first start between the pipes since a Jan. 25 tie against Cornell. The senior has faced pucks for 35.2 per cent of the Crimson’s season, with rookie Mitchell Gibson having impressed early on. But clearly the coaching staff is ready to turn to Gornet in key contests such as Friday’s.

“I thought that [Gornet] was much like our team,” coach Donato said. “Maybe not as sharp as we would want [him] to be, but really battled, and made some saves. I don’t think tonight was a situation where our issues came from the goaltender. That 100 per cent was not the case.” 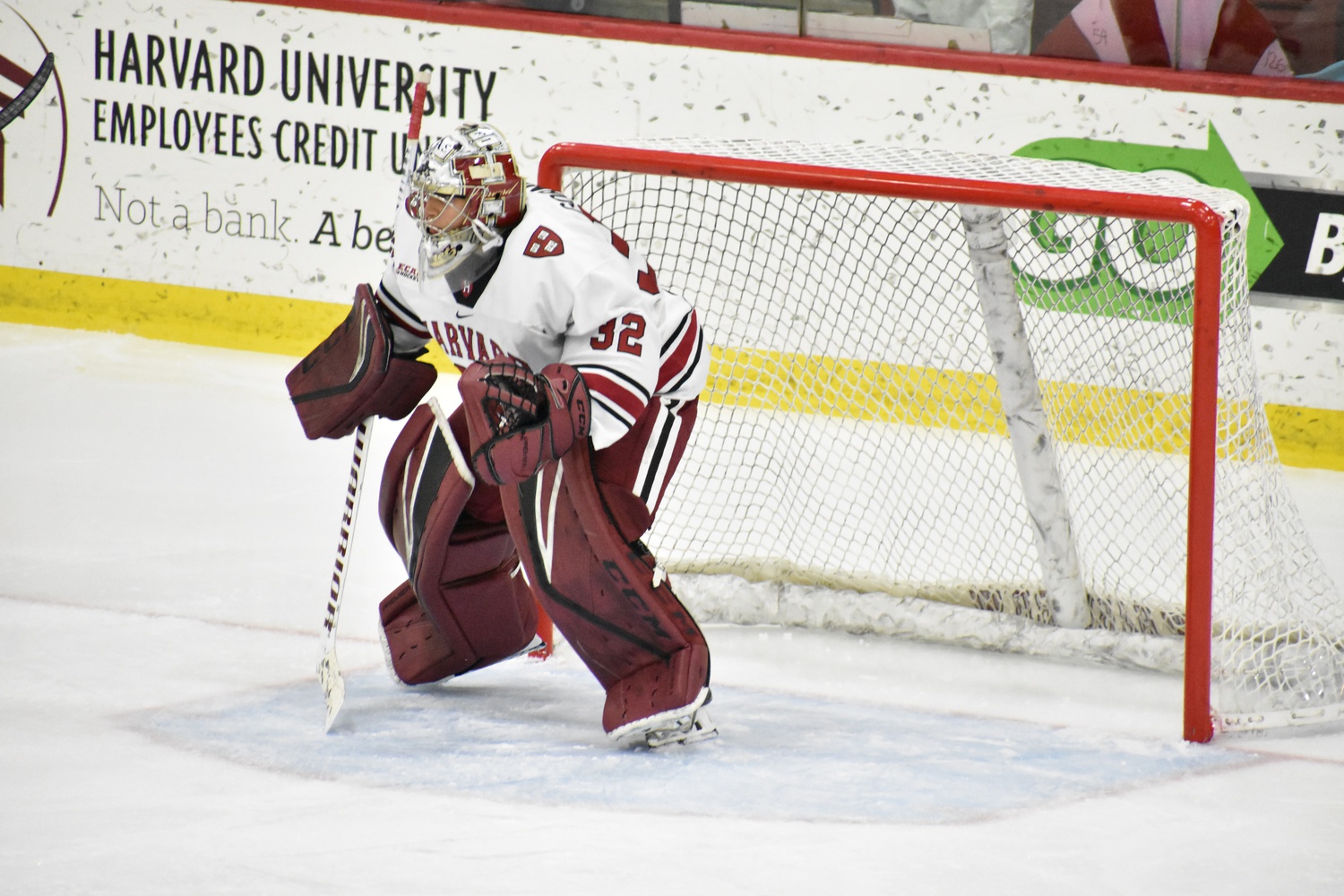 Gornet's .907 save percentage is a few points lower than his teammate Gibson's, but Harvard's two goalies both have the same winning percentage. By Amanda M. DiMartini

The squad now faces the season’s home stretch, during which just about every contest takes on a do-or-die feel for teams not assured of an at-large bid to the NCAA Tournament. Harvard certainly faces some beatable teams before March, and it will be glad to collect those conference points.

But equally important is the team’s ability to face imposing foes like No. 5/7 Clarkson, whom the Crimson visits next weekend. Any road to the ECAC Tournament championship will go through a team like Clarkson or Cornell, and if Harvard hopes to go further, it will need to prove its mettle against such competition first.

“I think that in a lot of ways, some of our most impactful players are still lacking experience in some of these types of situations,” coach Donato said. “But...we’d better learn quickly, or we won’t get the results that we want.”