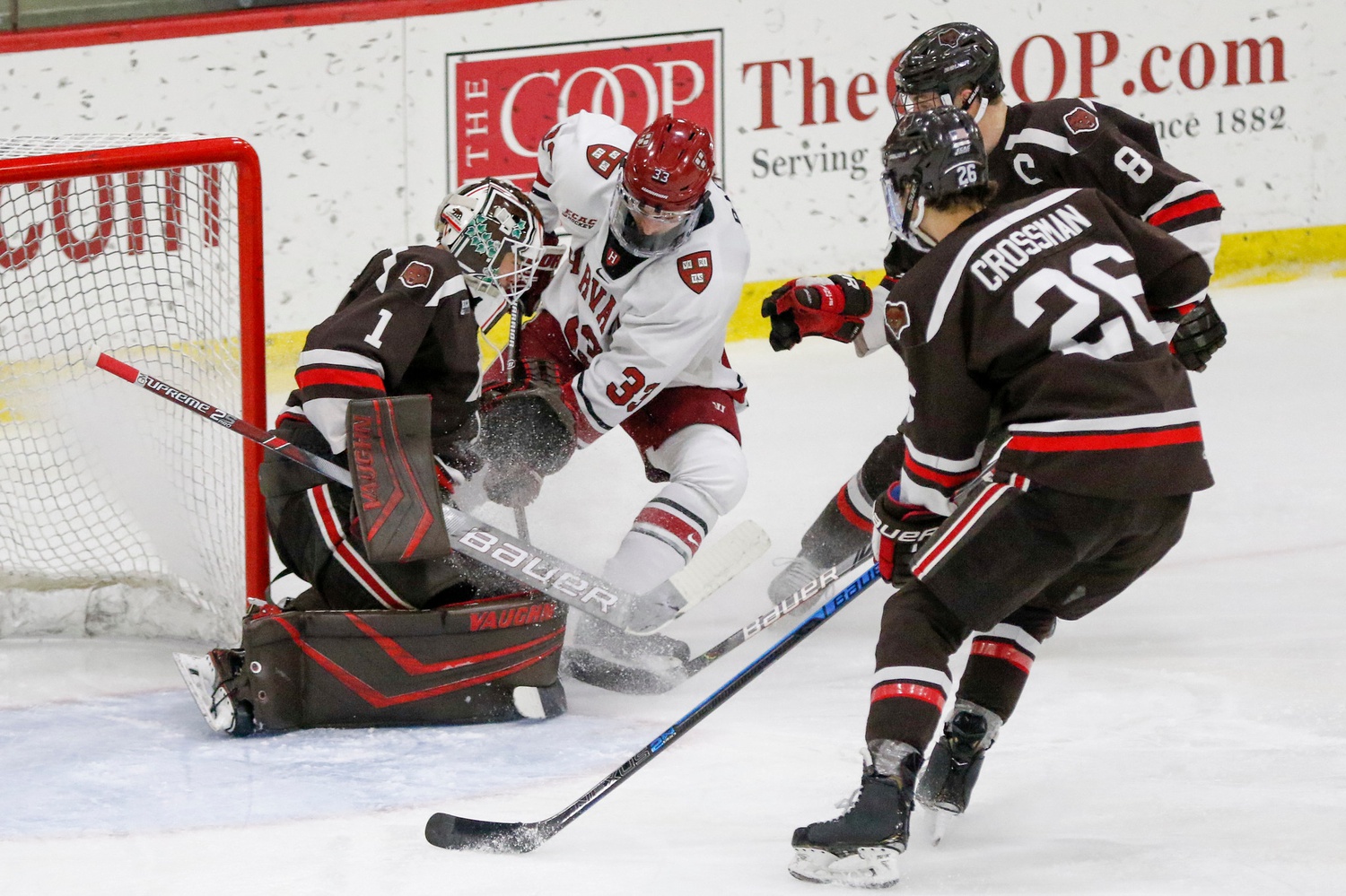 Despite 31 shots against Brown goaltender Gavin Nieto, Harvard broke through only once. A five-minute major penalty proved to be a crucial missed opportunity to cash in for the Crimson. By Timothy R. O'Meara
By Spencer R. Morris, Crimson Staff Writer

With the Beanpot Tournament in the rear view, the Harvard men’s hockey team could finally turn its attention solely to the home stretch of the conference slate: just six games over three weekends to lock in the ECAC playoff seeding.

“I give Brown credit,” Harvard coach Ted Donato ’91 said. “I’m frustrated with our group, but I’m frustrated more that we didn’t create more and take what was given to us. We would’ve had to have hard offense, down low and holding onto pucks and taking pucks to the net. Lately, we just haven’t consistently had enough guys that want to do that.”

After a Brown equalizer early in the second frame, the teams skated neck and neck for the next 25 minutes of game action. Each group tested the other’s goaltender, but the backstops held firm.

Midway through the final stanza, Bears forward Colin Burston received a game misconduct for hitting Crimson sophomore Jack Drury from behind. Drury remained on the ice after the illegal check near his own bench, and he even exited through the tunnel for a moment before returning to the game.

With Burston ejected and the teams knotted at 1-1, Harvard sent its NCAA-best powerplay (30.7%) onto the ice for a five-minute, non-releasable opportunity — a game-altering chance if there ever was one.

Despite Harvard’s skilled man-up unit, the Bears staved off the attack, preserving the tie. Ten additional minutes of trading chances, plus a five-minute overtime period, could not determine a victor.

“I said to our guys after: ‘[I’m] disappointed and frustrated, but not surprised,’” coach Donato said. “We had a five-minute powerplay. We had a couple of empty nets, one on the powerplay and one otherwise, and we have to create more opportunities. When it’s all said and done, we’re now at the time of the year where one play can really change the game.”

For just the fifth time in 25 games this season, the Crimson failed to nab a powerplay goal, going 0-for-2 with the extra man on Saturday. 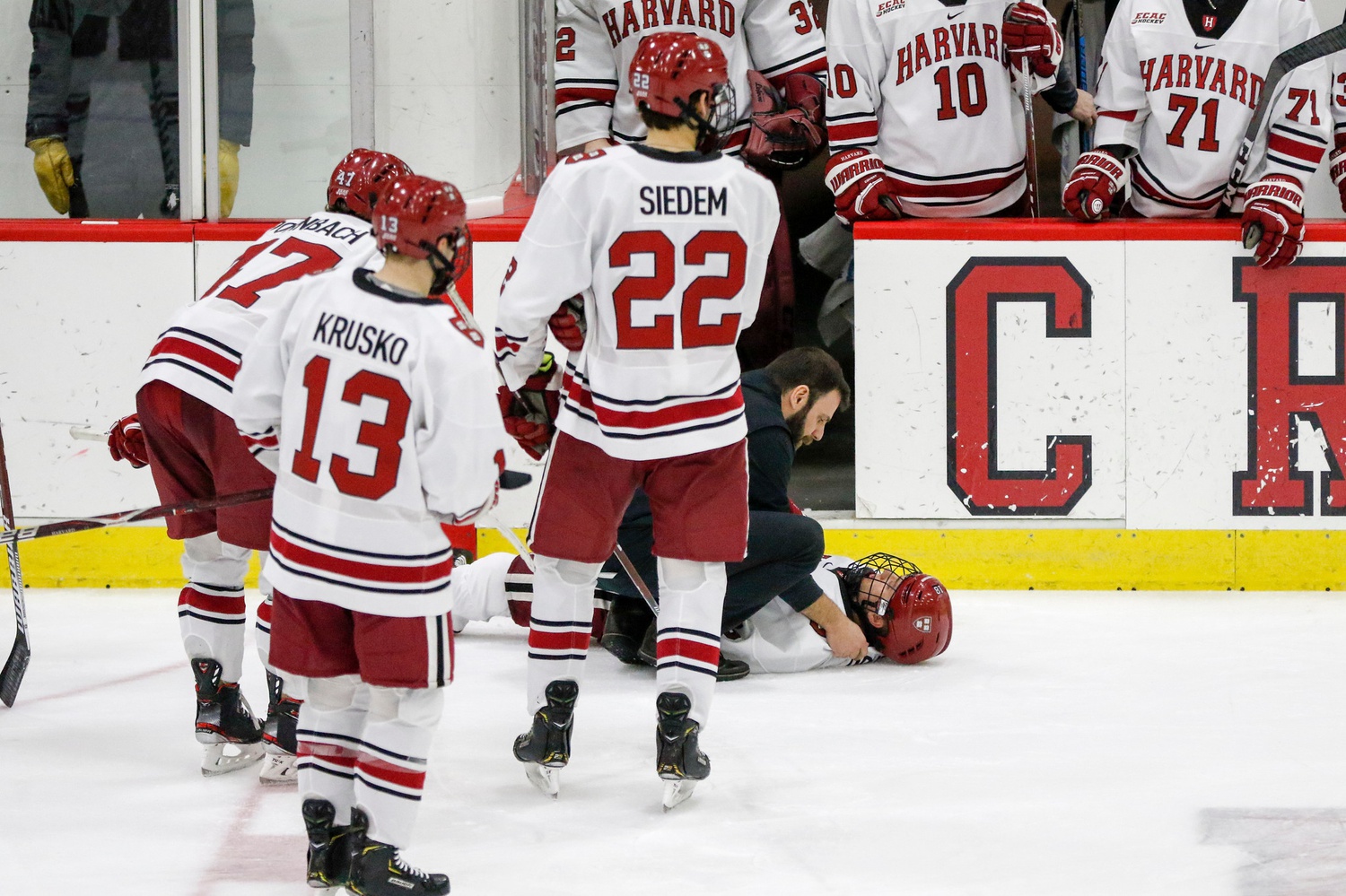 Brown's Colin Burston hit Harvard's Jack Drury from behind, earning a game misconduct and sending his Bears down a man for five non-releasable minutes. By Timothy R. O'Meara

What’s more: for the second consecutive night, an Ivy League foe with an inferior record took Harvard to — and through the end of — overtime.

“That five-minute powerplay, that’s when our powerplay is supposed to be No. 1 in the country,” Crimson defenseman Reilly Walsh said. “We have to score one. Then again, we had plenty of chances, too…. Two ties is tough [against] teams that we should theoretically beat, but at the same time it’s the ECAC and this is crunch time.”

Harvard broke the ice on its first shift Saturday night. Drury received a cross-ice pass in the neutral zone and strode down the left side of the ice. The center left a drop pass for defenseman and classmate Jack Rathbone, who one-timed a missile past the glove of Brown goaltender Gavin Nieto (1 GA, .968 SV%).

Harvard was able to hold its lead for a bit more than a period. Five minutes into the middle stanza, the Bears evened the ledger courtesy of junior forward Joachim Weberg.

On a neutral-zone regroup, captain Zach Giuttari sauced a stretch pass to Weberg, who darted into the Crimson’s zone upon receiving it. Drury, trying to break up the in-alone chance, hooked Weberg as he closed in on Harvard net-minder Mitchell Gibson (1 GA, .963 SV%).

The referees awarded Brown a penalty shot, and on the ensuing play Weberg bested Gibson, marking the first time since March 21, 2003 that an opponent has cashed in on a penalty shot against the Crimson.

“We caused our own problems that led to the penalty shot,” coach Donato said. “There really is no way around it. You can’t give up a better chance than that.” 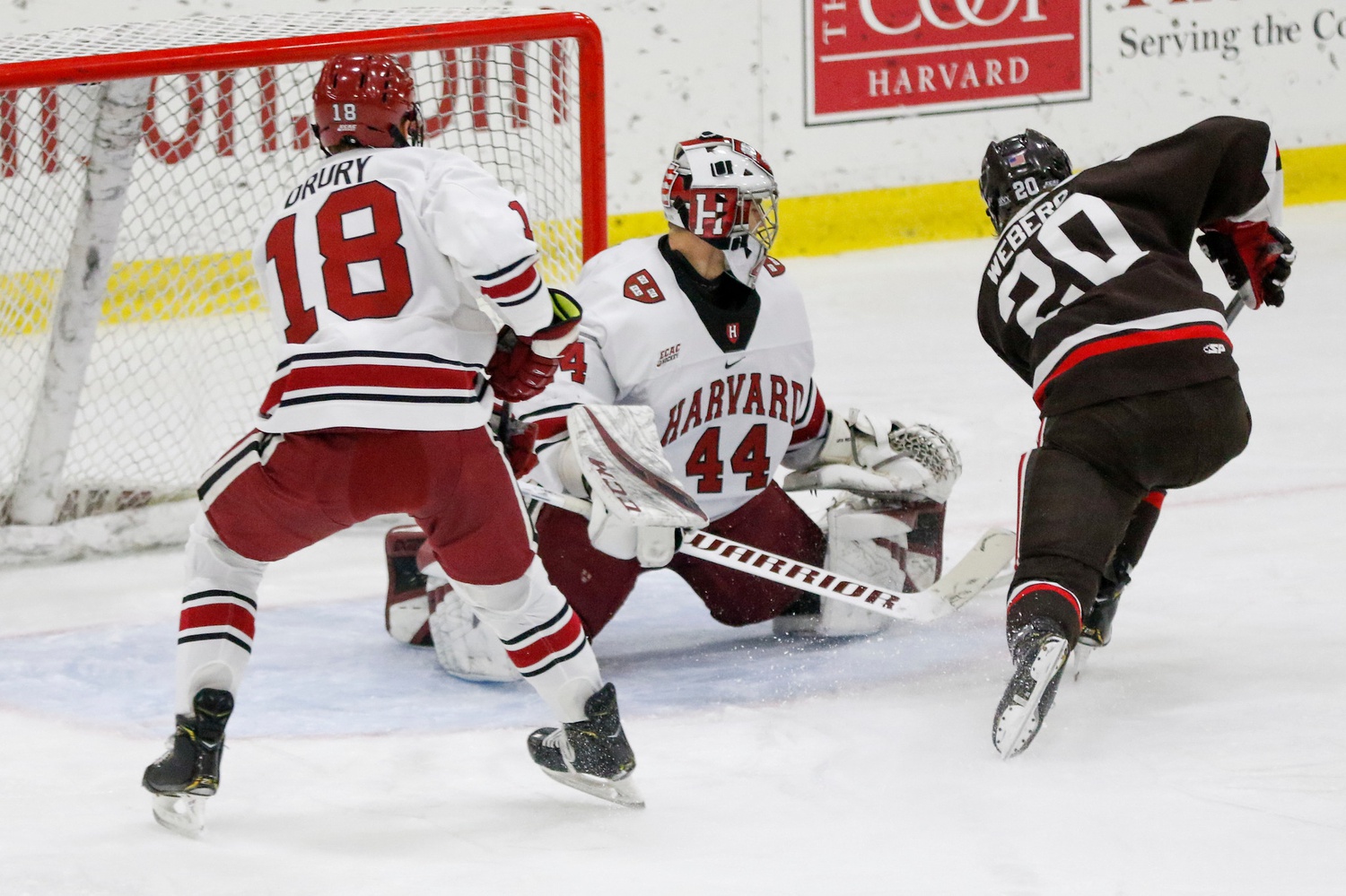 The penalty-shot goal was Gibson’s only blip. His 26 saves, including several crucial stops early in the tilt, earned him his sixth .950-or-better save percentage in a game this year.

For Harvard, a two-point weekend was far from desirable as the conference standings begin to take shape. Nevertheless, next weekend the Crimson, currently ranked fourth in the ECAC, will make its final road trip of the regular season — the famed “North Country” trek.

“Our auto-bid chances are pretty much over,” said Walsh of his group’s path to the NCAA Tournament. “It’s ECAC or bust for us at this point. I think that we have to take that in and look to go to North Country this weekend and get at least three out of four points… to get that top-four bye.”

Points are of the essence as coach Donato’s group vies for a top-four seed and first-round bye in the conference tournament. For an NCAA Tournament berth, Harvard likely needs to rally through the ECAC bracket and bring the Whitelaw Cup home from Lake Placid, N.Y.

“We’re kind of too often one step forward, one step back,” coach Donato said. “When we decide to make the commitment to do all the little things that help you find victory, then we’ll have a better chance at having some consistency.”