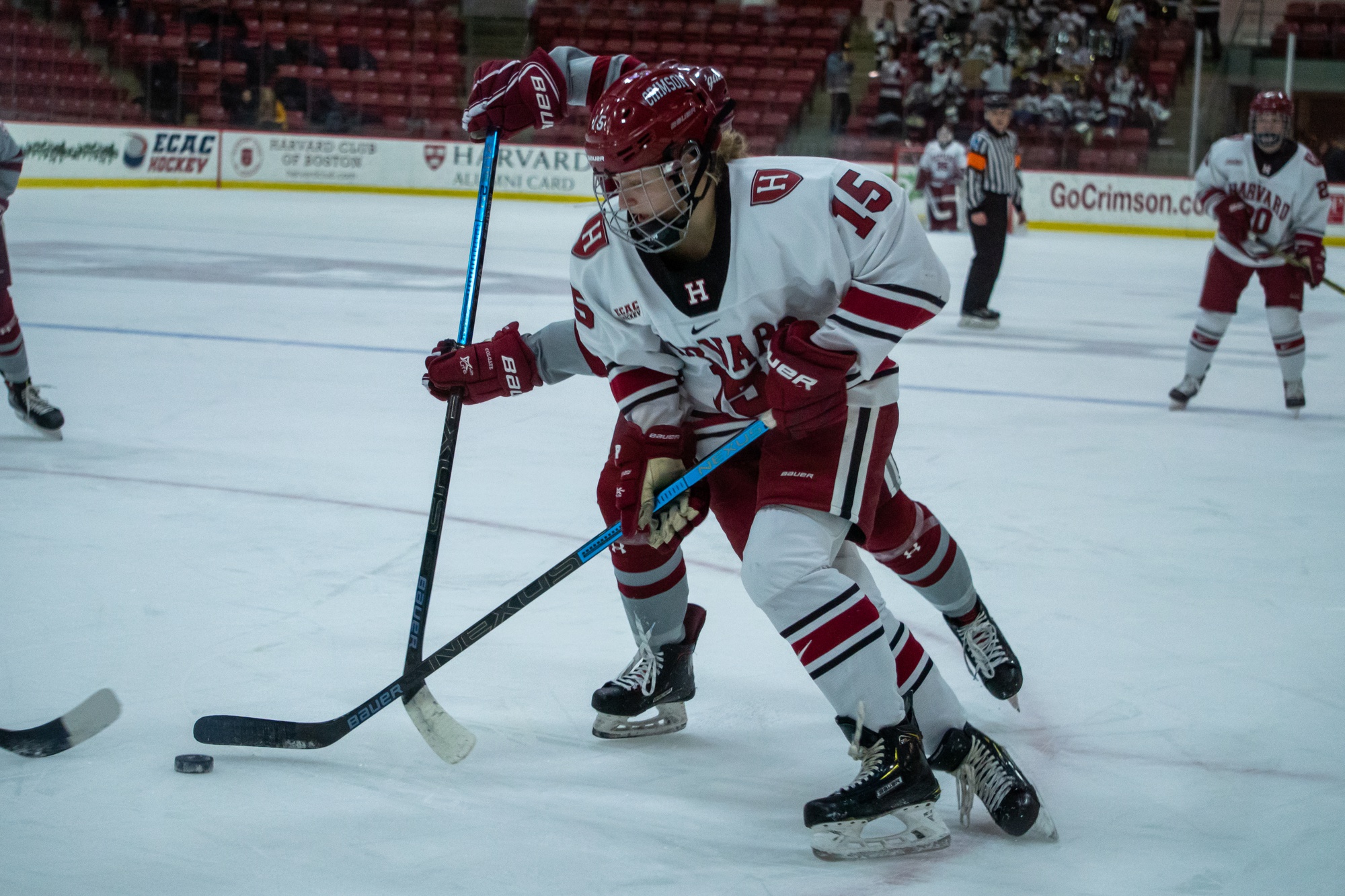 Junior forward Becca Gilmore (above) proved to be a difference maker, leading Harvard with three goals over the two games, including the OT game-winner against Union. By Brendan J. Chapuis
By William C. Boggs, Crimson Staff Writer

Despite having beaten Rensselaer (RPI) and Union by multi-goal margins in January, Harvard faced significant resistance on the road in Upstate New York. Nonetheless, the Crimson (15-11-1, 14-5-1 ECAC) managed to add a third-period insurance goal against the Engineers (0-31-1, 0-20-0 ECAC) and notched a sudden-death overtime winner against the Dutchwomen (5-22-5, 5-12-3 ECAC). The weekend sweep earns Harvard home-ice advantage for the ECAC quarterfinals, but seeding will depend on this upcoming weekend’s games. With a home win against Clarkson this Friday, the Crimson would guarantee at least the three seed, although the two and four seeds will remain in play as well.

As the overtime clock ticked below two minutes, the contest between the Crimson and the Dutchwomen loomed towards a tie. Junior forward Becca Gilmore, however, altered the course of the game with a single snipe 3:01 into the extra session. After digging into the corner for the loose puck, sophomore forward Kristin Della Rovere found Gilmore in the slot, who held, glided for a moment, and ripped the puck under the bar. The moment that the puck hit the back of the net, Harvard skaters streamed onto the ice.

“It was a good feeling. It was definitely a feeling of relief, but also [we were] happy that we could get that win,” sophomore forward Anne Bloomer said. “We were also really excited about the results of that game as it gave us home ice for playoffs… It’s going to be awesome to host that first round here at Harvard.”

Despite the tight finish, the Crimson never actually trailed in the game, although the two teams were deadlocked for much of the third. Union tied the game with 9:18 remaining in regulation, and both teams would trade chances for the last half period, but to no avail for either squad.

“I think that we knew we had the depth, the confidence, [and] the ability to win this game,” Bloomer said. “Both teams got really good looks to the net. We battled hard, and at the end of regulation, we knew that we had been in this situation before… It just took a bit more patience and a couple more minutes to get it done. I think that’s what characterized those last 10 or so minutes. It was battle, but it was also calm and collected confidence.”

Although the scoring slowed down at the end of the third, the first half of the final frame saw frenetic action. Just 27 seconds into the period, the Dutchwomen knotted the game at one. That said, Harvard pulled ahead again just about two and a half minutes later. Then, as mentioned, Union equalized midway through the last period.

Much of the reason that the Crimson could only muster one goal before the third came down to the play of the Dutchwomen’s senior goaltender Amelia Murray, who would finish the afternoon with 46 saves. Gilmore’s game-clincher, however, would spoil the heroic effort from Murray and grant Harvard its 14th league win.

Entering the third period, the Crimson found itself only up by one goal—even though it had earned a 24-9 shots-on-goal advantage in the first two frames. With the game in the balance, however, Della Rovere added some separation that would ice the game. 6:54 into the final stanza, the sophomore forward turned a turnover into a breakaway. Finishing the rush, Della Rovere fired the puck over the outstretched glove of the Engineers’ first-year goalie Ena Nystrøm, giving Harvard the cushion to solidify a win.

“The mentality was to just keep on playing hard,” Bloomer said. “After that third goal, we did have some breathing room, but we didn’t ever want to stop pursuing the net or stop playing defense.”

It is no secret that winless RPI has struggled this season. Nonetheless, the Engineers—who lost 3-0 in their first matchup with the Crimson—have lost 11 games by two goals or less and have never lost by more than five. RPI has remained within striking distance in most of its games, and the trend continued as the team responded to Harvard’s first goal with a second-period equalizer.

“They [RPI] came out right from the start with a bunch of force and an attitude that they were going to be gritty and work as hard as they could to get pucks to the net,” Bloomer said. “They got up for us—they were ready.”

The 1-1 tie game did not last for long, however, as Gilmore—Saturday’s overtime hero—scored the go-ahead goal roughly five minutes later (at the 13:12 mark of the middle frame). Although Della Rovere would capitalize in the third to set the 3-1 final margin, two goals were all that the Crimson would need. Junior goalie Becky Dutton only surrendered one goal on the afternoon, turning away 16 shots in the process. Combined with Saturday’s performance against Union, Dutton earned her fifth win of the year, pushing her record to 5-1 and save percentage to 0.944, albeit in a small sample. With sophomore Lindsay Reed starting the majority of games and senior Beth Larcom appearing five times as well, Harvard has shown remarkable depth at the goaltender position, a trait that should prove critical come playoff time.

“We’re very fortunate here at Harvard to have four really great goalies—people who can step in at any time and fill the role that they need to fill,” Bloomer said. “It’s very reassuring for us. We trust all of our goalies.”