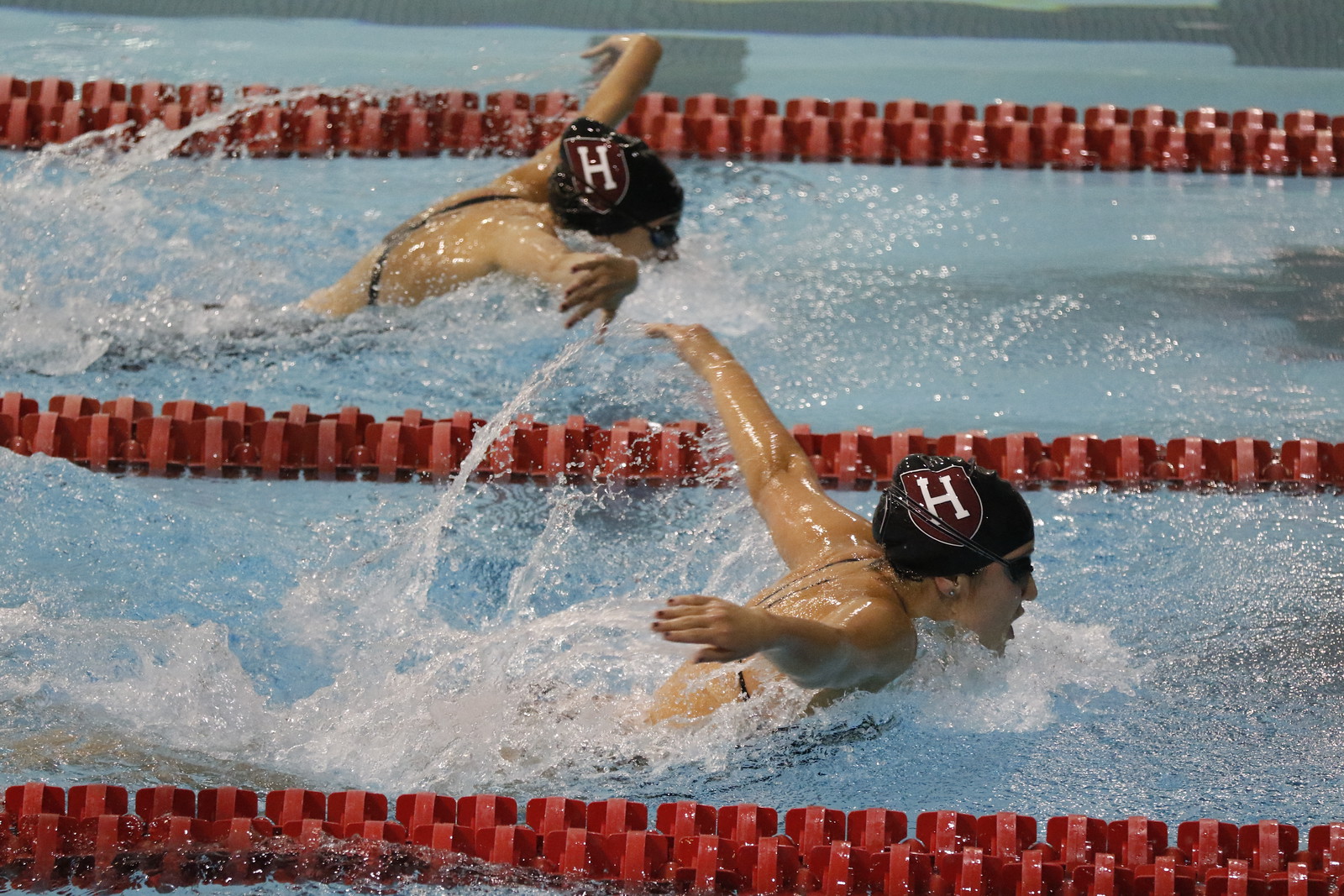 The Harvard women’s swimming and diving team finished the four-day-long Ivy League Championships this past Saturday at the Katherine Moran Coleman Aquatics Center at Brown University. Many program records and several pool records were broken as the Crimson placed second with 1462 points to Princeton with 1569 in the league championship meet.

Right out of the gate, on day one of competition, first-year Felicia Pasadyn, junior Jaycee Yegher, first-year Adaline Rose Bullock, and senior Mei Lynn Colby swam a 1:37.81 for first in the 200-yard medley relay, beating Princeton at the wall by five hundredths of a second and setting a new Harvard program record by two seconds.

Shortly after, one of the highlights of the entire competition occurred in the 800-yard freestyle relay as the Crimson squad — consisting of senior tri-captain Miki Dahlke, sophomore Samantha Shelton, junior Kennidy Quist, and Pasadyn — finished in 6:59.92, putting up the fourth-best time in the nation this season. This earned them an NCAA A-cut qualifying spot, while destroying another program record set two years ago (7:05.06) by more than five seconds — and setting a new Ivy League meet record. It will be the first time since 1998 that a Harvard women’s relay will compete at the NCAA Division I Championship meet.

Reflecting on how hard the quartet trained for the relay, Pasadyn said, “Watching each other come into practice every day with a goal in mind allowed us to have faith in each other when the race rolled around … the race was incredible — I had tears in my eyes seeing that determination and dedication pay off.”

Pasadyn was named one of the three High Point Swimmers of the Meet after continuing to dominate throughout the competition. After day one’s relays, she went on to win the 200-yard IM over Princeton’s Christie Chong by two seconds, setting a program and pool record of 1:55.88. She continued her trips to the podium on day three, winning her second individual Ivy League champion honors in the 400-yard individual medley with a commanding 4:08.47, another pool and program record. On night four, she won her third individual event with a program and Ivy League meet best 1:52.56 in the 200-yard backstroke.

Dahlke also continued to have a fantastic meet, winning the 200-yard butterfly with a program record time of 1:55.51, and taking second in the 500-yard free with a program-best 4:39.30. She then won 100-yard butterfly Ivy League champion honors — in 51.88 — for the third year in a row, beating her own program record by a hundredth of a second, setting a pool record, and earning an NCAA B-cut time. Dahlke was named the Career High Point Swimmer at the end of the meet.

Crimson divers played a key role in the team’s success as sophomore Morgane Herculano placed first with a score of 292.05 points on the 1-meter board. First-years Evie Geier and Elizabeth Miclau also reached the podium, placing sixth and eighth, respectively. Later on, junior diver Georgina Milne won the 3-meter diving title with a season- and career-best score of 323.25. Sophomore Esther Lawrence placed third with 309.70, and first-year Elizabeth Miclau finished fourth with 308.00.

When asked about the season so far, Herculano said, “I performed well in meets, but most of all I have had so much fun at practice every day with my teammates. As a team we’ve all been working really hard at practice, pushing and supporting each other, and I believe that our performance at Ivies reflects that dedication.”

“Qualifying for NCAAs is always a challenge because every year is different,” Herculano said, referencing the different pools and competition. “The main goal was definitely to perform at Ivies, and right now I can only say that I am extremely motivated, and that I am going to continue to work hard this spring.”

While Princeton snapped Harvard’s two-year reign as Ivy League Champions, the Crimson’s future is bright, and the season continues for several swimmers. The NCAA Division I Women’s Swimming and Diving Championships will take place on March 18-21 at the Ramsey Center in Athens, Ga., and several divers will compete at NCAA Zones to qualify for the national meet.

“I can say that our grit and willingness to put in the work for a long term result will not cease because Ivies is over,” Pasadyn said, in reference to the meets ahead. “I am incredibly blessed to attend such a high-level meet with a group of empowering and dedicated women.”