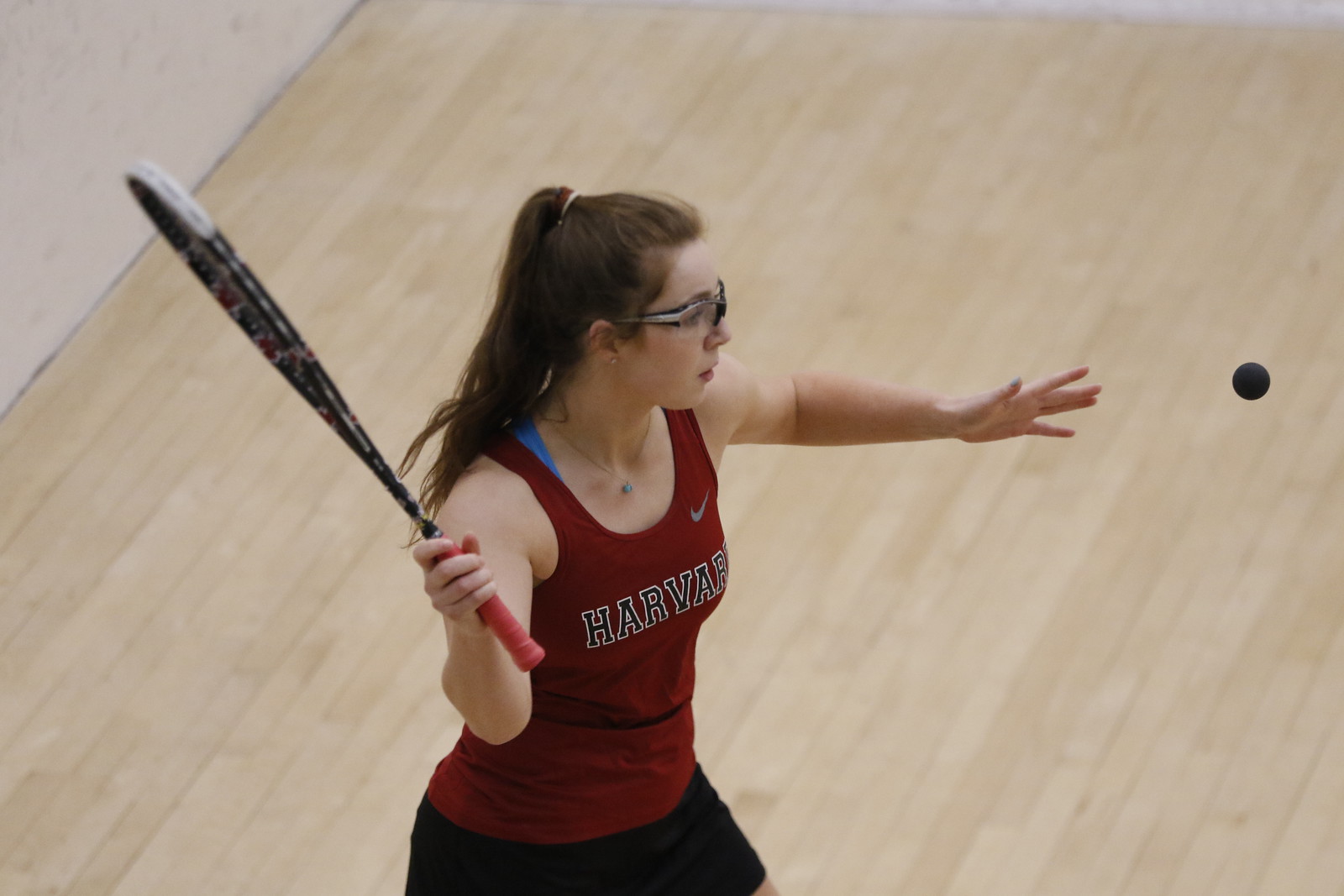 The women's squash team closed out its season with a win over Princeton to take home its sixth-straight national championship. By Timothy R. O'Meara
By Eliot Min, Crimson Staff Writer

After taking a commanding 2-0 game lead against her opponent, No. 2 Princeton University’s Elle Ruggiero, Harvard co-captain Gina Kennedy found herself in a 7-7 deadlock in game three. However, she buckled down and attacked Ruggiero with a flurry of vicious cross-courts and tight drop shots to go up 10-7, eventually winning the game with a backhand drop to secure the critical first-seed matchup for the Crimson.

According to Kennedy, the team’s ability to remain cool amidst high expectations was key to their eventual championship.

“I think we were expected to win,” Kennedy said. “But we're just so humbled by the fact that [we] won. Because we’ve won the last [few] years in a row, there's obviously a lot of pressure to make sure that we will perform our best.”

The team’s relentless work ethic and commitment to practice were also instrumental to its success, according to both Kennedy and Harvard coach Mike Way.

“I'm just so proud of the team because everyone puts in so much work every single day,” Kennedy said. “And [they] always perform so well when it comes to crunch time. So yeah, just really proud and extremely happy right now.”

“You won't find a more proud coach than I am,” Way said. “Of [associate head coach Hameed Ahmed and assistant coach Luke Hammond], the captains, and the whole squad, and the fact that they put up with me and all my repetition, which is what we coaches are about.”

First-year Brittany Sun, who became aware of Harvard’s championship streak while she was in high school, described her first season on the squad — and being a part of the team’s eventual victory — as “surreal.”

“I just heard about Harvard's amazing streak of winning nationals, year after year,” Sun said. “The feeling’s pretty surreal when you're actually on the team [and you] experience it for yourself because you've always read about it and seen it, [but] for the first time you’re actually here to experience it, which is a pretty incredible experience.”

The Crimson faced stiff competition on its path to the championship. Before facing off against Princeton, Harvard had to make its way through the fourth-seed Trinity College Bantams. Although the tough semifinal matchup threatened to throw Harvard off balance, the squad played well and parlayed the momentum into an equally strong performance in the finals match, according to Way.

“I think [playing against Trinity in the semifinals] gave them confidence because they played well,” Way said. “They executed the plan [and] that actually gave them a little boost of confidence for today. So it was good to have a tough match yesterday, and to be tested by Trinity — I think it helped us today.”

With a 3-0 sweep of her opponent to help Harvard claim another title, Kennedy put the final touches on a glittering squash career at Harvard. With her time as a Crimson athlete coming to an end, Kennedy has taken the time to reflect on her experience as a member of the squad, especially as a captain in her final year.

“We just wanted to focus a lot on making sure everyone was clear in the game plan and preparing well,” Kennedy said. “Like I said, everyone's just got such a high work ethic — it was really easy to lead this team.”

This year, Kennedy led the team alongside co-captain Amelia Henley. Kennedy and Henley have been playing squash together since they were both ten years old. They end their time playing alongside each other with four championships in four years.

“We’ve both kind of been on a huge journey with squash together,” Kennedy said. “From playing in the same county when we were younger, coming to Harvard together and then being able to co-captain the Harvard squash team together. It just seemed right and it was the perfect way to end my time on the team.”

As the curtain falls on yet another stellar season by the Crimson, the team looks to the Individual National Championships. In two weeks, six to eight Harvard players will make their way down to the University of Pennsylvania to compete against the nation’s top collegiate players. Draws and tournament information will be released the week of the tournament.

— Staff writer Eliot Min can be reached at eliot.min@thecrimson.com.