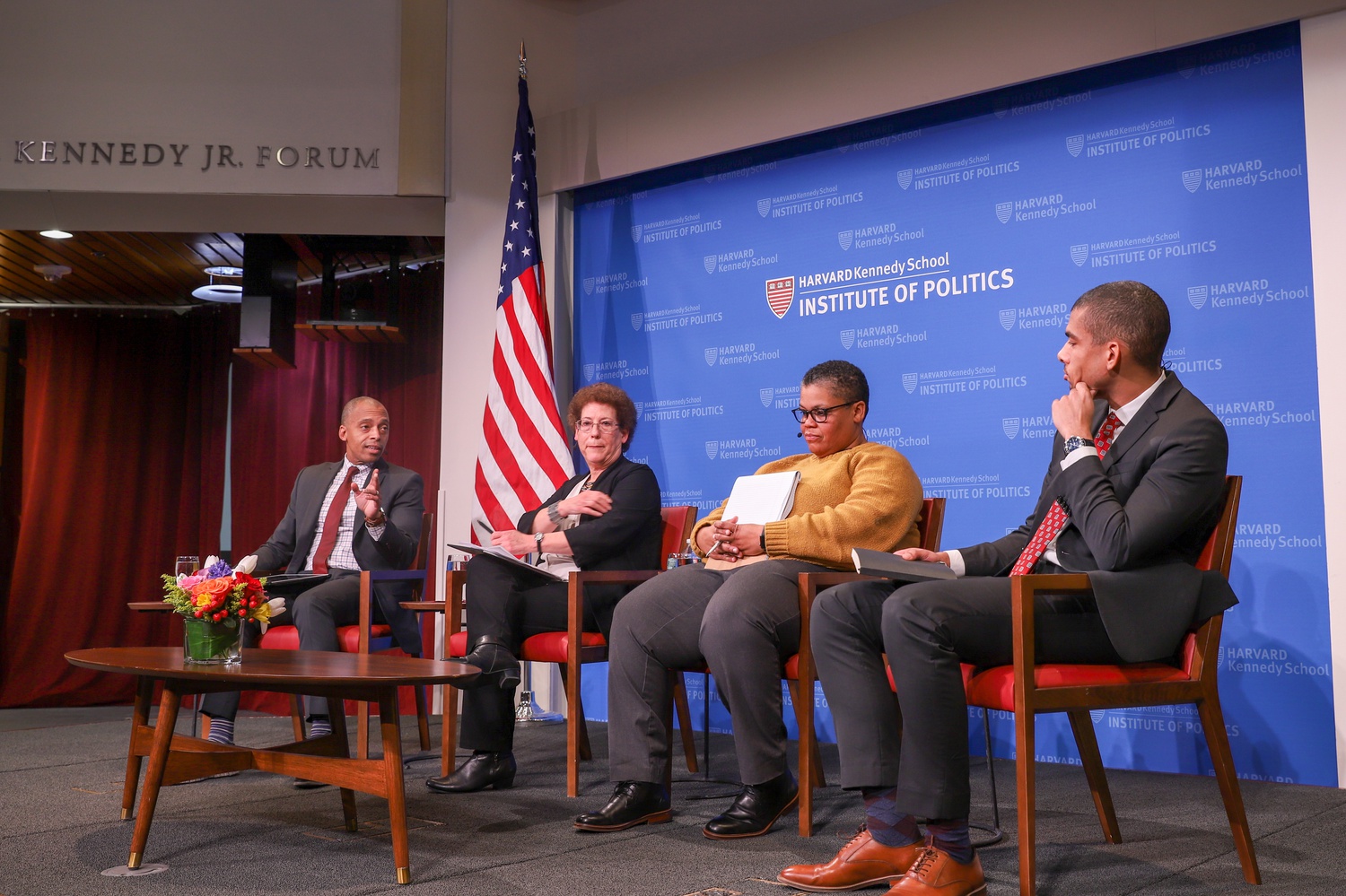 A panel of experts discusses the history and continuing challenges of racism in urban housing at an event at the Institute of Politics Tuesday evening. By MyeongSeo Kim
By Helen He and Alex M. Koller, Contributing Writers

Four experts gathered to discuss the origins and persisting challenges of racism in urban housing policy at a Harvard Institute of Politics forum Tuesday evening.

Khalil Gibran Muhammad, a professor of History, Race, and Public Policy at the Harvard Kennedy School, moderated the event. Panelists included Keeanga-Yamahtta Taylor, an assistant professor of African American studies at Princeton University; David A. Williams ’07, the policy director at Opportunity Insights, a Harvard-based research and policy lab; and Lizabeth A. Cohen, a Harvard History professor.

The speakers explained the influence of the private sector — specifically the real estate industry — in shaping housing policies that, according to Taylor, enabled “the racial marginalization of non-white people.” They argued that the government must intervene to address national housing issues, rather than defer to the interests of the private sector.

“In order to actually match the scale of the crisis, we have to embrace the language of entitlement and the idea that the state has a role to play, and we cannot defer that responsibility to a real estate industry, to a banking industry, whose entire history is wound up in white supremacy and racial discrimination that have created these problems that we are living with now,” Taylor said.

“As early as 1924, the National Association of Real Estate boards had already made it a rule that any realtor who introduced someone of a different race into a racially homogenous neighborhood would lose their license,” Taylor said.

“These are the people who were recruited into [President Franklin Delano] Roosevelt's federal housing administration to help shape the first federal laws regarding housing policy and home ownership in particular. So they bring with them their ‘expertise’ in segregregation,” she added.

Later in the discussion, Muhammad asked Williams if determining the causes of housing segregation is an “open-ended question” for his team at Opportunity Insights.

“Interrogating those questions, I think is really important to understand, well-intentioned or not, what are the implications of the policy choices we’re actually making,” Williams said.

“This isn’t going to solve the entire issue. Most families who qualify for Section 8 still don’t receive those vouchers because there isn’t enough funding for it,” Williams said. “But I think there’s something about actually providing services that can help navigate some of the systemic barriers that we’ve seen because of our history, and I think that does give some kind of optimism moving forward.”