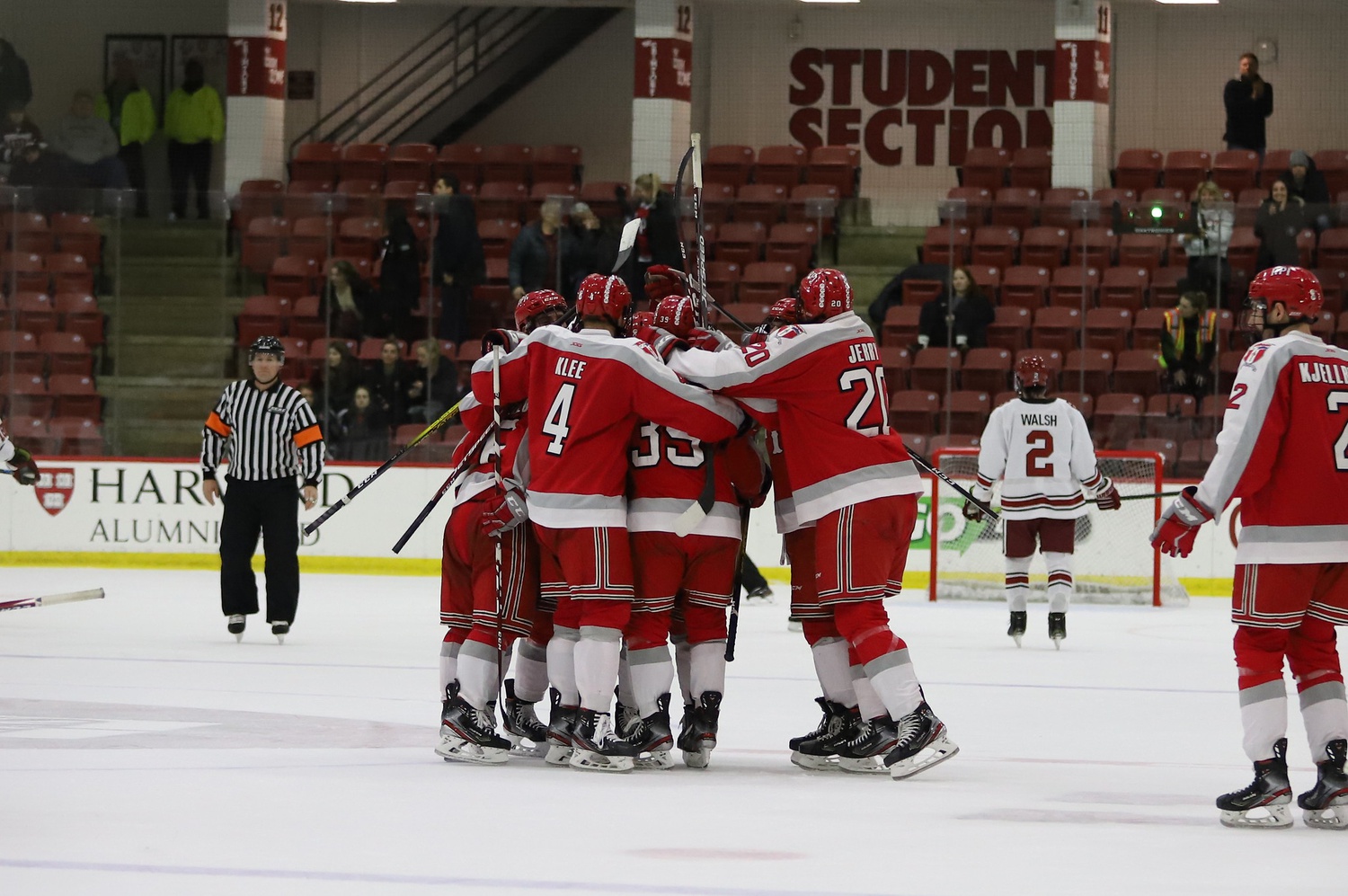 RPI's Cory Babichuk potted the game-winning goal in the first minute of the middle stanza. By Owen A. Berger
By Jasper G. Goodman, Crimson Staff Writer

For much of the 2019-20 season, the Harvard men’s hockey team has relied on its nation-best powerplay to carry it.

But with a chance to score the game-tying goal in the final minutes of the third period on Friday, Harvard’s man advantage failed to come through when it was needed most.

“I thought it was a hard-fought game,” Harvard coach Ted Donato ’91 said. “I thought [RPI] did a good job defending the hard areas of the ice. I thought through the first 40 minutes, we didn’t win enough puck battles to be able to possess the puck and sustain offense and challenge the tougher areas of the ice.”

The loss marks the first time the Crimson has been blanked this season after the 2018-2019 campaign ended in a shutout defeat to then-No. 3 Massachusetts in the NCAA Tournament’s regional semifinal. It is the program’s first goalless game at home since Jan. 27, 2018.

RPI got on the board early when Engineers defenseman Cory Babichuk scored the game-winning goal on a power play in the first minute of the second frame. The freshman collected a pass just inside the blue line from senior Chase Zieky and fired a shot through traffic that snuck past goalie Mitchell Gibson (1 GA, .957 SV%).

The Engineers’ second tally of the game came with zeros on the clock when sophomore Ture Linden fired a shot past multiple lines to score on Harvard’s empty net. 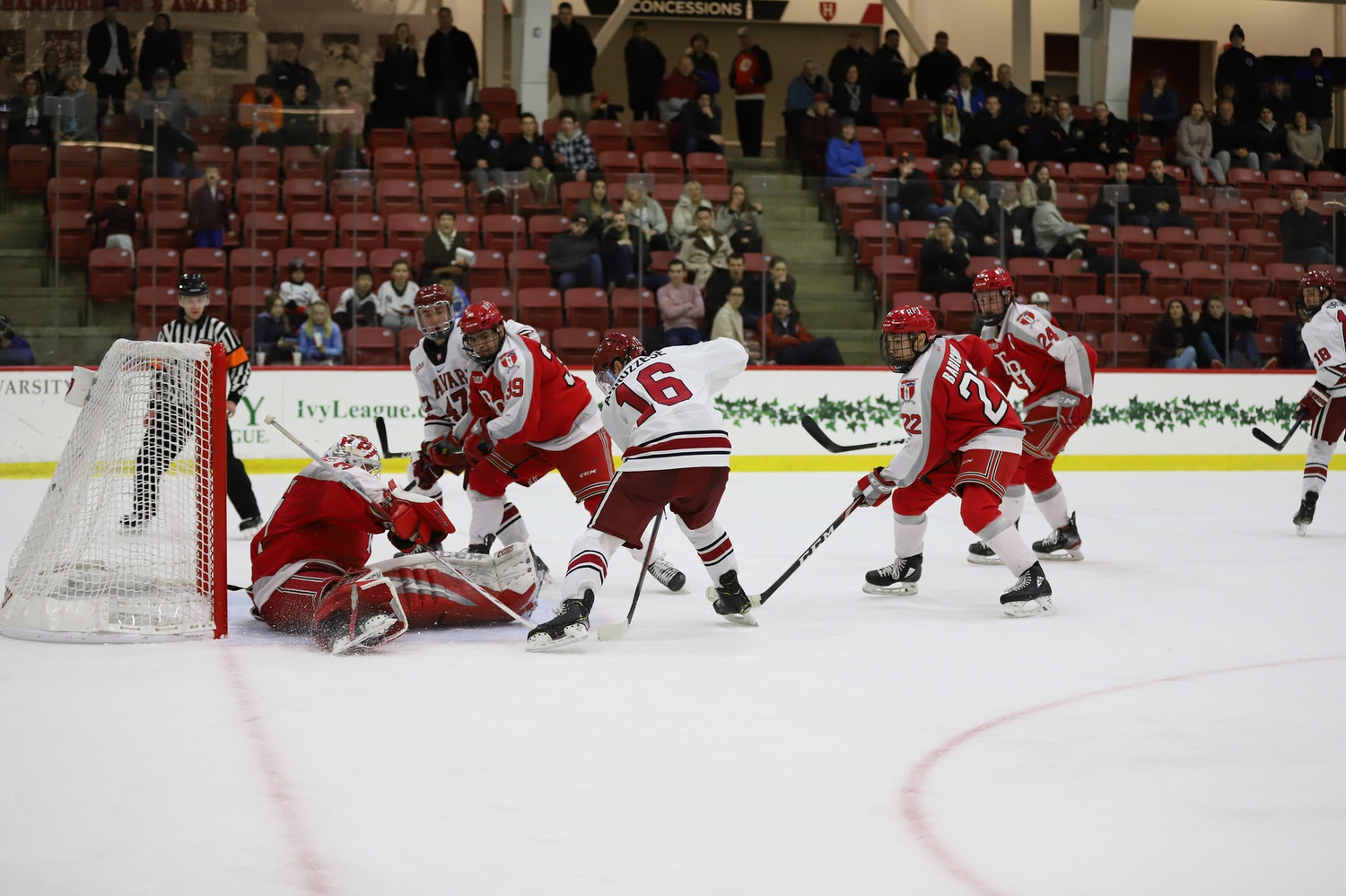 Engineers net-minder Owen Savory posted his fifth shutout of the season in a critical game for both teams. By Owen A. Berger

With under three minutes to go in the contest, the Crimson had a golden opportunity to score an equalizer when RPI freshman Simon Kjellberg was whistled for slashing, sending the Crimson to the man advantage. Harvard rattled off six shots on the powerplay including four with six skaters after Gibson was pulled. But the Crimson was unable to convert.

“We know that special teams has been one of our strong suits, so we were confident going into it,” Harvard sophomore Jack Rathbone said. “We were definitely able to make some plays, [we] just we needed one more play. And I think it wasn’t for lack of effort.”

The Crimson’s first grade-A chance of the game came in the form of a breakaway midway through the first period. Rathbone, a defenseman, broke free of a pair of RPI skaters and made a move to the left side of the net, but Rensselaer goalie Owen Savory (0 GA, 1.000 SV%) made a sprawling save with his right skate to keep the puck out.

Savory made 29 saves Friday. The Crimson peppered him with 21 shots in the latter two periods of the contest, but the sophomore turned all of them away to keep Harvard off the board.

“In the third period, we made a push,” coach Donato said. “At this time of year, it doesn’t take much — a little bit of a seeing-eye goal on their power play goal to give them the lead. I thought we pushed in the third, [and] had some chances throughout the game. Their goalie made the big saves when he needed to.” 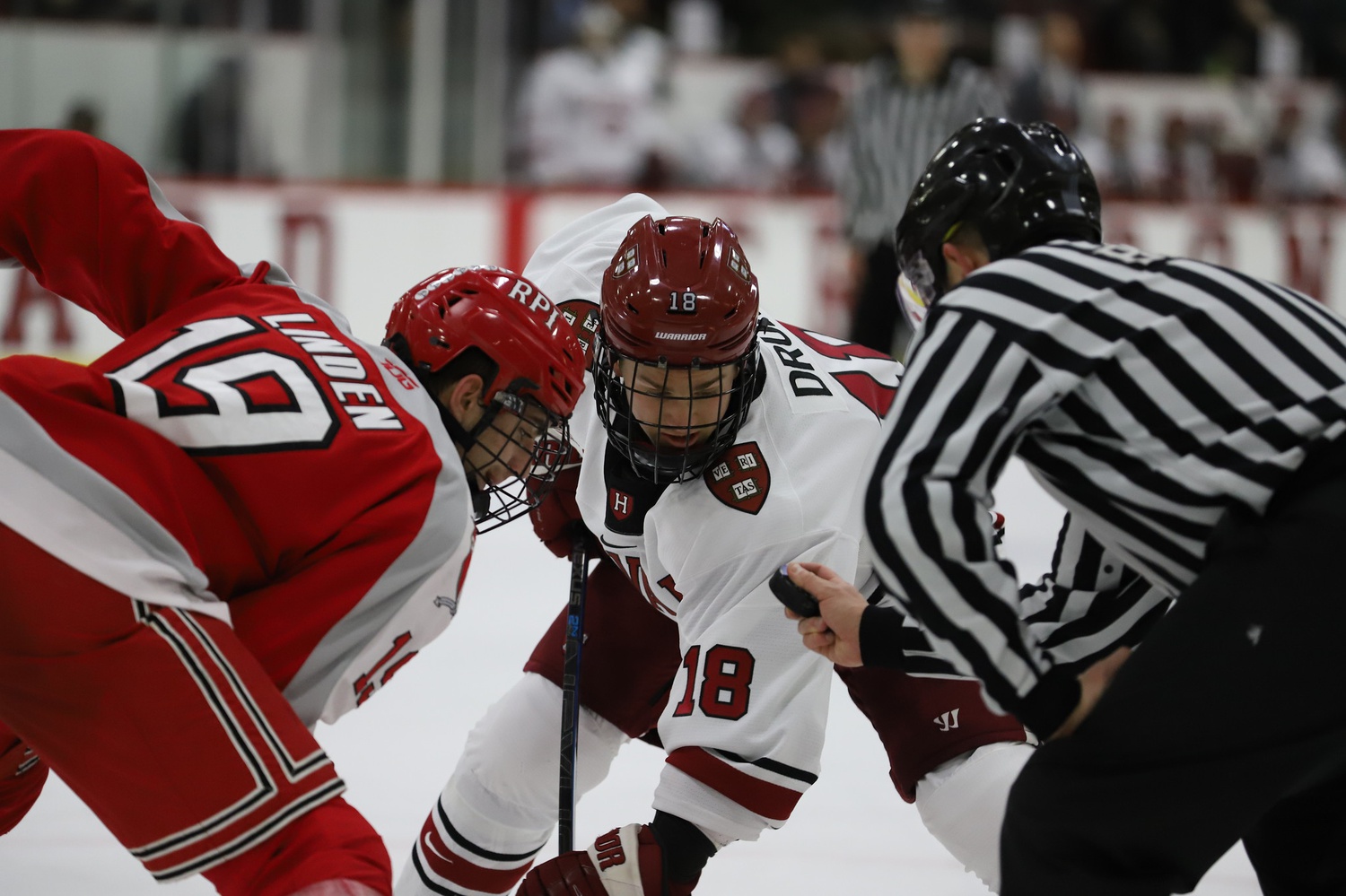 The Crimson squared off against the Engineers with its destiny at its finger tips on Friday. Alas, Harvard now relies on Dartmouth to take at least a point from RPI on Saturday in order for it to lock up a top-four ECAC finish. By Owen A. Berger

The clean sheet is Savory’s fifth of the season and second in three outings, following a 4-0 decision over now-No. 17 Quinnipiac.

“The message in the room after tonight with Coach was just: The margin is so small when you get to this late in the season,” Rathbone said.

Gibson made several crucial saves late in the second period to keep the contest a one-goal affair. RPI defenseman Jake Johnson ripped a blistering one-timer off of a pad save by Gibson, but the Harvard netminder turned it away.

Harvard skated on the man advantage for under three minutes Friday and went 0-for-2 on the powerplay. It marks just the sixth time this season that the Crimson has not scored a powerplay goal.

“I’m not sure we had the intensity levels necessary to draw penalties in the tough areas of the ice tonight,” coach Donato said.

The pressure is now on Harvard to leaveSaturday’s senior-night contest victorious over Union. A win against the Dutchmen would help Harvard’s chances at securing a coveted top-four finish, but it would not be the only necessary outcome.

Because of Friday’s result, RPI now definitively owns the tie-breaker over the Crimson due to its superior number of conference wins (12 compared to 10, as of Friday night). Harvard is hoping for Dartmouth to take at least one point from the Engineers on Saturday — the only scenario in which the Crimson would still be eligible to finish ahead of RPI.

Despite entering its Friday clash with the Engineers in control of its own first-round fate, Harvard no longer has that privilege with one game to go on the 2019-2020 docket.

“We’ve got to take care of business against Union,” Rathbone said.