No. 17 Men's Hockey Falls to No. 12 Northeastern in Beanpot Semifinal

Though the Crimson scored the first goal, defending champions Northeastern overcame a deficit to earn a place in the Beanpot final.
By Stuti R. Telidevara 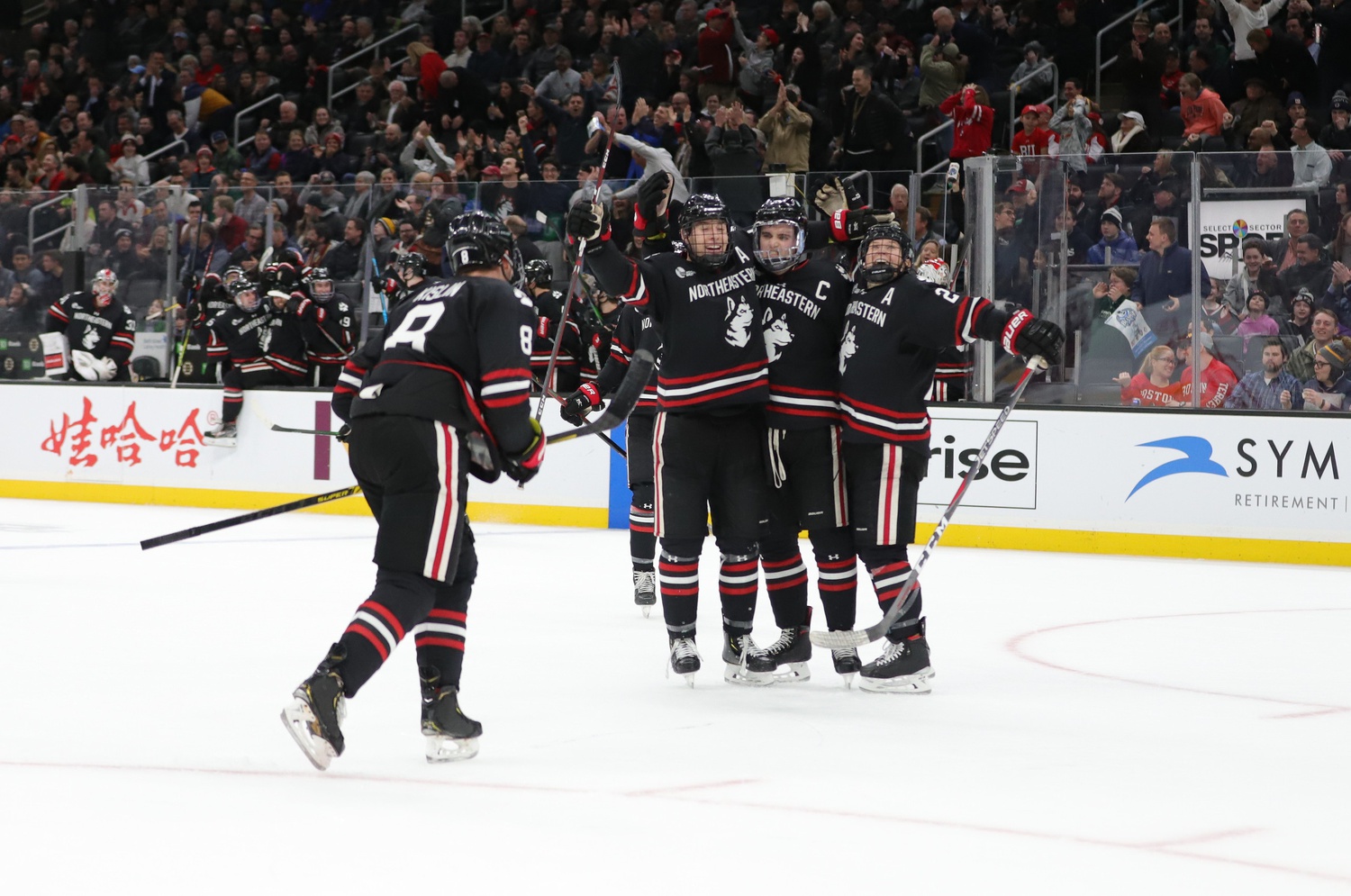 Shortly before the second-period horn, the Huskies pulled ahead courtesy of a nice behind-the-net feed. By Owen A. Berger

BOSTON — The No. 17 Harvard men’s hockey team began its 68th Beanpot tournament run against No. 12 Northeastern, a matchup that tends to feel more like a Huskies home game than one played on neutral ice. The last time these two teams faced off, in 2017, the Crimson overcame a late Northeastern push to secure a championship game bid, which it then won.

Harvard fans watching for a repeat occurrence would look in vain, however. The Huskies (15-7-2, 8-6-1 HEA) shut down the Crimson (10-7-4, 8-4-3 ECAC) and its powerplay when it mattered most for a 3-1 win. Northeastern will head to the finals looking to capture a third straight Beanpot title next week. Harvard’s lone goal-scorer was sophomore forward Jack Drury; his 14th of the year will be cold comfort as the Crimson heads to the consolation game instead.

“Obviously, it was a hard-fought game,” head coach Ted Donato ’91 said. “Ultimately, they made one more play than we did. We had our chances… I thought [Northeastern graduate-student net-minder Craig] Pantano made some big saves in the second half of the game. I thought our execution wasn’t great.” 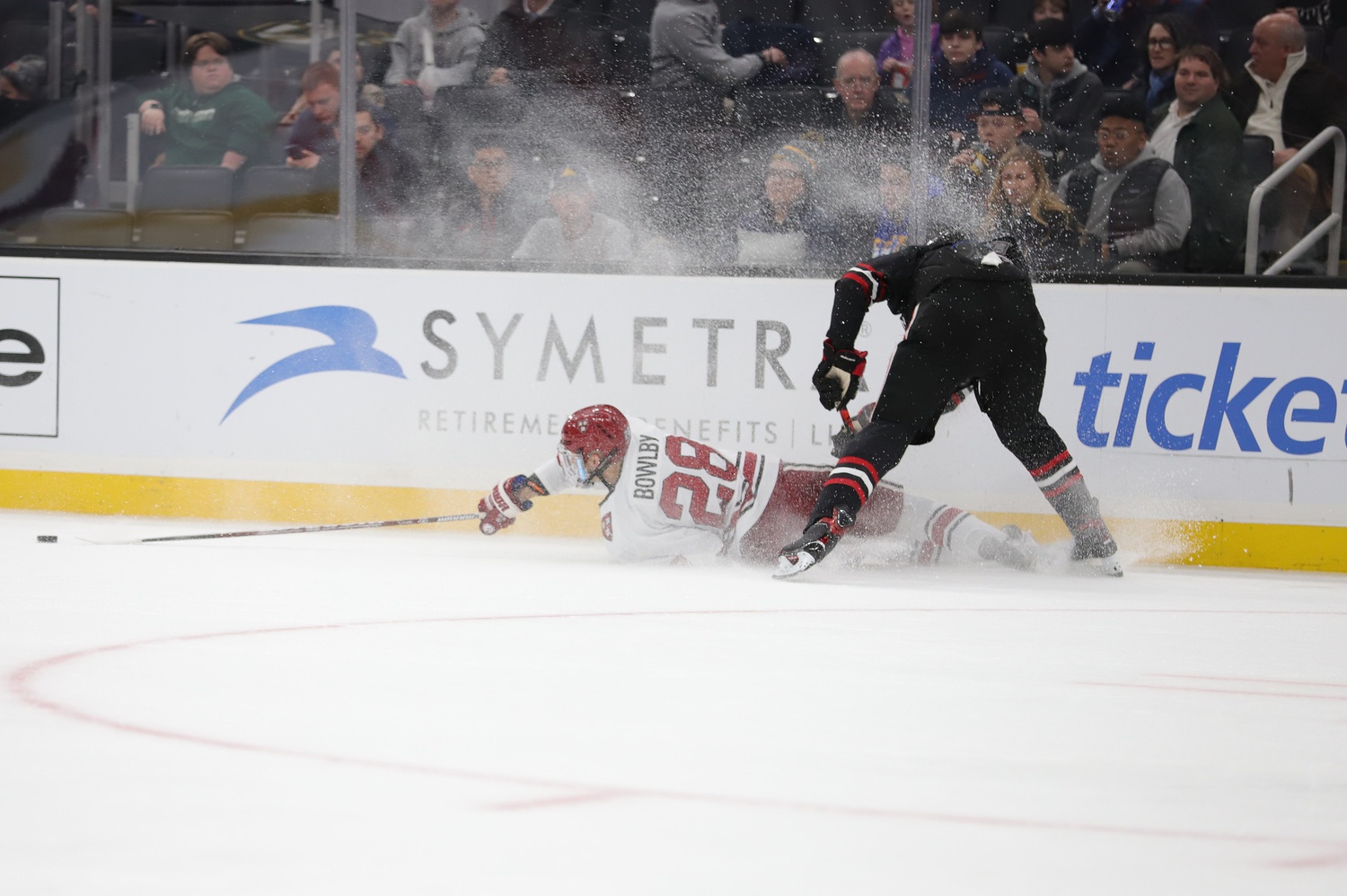 Despite an aggressive third frame that saw the Crimson earn a sizable shot advantage (14-7), Harvard could not rally from down a goal. By Owen A. Berger

Not long into the first, Harvard had its first powerplay opportunity, touching off a battle of the special teams giants. Entering into Monday’s game, the Huskies had the nation’s fourth-ranked penalty kill (89.2%), while the Crimson brought the country’s top powerplay unit (30.7%). Northeastern’s unit kept the Harvard skaters to the perimeter for the start of the penalty, disrupting passes in key areas.

Then freshman forward Nick Abruzzese found sophomore linemate Jack Drury at the goal mouth. Rather than continuing to cycle the puck, Drury spun around and roofed it over the right shoulder of graduate student net-minder Craig Pantano.

Drury’s tally is the latest in a nine-game scoring streak, over the course of which he has 18 points to his name. The score also marked the first time the Crimson has broken the ice in its Beanpot semifinal since its 2017 championship run.

Harvard held onto its early lead for less than seven minutes. The special teams statistics weren’t nearly as impressive the other way — the Huskies came in with a 21.2 percent strike rate on the man-advantage, while the Crimson held a penalty-kill efficiency of 80.8%. 22 seconds into the penalty, Northeastern captain Ryan Shea fired a shot from the blue line, and junior forward Zach Solow tipped it past Harvard rookie goaltender Mitchell Gibson to tie the contest.

“We had a bend, don’t break mentality, and it served us well,” said Northeastern head coach Jim Madigan. 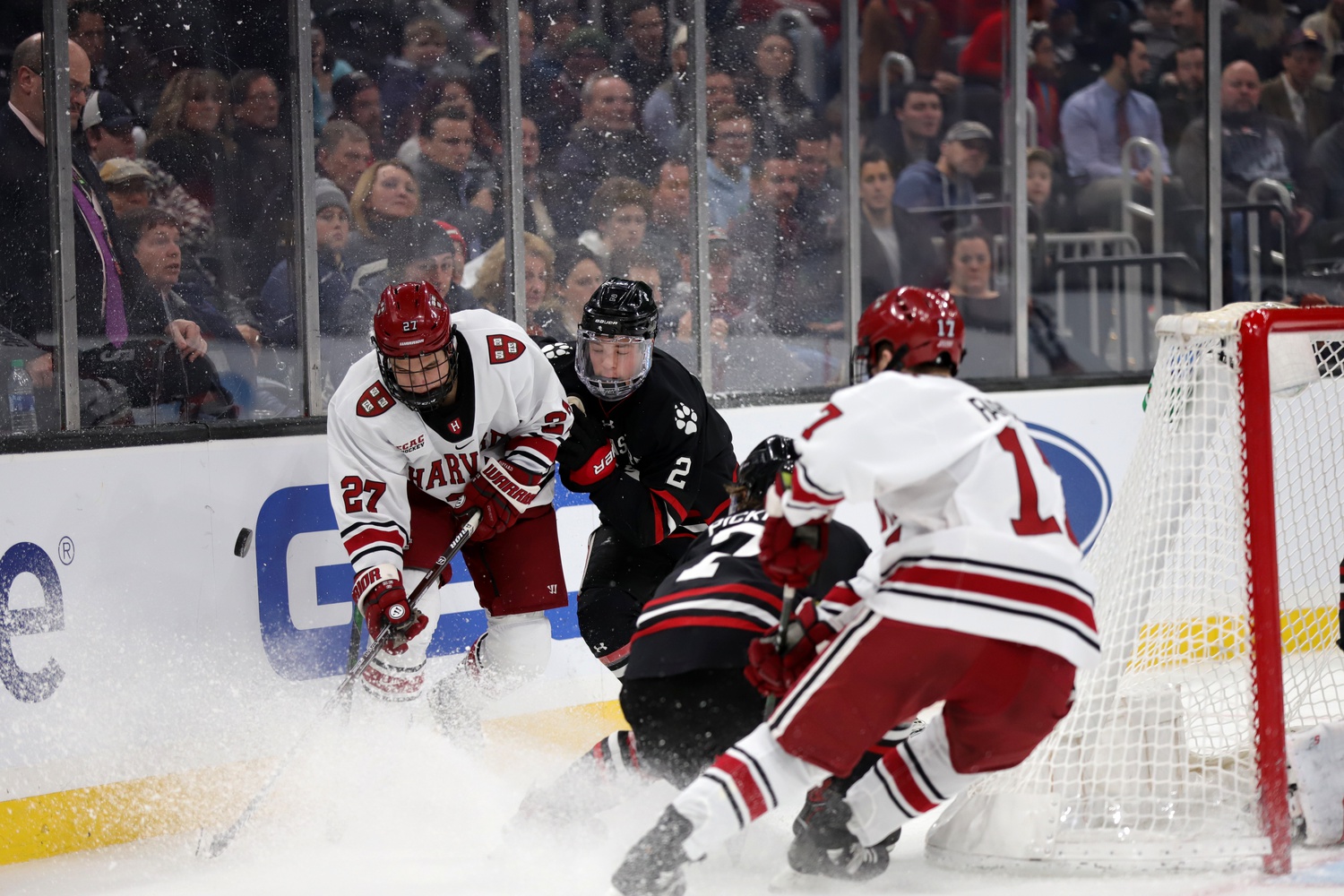 First-year forward Austin Wong of Harvard fights to maintain possession behind the net amid pressure from Huskies sophomore defenseman Jordan Harris. By Owen A. Berger

The teams continued to trade chances through the opening frame; the score, however, remained a 1-1 stalemate. Though the Huskies had outshot the Crimson, 13-6, in the period, Harvard had seen a solid offensive push towards the end of the first.

In the middle frame, Harvard managed more zone time and more possession. Indeed, the squad would end up outshooting Northeastern, 8-4, in those 20 minutes, bringing the overall shot differential much closer. At the same time, the Huskies’ fewer shots were high-quality chances; Gibson had to remain sharp to keep the score even. In a game with few whistles overall, Harvard incurred two penalties in the second — infractions that would cost the team before the second intermission.

Harvard’s first second-period penalty kill went far better than its earlier man-down play. The Huskies had little time and space in the offensive zone, and critical clears allowed Harvard to escape unscathed. A late-period penalty, however, undid the effects of that kill and Harvard’s own offensive time.

With time nearly expiring on the powerplay, Northeastern rookie forward Riley Hughes collected the puck behind the goal line and tossed it in front of Gibson. While the net-minder stopped senior forward Grant Jozefek’s stuff attempt, senior Brendan van Riemsdyk picked up the change and found the back of the net.

“We should’ve had [the goal mouth] covered,” coach Donato said. “It was the end of the powerplay, but we’d got our fifth guy on the ice, so we really had no reason not to have the front of the net covered. We weren’t in penalty-killing mode.”

Van Riemsdyk’s second goal of the season put his team up 2-1 with only 30 seconds left in the frame. A last-second powerplay for Harvard was poor consolation. When the teams returned to the ice, though, the refs whistled the Huskies for hitting from behind, giving Harvard a golden 5-on-3 opportunity. 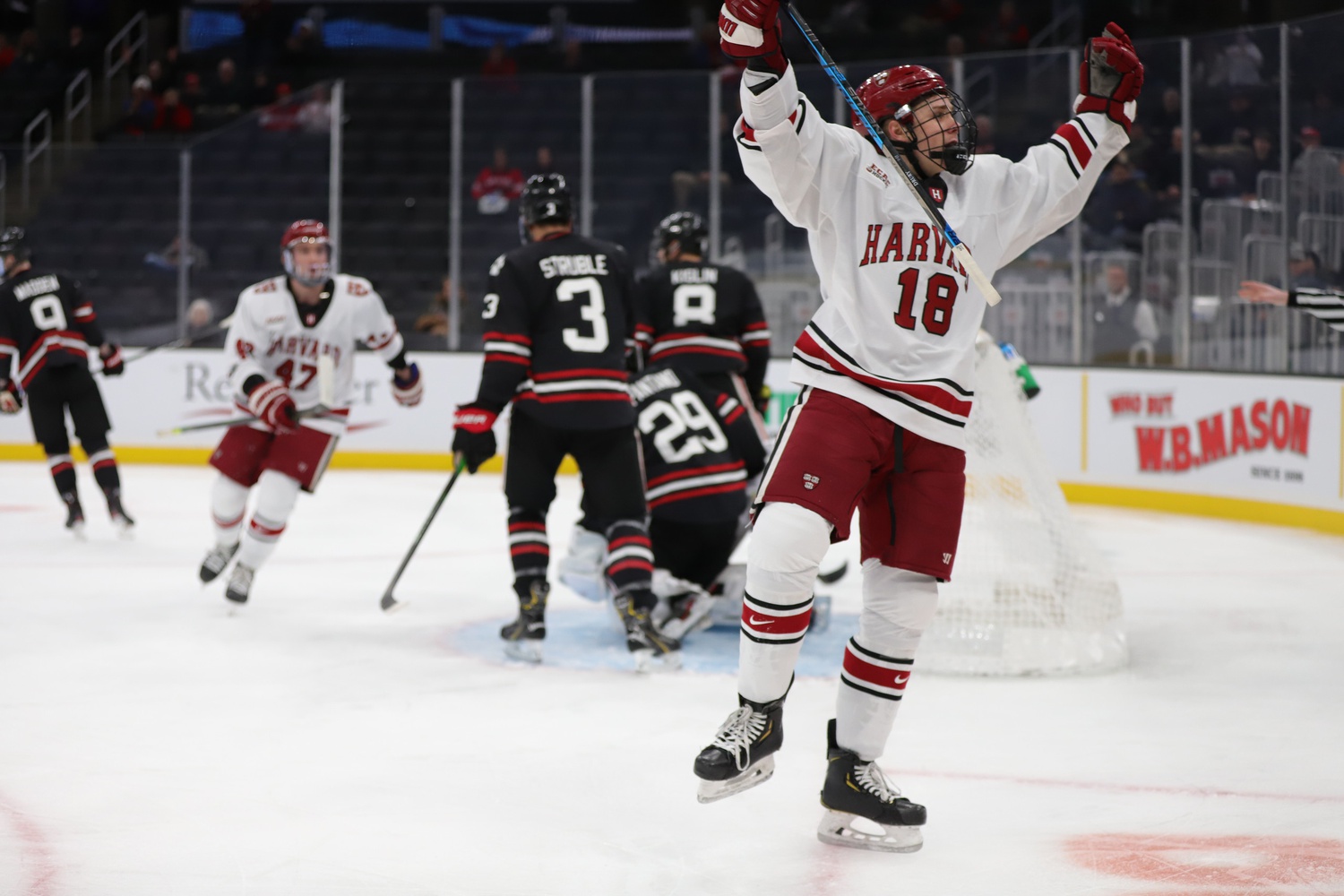 Sophomore center Jack Drury continued his stretch of impactful play, extending his point streak to nine games (10–8—18 in that time) with a powerplay goal in close. By Owen A. Berger

But the NCAA’s best man-advantage unit was overcome here by Northeastern’s shutdown penalty kill. To the delight of the raucous Huskies student section, Harvard could not capitalize on its chances — much as the story had been in the second.

“We had some hesitancy to shoot the puck,” said captain Nathan Krusko of the powerplay. “I felt like as the game went on we were very reluctant to take pucks to the hard areas…. We had some good looks [and] we can tip our hats to the goalie, but we have to find ways to cash in if we want to win those big games.”

Around the halfway mark of the period, Harvard’s desperation spiked, and the team threw everything and the kitchen sink at Pantano’s net. Harvard attempted 31 shots in that frame, half of which were on target and gobbled up by the net-minder. In contrast, the Huskies attempted just 11, preferring to crowd their own zone to protect their lead.

Several of those Harvard chances were a hair’s breadth away from goals — sophomore Casey Dornbach shot into a defenseman’s skates at the side of the cage, and, on another occasion, threw the puck behind Pantano through the blue paint. Sophomore Jack Rathbone, returning from injury, beat Pantano on a wrap-around try but once again, the puck did not cross the goal line.

The action wasn’t only at the Northeastern end of the ice. The Huskies had some grade-A opportunities of their own, but Gibson turned away all the pucks he faced in the final frame, giving his team another boost in its quest for a comeback. 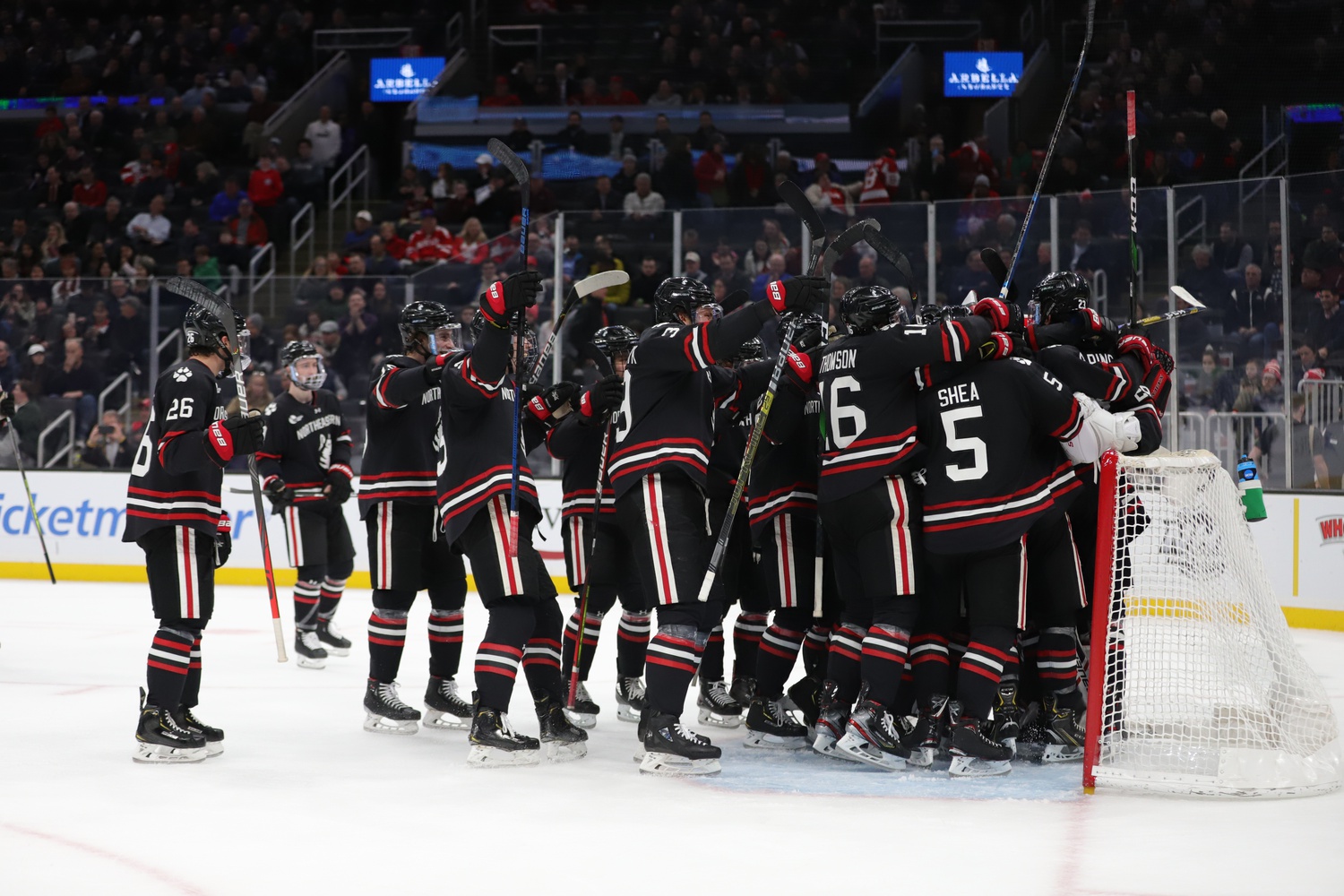 Northeastern celebrates the 3-1 victory after icing the game with a long-range empty netter in the final minute. By Owen A. Berger

With two minutes left in regulation, Harvard pulled Gibson in favor of rookie forward John Farinacci in the hopes of finding that elusive tying goal. As with the 5-on-3, however, Northeastern broke up plays in key areas and largely neutralized Harvard’s offensive threats.

The dagger came with less than a minute left. Blocking a shot in his own zone, Shea flipped the puck towards Harvard’s empty net. The rolling biscuit only just made it into the cage, padding the Huskies’ lead and effectively ending Harvard’s chances.

“Honestly, I wasn’t shooting for the net,” Shea said. “I kind of just flipped it out just to...regroup, but it caught [an] edge a little bit… Once it went in, I was like, ‘Here we go, we’re going back to the championship.’”

Harvard had played 10 of the previous 11 Beanpot consolation games heading into Monday’s matchup — and, unfortunately for the team, it will play another come next week. The last Harvard class that has won a Beanpot title will graduate this spring, and fans will have to set their sights on next year’s Boston hockey classic.