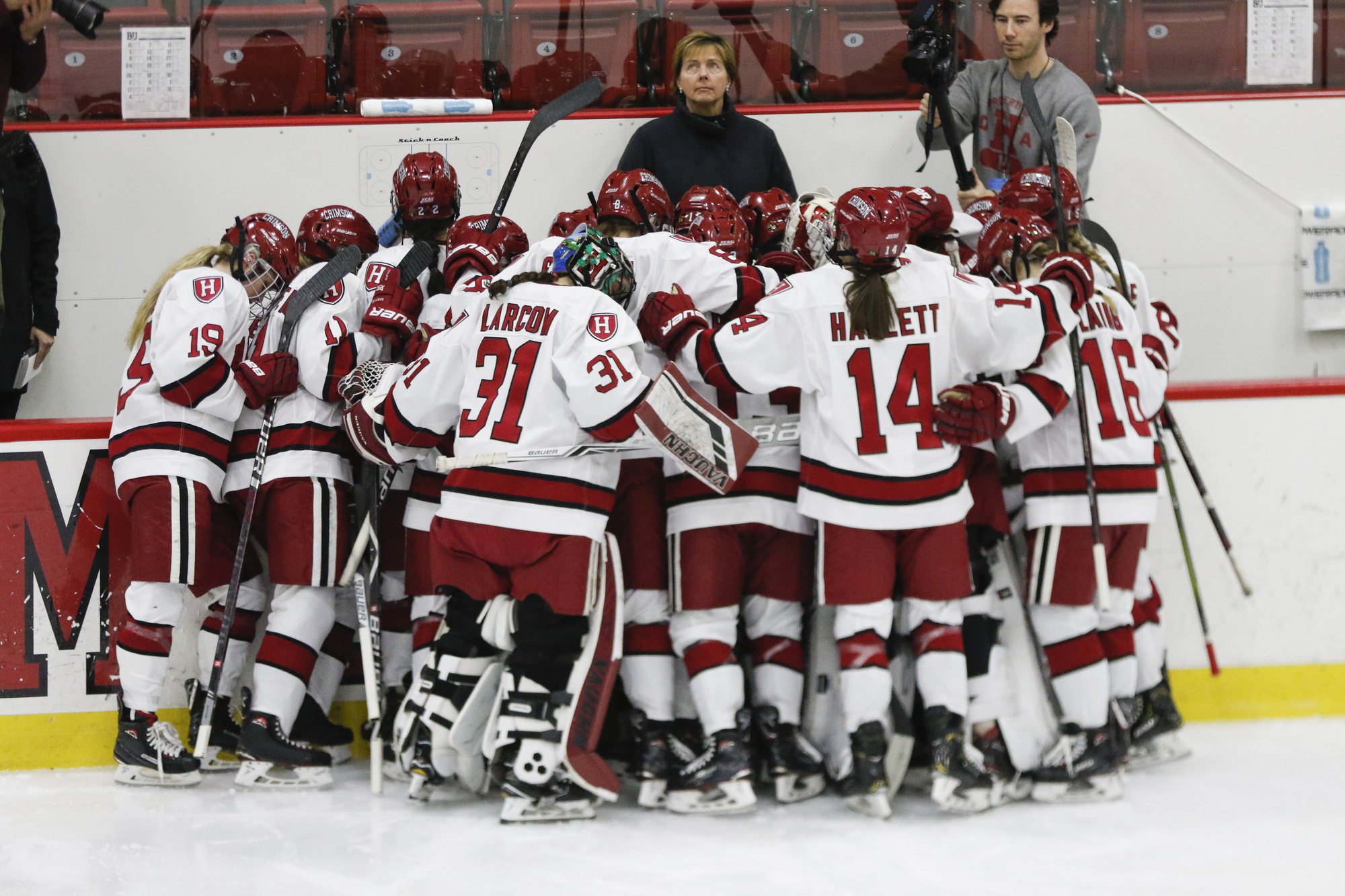 Harvard huddles during its 2019 Beanpot finals appearance against Boston University. This year, however, the Crimson will not have the chance to avenge its overtime loss to the Terriers, falling in the 2020 semifinals. By Timothy R. O'Meara
By William C. Boggs and Isabel A Levin, Crimson Staff Writers

BOSTON — With under three minutes left in the first semifinal of the 2020 Beanpot, No. 10/10 Harvard had managed to keep the deficit at 2-1 against No. 3/2 Northeastern. The Crimson defense and its junior goaltender Becky Dutton had faced many close calls from the Huskies attack—notably a puck off the post in the third and a series of key saves from Dutton—but seemed to maintain a “bend don’t break” attitude.

After keeping the game within one, Harvard received a critical opportunity to score when Northeastern defender Lauren MacInnis headed to the penalty box for checking with 2:48 left to play. However, the power play whittled away without the puck finding the net. As the Huskies completed the penalty kill, the Crimson tried its luck at a six-on-five by pulling Dutton for the extra skater. Just as Harvard (11-9-1, 10-4-1 ECAC) had stood up to the Northeastern (24-3-1, 20-2-0 HEAW) pressure, so too did the Huskies against the Crimson’s final rally. Soon after Dutton exited the goal, Northeastern junior forward Tessa Ward jumped out to a breakaway, sealing the Huskies’ victory with a quick empty-netter in the final 12 seconds of play.

“I actually think that power play at the end of the game hurt us. Based on where we are with our line up right now and how we’ve tweaked some things around to fill some holes, we might’ve been in a better position to go five, just with regular lines and add another attacker, keep[ing] our defensemen the way they were on the blue line,” Harvard coach Katey Stone said. “We gave up a lot of space on the blue line as a result.”

Despite the frenetic finish, the game did not necessarily open with the same drama. For the better part of the first period, long stretches of continuous play produced few high-profile scoring chances. For the Crimson, the absence of sophomore forward Dominique Petrie, the team leader in points this season, undoubtedly complicated its offensive game plan. Momentum shifted drastically, however, when Northeastern capitalized off of a key Harvard mistake. With control of the puck in its own zone, the Crimson attempted a clearing pass that was intercepted by Huskies sophomore forward Alina Mueller. Building speed after the interception, Mueller managed to convert the turnover into a rush and top-corner finish to put Northeastern up 1-0.

“It was definitely a really even game, and both teams were just waiting for each other to make a mistake and to capitalize on that, so I’ve got to give credit to Northeastern for seeing that play develop and putting the puck away,” said co-captain and forward Kat Hughes. “But I think our team is incredibly resilient, and we didn’t let that get us down even though it was near the end of the period.”

Harvard would have to show that resilience not long into the second period when the Huskies widened their lead to 2-0. Northeastern junior defender Skylar Fontaine swiped a shot from the high slot, and the puck found its way through traffic before settling in the back of the net. Soon after the goal, the Crimson headed to the box on a checking minor from first-year forward Courtney Hyland. With the Huskies having just taken charge of the game’s momentum, the subsequent penalty would prove critical. A Northeastern goal could put the game out of reach for Harvard, but a successful kill could turn the tide back in the Crimson’s favor. Ultimately, the latter would prove true.

“If you can kill penalties, it’s always a huge momentum swing,” said co-captain and defender Ali Peper. “I think we played very tough on our penalty kill and loved to take advantage of when we had some open pucks to try to get the puck out and keep everything moving. It’s a huge confidence boost, especially after that second [Northeastern] goal went in.”

Shortly after completing the kill, Harvard first-year forward Shannon Hollands would make the Huskies pay for not cashing in on the power play. Breaking out of the defensive zone, sophomore forward Anne Bloomer knocked the puck laterally to fellow sophomore forward Kristin Della Rovere, who would stretch the ice with a long-range breakout feed to Hollands. Receiving the pass, Hollands made no mistake, opting not to dish to the trailing Bloomer but instead to rifle the puck over the outstretched arm of Northeastern goaltender Aerin Frankel and under the bar.

Despite establishing an offensive presence, the Crimson would again have to spend stressful stretches in its own defensive zone due to an interference penalty by sophomore defender Maryna Macdonald. The Huskies would fire a flurry of point shots on net on the five-on-four chance, but Harvard came up with a series of key blocks from its defenders en route to a penalty kill.

As the game entered the final stanza, at times, the Crimson had to play constant defense. Northeastern sustained lengthy possessions and funneled pucks around the net, but nonetheless, Dutton successfully thwarted the Huskies’ attempts 15 times in the third period. With 7:27 remaining in the contest, Dutton managed to fend off a one-time blast, securing the rebound off her mask and into her glove. A few minutes later, she sprawled back to the post on a seemingly open wrap-around opportunity, paddling away the stuff attempt. The rebound deflected straight into the air before being swatted into the corner by the Crimson defense.

“Our defensemen did a good job trying to clear bodies out, and there was a lot of traffic, but I think they did a great job trying to move everyone so I could see the puck as much as possible,” Dutton said.

Both goaltenders stood tall, keeping the game scoreless for long stretches. 31:51 of game time would elapse between Hollands’ second-period strike and Northeastern’s empty-netter. Frankel improved on her already stellar 0.959 save percentage—which leads the nation—and her 1.06 goals against average, which counts for second-best in the NCAA Division I. Dutton, in only her third start and fourth appearance of the year, stood out as perhaps the Crimson’s impact player in the game. Despite the irregular playing time, she has surrendered only four goals on the 97 shots she has seen come her way in the 2019-2020 campaign.

“She is probably the toughest kid we have on our team, and I don’t mean to insult the others on our team because we’ve got a lot of tough kids,” Stone said. “She wills herself to make saves. She wills herself to put us in a position to be successful and keep us in a game. She has battled all kinds of different ailments or injuries here and there throughout her career. Her compete level is just over the top.”

Harvard will appear in the Beanpot’s consolation game next Tuesday, Feb. 11. The Crimson will also continue to vie for a playoff spot in the ECAC, taking on Cornell this Friday at 7 p.m.

“As coach always says, I think we were tough to play against today,” Peper reflected. “It’s nice to have that game to see what we can continue doing against top teams and know that we are a top team and move forward from there.”