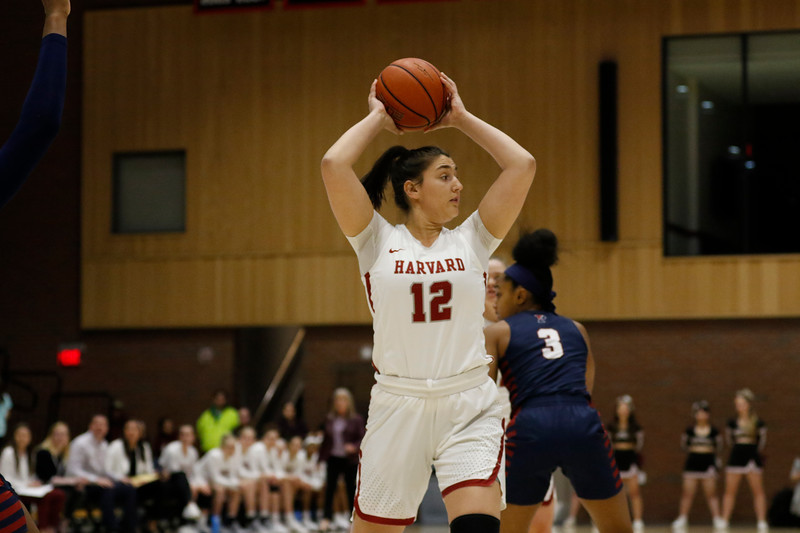 Harvard dealt Yale its first loss in Ivy League play this season at Lavietes Pavilion Friday evening, surpassing the Bulldogs by a final score of 66-57 in a game that featured four competitive quarters of action.

Making an infrequent appearance in the Crimson’s (12-6; 3-2 Ivy) starting lineup, co-captain and junior forward Rachel Levy led Harvard’s charge against Yale (14-4; 4-1 Ivy) on both ends of the court. In 34 minutes of play — the most Levy has ever played in one game for the Crimson — she did it all.

Levy grabbed a career-high 19 rebounds, nine of which were on the offensive end, and notched 14 points. She fired up her teammates by diving on the ground for loose balls, chasing down and rejecting Yale players at the hoop, and drawing a charge.

“I felt she was a junior captain and she was going to carry the team, and I thought she was great in both ends of the floor,” Delaney-Smith said.

Levy found herself in the starting lineup after her co-captain, senior guard Mackenzie Barta, sustained an injury against Princeton last weekend that prevented her from suiting up against Yale.

“Playing without ‘Kenzie is really hard. I think we all wanted to show up this weekend and give a little bit more just for that reason and play for her,” Levy said. “I know that's definitely weighing heavy on my mind. I just wanted to go out and remember the game could be taken away at any point, and it kind of just motivated me to go out and crash hard. Do everything hard. Just play because I love the sport.”

Levy said her teammates shared her sense of urgency.

“I think everybody came out really intense and ready to go,” she said. “Everybody's ready to step up and that's awesome. I think we're going to win a lot of games with a different game plan. We’re going deeper into the bench.”

Junior guard Matilda Salen contributed off of the bench for the Crimson Friday evening. Salen gave maximum effort in her 17 minutes of playing time, grabbing 5 rebounds, scoring a basket, and tallying a steal. Hot off the bench in the first quarter, Salen grabbed a defensive rebound, dished the basketball to a teammate ahead of her, and sprinted to the opposite end of the court. Trailing the play, she cut back door, caught the basketball, and layed it in off the glass.

Going into the game, Harvard knew Yale would defend the Crimson in a high pressure woman-to-woman defense, just like other teams have been doing all season.

On Friday night, Harvard was ready.

The Crimson capitalized on Yale’s high pressure by attacking the paint. Out of position, Bulldog players struggled to get between Harvard players and the hoop. As a result, the Crimson staked out an 18-8 lead to finish the first quarter, scoring almost all of its points exclusively from inside the paint.

Yale made inroads in the second quarter, however. Bulldog players offered a glimpse of how they’ve managed to rise to the top of the Ivy League leaderboard: they engaged Harvard players by aggressively attacking the paint and then dished to their teammates who caught the basketball wide open in front of the rim. Yale’s No. 2 Camilla Emsbo, who stands at 6 feet 5 inches, laid in 8 of the Bulldog’s 23 points in the second quarter. Harvard answered with only 11 points of its own, which put the Crimson down by a basket heading into the locker room at halftime.

In the third quarter, freshman guard Lola Mullaney fueled the Crimson’s surge on offense, just as she has done numerous times this season. In the quarter alone, Mullaney contributed 12 points. She erased Harvard’s deficit on multiple occasions by finishing at the rim, maneuvering passed her opponents and cradling the basketball to successfully get to the hoop. In addition to scoring in the paint, Mullaney knocked down two consecutive triples to give the Crimson a lead. Mullaney eventually finished with 19 points.

Harvard went into the fourth quarter ahead by one point. When the final buzzer sounded, the Crimson had surpassed Yale by nine points and had tarnished the Bulldogs' perfect conference record.

With five minutes to play in the game, senior forward Jeannie Boehm rolled toward the hoop off of a screen for Mullaney and caught the basketball at the left short corner of the floor. She immediately went to work in the paint, backing down her defender, Emsbo, who, off rhythm, stumbled to the ground. With her left hand, Boehm floated the ball into the hoop to put Harvard up by five points, sealing the Crimson’s victory.

Tomorrow afternoon, Harvard will host Brown, who has yet to win a game in Ancient Eight competition this season. The Crimson has won 15 of its last 17 games against the Bears. Tip off is scheduled for 4 p.m. at Lavietes Pavilion.