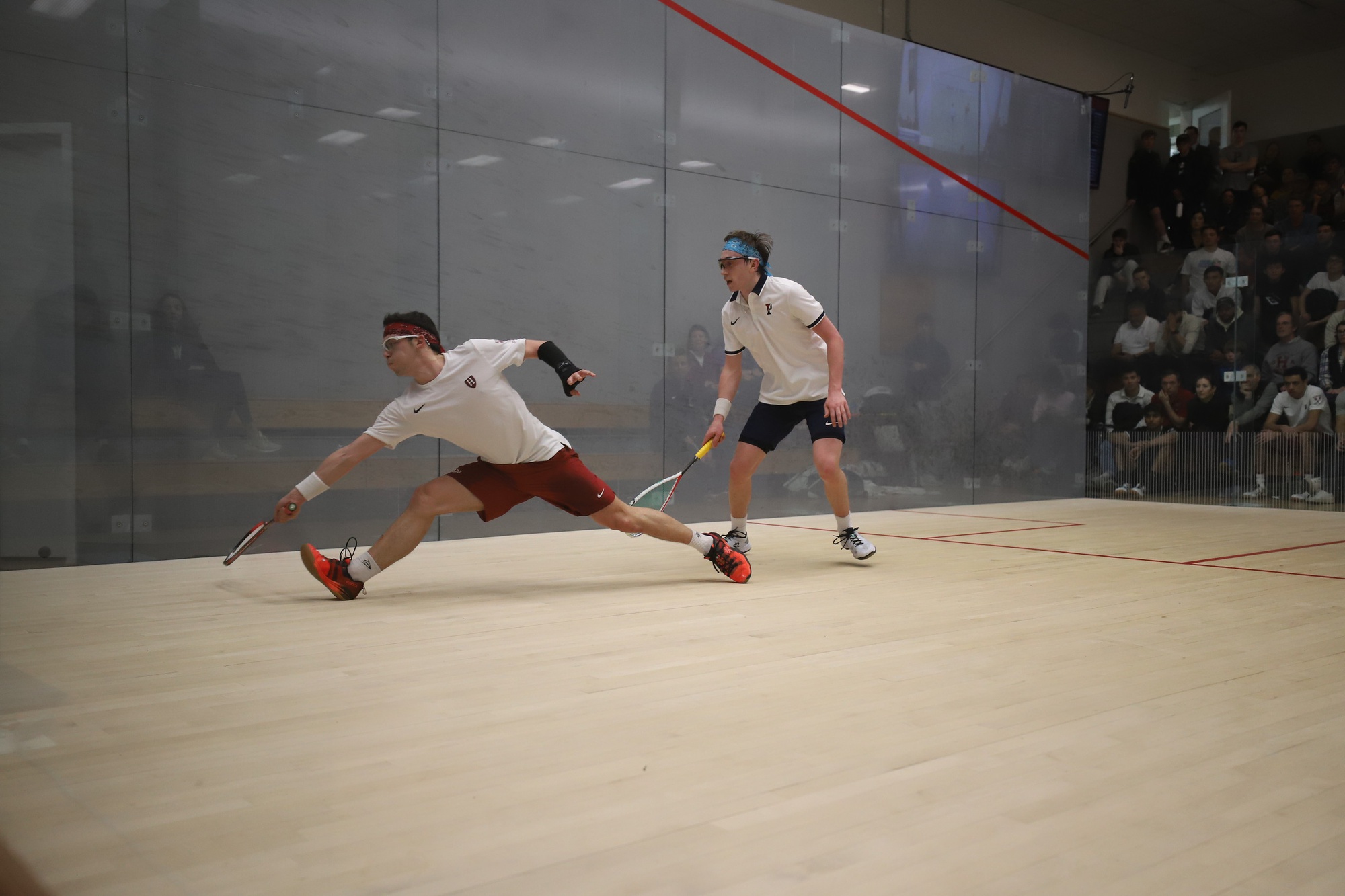 Ripping a volley down the backhand side, sophomore Victor Crouin watched as his opponent, No. 3 University of Pennsylvania’s Andrew Douglas, made a desperate stab at the ball in the back corner. When his return fell short of the front wall, Crouin turned towards the roaring crowd and thumped his chest in triumph.

Crouin had just come out on top in a grueling hour-long affair that saw him save three game balls to win the fourth game, 16-14, and secure a 3-1 victory for the Crimson in its first seed matchup. It was one of Harvard’s six victories against the Quakers as they beat their Ivy League counterpart, 6-1, securing their second straight national championship this past weekend. The Crimson ends the season on a 33-match win streak — it has also won its last 19 home matches.

According to Crouin, staying focused during the fourth game of his match, which lasted upwards of twenty minutes, required immense mental strength.

“At some point, it's not [just about] skills and technique,” Crouin said. “It's just who wants it the most and who can like deal with the pressure and the mental side better.”

“In that last game, I just told myself to keep going and just stay positive with myself [whatever] the score was, and just keep fighting,” Crouin added.

Crouin’s marathon match was a spectacle on the final day of the tournament, but Harvard’s victory was buoyed by strong performances up and down the ladder. The Crimson had actually clinched the victory during the final stages of Crouin’s match, when junior Adam Corcoran defeated UPenn’s Wil Halen to secure Harvard’s fifth victory and its championship title.

Senior co-captain Sean Hughes secured the first victory of the day for the Crimson with a 3-0 victory at the fifth-seed pairing. First year Ayush Menon, playing at ninth seed, secured Harvard’s second win with a 3-0 steamrolling of his Quaker opponent. Sophomore Marwan Tarek put the Crimson within striking distance of the title with a sweep of his own at the second pairing, giving it a 3-0 lead over the Quakers. Junior Sam Scherl set the stage for Corcoran’s clincher with a 3-1 victory at the fourth-seed matchup.

According to Scherl, the team’s shared sense of responsibility was instrumental to their performance this past weekend.

“With weekends like this, we always take it one match at a time,” Scherl said. “And I think everyone just focused on their match. And we didn't want anyone to feel like their match was expendable. We wanted everyone to feel like their match was the one that was going to decide it. And I think everyone really took that on and had a sense of personal responsibility. Like, ‘I'm not going to be the one to lose, I'm going to be the one to get us another point on the board’.”

Several strong opponents stood in the way of Harvard’s quest for the championship. Before facing off against the Quakers, it had to fight its way through eighth-seed Drexel in the quarterfinals and fourth-seed Princeton in the semifinals. However, the Crimson efficiently cut their way through both matches, securing back-to-back 9-0 wins to come into the finals rested and ready to rumble.

“We were really focused on getting every match done as clinically as possible,” Scherl said.

Harvard has experienced sustained levels of success over the past few seasons, but getting to win the trophy in front of the home crowd was especially meaningful for the team, according to Crouin and Scherl.

“I just want to thank all the parents and fans and fans of Harvard for coming or even watching on the live stream,” Crouin said. “I think it was a very successful event here at Harvard and, and it will probably be the highlight of many of our years. It's not every day that we can play with such a deep crowd and so I think the guys deserve it and we’re really happy to win it home especially.”

The victory at home was especially sweet for the Crimson’s senior players, who just missed out on the title at home their freshman year.

“It's kind of a cycle for our seniors, a nice ending to their college squash careers,” Scherl said. “They lost it here their freshman year in a brutal battle and to be able [to come home during] their senior year and clinch it and win a final national championship I think is really meaningful for them and the whole team. So we're just so excited to be able to perform in front of all our friends and supporters.”

With the victory, Harvard closes out another phenomenal year under the leadership of Head Coach Mike Way, Associate Head Coach Hameed Ahmed, and Assistant Coach Luke Hammond. The Crimson will head into next season as the reigning National Champion for the second consecutive year.

This Friday, several Harvard players will make their way down to the University of Pennsylvania for individual nationals, where they will compete against the nation’s strongest collegiate players. More information will be released closer to the date of the tournament.

— Staff writer Eliot Min can be reached at eliot.min@thecrimson.com