Men's Hockey Bests St. Lawrence in Game One of ECAC First Round 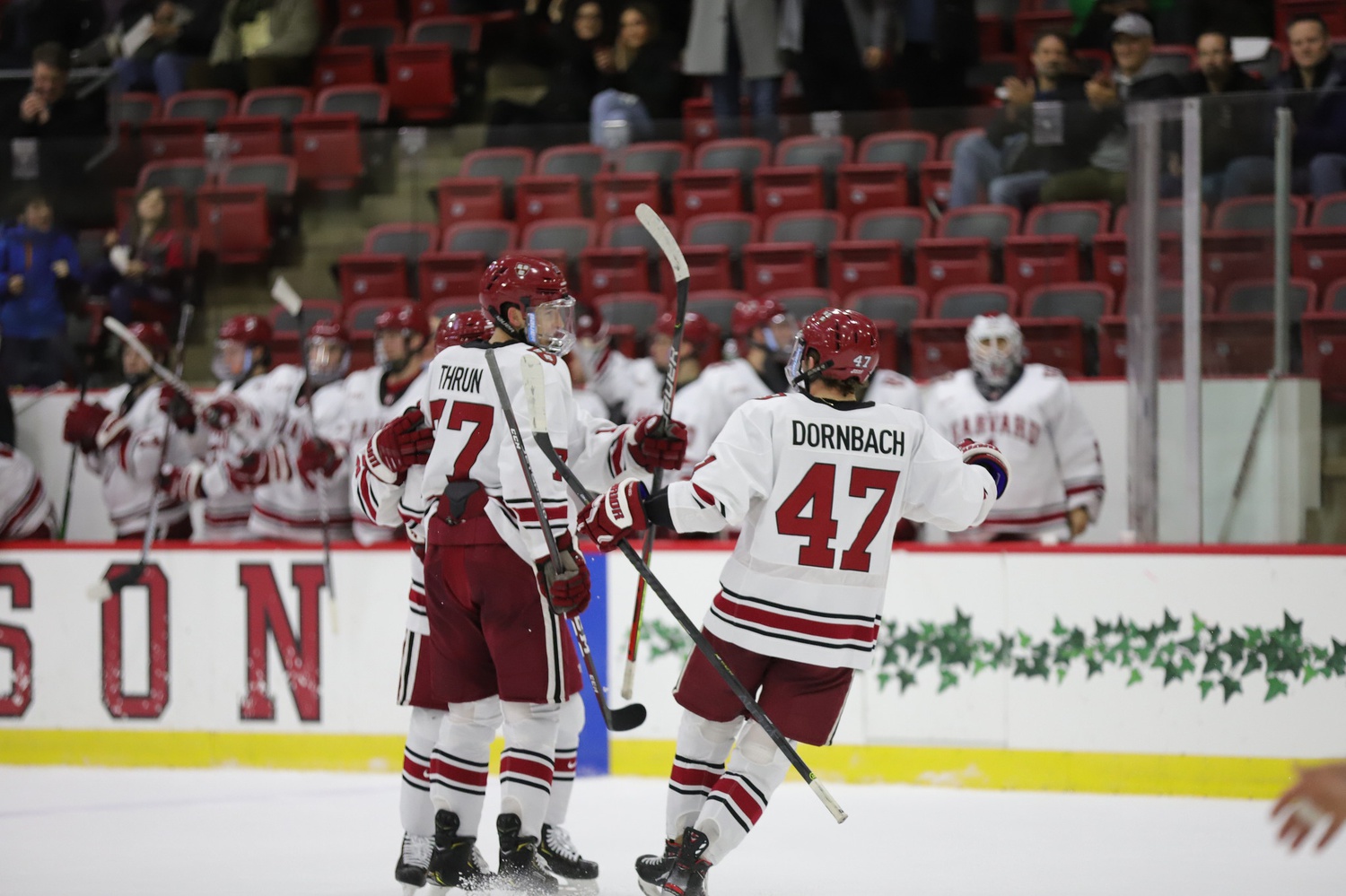 The Crimson found twine at even strength five times on Friday. By Owen A. Berger
By Stuti R. Telidevara, Crimson Staff Writer

The Harvard men’s hockey team found itself in an unusual position on Friday night: competing in the first round of the ECAC playoffs. Until this year, the Crimson received a bye to the second round every season since 2015-2016, as is the reward of the top four conference seeds. A late-season slump, however, cemented Harvard as the fifth seed in this year’s playoffs — meaning an added best-of-three series against St. Lawrence in the team’s postseason journey.

But the Crimson (14-10-6, 12-6-5 ECAC) put itself in a position to knock the Saints (4-26-5, 2-19-2) out of the playoffs and progress to the next round with a 5-3 victory. Uncharacteristically, all five Harvard goals came at even strength, while the squad didn’t find twine on the powerplay at all.

“I thought we created enough scoring opportunities and shots,” head coach Ted Donato ’91 said. “We also created some of our own problems. We turned the puck over… We gave up a breakaway… To me, there’s some things that we certainly are going to need to do better.”

Despite the disparity between the teams’ records, St. Lawrence often breaks the ice against the Crimson. That was the case on Friday night as well. Halfway through the first period, Saints senior Michael Laidley tucked a pass behind his back into the neutral zone. His linemate, junior Callum Cusinato, picked up the puck before Harvard defenseman Nick Azar could, and took off on his own, elevating the biscuit over the arm of rookie net-minder Mitchell Gibson to give the visitors the 1-0 lead.

“The challenge is more...we shouldn’t try and change the way we play,” said sophomore Jack Rathbone of the visitors’ size and physical gameplay. “We know what makes us good, we’re a fast, skilled team; when we use our feet we can be physical. But I think we’re not trying to match them, physicality-wise.” 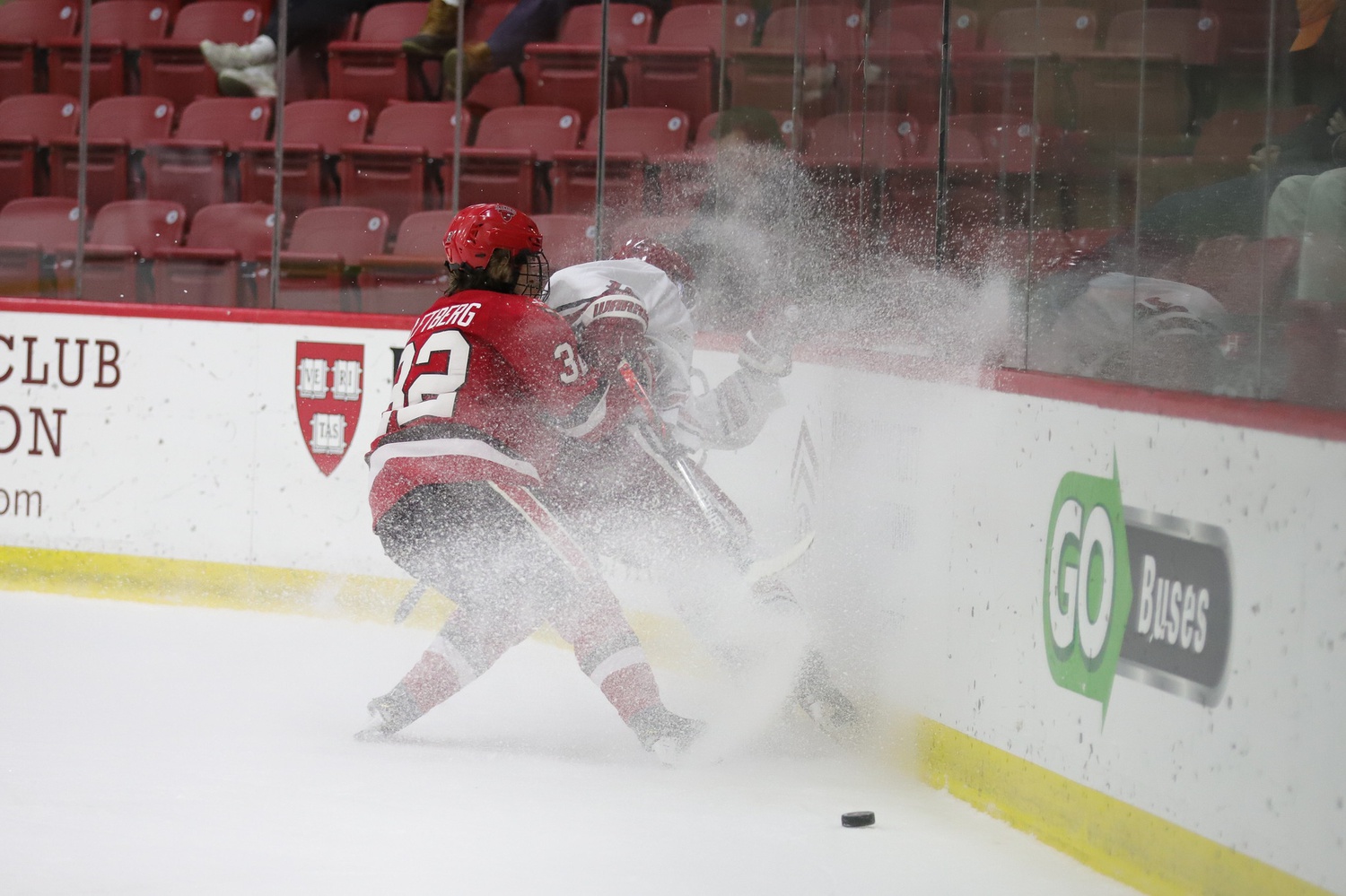 The beginning of the postseason brought with it a physical tenor on Friday. By Owen A. Berger

It took only 30 seconds for the Crimson to equalize, however. A point shot from junior blue-liner Reilly Walsh was blocked by bodies in front of the Saints’ net, but rookie John Farinacci was able to pounce on the rebound. Farinacci’s shot trickled through first-year goaltender Francis Boisvert, with just enough pace on it to get over the goal line.

Shortly after Farinacci’s tally, Harvard broke the tie and took its first lead of the night. A streaking Henry Bowlby carried the puck into the St. Lawrence zone, scoring on a backhand spin-o-rama from the side of the net. Incidentally, the last time the junior forward had a tally was in a Feb. 22 loss to the Saints.

The score stayed at 2-1 by the end of the first period, and the Crimson returned to the locker room with both a lead and a shot tally of 17 to St. Lawrence’s 8. A late powerplay had helped those numbers, but on the whole Harvard had thrown a great deal of pucks at Boisvert, a key to winning in most situations.

“I think we were just doing all the right things,” Rathbone said. “We were hanging onto pucks down low; our forwards were doing a great job of…[forcing] their D to make plays… We were really excited about that effort.”

A Bowlby hooking penalty halted the Crimson’s momentum push, however. Not long before the two minutes of powerplay time were up, the Saints connected on a passing play and sophomore forward David Jankowski punched the puck home from the slot. The game was knotted up again, this time at 2-2.

Harvard regained the lead at the end of the second thanks to a tally from rookie forward Nick Abruzzese, but a quick St. Lawrence goal to start the third leveled the playing field once more. It took a strong top-line shift in the middle of the frame for the Crimson to net the eventual game-winner.

First-year forward Austin Wong started and finished the play. Throwing a hit behind the net, Wong forced a Saints turnover in their own zone, one that sophomore Jack Drury was quick to capitalize on. Drury skated to the goalie’s right, but rather than attempting a shot himself passed across the goal mouth, where Wong was waiting to tap in the puck for the goal. The rookie now has two goals in two games, a career first.

“I got in on the forecheck with [Abruzzese] and battled pretty hard,” Wong said. “I got a pretty wide-open pass, a nice pass by Drury.” 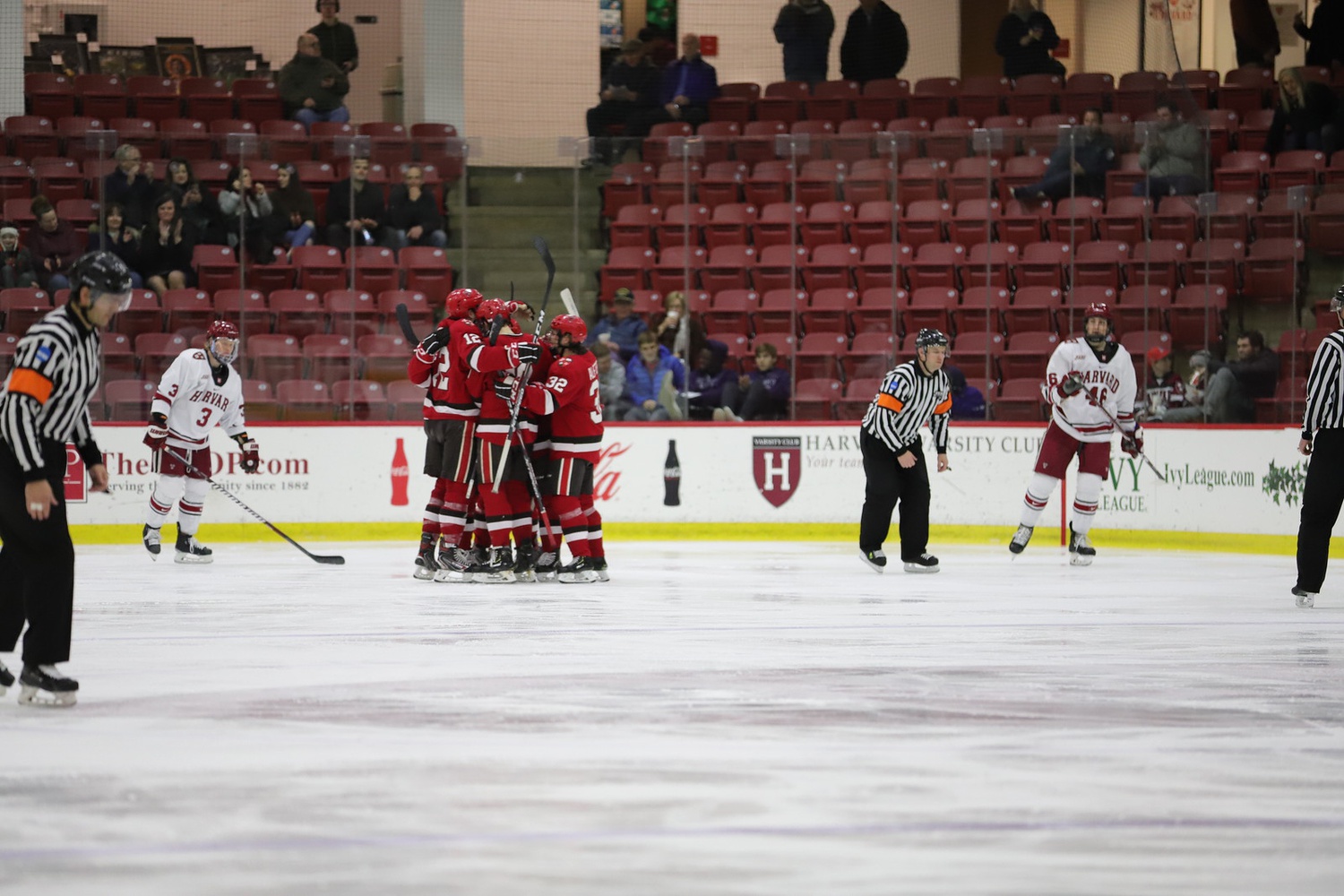 Despite going ahead three separate times on Friday, it was not until late in the third period that the Crimson was able to distance itself from the Saints. By Owen A. Berger

Only after Harvard added its fifth goal did either team give itself a two-goal margin. The dagger came from sophomore defenseman Jack Rathbone, who ripped a shot from the top of the left circle to beat Boisvert.

Rathbone had 10 shots on net on Friday, a team high. Two other defensemen followed on the shot chart: Walsh and rookie Henry Thrun, who put up five each. All three collected at least a point.

Regardless of Friday’s result, however, Saturday promises a much more challenging hurdle. It will be an elimination game for St. Lawrence; the visitors will need to win to save their season. But the Crimson is prepared for what the Saints will bring.

“We’re going to have to play better, we know that, tomorrow,” Rathbone said. “They’re playing to win or [going] home, so we’re definitely going to bring it.”