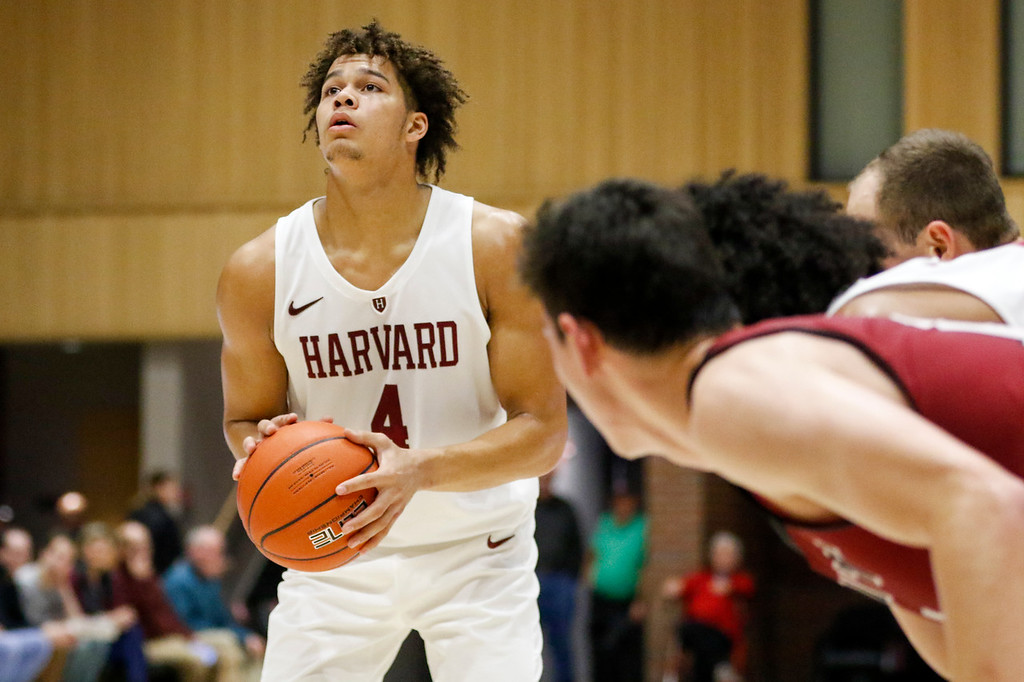 Brooklyn native Chris Ledlum has contributed to the second unit all season long as a freshman By Timothy R. O'Meara
By David Manikas, Crimson Staff Writer

For a team as geographically diverse as the men’s basketball team, it is always fascinating to see whether the incoming recruiting class adds to the vast spectrum of hometowns already on the team.

New York is considered by many fans of the sport to have one of the richer basketball cultures in the world: being home to two NBA franchises, legendary streetball leagues, and dozens of competitive high schools teams led by the city’s top prospects.

To Harvard, the state makes up a significant portion of every year’s admission class as students make their way from prestigious high schools such as Trinity, Collegiate, and Dalton. The same cannot be said, however, for Tommy Amaker’s squad in recent years.

It was thus surprising to see that two members of the 2023 recruiting class, Chris Ledlum and Idan Tretout, were natives of Brooklyn, N.Y. Ledlum came in to Harvard as an ESPN Top-100 recruit, finishing his high school career as the Massachusetts Gatorade Player of the Year at the highly-esteemed Northfield Mount Hermon School. Tretout committed to the Crimson while at Wilbraham and Monson Academy, where he would be named first team All-NEPSAC in his senior campaign. Their paths to Cambridge, however, were much more intertwined than it may seem upon first impression.

FROM MIDDLE SCHOOL TO SIGNING DAY

Heading into their freshman year of college, Tretout and Ledlum were very familiar with each other, being familiar with each other early on and reconnecting towards the end of high school. In fact, Harvard wasn’t even the first school the two attended together. Tretout, who started a grade above Ledlum and later re-classified before finishing high school, remembered when the two were in the same middle school.

“We actually went to the same middle school,” said Tretout when recalling the start of his relationship with Ledlum. “But, we didn’t know each other that much” due to their initial difference in grade levels.

From there, Tretout headed to Bishop Loughlin High School in Brooklyn, where he was a key contributor on one of the best basketball teams in the highly-competitive Catholic School League. Ledlum began his high school career at St. Peter’s Prep in Staten Island, where he excelled on the court as well as on the football field.

After spending a few years in New York, however, both chose to finish their high school careers playing in the New England Preparatory School Athletic Council. The option to leave home for a completely different high school atmosphere may turn many away, but to them, it was ultimately an investment for the years ahead.

“It was just taking my game to the next level,” Tretout said. “The NEPSAC offered me gym resources and academic resources that I wouldn’t have in the city.”

He would go on to have a successful basketball career at Wilbraham and Monson Academy, drawing attention from schools such as Harvard, Yale, and St. Joseph’s (PA). After his high school basketball seasons, he would go on to play in the Under Armour Association AAU circuit for New Heights, a New York-based program featuring the likes of Lester Quinones and Precious Achiuwa — both members of coach Penny Hardaway’s 2023 recruiting class at Memphis University. 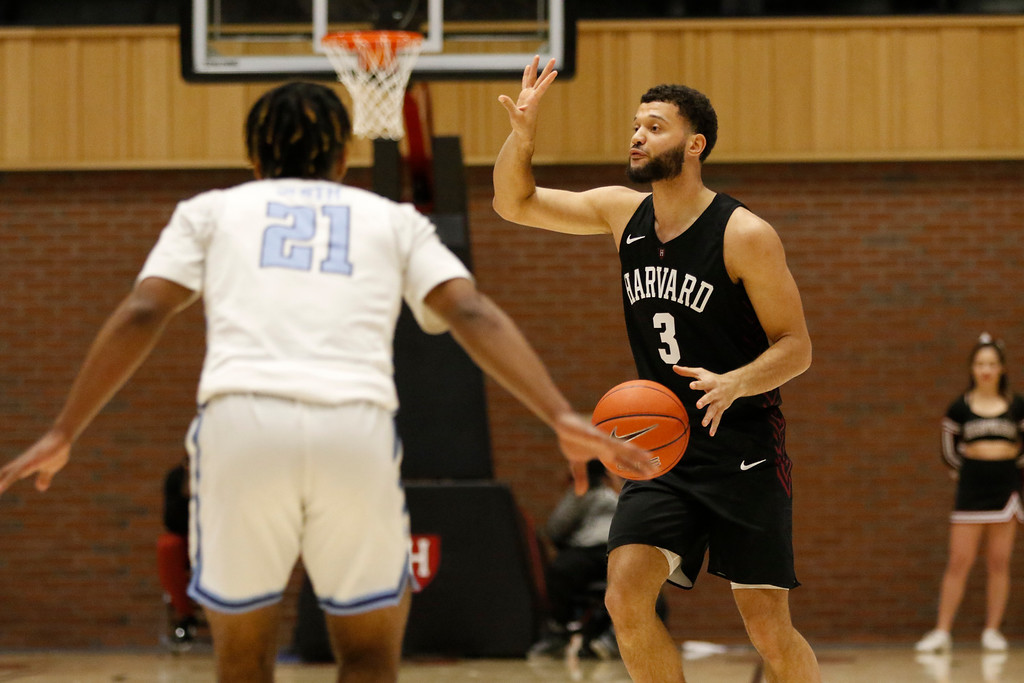 Brooklyn native Idan Tretout is seeing more action in conference play, logging minutes in each of the past seven games for the Crimson By Timothy R. O'Meara

Ledlum, on the other hand, went on to transfer to Northfield Mount Hermon — the same school that sophomore Noah Kirkwood attended before committing to the Crimson. Deciding to head to prep school for the “college atmosphere” that it provided him both “academically and athletically,” Chris Ledlum dominated the NEPSAC, helping his team win the league championship in 2019 and earning Player of the Year honors along the way.

He too spent his AAU seasons playing for a New York program as a member of the New York Jayhawks on the Adidas Circuit. Along with his Gatorade Player of the Year Award, Ledlum’s accolades and dominance on the court earned him offers from several high-major basketball programs including Georgetown, Xavier, Texas Tech, and Florida.

With such successful high school careers, however, came the pressure of the recruitment process. Having to narrow down offers to play for competitive programs is never simple, but to many Harvard recruits — Tretout and Ledlum included — Harvard’s draw was not solely the winning culture instilled by coach Amaker.

“Everything that this basketball program has to offer outside of basketball was a huge part of my decision,” Tretout said when discussing his commitment to the Crimson.

Recalling his conversations with some of the members of the team on his official visit to Harvard, Tretout was impressed with how authentic the older guys were with him.

“They kept it real with me, telling me exactly what Harvard would be like academically and how it would be like on the court,” he said. “The realness that the players kept with me made it an easy decision.”

Tretout committed in September of 2018 — two months before Ledlum made his decision to join him. It was during this hectic recruiting period when the two reconnected, as Tretout hoped to bring his fellow Brooklyn-native along with him to the Ivy League.

“When we were in the recruiting process we got really close.” Tretout said. “I committed first and was trying to have Led[lum] come over”.

It seems like Tretout’s efforts really helped, as Ledlum chose Harvard over the plethora of Power Five schools hoping to add him to their rosters in November of 2018.

Although Ledlum knew that Harvard would not necessarily get the same media coverage as the other schools recruiting him tend to get, his decision was based on the “high level academics and high level basketball” that could not be topped at any other school. Ledlum’s high school coach, John Carroll, suggested that it was ultimately the team chemistry that the Brooklyn native saw in his visit that set Harvard apart--just as it had for Tretout.

“The Harvard locker room seemed to be the difference maker where he made really strong connections with the players,” said Carroll last year.

Post-commitment, the two would keep in touch and work out during the summer before their freshman year. They would even team up to play in New York’s Pro-Am League, Pro City, building in-game chemistry with each other before any Harvard practices began.

FITTING IN WITH THE TEAM

With Ledlum’s arrival to Harvard came the expectation that the 6-foot-6 forward would immediately contribute to a team fighting for a NCAA tournament bid.

“Coming in, Coach said that he wants me to be a person that can contribute right away,” Ledlum said. “I’ve just been trying to do all the little things I can.”

Ledlum has seen action in every game so far this season, averaging 7.6 points per game on 15.8 minutes, shooting 43.4% from the field. Most recently, he had a chance to play in front of his friends and family as the Crimson made the New York road trip to Columbia and Cornell. Logging 26 minutes in Columbia’s Levien Gymnasium, Ledlum’s 15 points helped lead an offensive push as senior guard Christian Juzang came down with an injury at the end of the first half.

Tretout, on the other hand, has not gotten the same amount of playing time as Ledlum. Joining a deep guard rotation consisting of Juzang, Bryce Aiken, and Rio Haskett, Tretout found himself having to work in practice for playing time in the game. Nevertheless, his “stay ready” mentality has earned him valuable minutes in conference play, seeing action in the Crimson’s last seven games.

“Coach’s quote is stay ready so you don’t have to get ready. I try to embody that,” Tretout said. “My teammates have really been there for me keeping my morale up”

Averaging 2.8 points on 5.7 minutes a game shows that the freshman guard is making the most of the opportunities he is receiving with Aiken not playing and Juzang recently out of the rotation. Reflecting on the freshman class and how well they have fit in with the team so far, senior forward Justin Bassey emphasized Tretout’s work ethic:

“He’s been phenomenal in practice and getting extra work,” Bassey said. “He’s had his spirit right. He’s had his mindset right.”

Heading into the final weekend of the regular season and the postseason, Ledlum will continue to be one of the key pieces in the second unit, providing a spark when the team needs it most.

For Tretout, it would be no surprise if more minutes started to come his way with Amaker needing his “bench and balance” more than ever. The New York connection and chemistry developed by the two freshmen will be on display as they start to see more time together on the court.