Men's Hockey Surges Past St. Lawrence in ECAC First Round 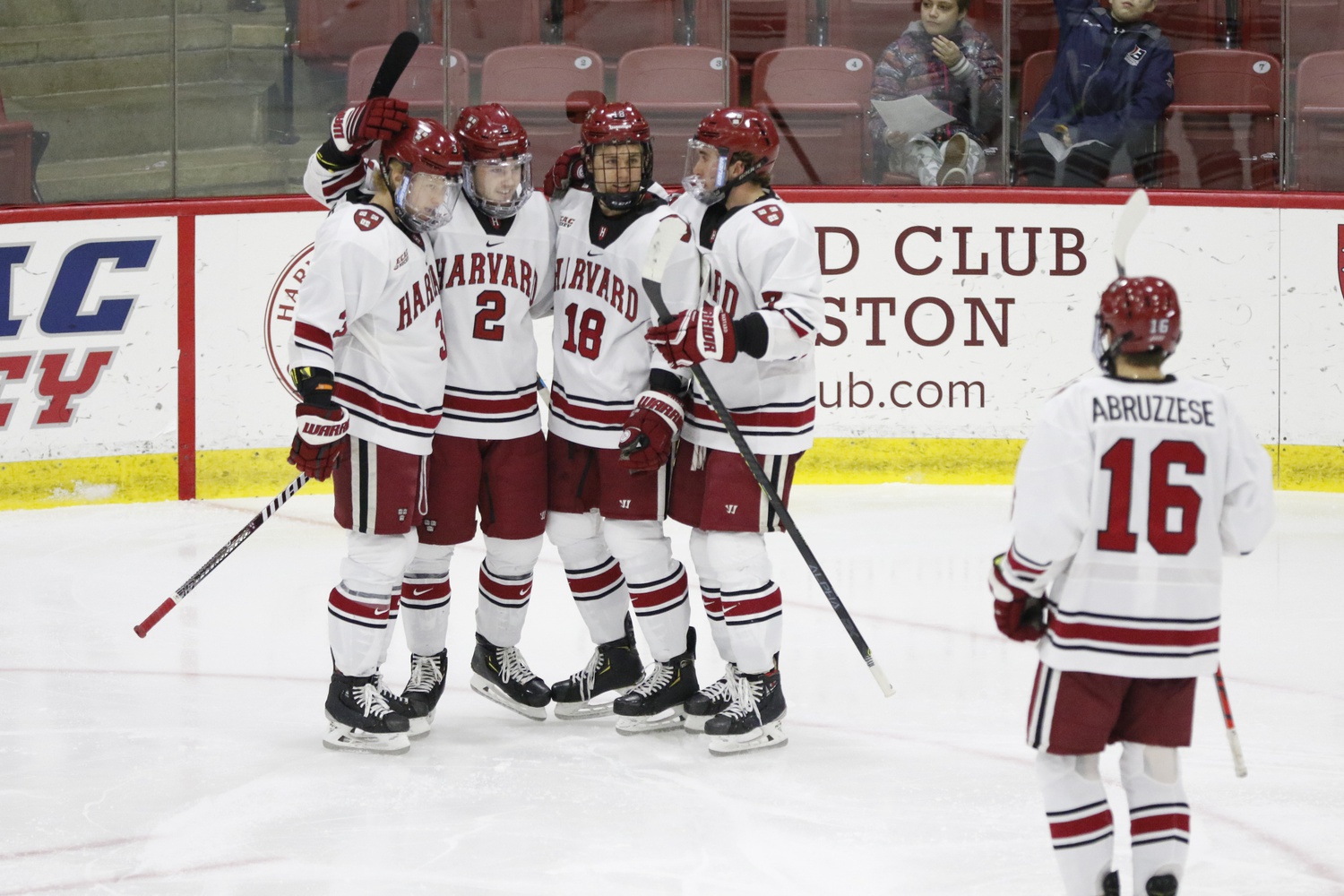 Come Saturday’s Game Two between the Harvard men’s hockey team and St. Lawrence, one team had everything to play for. The Saints, down by one game in this best-of-three series, would need to win to keep their series alive. Certainly the visitors had controlled stretches of play in the first game, though the Crimson emerged victorious. Ultimately, however, the course of this second contest would be very different from the one before it.

Where Friday night was a more closely-contested game, Harvard (15-10-6, 11-6-5 ECAC) jumped out to a lead early on Saturday and never looked back, besting St. Lawrence (4-27-5, 2-19-2) by a score of 7-1. Two powerplay tallies and five different goal-scorers powered the hosts’ effort, earning the Crimson a 2-0 series victory and a trip to the ECAC quarterfinals.

“We’re excited to be able to move on,” head coach Ted Donato ’91 said. “Today we were able to get off to a good start and create some separation, [and] made some pretty skilled plays… I give a lot of credit to St. Lawrence… There’s no easy playoff series in this league.”

The St. Lawrence coaching staff made a change between the pipes after the Game One loss. Senior Daniel Mannella (3.07 GAA, .906 SV%) started instead of rookie Francis Boisvert (3.50 GAA, .897 SV%). Mannella was in net for both of the Saints’ clashes against Harvard this season, and so had seen his team win and lose to Harvard heading into Saturday’s contest.

“We had a good week of preparation,” junior defenseman Reilly Walsh said. “Honestly, losing to them [on Feb. 21] probably was a really good experience for us... We adjusted in practice and knew we were going to have to beat their forecheck, and I thought we did a really good job of that.”

Around the halfway mark of the first period, Harvard began to really pressure the visitors. After several strong shifts and a powerplay opportunity, the play of an unusual defensive pair — sophomore Jack Rathbone and rookie Jace Foskey — gave the hosts the first goal of the night.

Key keep-ins at the blue line prevented the Saints from clearing the zone, and Foskey teed up a point shot that sophomore Baker Shore redirected behind the net-minder. Foskey’s assist was his first collegiate point.

Another Rathbone play extended Harvard’s lead at the 17th minute of the first frame. The blue-liner threaded a pass to junior forward Henry Bowlby, who had snuck past the St. Lawrence defense. Skating in alone, Bowlby chipped the puck past Mannella for the 2-0 lead.

“I don’t think we gave them as many chances, where we kind of handed them breakaways and outnumbered chances,” coach Donato said. “We managed the puck a little bit better. Obviously making some plays early was helpful, to get the lead. Just to get the positive vibe on the bench is always helpful.” 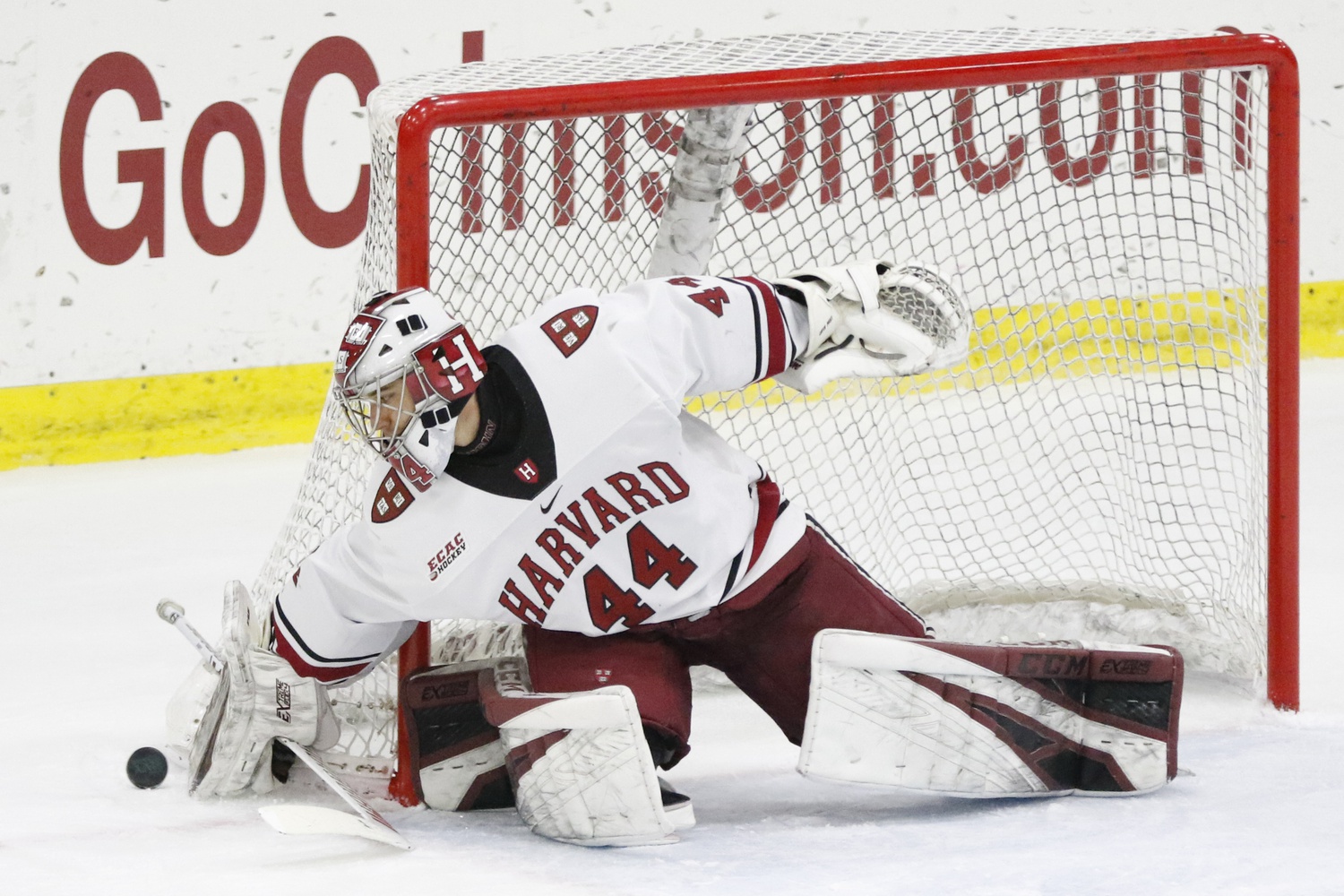 Rookie net-minder Mitchell Gibson turned away 21 of the 22 shots he faced, good for a .954 save percentage. By Timothy R. O'Meara

The first-period action had not come to a close yet, however. At the 18-minute mark, Saints junior co-captain Dylan Woolf was whistled for boarding Harvard junior Jack Badini behind the St. Lawrence net. While Badini was quick to get back on his skates, the referees assessed Woolf a major penalty and a game misconduct — meaning that Harvard would have some powerplay time to end the first as well as to begin the second period.

It didn’t take long for Harvard to find twine on the man advantage. Walsh received a pass in the slot just as the Saints penalty-killers gave way in front of the net, giving Walsh a good look at the goal. His sneaky wrister made its way past Mannella. When the teams left the ice, Harvard found itself with a comfortable three-goal lead.

“We were just a little more ready to go,” said Walsh, comparing Saturday’s start to Friday’s. “I think we knew that we had an opportunity to put the game away in the first period… We saw an opening to get a lead after one [frame] and I thought we...finished some opportunities, unlike yesterday.”

The powerplay wasn’t done scoring yet — and neither was Walsh. In the remaining three minutes of 5-on-4, Harvard continued to hem St. Lawrence in its own zone. A cross-crease feed from sophomore Jack Drury made its way onto Walsh’s stick, and the junior tapped it home. The two-spot is Walsh’s first of this season, and marks his first two-goal game since the 2018-19 season opener.

After Harvard added a fifth goal, courtesy of Drury, the Saints proved they would not go quietly. An interference penalty put the visitors on the powerplay. Towards the end of the two minutes, sophomore forward Kaden Pickering tapped in a feed from senior Alex Gilmour, breaking Harvard net-minder Mitchell Gibson’s shutout bid. 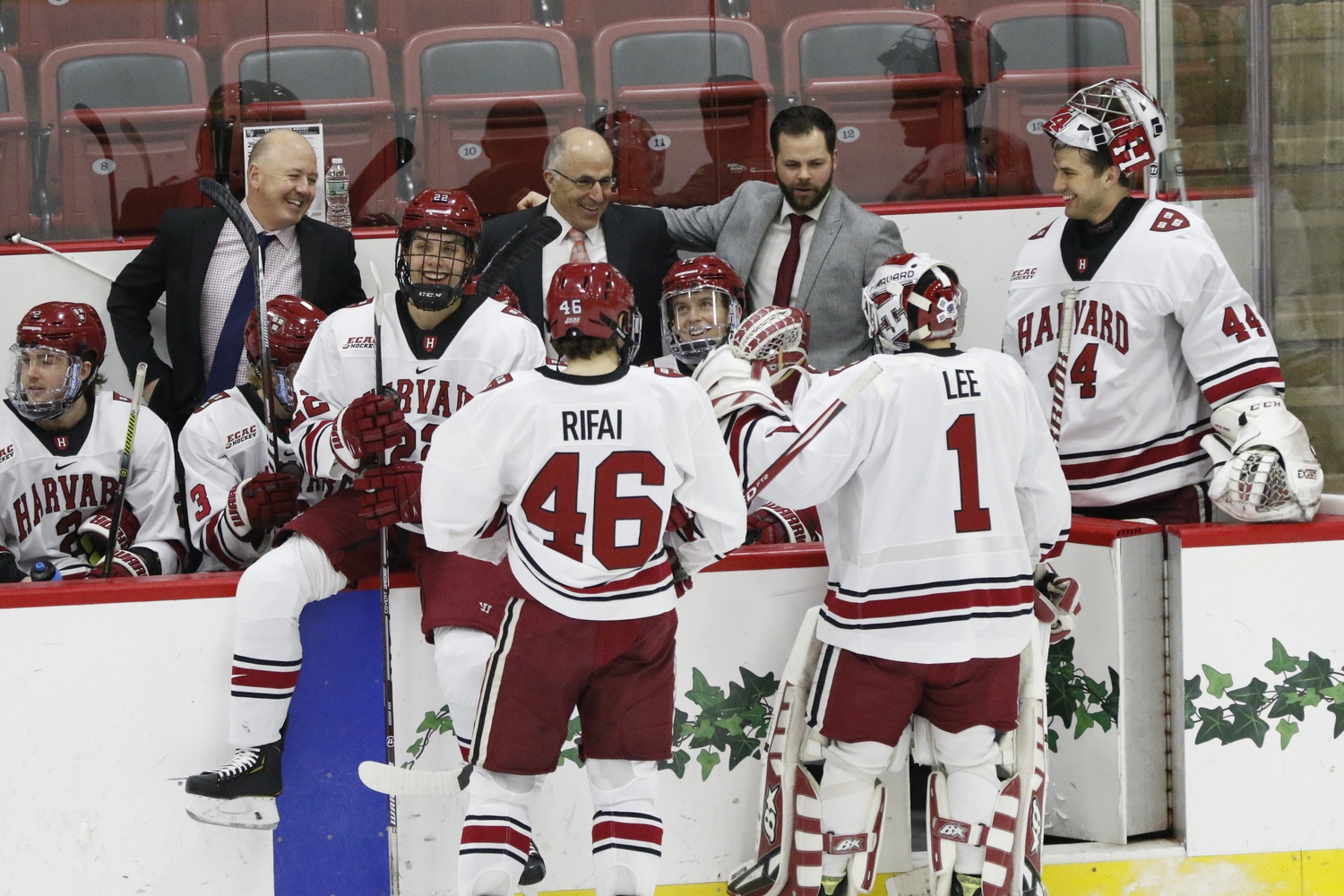 Nevertheless, the rookie goaltender backstopped his team to a 2-0 series victory, turning away all but one of St. Lawrence’s shots. Harvard added two more tallies, from Drury again and rookie John Farinacci, for a comfortable 7-1 lead late in the third.

“I thought [Gibson] looked in control,” coach Donato said. “Last night I thought he played well, but the game was a little bit choppy, defensively, for us... But I thought he was solid tonight and gave us a good effort.”

With two senior goaltenders on the bench, the Harvard coaching staff pulled Gibson so that Cameron Gornet and Sihak Lee could have a few minutes of ice time each in their last home game.

“It was pretty special,” coach Donato said. “[Lee], as a third goalie, maybe doesn’t get as much love and attention as far as playing time, but certainly has a lot of value in the sacrifice he makes to...work with guys... I wanted to make sure that Cam Gornet was in the net, as a senior, at the end of the game. He’s played some very important games for us, he’s been a tremendous teammate.”

If Harvard wants to keep up its streak of Lake Placid appearances, it will have to get through another best-of-three series, however. The team will visit RPI for an ECAC quarterfinal matchup with a score to settle — a loss to the Engineers in the last weekend of the regular season put Harvard out of the running for the conference four-seed and a first-round bye.

“We’re really excited,” said Drury of the second-round matchup. “It’s a good atmosphere at that rink… We know they’re going to be fired up.”