Women's Basketball Halts Losing Streak Against Brown, Then Falls to Yale to Close Out Season 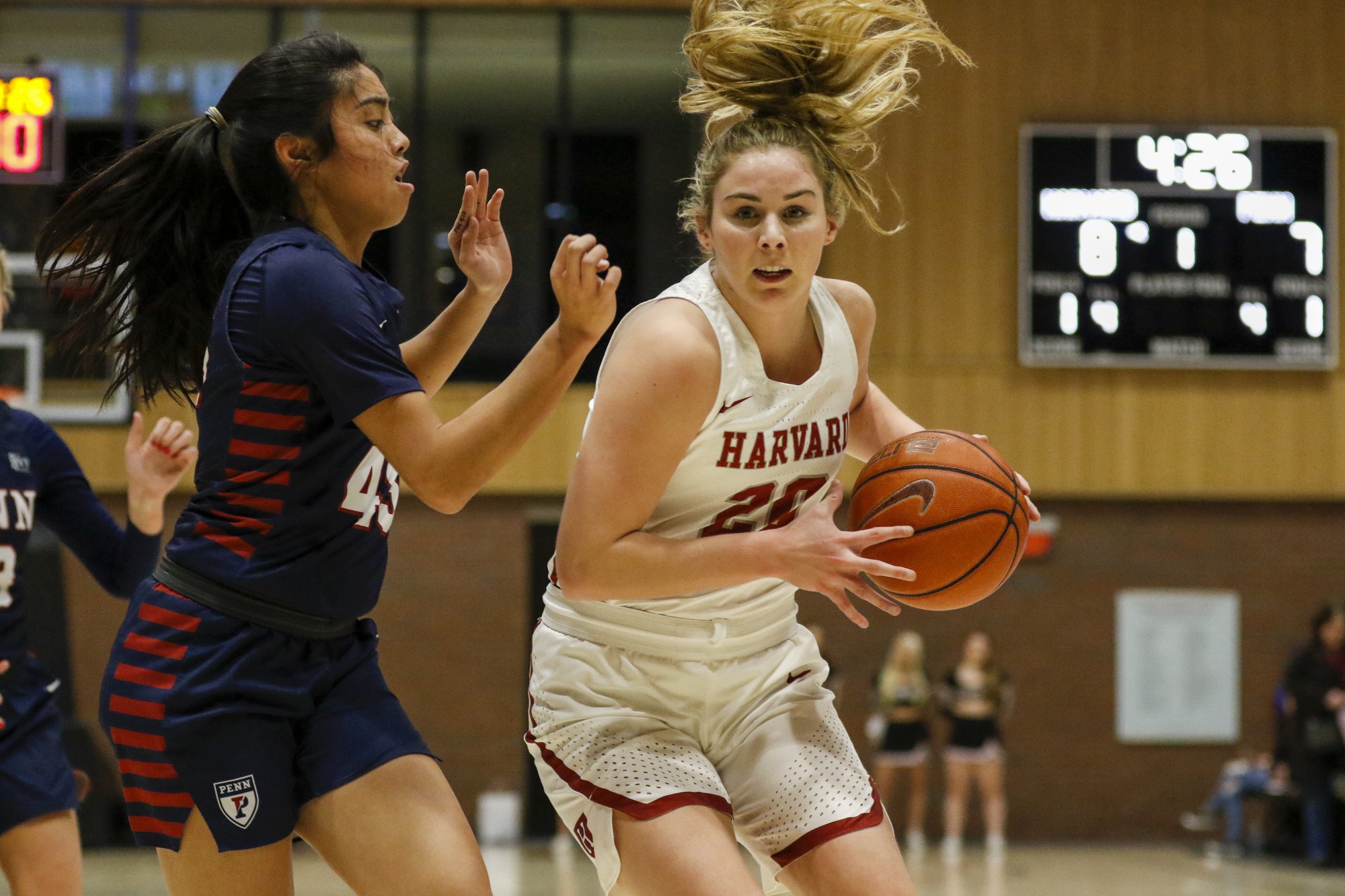 Seeking to end the 2019-2020 season with a successful road trip this past weekend, Harvard halted its five-game losing streak with a 63-59 victory over Brown on Friday night. The Crimson looked to carry this momentum into its contest with archrival Yale on Saturday but came up short in a close 60-58 Ivy League battle.

Entering Friday night’s match up with Brown (8-18, 2-11 Ivy) was a Harvard squad (15-12, 6-8) hungry to move past its recent struggles and secure a win against the last-place conference foe. Freshman guard Lola Mullaney led the offensive effort with 17 points and 7 rebounds, and was joined in double figures by her sophomore backcourt partner Tess Sussman with a 13-point performance. Mullaney and Sussman combined for seven three-pointers, a clear indication that the shooting woes of previous weeks did not follow the Crimson to Providence.

After trading baskets with the Bears to start the first quarter, Harvard used an 11-1 run in the second to stretch its lead to a healthy 14 points. But just as the Crimson looked to grow this margin and carry a huge amount of confidence into halftime, a stretch of turnovers, foul trouble, and inefficient shooting sparked a 9-0 Brown run to cut the deficit to five.

“We played the first quarter the way we feel we should have played all year,” said coach Kathy Delaney-Smith. “We played about half the second quarter that way, and then hit the wall. We got away from some stuff that we had been doing very, very well.”

Driving the first half lead was freshman guard Annie Stritzel, who tallied seven of her ten points in the second period. Stritzel’s solid play off the bench came on the heels of her career-high 18-point performance last weekend. As the season drew to a close and Delaney-Smith looked for consistent play from her reserves, the young and talented Stritzel was the one she turned to most.

“I think [Stritzel] has an incredible future, even though she’s a little nontraditional in how she plays,” said Delaney-Smith. “She has a tremendous heart, tremendous work ethic, and a great basketball IQ. [...] She became the sixth-player on the bench for us, and she does a great job of that.”

Harvard’s troubles late in the first half continued into the second, and, after being outscored 17-6 in the third quarter, the Crimson found itself trailing a Brown squad playing much better than the Bears’ record indicated. A three-point shot with seven minutes to play from junior forward Rachel Levy restored the Harvard lead, and her 17-rebound effort helped protect it until the final buzzer sounded, giving the Crimson the win it was desperate for.

Having recorded a home victory over Yale (19-8, 9-5) on February 7th, Harvard was determined to complete the season sweep and end its 2019-2020 campaign with a signature win against its foremost rival. Senior forward Jeannie Boehm paced the Crimson with a huge 19-point, 15-rebound performance in her final game in a Harvard jersey. Mullaney brought her recent hot shooting into New Haven as well, finishing with 16 points on four-of-seven shooting from beyond the three-point line.

The Crimson enjoyed its largest lead of the night in the first quarter, as three triples from Mullaney pushed Harvard to a 20-11 lead. Soon, however, the dynamic play of Yale’s senior guard Roxy Barahman settled her team into the contest. The rivals exchanged buckets through the rest of the half, making for a thrilling, hard-fought game that featured four ties and seven lead changes.

“Yale has all the pieces,” said Delaney-Smith. “They have a veteran team, they have a point guard [Barahman] that can score, they have an inside player that is very talented, they have a lights out shooter that we did a very good job on. They have a bunch of kids that are blue collar workers.”

After trailing by six points at halftime, a balanced scoring attack from all five starters produced a competitive third quarter in which each team scored 15 points. Rachel Levy continued her solid play from Friday, and her seven fourth quarter points led the Crimson as it erased the Yale lead down the stretch. Levy’s two free throws with 35 seconds remaining gave Harvard a 58-57 advantage, but a massive three-point shot from Yale put the Bulldogs on top 60-58 at the 30 second mark.

With one final possession left to determine the outcome of the game, a missed three pointer from Levy and a missed jump shot from Mullaney as time expired yielded raucous celebrations from the Yale bench.

“We got the shots we wanted to win the game,” said Delaney-Smith. “But again, its young kids taking the shot, rather than veterans taking the shot. [...] We need to get consistency. I thought everybody worked really, really hard, and we weren’t mistake free but we’re too young to be mistake free. [...] They’re great players, but we’ve struggled with consistency.”

Echoing what has been said about her team all year, Delaney-Smith views the Crimson’s biggest weakness this season to be its youth and inexperience. With four starters and a plethora of key reserves returning and a stellar recruiting class on its way to Cambridge, Delaney-Smith and her team will try to build off of their up-and-down Ancient Eight campaign as they head into the offseason.