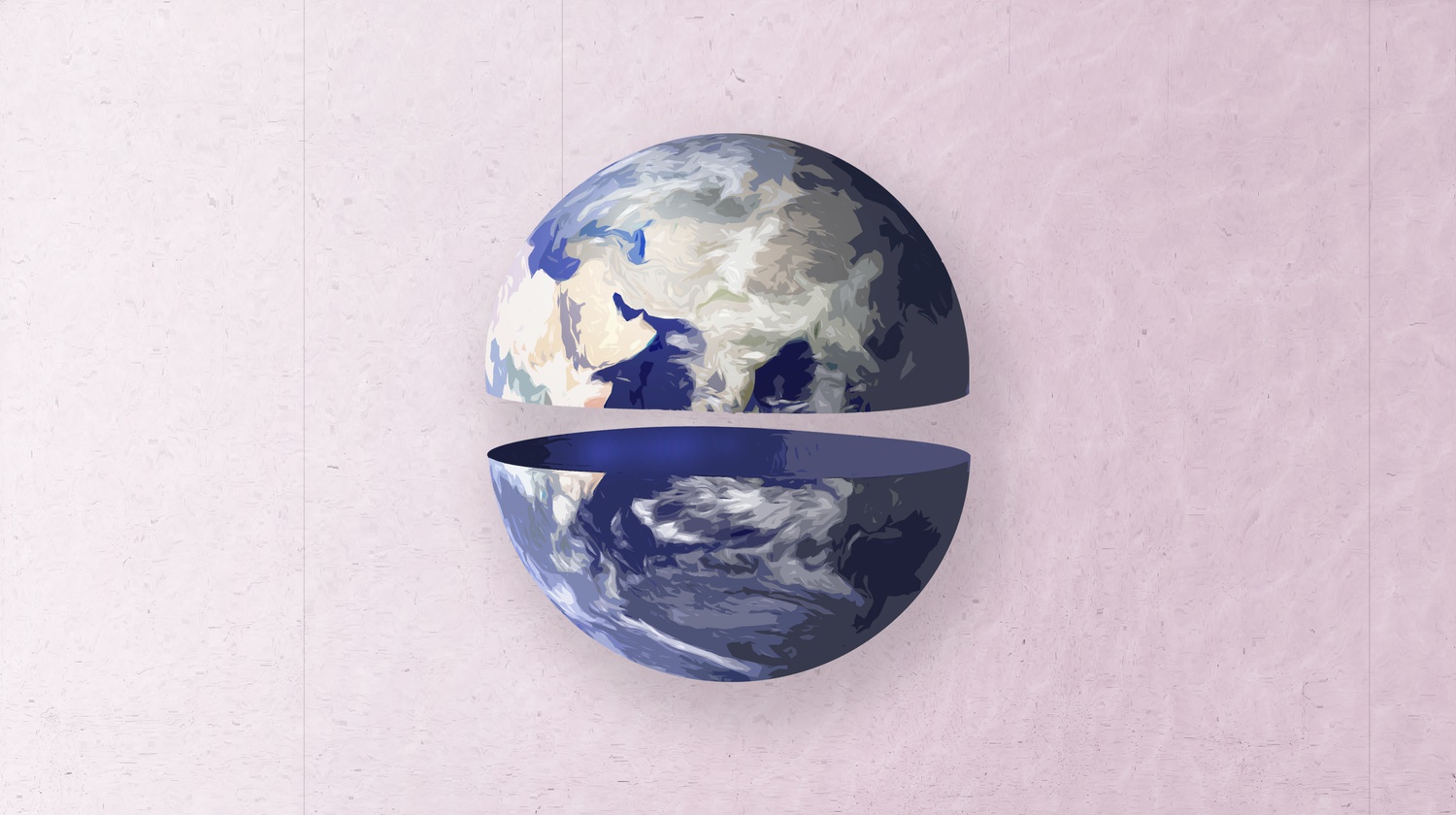 Separate Because We Aren't

All we can do is wait it out, co-regulating each other’s quarantine-induced neuroticism in our own sort of homeostatic system that harkens back to Gaia herself, trying to bear in mind the reason we’re doing this in the end: to sustain life.
By Tyler T. Johnston

James Lovelock was at a loss. After years working for NASA on a project exploring the possibility of life on Mars, he’d encountered a question he couldn’t quite answer: What exactly made the atmosphere of Earth different from that of our sibling planets, and how is ours kept so stable? How has our planet been so suited to life for billions of years, while Mars remains sterile and barren?

Then, one afternoon in 1965, it hit him. Recalling the moment in a book years later, he wrote, “My mind was well prepared emotionally and scientifically and it dawned on me that somehow life was regulating climate as well as chemistry. Suddenly the image of the Earth as a living organism able to regulate its temperature and chemistry at a comfortable steady state emerged in my mind.”

This would later become known as the Gaia hypothesis: a theory which proposes that Earth can be best understood as a single living organism, modifying its planetary environment to produce the conditions necessary for its survival. In this single being, various organic and inorganic components work in unison to form a self-regulating complex system, seeking an optimal physical and chemical environment for life. In other words, Earth is not just the home of life as we know it; it is, in some meaningful sense, alive.

The name was suggested by Lovelock’s friend William Golding, author of “The Lord of the Flies,” who lived in the same town as him. Gaia was the Greek goddess who personified Earth and was understood to be the ancestral mother of all life, perhaps known more commonly as “Mother Earth.”

In 1971, while fleshing out the initial hypothesis and fitting it to established concepts, Lovelock was joined by Lynn Margulis, a biologist and evolutionary theorist famous for advancing the now-widely accepted theory of symbiogenesis: an evolutionary theory holding that prokaryotes in symbiotic relationships formed the first eukaryotic cells. In other words, she worked to show that multiple living organisms could, through close cooperation, become mere component parts of a greater, living organism. Her initial paper was rejected by about 15 scientific journals, as she remembers. Yet decades later, the theory would enter the mainstream.

The Gaia hypothesis, which she would go on to champion alongside Lovelock throughout the twentieth century, still faces sharp scrutiny today. Critics point out that a basic criterion of life is an origin rooted in natural selection and an ability to replicate and pass on genetic information to offspring, while the Earth clearly didn’t come from planets and can’t create more planets. Evolutionary biologist Stephen Jay Gould succinctly criticizes the Gaia hypothesis as describing “a metaphor, not a mechanism.”

But at a time like this, in the midst of a global pandemic, the importance of metaphor can’t be overstated. I can’t make any claim to the scientific utility of Gaia, but I can present an argument for its social utility: Gaia posits that life sustains itself through self-regulation, and as a threat to life is emerging, a regulatory response is demanded.

Confronting COVID-19 successfully requires us to develop a constant and severe sense of social responsibility, understanding the choice not to wash one’s hands or practice social distancing as not just a question of personal risk tolerance but instead a question of epidemiological momentum. Any given death reported on the news could be traced back through an unknowable number of transmission events, eventually implicating someone whose mortal sin was as vapid and commonplace as touching a door handle minutes after a forgotten cough, shunning social distancing guidelines to see an old friend, or deeming a late-night ice cream run “essential business” (as I’m often tempted to do).

Even when we feel fine, long incubation periods and the potential for entirely asymptomatic cases endow our every action with potentially fatal outcomes, often borne not by ourselves, but by a more-vulnerable stranger many stages of transmission later.

We’re interdependent far beyond the limits of conceptualization; as is the case with sets of long numbers and infinite possibilities, the human brain struggles to hold within it the magnitude and reality of exponential spread. In light of this, public health officials use simple metaphors to engender social responsibility — imagining spending time indoors as ‘flattening the curve,’ or a country as ‘waging war’ against an invisible enemy.

Yet the metaphor I keep returning to is Gaia, far removed from its biochemical and ecological origins. The metaphor suggests that life, despite its many faces, is a singular noun, a project in which we’re all partaking. From this perspective, that which threatens the most vulnerable in society threatens ourselves. Even if our particular body isn’t at risk, our life is — the life we experience as a constituent, interdependent component of Gaia.

In my more cynical moments, the metaphor begins to feel corny at best, and pseudoscientific at worst. Yet its utility, and the fact of our interdependence, remains. The butterfly effect isn’t just a possibility here — it’s an inevitability — and those who rely on me most are likely those I’ve never met, yet am inextricably connected to.

The use of Gaia as a metaphor to confront such existential threats isn’t new; entire books have been written using the hypothesis to conceive of climate change and rapid human influence on a planet prone to feedback loops and adaptive responses. But a pandemic, in particular, makes apparent the easily-forgotten fact that our spheres of influence are universal in nature. Epidemiology is, in a sense, quantifying the extent of this connectedness, and now we’re tasked to recognize it.

But beyond fostering social responsibility, the metaphor of Gaia could offer us the stamina to endure this unprecedented social and economic ice age. I’ve tried to keep interdependence in mind as I’ve spent that past month living in quarantine, isolated from literally everyone I know, apart from my two roommates.

Though I deeply appreciate their company, I’m beginning to feel we’re more like fellow lighthouse keepers than friends, the three of us stranded on the remote, stony island that is our first-floor apartment while a biblical month-long storm that can neither be seen nor heard traps us perpetually indoors. All we can do is wait it out, co-regulating each other’s quarantine-induced neuroticism in our own sort of homeostatic system that harkens back to Gaia herself, trying to bear in mind the reason we’re doing this in the end: to sustain life.

A lighthouse keeper endures such isolation as a public service, a burden made entirely bearable on account of its utility, saving the life of sailors who have never met the lone keeper yet depend entirely on their service. In this same spirit, living in quarantine can be correctly understood as an uncomfortable yet intrinsically life-saving endeavor. Distancing from each other is crucial not in spite of, but precisely on account of, our fundamental interdependence and the impact we can have on even those we’ll never meet.

Maybe the Gaia model of Earth as a single organism is an oversimplification drawn more from Lovelock’s science-fiction background than empirical biology, yet its implications for human society hold unique value at this moment — even in isolation, we’re reminded every day how connected we are. This crisis (along with the compounding climate crisis to come) casts us not as protectors of an “I” but instead a collective “we.” In order to save ourselves, we’ll need to stay in our lighthouses a bit longer.

— Magazine writer Tyler T. Johnston can be reached at tyler.johnston@thecrimson.com. This is the second installment of his column about counter-theories of selfhood, “Who’s Driving this Thing Anyway?”