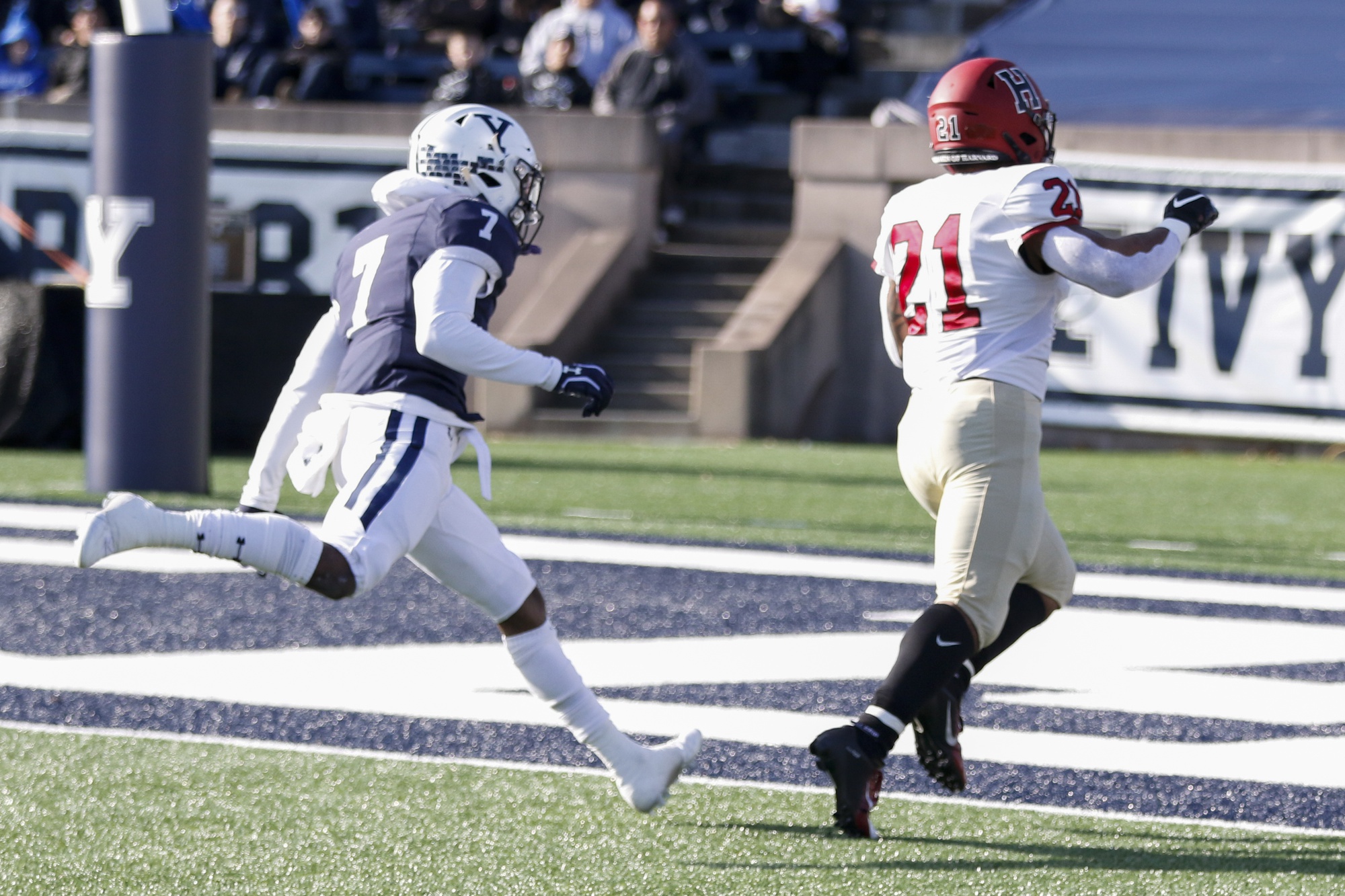 Catch Him if You Can: Aidan Borguet vs. Yale, Individual Performance of the Year

By Cade Palmer, Crimson Staff Writer
Borguet speeds past defenders into the Yale endzone, one of four times he would do so in his dominating performance. By Timothy R. O'Meara

The 136th rendition of The Game would prove historic in more ways than one. Protestors occupied the field during halftime, stalling the second half of play for roughly an hour. The game proceeded into near-darkness as a result of the delay and the 105-year-old Yale Bowl’s deficiency in the area of lighting fixtures. The Bulldogs overcame a 17-point deficit and completed the comeback with a victory in the second overtime. And, Harvard’s unassuming first-year running back Aidan Borguet set the rushing record and tied the scoring record for the historic rivalry.

A Franklinville, N.J., native, Borguet’s talent was immediately recognized by the coaching staff, and they gave him snaps in his first collegiate contest against San Diego. In this inaugural contest, quarterback Jake Smith dished him the ball three times, on which Borguet netted eight yards. By the second contest, he had found his sea legs and took 11 carries for 84 yards and his first score against division rival Brown — his season’s most productive contest exempting Yale.

“We know he’s a terrific player,” Harvard Coach Tim Murphy said. “He’s one of those kids where you don’t know quite what you have until you have it.”

With the Crimson’s run-by-committee lineup, Borguet spent the season trading reps with junior running back Devin Darrington and junior wideout B.J. Watson, who took screen passes to the wing. Entering the contest with the Bulldogs, Borguet had accrued half as many carries and nearly half as many yards as Darrington. The Yale Daily News’ preview of the contest listed Darrington and Smith as the “anchor[s]” of the Harvard offense, exempting any mention of Borguet.

To be sure, Darrington took opening reps at the spot for the Crimson in that November contest. Borguet didn’t touch the ball until late in the second quarter. Just inside the two-minute mark, on first-and-10 from the Bulldogs’ 47, Borguet got the give and took it the distance. The sprint, which pushed Harvard’s lead to 12, would be the shortest touchdown run of Borguet’s four-score day.

The Bulldogs exhausted the rest of the first-half time, and Harvard took the opening kick of the second half. When the Crimson offense entered the field to open the final half of play, so too did Borguet. Smith tossed an errant throw before returning to the first-year back, who netted four yards on the give. Smith went to the air twice more, both falling incomplete, but a pass interference against Watson reset the downs. Borguet took Smith’s ensuing give the required 59 yards for the score.

Harvard’s next offensive drive proceeded in much the same manner. Borguet ran first for five yards, and took the next give for 60 and six points. The Crimson assumed a 16-point lead, up 29-13.

“We don’t really focus on the scoreboard,” Yale quarterback Kurt Rawlings said. “I mean knowing how much time is left is important. I just tell them, ‘guys, enjoy these last moments, enjoy the moments in the game, just take it all in and have fun, do your job and just have fun.’”

A drive that featured Darrington disrupted the Borguet streak. That drive, hamstrung by a sack and a pass that lost five yards, could not be salvaged by Darrington’s 13-yard sprint. Harvard punted and Yale quickly returned the favor.

In the crescendo of the Crimson's productivity in the contest, Borguet took the second snap of the drive the full 67-yards to the endzone. His fourth score of the evening placed Harvard in good position, ahead 36-19 with 13 minutes left to play. As for Borguet, the run was but his sixth of the afternoon. Here, against the soon-to-be Ivy League champions, the breakout running back had averaged 40.3 yards per carry.

The Crimson went to the Borguet five more times throughout the contest. He finished with 11 carries for 269 yards, in addition to affixing his name to two rivalry records. During the postgame press conference, a lone coach Murphy praised his first-year back after speaking to the pain of the loss.

“He’s a tremendous football player and a great competitor,” Murphy said. “He’s got great physicality and he’s got finishing speed. The irony is that he was a triple-option running back with his hand on the ground.”

“Aidan’s a very patient runner,” Murphy said. “He’s a very strong runner, he’s got good vision and balance, and he’s a hell of a football player.”