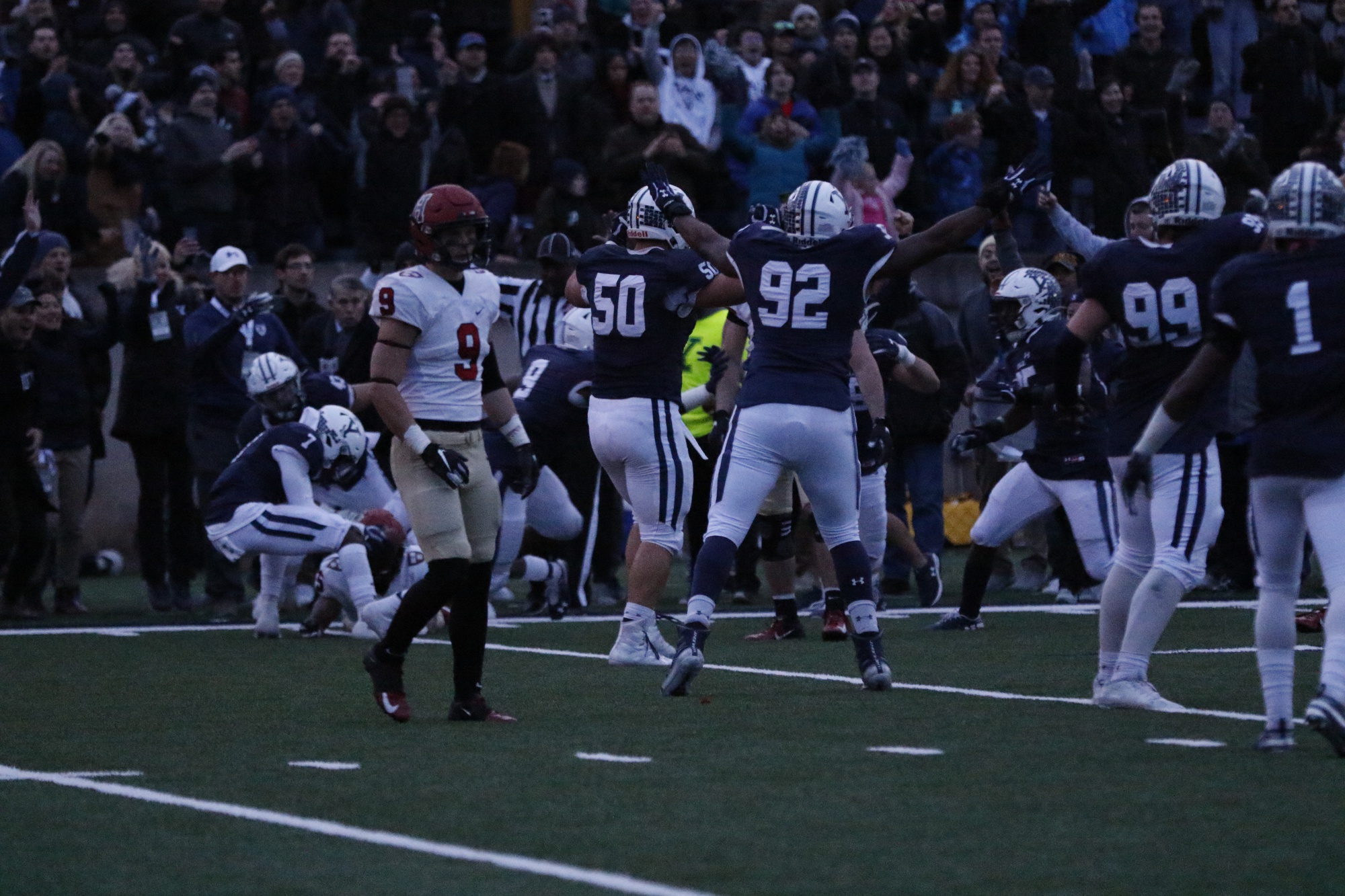 The Game for the Ages: Football vs. Yale, Heartbreak of the Year

By James Joyce, Crimson Staff Writer
Yale pulled out its heart-wrenching comeback amidst the cover of darkness thanks to the Yale Bowl's lack of lights. By Timothy R. O'Meara

With four minutes remaining in the 4th quarter, The Game was Harvard’s to lose.

An afternoon of passion and protest had propelled the Crimson to a 36-22 lead, leaving the Bulldogs down two touchdowns and stranded on their own four-yard line. It should have been over right then and there. Already, locals of Cambridge and New Haven alike were emptying out of the Yale Bowl, weary from what may have been the longest contest in the 136-year history of The Game.

But this is Heartbreak of the Year, not Uneventful Ending of the Year. You know what’s coming.

Kurt Rawlings’ first miracle was a feat of consistency. The Yale quarterback completed six of his next eight pass attempts, bringing the Bulldogs ten yards short of diminishing their deficit. After one last toss, Rawlings did just that – no bark, all bite.

“[Rawlings was] just incredible, not just today but whenever they needed a play this year,” Harvard coach Tim Murphy said. “The sort of connection he has and his ability to make big plays are things that are other-worldly.”

With 1:28 to go, Harvard’s lead had been cut in half. An onside kick attempt by Yale was successful, leaving Rawlings and Friends® 50 yards away from forcing overtime. Yet again, consistency was key – a series of completions mobilized the Bulldogs, sending the squad into the red zone. Here’s where things got tricky. On the next play, finding no open receivers, Rawlings narrowly escaped the pocket – only to take a headfirst dive straight into the pads of Crimson linebacker Jordan Hill. The pigskin came loose. Harvard attacked.

“What [my team] was able to do in this game requires power, but even more so requires the ability to have complete faith in the other guy,” Yale coach Tony Reno said. “And that’s what happened.”

In an act of raw strength, Bulldog senior Cameron Warfield plucked the ball from the pile of Crimson defenders, a recovery that left Yale a mere seven yards away from championship contention. With less than 20 seconds to go, Rawlings did not disappoint. A toss down the middle and successful PAT tied the game up, sending the stadium into overtime.

However, darkness was beginning to descend upon New Haven. Although the game began in the early afternoon, a halftime protest by students from both universities had delayed the contest by over an hour. The Yale Bowl lacked stadium lights (how’s that for gothic architecture?), and with the sun poised to set in just a few minutes, dusk had overtaken the field – an environment to which Harvard was unaccustomed.

“You just deal with the circumstances that you have,” said Murphy of the blackout. “You don’t make a big issue with your team, it just is what it is.”

And thus, overtime began. Yale won the toss and deferred, allotting the Crimson first dibs. A 25-yard pass by Harvard quarterback Jake Smith to receiver Cody Chrest was good, adding seven to Harvard’s point total. The Bulldogs did not back down though. A pair of completions allowed Yale to match its opponents, tying the game for the final time.

The next possession went to the Bulldogs. Two swift Rawlings passes brought Yale four yards from the endzone, and one final rush secured the touchdown.

It was ten minutes past sunset, and Harvard had one more chance to curtail the Bulldogs’ comeback. Smith’s first pass was incomplete. A second-down rush by running back Aidan Borguet amounted to only five yards, in spite of the freshman having taken 11 carries for 269 yards over the course of the contest. With two downs to go, Smith lobbed the ball to junior BJ Watson for no gain.

The Crimson had one more shot. Up by a touchdown and used to competing in the dark, The Game was now Yale’s to lose.

Yale did not lose.