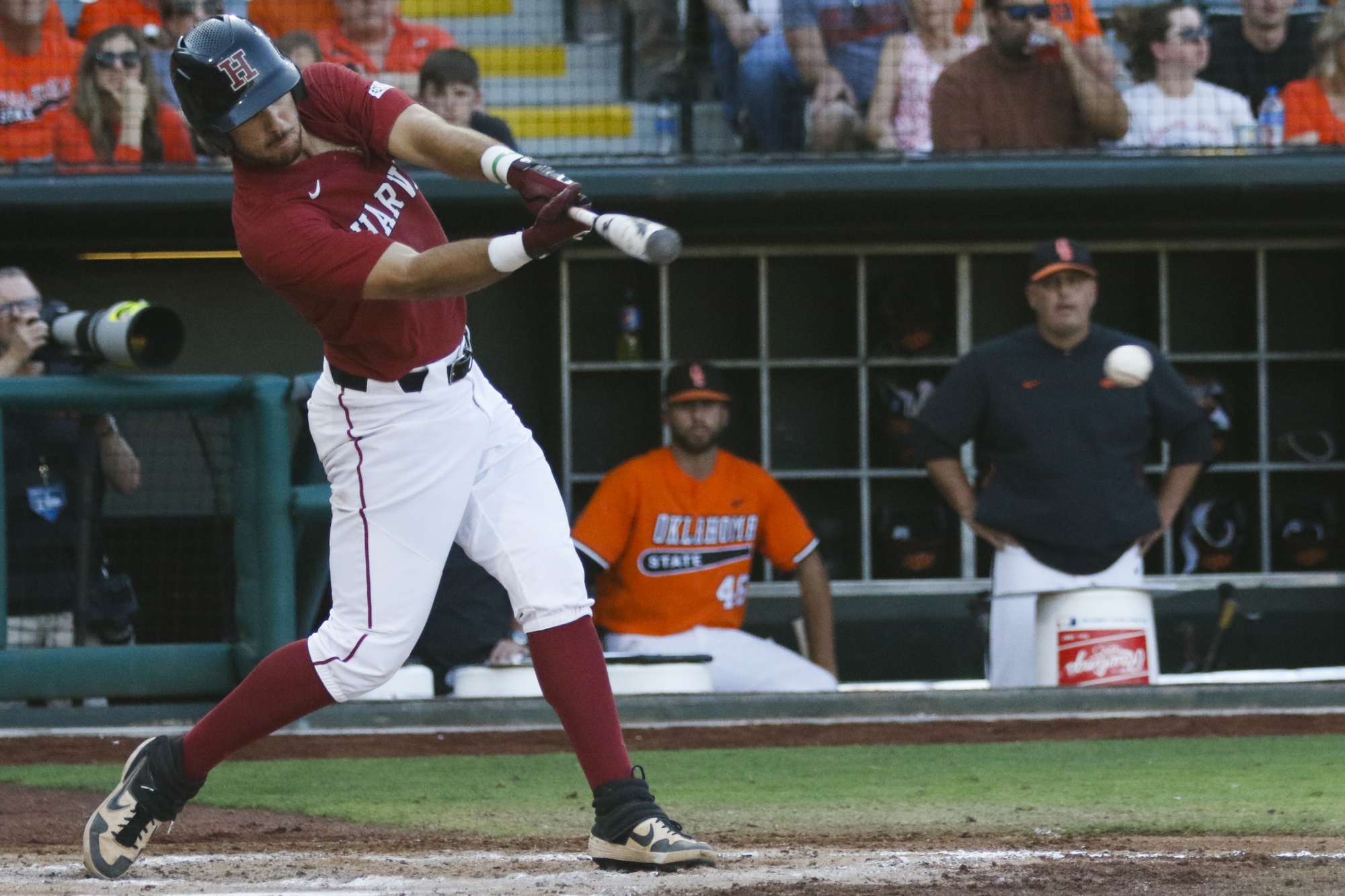 Senior outfielder Jake Suddleson connects against Oklahoma State in the 2019 NCAA Tournament, a common occurrence for the 2019 Ivy League Player of the Year. By Timothy R. O'Meara

This isn’t how it was supposed to end. In a perfect world, the Harvard Baseball team would have just wrapped up our first title defense in over a decade, and we would be preparing for an upcoming NCAA regional. Instead, we’ve been at home facing a new reality. We’ve traded our batting gloves for surgical gloves, and we've replaced our helmets with face masks. Virtual Zoom meetings stood in for class. Makeshift at-home workouts must suffice in lieu of practices. And without games, we fantasize about what could have been. We’ve confronted the reality that there will be no possibility of a dog pile this year, and our hearts are broken because of it.

My baseball career started as an infant. Most toddlers’ first words are somewhere along the lines of “mama” or “dada.” Instead, the first word out of my mouth was “ball.” For months, that was all I would say: “Ball, ball, ball, ball.” My parents finally bought me a plastic baseball bat and ball, which quickly became my most precious toys. I would set the ball up on a plastic tee, hit it, and chase it down countless times every single day. I haven’t put down the bat and ball since. At that moment, baseball became my life.

Baseball is a game of failure. Those who’ve been around the game should have heard that said to them time and time again, and if you haven’t been around the game, you can easily understand this fundamental fact by looking at batting statistics. As an example, the best player in the National League in 2019 got a hit about three out of every ten at-bats, putting his rate of failure at about 70%. If you fail 70% of the time in almost any other profession, your employer will simply fire you. But in baseball, a 70% failure rate makes you one of the best in the sport. Baseball is a game of failure because there is so much out of a player’s control. In any at-bat, a batter can hit the hardest ball of their life, and it may still end up in a fielder’s glove. A batter can hit a ball that, at most fields would be a home run, but at a uniquely large field is just a deep flyout. A batter can quite possibly do everything right, and still not get a hit. For every home run, there is a strikeout. For every win, a loss. And for every championship, a season ended too soon. In a world defined by measurable success, this amount of failure can be debilitating for those who let it. Baseball forces you to confront failure and to reframe what it means to succeed. You have to focus on what you can control.

In baseball, the two biggest things you can control are preparation and frame of mind. Preparation, putting in the work, gets you into the best possible position to succeed at any given moment. In the physical sense, this means pushing yourself to the limit in the weight room, putting in extra time in the batting cage, and taking care of your body. It also means getting your schoolwork done efficiently so you have extra time to study as much game film as possible. Then, you have to trust that preparation will support you in the moment, that the physical and mental preparation will manifest cohesively come game time. You cannot control what pitch a pitcher will throw, or where he throws it, or the outcome. But you can control your preparation for that at-bat and therefore how you react in the moment. All of this is easier said than done, but I’m a firm believer in the idea that hard work pays off.

Winning the Ivy League Championship in 2019 was so satisfying because of the work we put in as a group, our collective struggle. Nobody saw the 5 a.m. wake-ups. Nobody saw us running stadiums until our legs felt like lead, the two-a-days, the extra time spent in the Murr weight room, the hours of cage work we put in. Nobody saw us get back to campus at one in the morning from a road trip only to stay up studying in the dining hall for exams the next day. In some ways, receiving our championship rings in the fall validated the time we spent on practice instead of schoolwork and the summers we spent playing baseball rather than working or relaxing.

As evidence, take our marquee win that year, our first game against Yale. We entered the bottom of the ninth inning down by seven runs. We quite literally had a mountain to climb, but if you looked in our dugout, there was no panic. It felt a lot like looking up the steps of Harvard Stadium when you are already an hour into conditioning, about ready to pass out from exhaustion but knowing that there was more work to be done, that those steps would need to be climbed again before the day was through. It’s daunting. But not until you remember that you’ve climbed those steps hundreds of times before, by putting one foot in front of the other until you reach the top, do the distance and the struggle melt away, and the far off goal becomes a tangible reality. So that’s what you do, over and over again, one step at a time until you can see the Charles River snaking into the distance.

The situation we found ourselves in that day against Yale was no different. Seven runs is a lot to overcome in one inning, but the approach was the same. We focused on one at-bat at a time, one pitch at a time, until we found ourselves out on top. That momentum made us feel invincible; there was nobody who could get in our way after that game. That’s not to say we didn’t find ourselves in situations like that again that year. We did, several times. But we took the same approach, step by step, pitch by pitch, and never gave up. I look back on 2019 as a testament to our resilience. There were undoubtedly situations where we may have been down, but we were never out.

We find ourselves now in unprecedented times. The Covid-19 pandemic completely upended our lives. For the seniors, our time on campus got cut short. For student-athletes, seasons evaporated into thin air. For many, the jobs and internships they had worked hard to obtain have been canceled or postponed. For many more, the consequences have been far worse than just a lost job or season. The future seems uncertain, more uncertain than any of us had planned for. A great philosopher once wrote “that each of us lives only in the present, this fleeting moment of time, and that the rest of one's life has either already been lived or lies in an unknowable future.” Uncertainty about the future isn’t anything new; it is just the nature of the uncertainty that’s changed.

So what is there to do? The same philosopher also wrote that if you fail to see the proper course, then you should “move forward with due care as far as your present resources allow, holding firm to whatever seems just.” We proceed one step at a time, pitch by pitch, moment by moment, using our preparation in the past to inform our actions in the present, and we focus on those things that are within our control. In the immediate, that means listening to health officials, heeding social distancing guidelines, protecting those who are most vulnerable, and doing whatever we can to slow the spread of the novel coronavirus. And while we bide our time, we watch the game film, we read a new book, we continue to better ourselves. We prepare, in any way that we can, so that when the game time finally arrives (and it will), we can hit the ground running.

No, this wasn’t how my time at Harvard was supposed to end. But, with new challenges come new opportunities. And with new opportunities come new experiences. I’ll miss those long nights in the dining hall, the road trips with my teammates, the late-night runs to El Jefe’s and Felipe’s. I’ll even miss the 5 a.m. wake up calls, the moonlit walks across the river in sub-freezing temperatures, and the feeling of looking up at Harvard Stadium when my legs feel like jelly. I’m eternally grateful to all Harvard gave me, and though the future is undoubtedly uncertain, I plan to continue the only way I know how: by controlling what I can, by releasing what I cannot, by moving forward one step at a time.