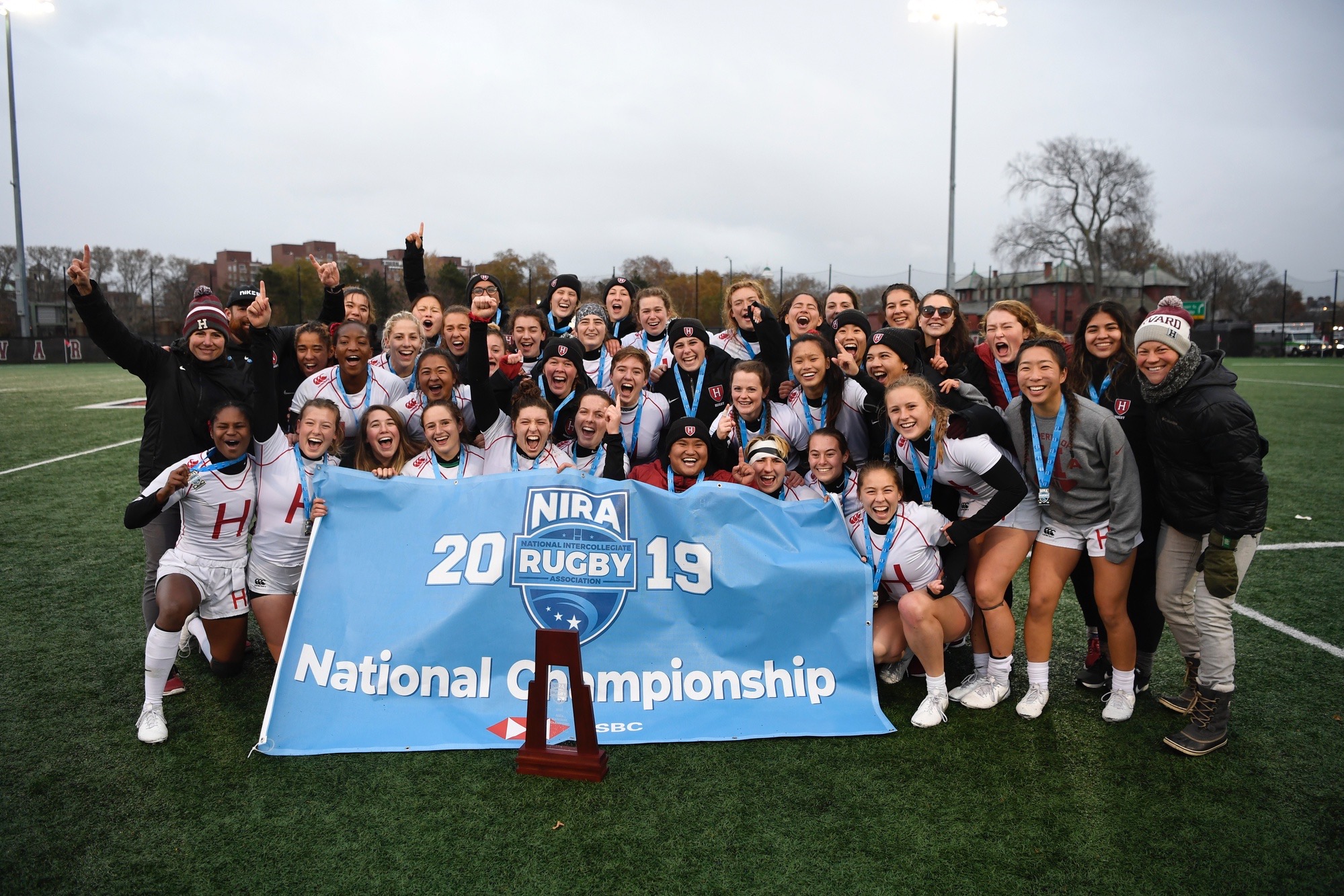 It's Lonely at the Top: Women's Rugby, National Champs and Team of the Year

By Lucy Connor, Crimson Staff Writer
The national champions pose with their medals, trophy, and banner. The Crimson would lose just twice over the course of the season...before later avenging both losses (to Dartmouth and Army West Point) in the playoffs. By Courtesy of Gil Talbot/Harvard Athletics

On Mignone Field, in front of a large and boisterous home crowd, the Harvard women’s rugby team defeated Army West Point 18-7 to be named the 2019 National Intercollegiate Rugby Association (NIRA) National Champions for the first time in program history. After a season full of adversity and a couple stinging losses, the team pulled together to achieve a historic season.

In 2017, Harvard named Mel Denham the new head coach of women’s rugby at Harvard. While the team has managed to be extremely successful in the past few years, it has experienced a lot of rebuilding and preparation in order to be great. This year the team combined all of the hard work and perseverance from the past few years in order to be crowned the 2019 National Champions.

“This championship was built by more than just this team, but by the generations of Radcliffe Rugby before us that brought our team to this level through their hard work and example,” junior Gabrielle Fernandopulle said. “We are most proud that we won together, as a family.”

Harvard dominated most of its regular-season competitions. In both games versus the Quinnipiac Bobcats, the Crimson won by a margin of over 45 points. Harvard managed an impressive shut-out against Notre Dame College (Ohio), where the Crimson scored over 100 points. The team also defeated its Ivy League competitor, Brown, 42-14 to end its regular season. Harvard’s only loss of the regular season was against Army West Point in early September — a loss the Crimson was able to avenge at the very end of post-season when it mattered most.

A key feature of this momentous season was the rivalry between Dartmouth and Harvard.

Two years ago, the Crimson fell to the Big Green in each of its three matchups. Dartmouth retained its Ivy League title for the third year in a row.

Early in the season last year (2018), Harvard fell to Dartmouth in a blowout, 55-13. But the Crimson was able to find the strength to defeat the Big Green in the Ivy League Championship, earning only its second Ivy tournament title in program history. Just a few weeks later, however, Dartmouth crushed Harvard’s dreams of becoming National Champions, with a 19-14 victory in the NIRA National Championship.

The back-and-forth of wins and losses between these two Ivy League contenders failed to cease this season. The Crimson enjoyed an important victory against the Big Green early in 2019, winning comfortably, 50-32. But about a month later, Dartmouth retaliated in the Ivy League Championship. On Harvard’s turf, the Big Green reclaimed the Ivy League title, 41-22.

Two weeks later, the two teams met again at Mignone field to compete in the NIRA tournament semifinals. Both teams played an aggressive game, recognizing its importance: the opportunity to play for the National Championship title, or the end to a long, demanding season. Penalty kicks and tries alternated between the competitors for the two, forty-minute halves, and the outcome of the game was decided in the final couple minutes. Down two points with just over a minute left to play, junior Milan Roberts put the Crimson on top, 23-22, with a successful penalty kick. Dartmouth was unable to answer, and Harvard was on its way to the National Championship match.

Following the Crimson’s loss to the Big Green in the Ivy Championship, senior captain Emily Prentice was asked about the Harvard-Dartmouth rivalry.

“We make each other better and we push each other. Having Dartmouth in the Ivy League with us is just not only helping our team advance, but it also helps advance Ivy League rugby in general,” Prentice said. “It’s exciting because at any given point it could go either way. It is a really special opportunity to play them multiple times a year.”

Needless to say, the rivalry between these two Ivy League schools was present and profound in the 2019 season.

But the season did not end with the crucial win over Dartmouth. Harvard still had to face the team who handed it the only loss of its regular season: Army West Point. Once again, the Crimson had the advantage of playing on its home field in front of a large home crowd, and the opportunity to take revenge for a previous defeat.

While the Black Knights scored a try within the first few minutes, the team did not see its end zone a second time. Harvard responded with 18 unanswered points to secure the win, 18-7.

On this freezing, snowy day in November, the Crimson was named NIRA National Champions in front of friends, family, and other Harvard rugby supporters. 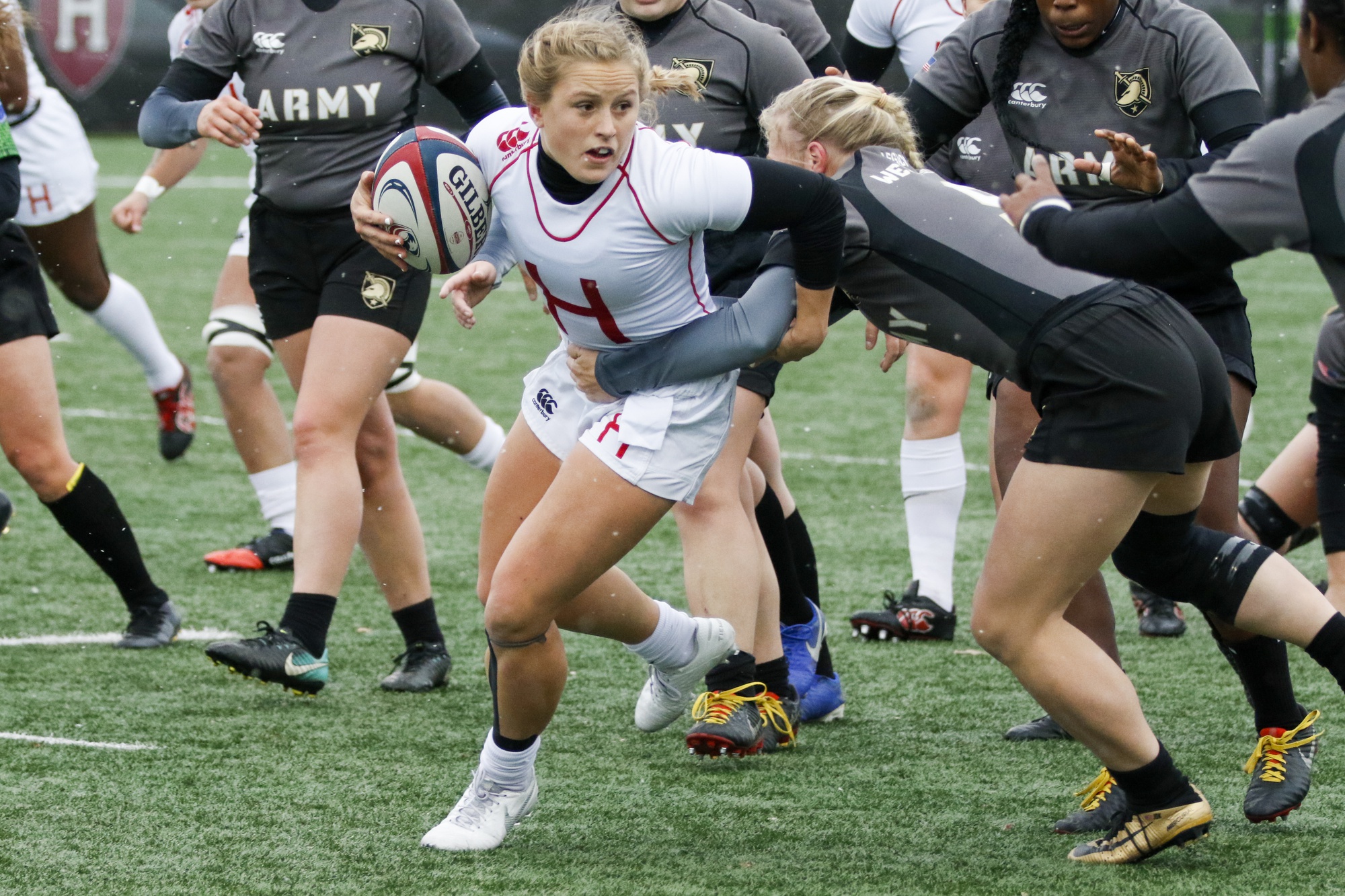 Sophomore Cassidy Bargell looks to elude the Black Knights' defender. In the game, while Army attempted to wrap up the Crimson, Harvard wrapped up the season in victory: with a national championship. By Timothy R. O'Meara

“The crowd we had was amazing; having fans who showed up even in the weather created such an incredibly unique experience for all of us,” Prentice said. “Having all of that support from the department, the student body, other teams, and our friends made all the difference. It meant so much for us to win the National Championship in front of everyone.”

The road to becoming National Champions was strenuous and intense, but the team was able to perform at its best in the final moments of the rugby season and will undoubtedly be remembered as one of the greatest teams in the program’s history.