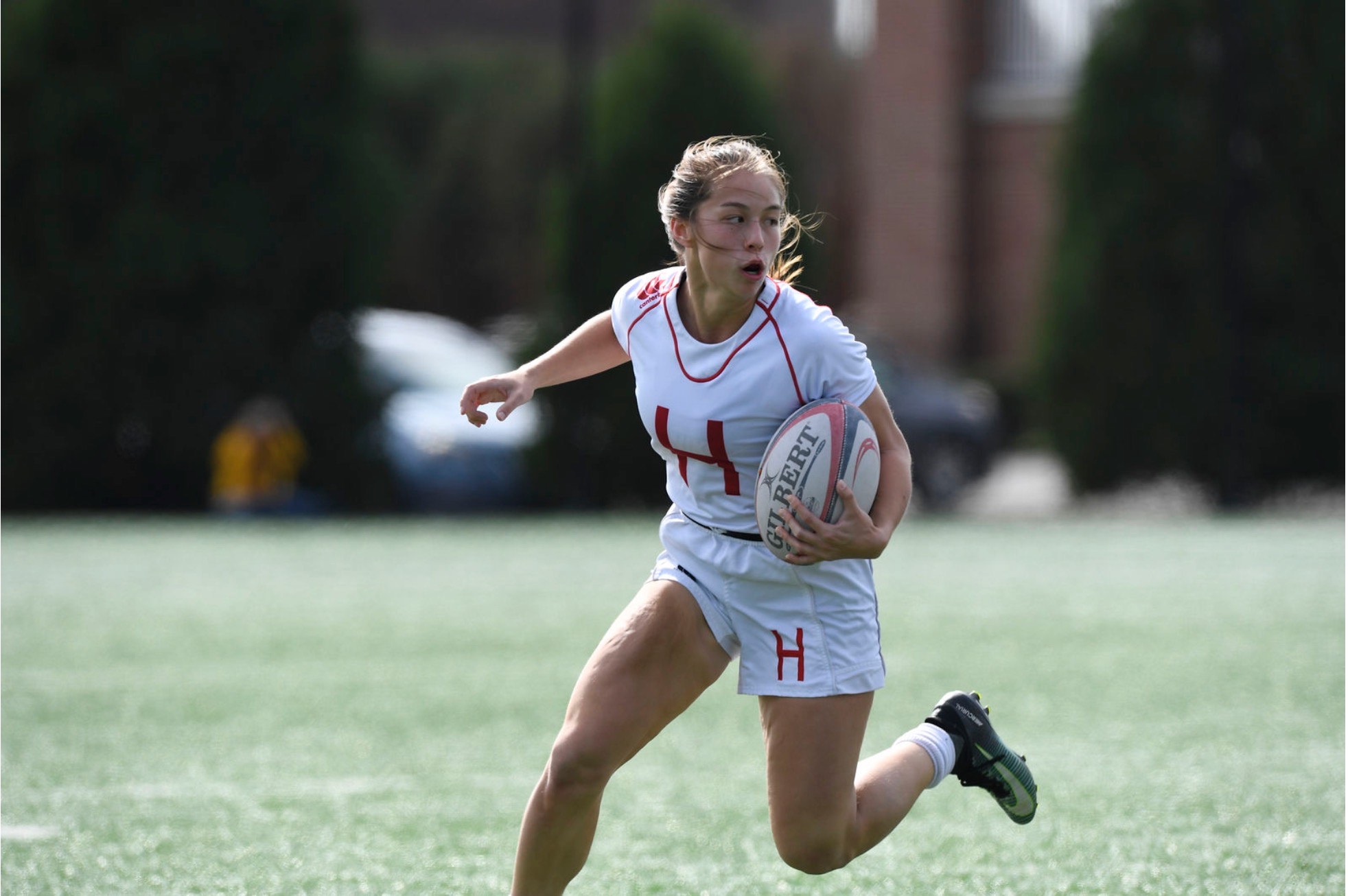 In a normal year, Fella would be donning the Harvard uniform and advancing the ball downfield. By Courtesy of Sofie Fella
By Derek Schaedig, Contributing Writer

In 2018, a record-high 42,749 students applied to Harvard College. Of those, only 1,962 students received admission, a mere 4.6% acceptance rate — fitting for an institution known globally for its high standards and competitive admissions process. Of those admitted, only 12% were international students and approximately 15% were student-athletes. Rare and remarkable are those who fall into both categories. Few and far between, these students manage to balance a globally respected academic course load with a rigorous, unforgiving athletic schedule. One such student-athlete is Sofie Fella ‘22, a varsity women’s rugby standout born in Germany and raised in China.

Fella’s unique roots extend across borders. The Winthrop junior’s father is of German descent while her mother is from China. Fella was born in Germany, but after a few short months there, she and her family moved to Shanghai where she spent most of her childhood.

If you were to speak to Fella, her Chinese and German background might not be so evident, despite being raised outside of the United States. The Psychology concentrator with a secondary in Economics attended an American high school in Shanghai in her youth, so despite her German and Chinese roots, she flaunts an American accent. At home, she jokingly says that her family speaks “Chinglisherman” — a combination of the three languages her family speaks.

While Fella grew up in Shanghai, she began to develop an extremely dedicated personality — a trait she would later make use of in her impressive rugby and academic career. “I was a kid who would have obsessive phases or hobbies,” Fella said.

Fella began her search for an activity that she both enjoyed and that she could be successful at. Her first passion began at nine years of age as she began to play guitar. Years later, she then decided to put down the instrument in order to try her hand at acting. From there she moved to dance. After being described as “too muscular” to be a successful dancer in China — a falsely defined quality Fella is both proud to embrace and encourages all young women to take pride in — Fella finally moved on to athletics and began to play soccer.

“I was always this kid looking for ‘my thing,’” Fella said. As it turns out, soccer still wasn’t ‘her thing,’ though she was onto something. During her Sophomore year of high school, Fella found rugby — a sport that turned out to be her natural fit.

“Being able to supplement hard-work with a bit of natural talent, I was like, this is [finally] ‘my thing,’” Fella said.

After a long journey, Fella set her sights on college rugby. She began her journey to the Crimson through attending rugby camps around the United States. “I would go to whatever I could to improve my game,” Fella said.

Participating in her first Rugby camp in the United States, Fella impressed then head coach of Central Washington University, Mel Denham, piquing her interest in the young rugby prospect.

“I never thought about applying to Harvard,” Fella commented.

That is until she met Prentice. After some encouragement, Fella reached out to Denham and, recalling the star’s talent from years prior, Denham offered Fella a spot on the Crimson roster which Fella graciously accepted.

Fella proved over and over again that Denham made the right choice as she excelled in all facets of her life.

Before Fella stormed onto the Harvard scene, she was a captain at Shanghai American School’s Varsity Rugby Program. Her accomplishments there are plentiful, but possibly her most prestigious accomplishments include being a three-time most valuable player, a three-time athlete of the year, and earning a spot on the German U18 National Team.

Her success only continued once she made it to the Ivy-League ranks. In her sophomore year on the team, Fella and her teammates did what every college athlete dreams of: won the National Championship. Furthering her success, this past year, Fella was nominated as an All-American.

Beyond the classroom, Fella appears to be able to do it all while maintaining her academic and athletic success. She is the co-president of the Student Athletic Advisory Committee (SAAC) and the co-president of the newly formed Undergraduate Women of Harvard Athletics club. At the same time, she took on a marketing internship for Harvard Athletics mixed in between an extraordinarily busy student-athlete schedule.

Fella had found her rhythm in her life at Harvard until it was abruptly interrupted in January of 2020.

She had spent her winter break in Shanghai, catching up with friends and family as well as doing an internship for the German soccer powerhouse FC Bayern Munich. In late January, the COVID-19 pandemic became prevalent in Shanghai. When school began again in late January, Fella returned to campus two days before the United States government banned travel from China. Fella had felt like she had escaped the virus to the safety of the United States. She had no idea what was to come.

Concerned for her family and friends back home, Fella continued her studies until she was challenged by the virus again. In March of 2020, Harvard University students were forced to leave campus with just a few days’ notice. Stuck with no safe haven from the virus, Fella decided to stay in Boston in off-campus housing to prioritize her studies.

After the semester was complete and the virus raged on, Fella attempted to return to Hong Kong (where her family had recently moved). Fella then ran into yet another obstacle.

Fella, with her diverse roots, does not own a Hong Kong identification card, a prerequisite for entrance to the country during the pandemic. Thankfully, after a difficult process of dealing with government protocols and restrictions, she was finally granted entrance to the city.

Unfortunately, the journey had only just begun for the rugby standout. After a grueling 72-hour journey from Boston to Dallas to Tokyo to Hong Kong, Fella was then tested for the virus upon landing. Exhausted, mentally and physically, she then had to wait for her results in a hotel over the night. As if this was not trying enough, she was then given a tracker valid for two weeks that rendered her unable to leave her house: the government’s latest protocol in preventing further spread of COVID-19 within China’s borders. Perhaps necessary, one can imagine the added toll this took on Fella after months of stress and worry.

Once she was finally settled in Hong Kong, life returned to normal. Fella returned to training as well as seeing family members and friends. After seeing firsthand the chaos ensuing in the United States surrounding the pandemic, Fella again believed to have escaped the panic. That is until the end of June came around.

While the United States was still fending off its preliminary waves of the virus, Hong Kong experienced a third wave of COVID-19. Fella went from working out, playing rugby, eating at restaurants, and spending time with others, to a complete and abrupt absence of those activities.

Since then, Hong Kong has again thwarted the efforts of the virus and returned to a sense of normalcy. Fella’s up and down relationship with the virus rolls on.

Despite all of the obstacles the virus has thrown at Fella, she continues to maintain a positive attitude toward her circumstances. Fella cites her various transitions and living on her own as reasons she has grown in many ways.

“I’ve been forced to learn how to be an adult,” Fella said. “It kind of creates this maturity that we all need to be successful in the future.”

Fella even argues that online classes can prove to be beneficial for students. “I really learned a lot more self-discipline,” Fella said.

Being a student-athlete with a busy schedule, Fella has enjoyed the often unfound free time that COVID-19 has given her with an absence of rugby. She’s been able to re-engage with her love of guitar, spend time with family, and take time to reflect.

After her recent move to Hong Kong, Fella fell in love with the city and has found a new home.

“Through Rugby, I’ve managed to find a community and sense of belonging here [in Hong Kong],” Fella said. “I’ve only known these people for two months, but it feels like I’ve known them forever.”

Despite her optimism regarding the circumstances, Fella does not deny that there are some negatives to the pandemic.

“I miss hanging out with friends and roommates and the dining halls and socializing with people,” Fella said. “I miss playing rugby there [at Harvard]. I miss that normal routine we had.” 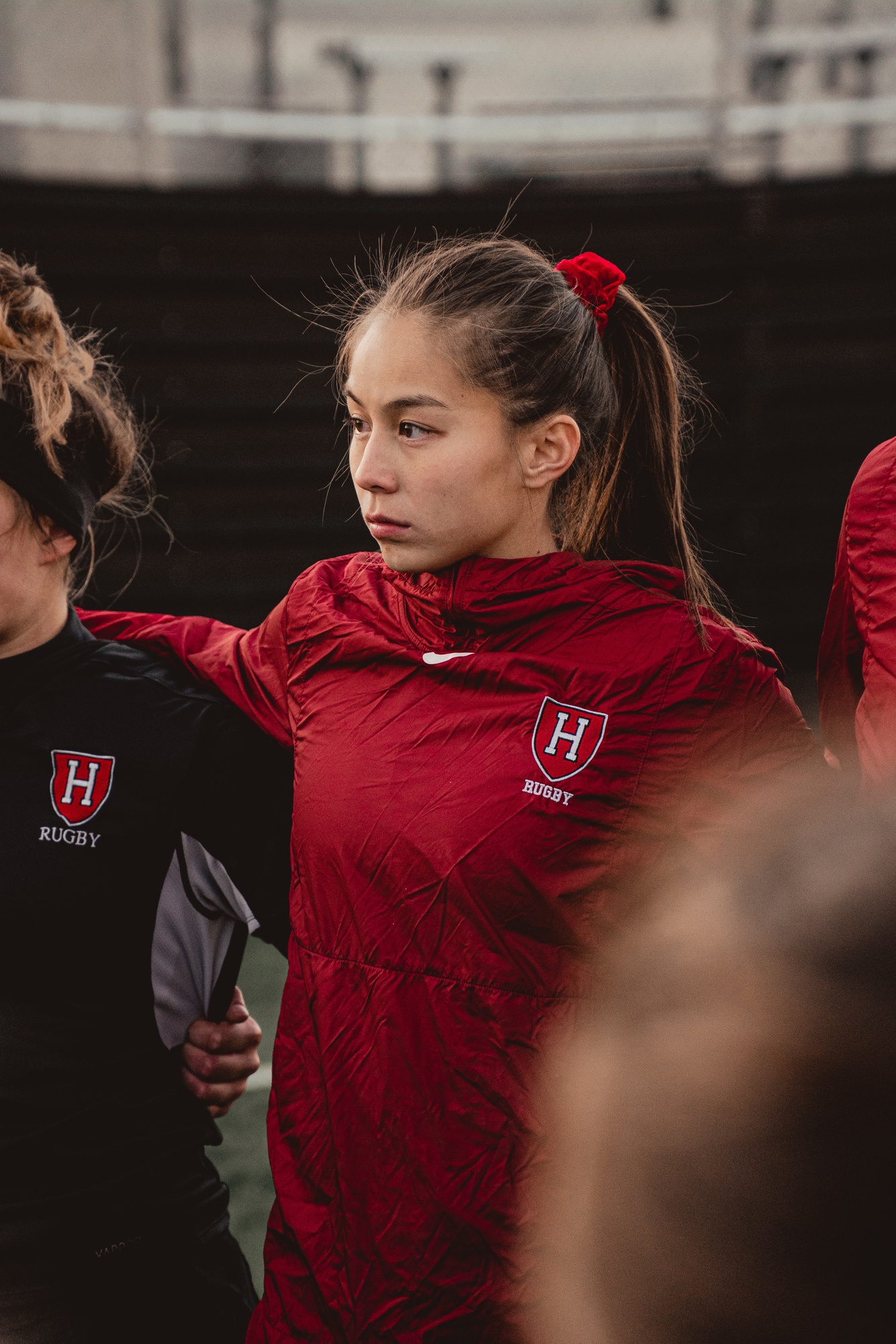 While Fella still will be able to maintain a training regimen during the pandemic, she and her other teammates will miss out on in-person camaraderie. By Courtesy of Sofie Fella

Nevertheless, Fella has learned a lot from her experiences this past year and plans to make use of these lessons in the upcoming semester.

Fella says that she needs to start her day early and get into a routine similar to what she had at school. “I think it would be smart for a lot of student-athletes to replicate what their schedule at Harvard would look like,” Fella said.

Because of the small class size and required attendance in Fella’s classes, Fella needs to attend lectures live and plans to make use of her new sense of self-discipline in order to stay on top of her studies. There is a twelve-hour time difference between Hong Kong and the United States, and Fella’s first lecture begins at seven a.m. in Hong Kong. She will begin her day early with a lecture, followed by a workout, working at her internship, playing rugby as long as the pandemic allows for organized sports, doing homework, and then attending her second set of lectures in the evening.

Fella has also had to get creative in her athletic endeavors in order to stay in shape during the quarantine. She has picked up yoga and hiking during the pandemic. The active culture of Hong Kong residents paired with the scenic beauty of the city and its natural surroundings has helped Fella continue to stay active.

“Hiking has been such a great way to stay in shape and connect with nature, talk to friends, and take some cool pictures as well,” Fella said.

This past summer, Fella participated in a virtual internship with Team USA Handball. With her daily schedule above, Fella plans to continue to stay busy in the fall at home in Hong Kong by enrolling in a full academic course load, maintaining her training regimen for rugby, as well as participating in an events and marketing internship for the Hong Kong Rugby Union.

Fella’s journey during the pandemic has been long and difficult. However, despite all of her obstacles, she continues to maintain a positive outlook on her life and continues to pursue excellence in everything that she does. One of the select few, Fella is a member of both the student-athlete and international student community — a title that comes with extreme challenges and is ridden with unique obstacles. Yet, she continuously rises above such speed bumps by balancing her social life, family life, academics, extracurriculars, and athletics. She approaches the fight we are all fighting, that against the pandemic, the same way she approaches her life: with hard work, optimism, and a smile on her face.