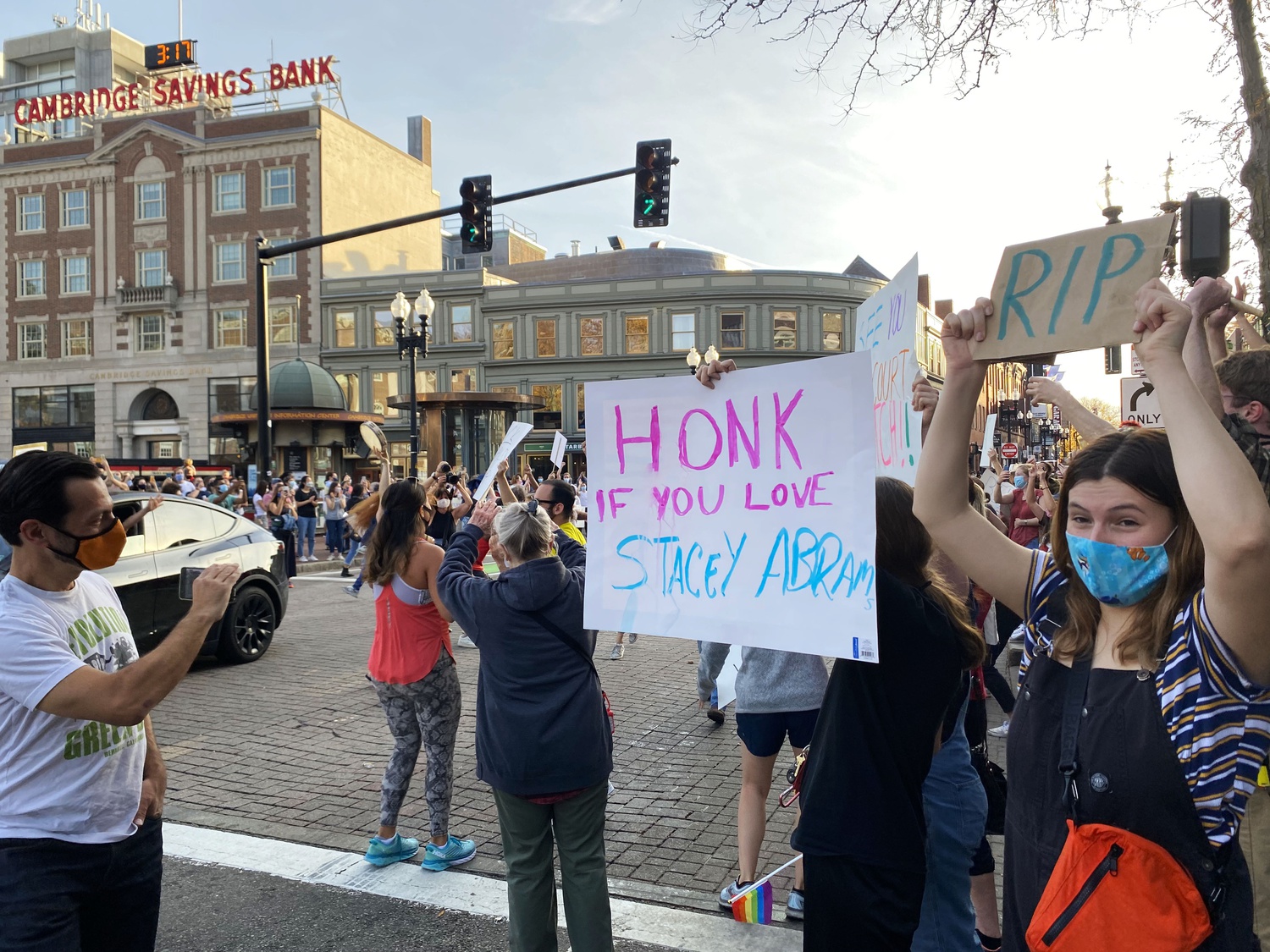 Following narrow victories for Raphael G. Warnock and T. Jonathan “Jon” Ossoff in the runoff elections for Georgia’s Senate seats, Harvard students met the news of a Democratic-controlled Senate with a mix of elation, regret, and tempered anticipation.

Ossoff defeated former Sen. David A. Perdue Jr. (R-Ga.) by 1.2 points, while Warnock defeated Sen. Kelly L. Loeffler (R-Ga.) by about two points. With these victories, Democrats will hold a narrow majority in the Senate, with Vice President-elect Kamala D. Harris as the tiebreaker in the 50-50 split.

Several Harvard students spent the day celebrating the Senate results, with many in states of disbelief. Anna L. Duffy ’21, who worked as a Democratic field organizer in Georgia, said she spent the runoff day celebrating on a call with other campaigners for the Georgia Democrats.

M. Kate H. Travis ’22, who worked as a field organizer for several Democratic candidates in 2020, said she was “shocked and ecstatic” at the results.

J. Alexander White III ’23, who served as a delegate for Virginia in the 2020 Democratic National Convention, said his peers were “excited and cautiously optimistic across the board” about the results.

“I rode to work that day listening to ‘Georgia on my Mind’ by Ray Charles,” he added.

Kimani E. Panthier ’24 said he thought the Democrats had a “pretty solid chance” of taking the Senate back in November when no candidate reached the 50 percent threshold required for an outright win. The day of the runoffs, he said he stayed up until 2 a.m. watching the news all day. Knowing that Warnock will become the first Black man to represent Georgia in the Senate gives him “immense joy,” he said, calling the pathbreaking moment “monumental.”

Though Democrats will control the executive and legislative branches, some students called for renewed bipartisan cooperation. Amen H. Gashaw ’24, vice president of Harvard Undergraduates for Bipartisan Solutions, said leaders should prioritize compassion and cooperation across the aisle.

“We've seen a lot of vilification of the right at large, and I don’t think that a lot of that denigration of conservatism to be fully in good conscience,” Gashaw said. “There’s room for both sides on campus and beyond to just grow in understanding and empathy and do their best to adopt the perspectives of their opponents.”

Kyle A. Englander ’23, president of the Harvard Republican Club, said that he “admittedly was unhappy” with the Georgia results. He said he hopes, however, that both elected officials and Harvard students will “lower the animus,” especially following the riots in Washington, D.C. last week.

“Moving forward, putting a premium on the character of our leaders is going to be really important,” he said. “There is rebuilding that needs to be done.”

Some students said they are doubtful that Congress will pass certain progressive policies they have pushed for, even with both chambers of Congress and the presidency controlled by the Democrats.

“People will have to evaluate whether they believe in the Democrats’ ability to deliver the change that they’ve promised, versus what I predict will be a relative inaction on the part of the Biden administration,” said Benjamin B. Roberts ’23, treasurer for Harvard Young Democratic Socialists of America.

Travis said she is hopeful for meaningful progressive change both in legislation and political culture.

“I’m excited to see a turnback to a respect for democratic norms and people considering progressive policies not just as a thought experiment, but as a real possibility for this country,” Travis said.