No. 22 Football Cruises Past Cornell, 24-10, to Keep Perfect Record Intact 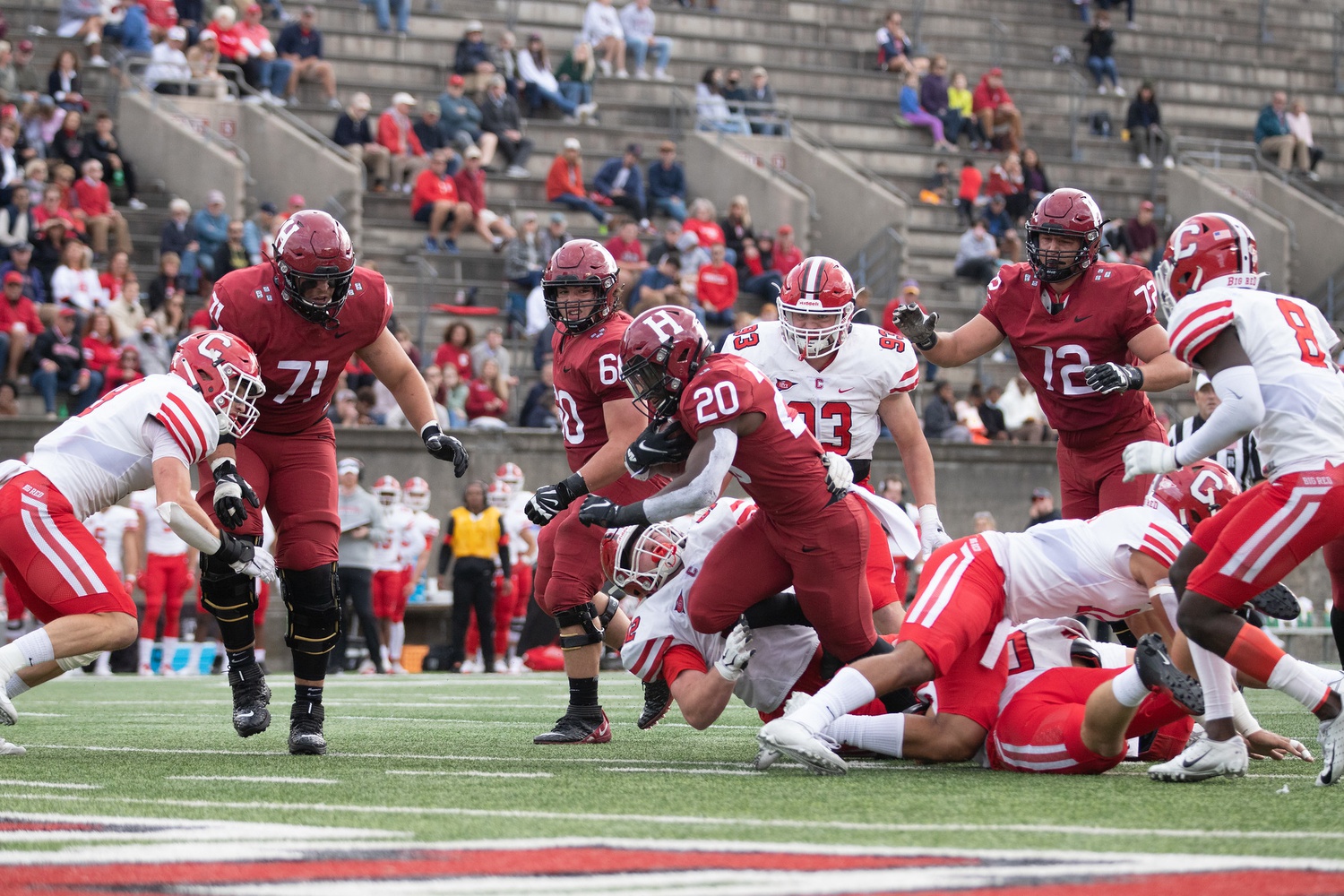 Junior running back Aaron Shampklin bursts through a line of Cornell defenders as he sets his sights on the goal line. By Angela Dela Cruz
By Brahm Erdmann, Contributing Writer

Trailing at halftime for the first time all season, the No. 22 Harvard football team’s perfect record looked like it could be in jeopardy Saturday afternoon against winless Cornell.

That changed just minutes after the Crimson came out of the locker room for the second half.

Harvard exploded for three second half touchdowns to coast past the Big Red, 24-10. The Crimson (4-0, 2-0 Ivy), riding high after being nationally ranked this week for the first time in five years, came alive for 14 points in the third third quarter to overcome a first half deficit and keep its perfect record alive.

“Great team effort today,” Harvard coach Tim Murphy said after the game. “This [Cornell] team always plays us tough, everybody in our league is good, and the reality is, if we can continue to play the type of defense we play, we’re going to be in the hunt. We’re playing at a really high level right now.”

The Crimson went into halftime trailing 7-3 after struggling offensively during a half in which both teams were marred by dropped passes and missed opportunities.

“The game wasn’t over,” said senior linebacker Jordan Hill. “I don’t think anybody was discouraged. We were more motivated than anything, understanding the task at hand.”

“We really saw that as an opportunity to show that we can win in those moments, and that’s exactly what we did,” Hill added.

Harvard rushed for just 35 yards and completed only seven passes through the first two quarters as it struggled to set up the run game that was lethal in its first three victories of the season. The Crimson also turned the ball over three times — the most it has in a half this season.

Harvard coach Tim Murphy pulled quarterback Jake Smith, who threw an interception on the Crimson’s first offensive play of the game, midway through the first quarter. Murphy said after the game that he had hoped not to use Charlie Dean, the Crimon’s normal starting QB, who had been banged up in Harvard’s home opener against Brown on September 24. But he opted to put the sophomore in to give the offense a spark. 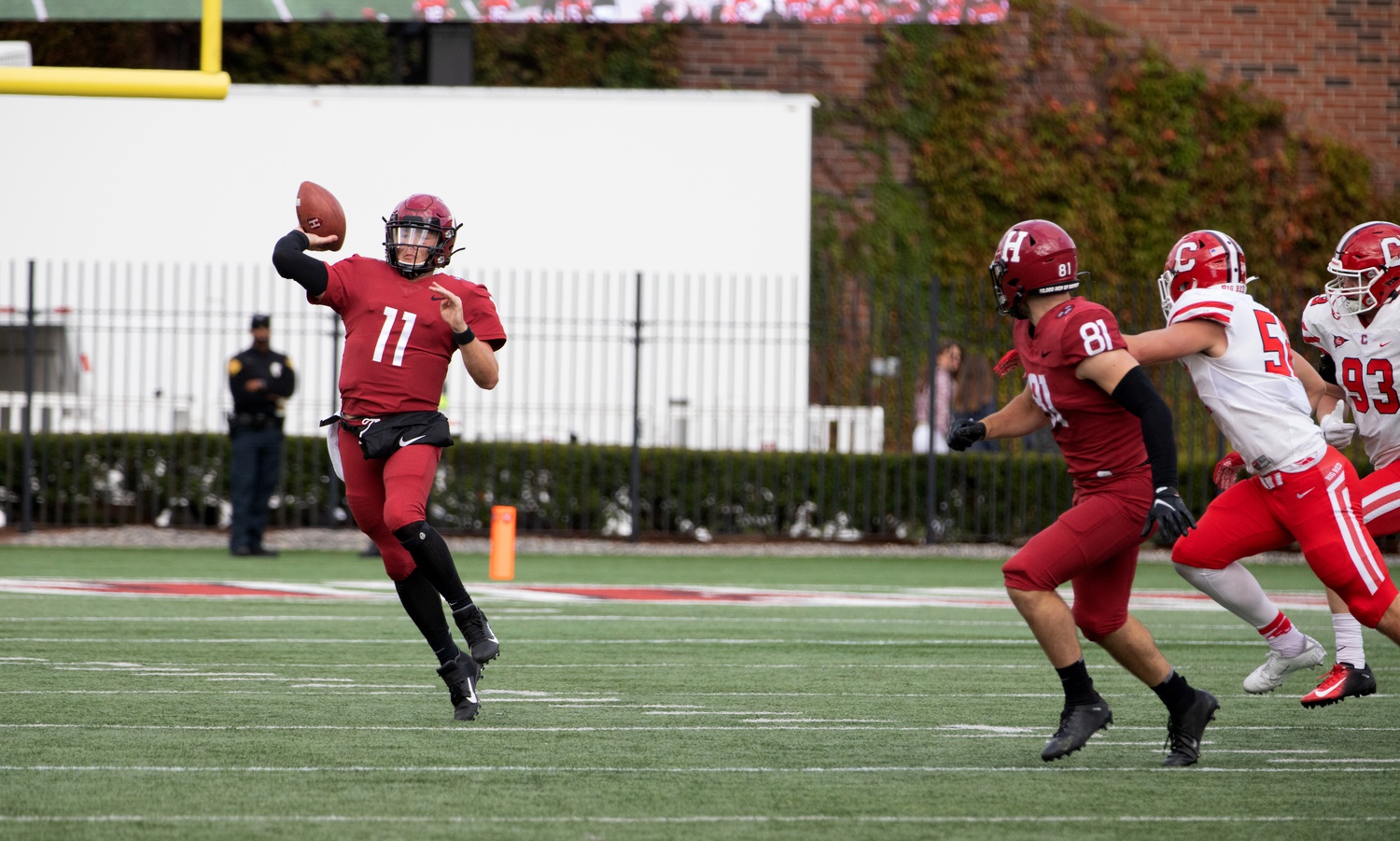 Shortly after coming into the game, Dean connected with first-year receiver Kaedyn Odermann for a 17-yard completion that delivered momentum to the Crimson offense. The pass set Harvard up to get on the board with a field goal after a 19-yard run by sophomore running back Aidan Borguet put the Crimson in the red zone and a diving catch by junior wide receiver Kym Wimberly advanced it to the five yard line. A pair of stuffed runs near the goal line left the Crimson to settle for a field goal for its first points of the game.

Harvard failed to score a touchdown on two separate drives in which it entered the red zone in the first half.

“I don’t think it mattered who the quarterback necessarily was because they did a lot of really great things defending us,” Murphy said.

Harvard’s second trip to the red zone came at the beginning of a chaotic sequence halfway through the second quarter after it blocked a punt deep in the Big Red’s territory. With its offense threatening, a near-interception intended for junior tight end Adam Shepard followed by a four-yard tackle-for-loss set the Crimson back to third-and-long at Cornell’s 24 yard line. Big Red defensive tackle Jack Muench then forced a fumble from Dean, marking Harvard’s second turnover of the half.

An inspired Big Red offense then capitalized with a six-play, 74-yard drive capped off by an easy 24-yard touchdown run by fifth-year running back SK Howard to put the visitors in front going into the locker room at halftime.

But the Crimson came roaring back in the third quarter with touchdowns on its first two drives of the half.

“We knew coming in that they give you every blitz known to man,” Murphy said of Cornell. “We made some adjustments [at halftime] in terms of what formations we felt best [fit] us based upon the blitzes we were getting.”

Bursting out of the gates in the third quarter, Harvard finally put together a touchdown drive on the back of agile running from Aaron Shampklin. Aided by a pair of penalties committed by the Big Red defense, Harvard penetrated the end zone for the first time with a one-yard rush by Shampklin.

Cornell responded quickly, with quarterback Richie Kenney rattling off completions to move the chains for the Big Red, setting up a 33-yard field goal to tie the game back up on the next drive.

The Crimson’s offense, however, was off and running: A screen pass to senior wide receiver B.J. Watson, who took advantage of strong blocking to explode down the Cornell sideline, was taken to the end zone for a 75-yard touchdown that brought a home crowd of 7,414 to its feet.

“It was an 11-man effort,” Watson said of the play. “That’s what it’s all about — everybody being on the same page, all 11 guys coming out, doing their job, and getting it done.” 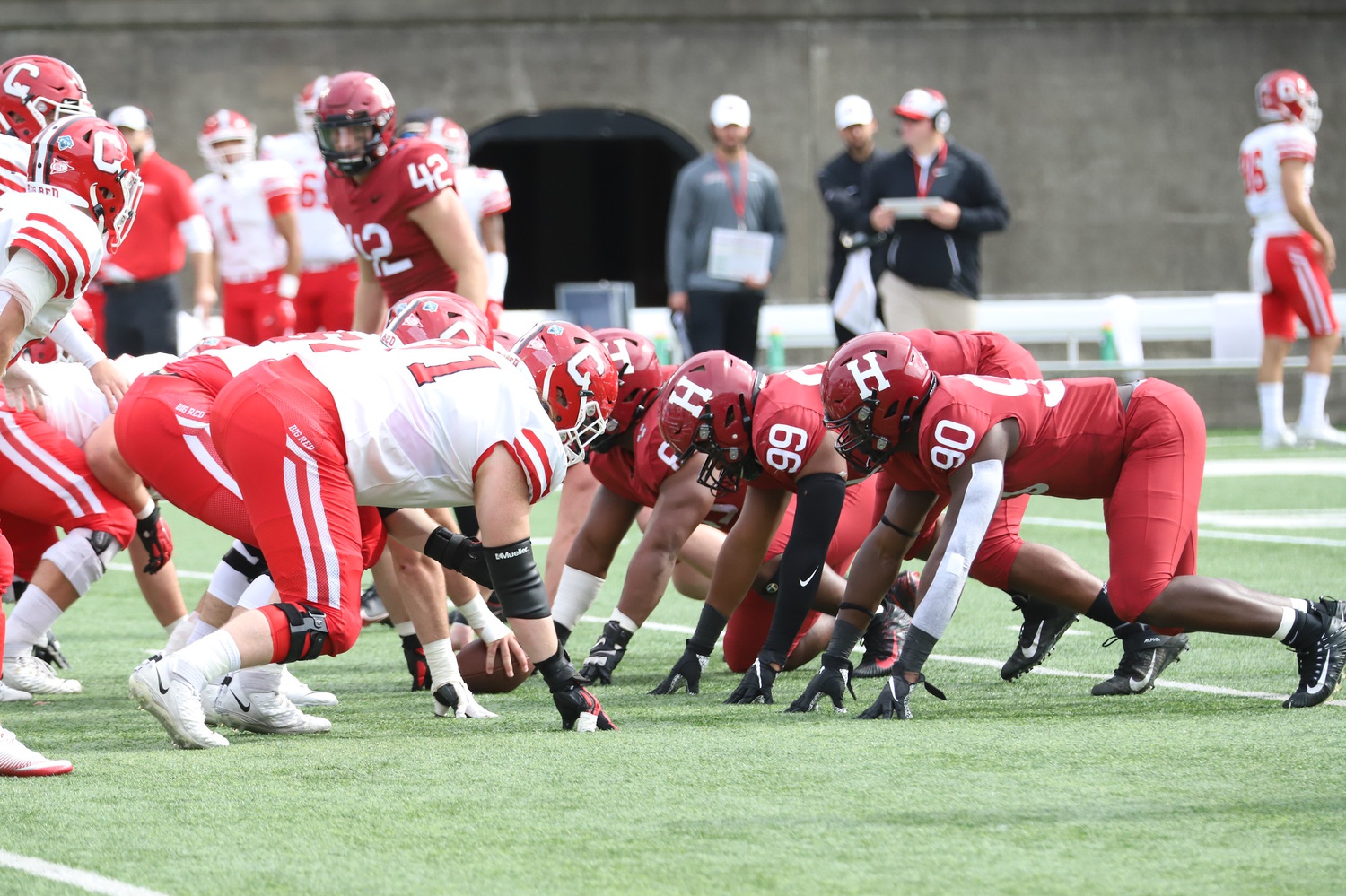 The Harvard defensive line, led by junior Truman Jones, gears up for a confrontation with Big Red offensive line in Saturday's matchup. By Owen A. Berger

Harvard’s front seven began to wear down Cornell’s offense in the fourth quarter with constant quarterback pressure and a strong run defense that prevented the Big Red from getting back in the game.

Cornell’s make-or-break play came down to a fourth-and-16 with just over two minutes of play. Kenney, pressured by Harvard senior captain Jordan Hill, threw a desperate attempt on the run which was broken up by sophomore safety Victor Tademy.

“Love the energy — it really gets us going,” Hill said of the Harvard Stadium crowd Saturday. “But if there was nobody in the stands, we’ve still got to come with the same energy, same effort — and that’s what we do.”

Aaron Shampklin put a nail in the Big Red’s coffin with a 35-yard sideline touchdown run. Shampklin’s dominant two-touchdown performance served as the catalyst for the Crimson’s second half comeback.

“For the second week in a row, we [got] in a tough situation and that’s when we actually played our best football,” Murphy said.

Harvard will host Lafayette next Saturday at 1 p.m. in its final non-conference game of the season.