A Family of Forbes: Siblings Reconnect with Harvard Basketball 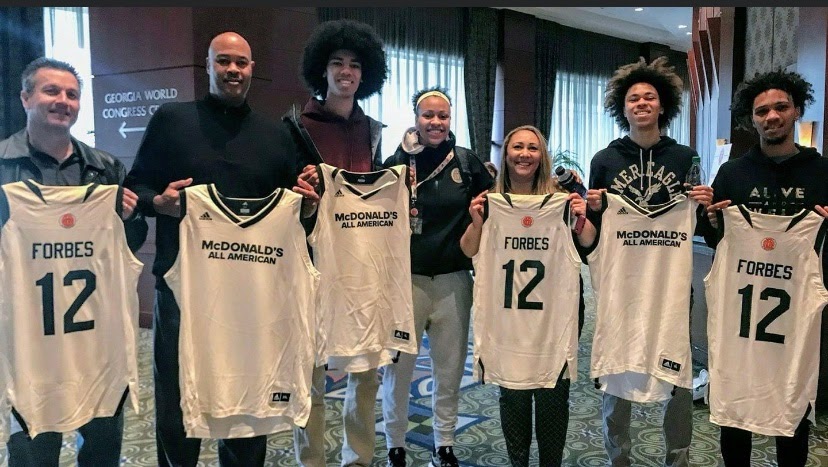 Being admitted to Harvard was a little bit sweeter for the incoming class of 2025. Due to the record-high number of applicants, the College accepted an all-time low 3.43 percent of those students into the school, making this year’s class the most competitive in Harvard history.

As competitive as admission into Harvard was for this year’s incoming class, admission for transfer students is even more selective. The College typically receives around 1,500 transfer applications each year. Of those transfer applications, the school accepts on average 12 students per year — an acceptance rate of less than 1 percent. Becoming a member of this cohort means getting through one of the most rigorous admissions processes in the world.

In 2019, the former University of California, Berkeley guard and current junior McKenzie Forbes earned a spot as one of these select few transfer students, which is not surprising given her success both as an academic and an athlete. The McDonald’s All-American will put her nationally-acclaimed on-court talent to use outside of the classroom as one of the newest members of the Harvard women’s basketball program.

While transfer students face the challenge of adjusting to a new environment, McKenzie had a unique advantage. Lavietes Pavilion houses a very familiar face: her brother Mason Forbes, who is a senior on the men’s basketball team and a standout in his own regard.

The 6’8” forward from Folsom, Calif., was a four-year member of his high school varsity basketball program, a three-year starter, and two-year captain of the squad. Having excelled in his time in Folsom, Mason made the transition to college basketball in 2018 — a year that culminated with Harvard men’s basketball reaching the Ivy League finals for the second straight season.

Mason’s success extends beyond the court as well. In June of this past year, the psychology concentrator with a secondary in economics received the Charles Ogletree Humanitarian Award, which is given to the player "who embodies Harvard Law Professor Charles Ogletree's devotion and commitment to selfless service in the Harvard community and beyond."

Furthermore, after Mason co-founded the Harvard Athletics Black Varsity Association and volunteered with the Neighbor Program, which aids the unhoused population in Sacramento, he was named to the 2021 National Association of Basketball Coaches (NABC) Community Assist Team — an honor only six Division I basketball players received this year.

Despite spending a few years at different academic institutions, the Forbes siblings have always been by each other’s sides. The duo played on the same Amateur Athletic Union (AAU) team growing up until middle school when McKenzie, who was playing in the same age division as Mason despite being a year younger, made the transition to women’s basketball in her own age group.

Being an elite athlete requires a certain level of competitiveness — a trait that both Forbes siblings have plenty of. Mason and McKenzie also have two older brothers, Marcus and Max, who also played basketball growing up, and this sibling squad fostered competitive spirit in countless two-on-two games over time. 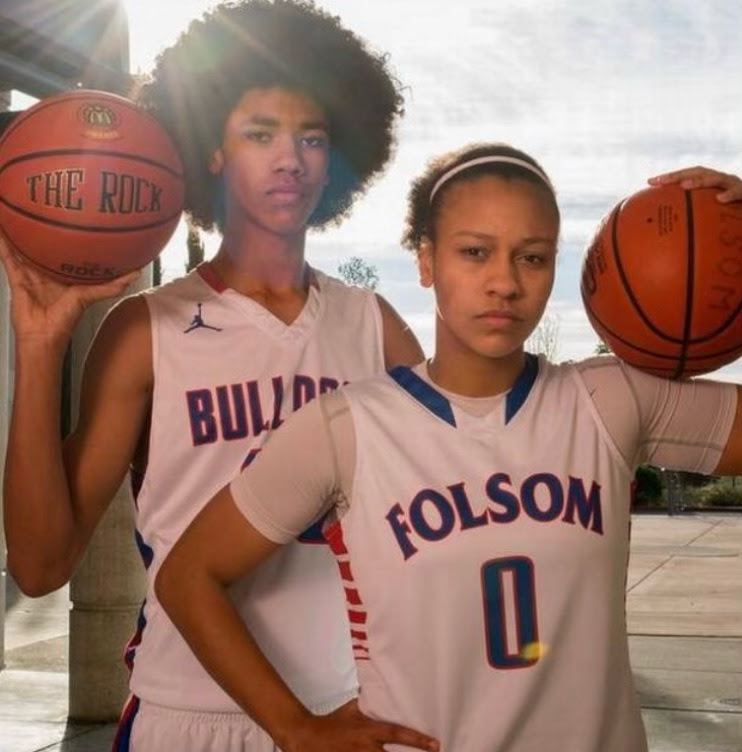 Mason and McKenzie both played for the Folsom Bulldogs in high school. At Harvard, the two will represent the same program for the first time since their Folsom days. By Courtesy of the Forbes Family

“We were always very competitive,” said McKenzie of her relationship with her brothers. “All three of my brothers got me a lot better just because they weren’t soft on me.”

Mason and McKenzie’s love for basketball and their closeness in age has provided them with a unique advantage.

“I always have someone to go shoot and train with,” McKenzie said. “Especially throughout our high school years, that was a big part of my development because we held each other accountable.”

Mason has found that his game has grown as well from getting to consistently play with another talented and passionate player throughout his childhood.

“Growing up with a sister who was passionate about basketball has been everything,” Mason said. “Because we’re so close in age, we stepped into the world of basketball around the same time and were able to grow and learn more about the game from each other.”

Both Forbes siblings have been playing basketball since they were able to fit a ball in their hands, and the inspiration to pick one up was not hard to find.

Mason and McKenzie’s grandfather, Sterling Forbes, Sr., was an All-American for Pepperdine University, a draft pick of the Los Angeles Lakers in 1960, and a member of the Harlem Globetrotters for three years afterwards.

The basketball bloodline does not stop there, though. Sterling Forbes, McKenzie and Mason’s father, was a Harlem Globetrotter himself and played collegiately at Texas State University and professionally in Argentina. 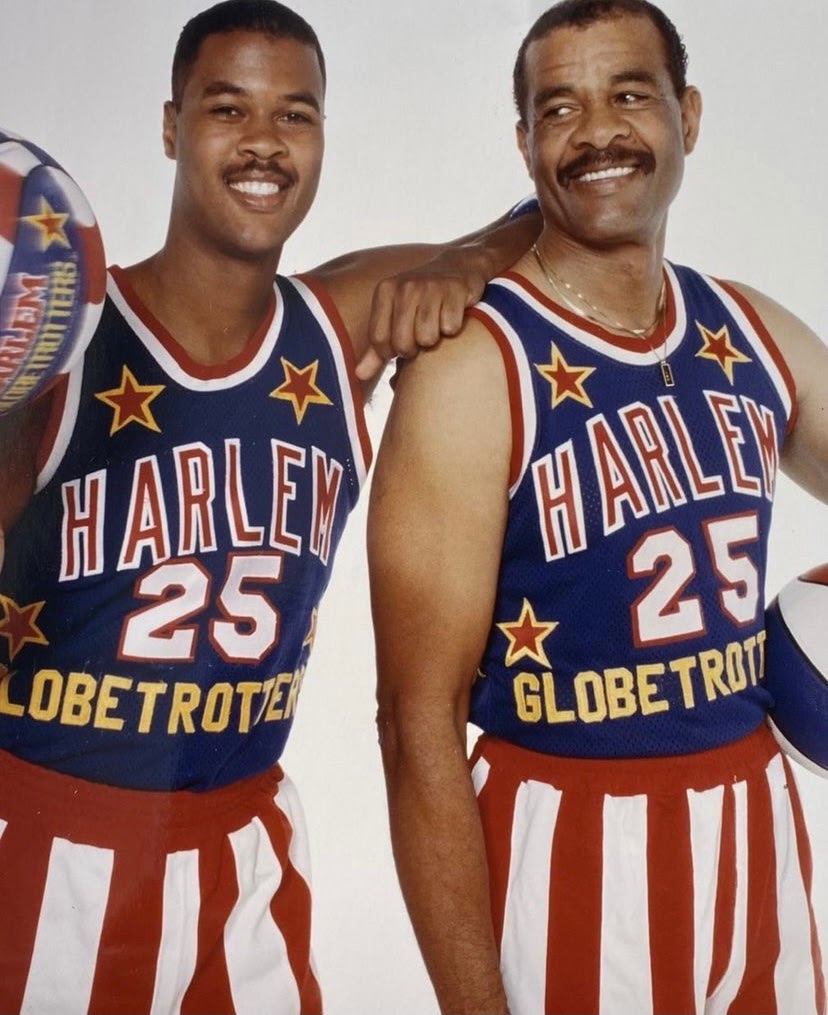 Sterling and Sterling Sr., Mason and McKenzie’s father and grandfather, pose in their Globetrotter uniforms. By Courtesy of the Forbes Family
Advertisement

In the Forbes family, developing standout basketball players is a full-fledged family affair. The mother of the Forbes clan, Sasha, was McKenzie’s first basketball coach.

“I feel like my mom has always been our biggest supporter growing up and was always on top of it as far as getting us to where we need to be while juggling four kids all playing on different teams,” McKenzie said. “I definitely can’t thank her enough for all she’s done to allow me to get to this point.” 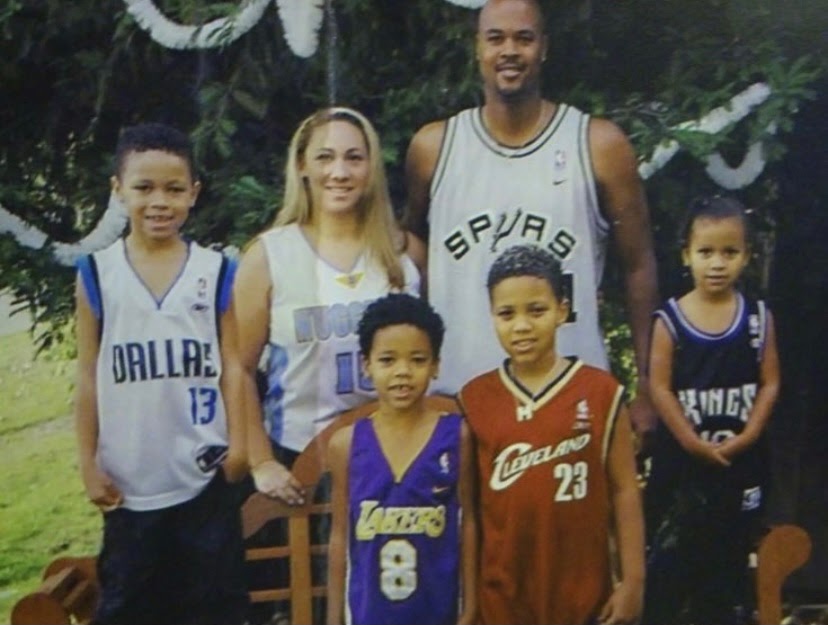 The Forbes family gathers for a photo, with each member wearing a different NBA jersey. By Courtesy of the Forbes Family

With a family full of passion for the game, Mason and McKenzie have created some lifelong memories surrounding the game of basketball. Sterling, the duo’s father, holds basketball camps every summer for kids. Mason and McKenzie fell in love with the game on these courts, spending endless hours on the court before, during, and after their father’s camps.

On their AAU team, Mason and McKenzie even shared the same pregame eating habits. The two used to eat Pixy Stix before games for “energy boosts” as they jokingly recall.

Fast forward a few years, and although the two have deviated from their pregame candy rituals together, they remain by each other’s side.

Physically being by each other’s side and playing collegiate basketball in the same gym, however, was once a long shot for the Forbes siblings. After high school, Mason moved to the other side of the country to play basketball for the Crimson while McKenzie chose to stay in California to play at The University of California, Berkeley. Although the two stayed close during this time, their locations in the country certainly were not.

“Mason was a large part of me considering coming over here,” McKenzie said. “I had come to visit him a couple times, and I just really enjoyed the campus and the people.”

Besides Mason’s role in McKenzie’s decision, McKenzie being able to accomplish her basketball goals was an important determining factor as well. A persuasive argument was made on the court by the Crimson women’s basketball team on Dec. 30, 2018.

Harvard faced off against the 14th-ranked team in the country — none other than The University of California, Berkeley — bolstered by an army of talented players including McKenzie. The Crimson managed to pull off the upset despite McKenzie putting up a career-high 22 points and shooting 75 percent from the floor in the game for the Golden Bears. 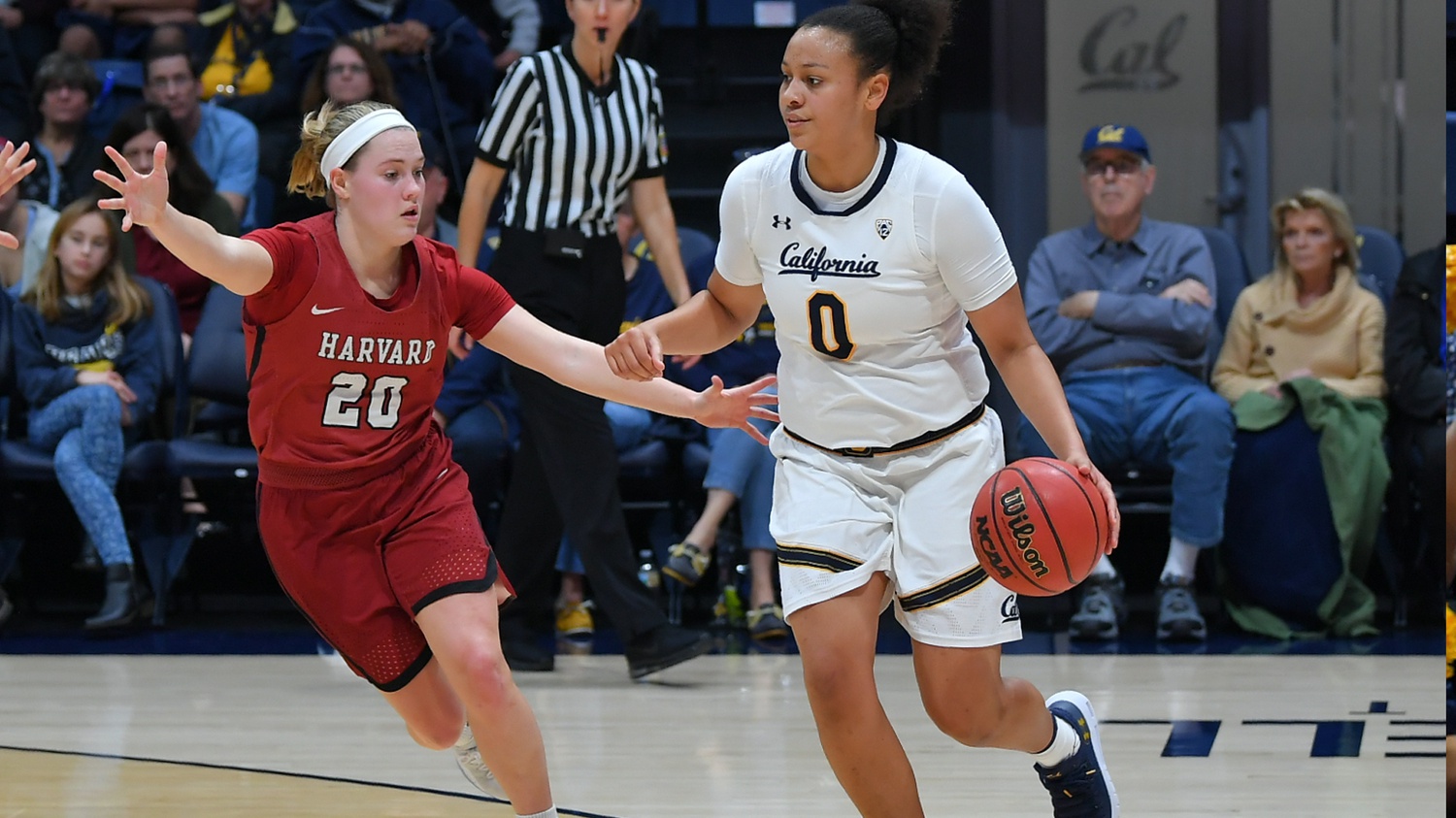 McKenzie Forbes, while playing for the Cal Golden Bears, dribbles at the top of the key as Havard’s Madeline Raster defends. By Courtesy of Cal Athletics

“It definitely played a big role in me coming here as far as me saying, ‘Ok, that is a level of basketball where I can still showcase my talent and get to where I want to go as far as playing after college,’” said McKenzie of the Crimson women’s basketball program’s defeat of Cal.

Nonetheless, making the decision to come to Harvard and adjusting to life here are two very different things. Boston and California winters do not have a lot in common, but thankfully McKenzie has Mason to help her transition to being successful at Harvard.

Terms like “the Berg,” “blocking group,” “concentration,” “the Yard,” and “‘Noch’s,” along with a wide array of other Harvard-isms, take a while for any new student to master. But, Mckenzie’s learning curve has been smoother thanks to Mason’s help.

If McKenzie has any questions when Mason is not around, though, she does not have to look far. Mason, along with the rest of the men’s basketball senior class, took McKenzie under their wing, and she now lives with all of them in Lowell House. 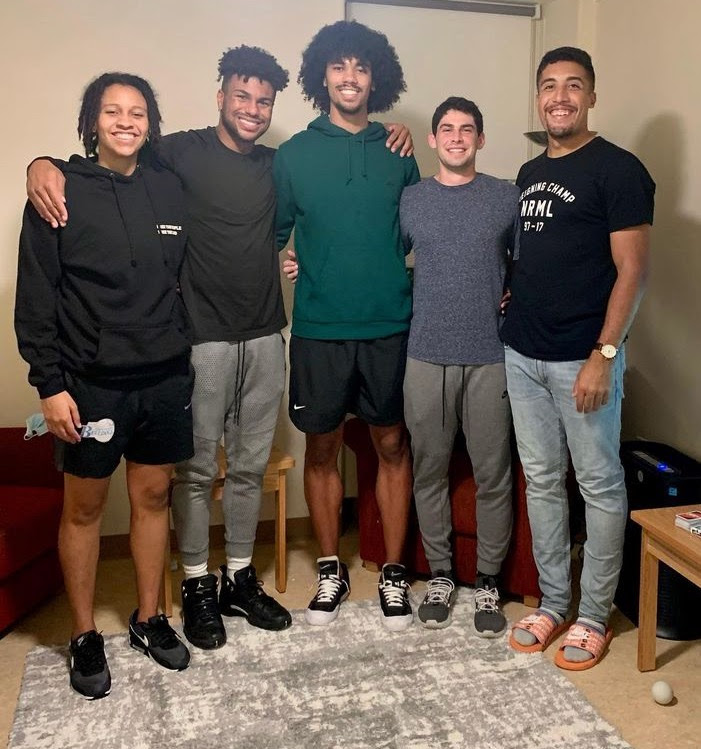 McKenzie lives in Lowell House with the men’s basketball senior class. By Courtesy of Mason and McKenzie Forbes

“She’s already making Harvard her own,” Mason said of his sister. “I think my work is just about done.” 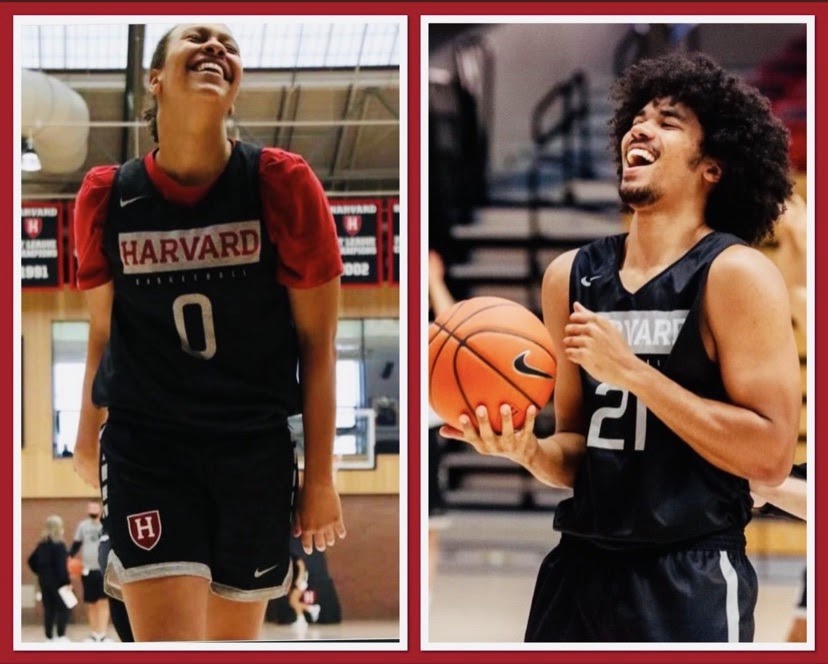 McKenzie and Mason in Harvard jerseys. The two will both suit up for the Crimson simultaneously for the first and only time this season. By Courtesy of Sterling Forbes

McKenzie and Mason will both open their 2021-22 campaigns on Nov. 9 at 7 p.m., with McKenzie making her debut on the road at Boston College and Mason starting off at home against Morehouse College.