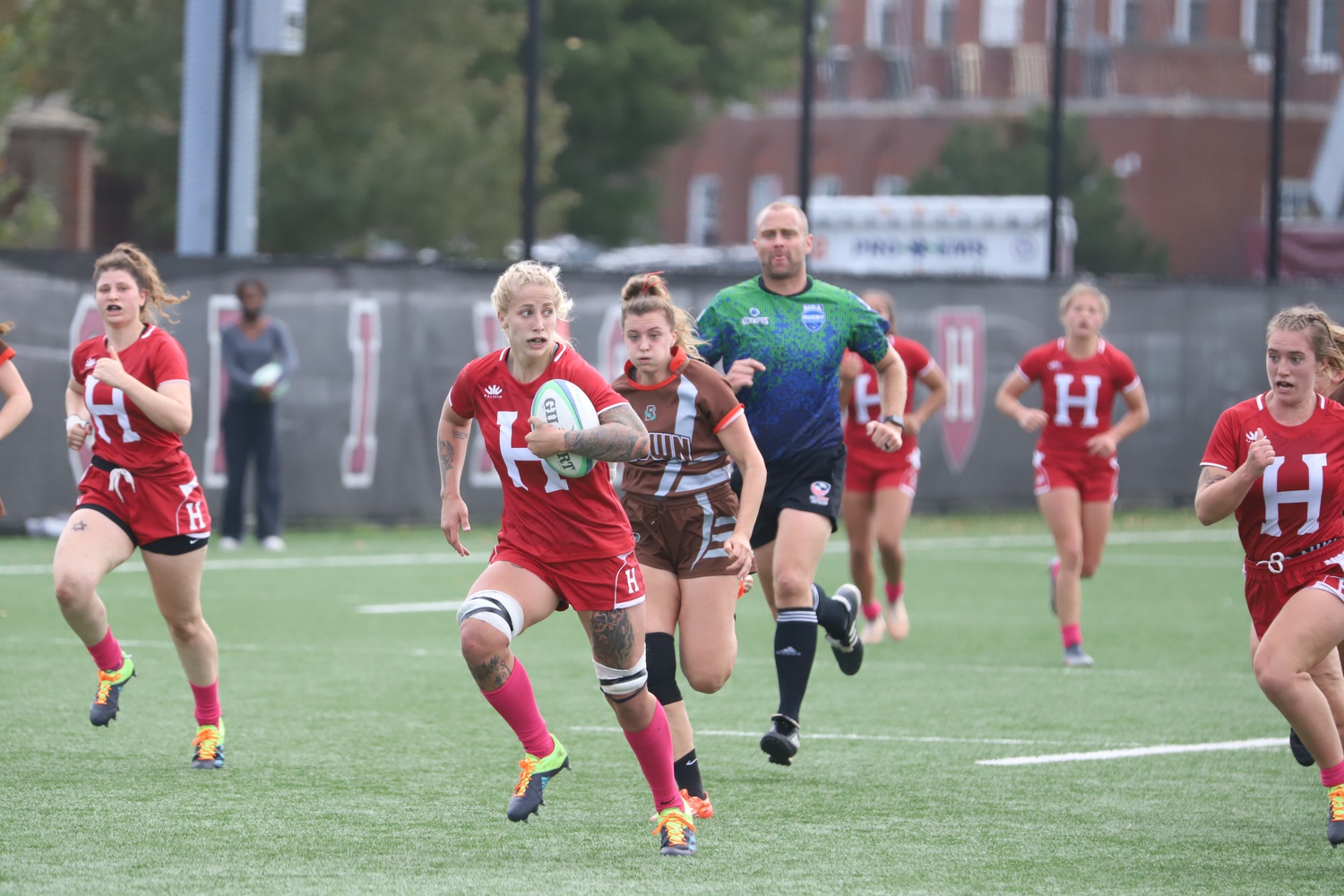 Senior prop/lock Erica Jarrell sprints away from defenders during Harvard's win over Brown. Jarrell's Crimson remains undefeated on the season. By Owen A. Berger
By Lucy Connor and Elizabeth Pachus, Crimson Staff Writers

In its Ivy League opener, the Harvard Women’s Rugby team (5-0, 1-0 Ivy) showcased its dominance with a 60-8 win over Brown. Performing on Mignone field in front of its large and loyal fan base, the Crimson rallied against a tough and physical opponent for yet another impressive win.

Senior wing Sabrina Kim was ready to rumble off the starting whistle, quickly notching two tries for the team.

“Brown has shown throughout this fall that it is a tough competitor. The team definitely has a lot of skilled players… We can never underestimate Brown,”Kim said. “So I came into the match from the first minute really fired up and wanting to bring everyone else's energy up, too.”

Kim successfully sent this sentiment throughout her teammates. First-year center and fullback PK Vincze pointed to Kim’s immediate tries as a mode of calming the team’s nerves, while also proving that their team is ready to compete.

“I think after that everybody kind of calmed down and thought ‘Let’s keep coming out strong,” said Vincze of Kim’s second try. “That was definitely a big moment for all of us. It’s really great for her to step up and do that.”

Combating a slew of injuries requiring many players to adapt to new positions, the team used this game to build confidence in its depth and versatility. Kim noted that increased communication among her teammates was vital to Harvard’s success in these adjustments.

“We were really focused on keeping the communication high and telling people where we wanted them to be and how we wanted them to play. So we were constantly talking and connecting throughout the game,”Kim said. “A lot of players had to step up this week and fill some big shoes, but I think that we actually played super well as a unit. It didn't really matter at the end of the day that we didn't have some of our regular starters.”

Vincze especially adjusted quickly and successfully to the changes in the lineup and her position as she led the team in scoring with her four tries. Other notable performances included first-year fullback Chloe Headland, who tallied 13 points for Harvard, and sophomore wing Maeve Humphrey, who scored her first try of the season. The noteworthy, enthusiastic reaction by the Crimson’s bench to Humphrey’s try highlighted the team’s positive and supportive atmosphere on the day.

After heading into halftime up 34-5, the locker room mentality centered around driving the energy all the way through to the final whistle. Having anticipated the challenge and physicality of the game, Harvard was eager to maintain its scoring drive in the final 40 minutes.

“[We wanted to] keep up the intensity and pressure we had and play a smart game,”Vincze recalled. “We talked about just continuing to play the way we had been from the beginning and keeping the momentum we had in the first half throughout the rest of the game.”

Vincze took that to heart, needing only the first five minutes of the second half to score two back-to-back tries, elevating Harvard to a 48-5 lead over the Bears.

Looking ahead, the Crimson have a bye week to rest and recover before facing one of its toughest opponents this season, Dartmouth. Nonetheless, Harvard is ready for the challenge, determined to continue to fine-tune the depth and intensity the team displayed in this most recent competition.

“Leading into probably our most competitive match of the season so far against Dartmouth, we're definitely going to remain clinical in how we prepare for the game,”Kim noted. “Whether that's watching film, or getting extra reps in, or having meetings with other players and figuring out what our work needs to be — that’s what we’re going to be doing.”