Preview: ‘In Command Where You Belong,' No. 19/RV Harvard Rides Dominant Defense Into Matchup Against Lafayette 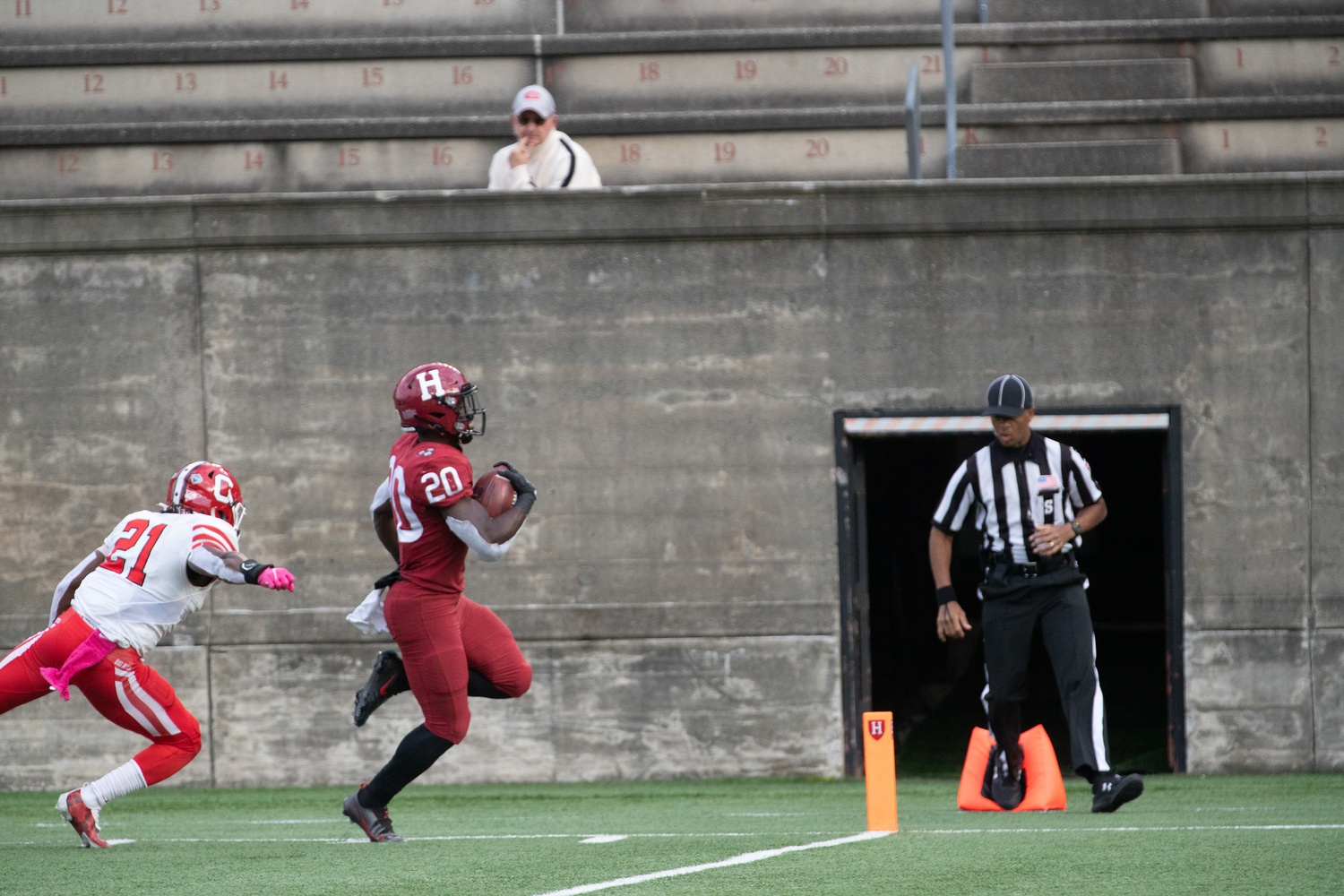 Junior running back Aaron Shampklin races past a Cornell defender for the touchdown in last Saturday’s 24-10 victory. Shampklin finished the contest with two scores and 92 yards on 18 carries, adding to his impressive season as the Crimson’s workhorse from the backfield. By Angela Dela Cruz
By Griffin Wong, Crimson Staff Writer

If the lion is the king of the jungle, the leopard may be its secret service. Although the most commonly-cited estimates indicate that more than 700,000 leopards still roam the wild, they tend to be solitary creatures, often hiding in the canopies of trees on the savannah. For adventure-seeking tourists who travel to Eastern and Southern Africa, leopard sightings have proven elusive. On Saturday, though, the Leopards will face an even more elusive opponent, when Lafayette (2-4, 1-1 Patriot League) travels to face No. 19/RV Harvard (4-0, 2-0 Ivy) and its prolific rushing attack.

Despite two relatively slow rushing games dropping it from the second-highest average in the Football Championship Series (FCS) entering the Oct. 2 matchup against Holy Cross to 15th prior to the Lafayette game, the Crimson offense has still managed to rack up an average of 209 rushing yards per game. The attack is led by junior Aaron Shampklin, who currently holds top-ten marks nationally in rushing yards per game (4th; 117.0) and yards per carry (5th; 7.2), and his six touchdowns on the ground — in just four games —are good enough for twelfth. His exploits are complemented by solid seasons from sophomore Aidan Borguet, the 2019 Ivy League Rookie of the Year, and sophomore Sone Ntoh, who found the end zone twice against Brown.

“I believe that we have one of the best backfields in the country,” junior safety James Herring wrote in an email to The Crimson. “[Shampklin], [Borguet], and [Ntoh] are all very talented backs that keep us on our toes at practice. By practicing against the best every day, we as a unit are ready each week for anything thrown at us.”

In its last game against Cornell on Oct. 9, Harvard fell into an early 7-3 hole, entering the halftime break in a deficit for the first time in 2021. Instead of panicking, the Crimson picked up the energy in the second half and took advantage of the opportunities they had squandered in the first half, pulling away in the third quarter to secure a 24-10 victory and extend its unblemished record to 4-0. Herring credited his team’s resilience to both head coach Tim Murphy and senior linebacker Jordan Hill, who is serving as the 147th captain of Harvard football this season.

“[Murphy] always says the right thing and did a good job rallying us for a second half comeback, but I’d like to emphasize [Hill]’s impact. When he speaks, everyone listens. He is a true leader of men and everyone on the team unites behind him,” he wrote.

Now ranked 19th in the FCS Coaches’ Poll, Harvard is off to its best start since 2016, which also marked the last time it held a national ranking (No. 15). If it is able to defeat the Leopards at 1 p.m. at Harvard Stadium and move to 5-0, it will match a feat it has not pulled off since the Ivy League-winning 2015 team won its first eight games. A victory would also mark its 18th win in 21 all-time matchups against Lafayette and its seventh in a row.

The Leopards enter the game with some momentum after cruising to a 27-0 victory over Bucknell on Oct. 9, its first shutout since 2017. Overall, they have won two out of their last three games, with the exception being a 42-41 loss to Fordham. Their defense held the Bison to just 169 total yards, and they managed to sack quarterback Nick Semptimphelter four times. Linebacker Marco Olivas compiled 16 tackles, and he is tied for eighth nationally in total tackles (62).

In addition to Olivas, Lafayette boasts defensive lineman Malik Hamm, an All-Patriot League First Team selection in Spring 2021, as well as Damon Washington and DaRon Gilbert, who earned Second Team nods. The Leopards’ defensive prowess has allowed them to boast the 14th-stingiest passing defense in the nation (170.7 yards per game), the best Harvard has faced so far this season.

If it is to top that number, the Crimson will rely on sophomore quarterback Charlie Dean, who came on in relief of senior quarterback Jake Smith against Cornell. Dean, who started each of the first two games of the season before being hobbled by an injury, outperformed the upperclassman, completing 12 of his 21 passes for 204 yards and a 75-yard touchdown pass to senior wide receiver B.J. Watson. Watson’s score tied for the 16th-longest in school history.

Watson is joined in a deep wide receiver corps by junior Kym Wimberly and first-year Kaedyn Odermann, who earned Ivy League Rookie of the Week honors after his performance against Holy Cross. Crimson fans can also expect heavy doses of Shampklin and Borguet; despite Lafayette’s performance against Bucknell, it still ranks as just the 60th best rushing defense in the FCS, allowing 149 yards per game.

Meanwhile, Harvard’s defense will face a fresh challenge. The new-look Leopards offense is led by a true freshman, quarterback Ah-Shaun Davis, the only first-year signal-caller the Crimson has faced so far. In the 2021 season, he has shown very few signs of inexperience, completing 67.8 percent of his passes for 825 yards, three touchdowns, and an interception, including a 354-yard performance in the loss to Fordham. Herring noted that while Davis posed a formidable threat, he hoped that his stifling defense would induce some rookie mistakes.

“I am impressed with [Davis],” he wrote. “The kid has an incredible arm and shows poise for his young age. However, there is a savviness that comes with experience. We expect [Davis] to air the ball out and when that happens mistakes will inevitably happen. Our goal is to capitalize on those mistakes.”

For Davis and the Leopards to find much success against Harvard, they will have to present a multifaceted offense. Like Cornell, Lafayette prefers to run the ball, despite Davis’ arm strength. Against Bucknell, three ball-carriers made a significant impact on the game, with running backs Selwyn Simpson and Michael Hayes and wide receiver Joe Gillette each rushing for more than fifty yards and a touchdown. All in all, Lafayette turned its 38 carries into 194 yards (5.1 yards per carry). When Davis takes to the air, his top targets are Gillette, wide receiver Julius Young, and tight end Mason Gilbert.

On the other hand, Harvard believes it is well-equipped to handle the Leopards’ attack. Herring has led the Crimson in tackles in each of the past two games, racking up 12 against Holy Cross and matching senior linebacker Andrew Irwin with nine against Cornell. In addition to Herring, Harvard boasts a strong front seven that ranks fourth nationally, conceding just 63 yards per game on the ground so far in 2021.

Herring’s secondary is stingy against the pass as well, ranking sixth in the country in team passing efficiency defense (101.3). Senior cornerback Khalid Thomas and sophomore cornerback Khalil Dawsey have each intercepted two passes in three games this season, tying for fifth in the FCS with 0.7 picks per contest. Junior defensive lineman Chris Smith also shares fifth nationally with 0.5 forced fumbles per game.

“Our coaches create a great scheme each week and all we have to do is execute. Also, our front seven makes life easy for a third-line player. The [defensive line] has dominated this season and our [linebackers] play sound, physical football,” Herring wrote.

The Lafayette game marks the last non-conference matchup Harvard will play this season. It enters the bulk of the Ivy League regular season tied for first with Dartmouth, but both the Big Green and No. 20/25 Princeton are undefeated as well. On Oct. 23, the Crimson will travel to Princeton, N.J., to face off against the Tigers, and, the week after that, Dartmouth will enter Harvard Stadium seeking its third straight victory in the series. As his team continues its quest for its 18th Ivy League championship, Herring admitted that he has been looking forward to the second half of the season.

“We always focus on the opponent in front of us, but I would be lying to say that we have not paid attention to our rivals,” he wrote. “Princeton, Yale, and Dartmouth are always formidable opponents, and we look forward to playing them in the coming weeks.”

The Lafayette game can be streamed live on ESPN+ and covered on the radio by Bloomberg WRCA (1330 AM/106.1 FM).