No. 19/RV Harvard Football Cruises Over Lafayette in Last Tuneup before Ivy League Showdown against Undefeated No. 20/25 Princeton 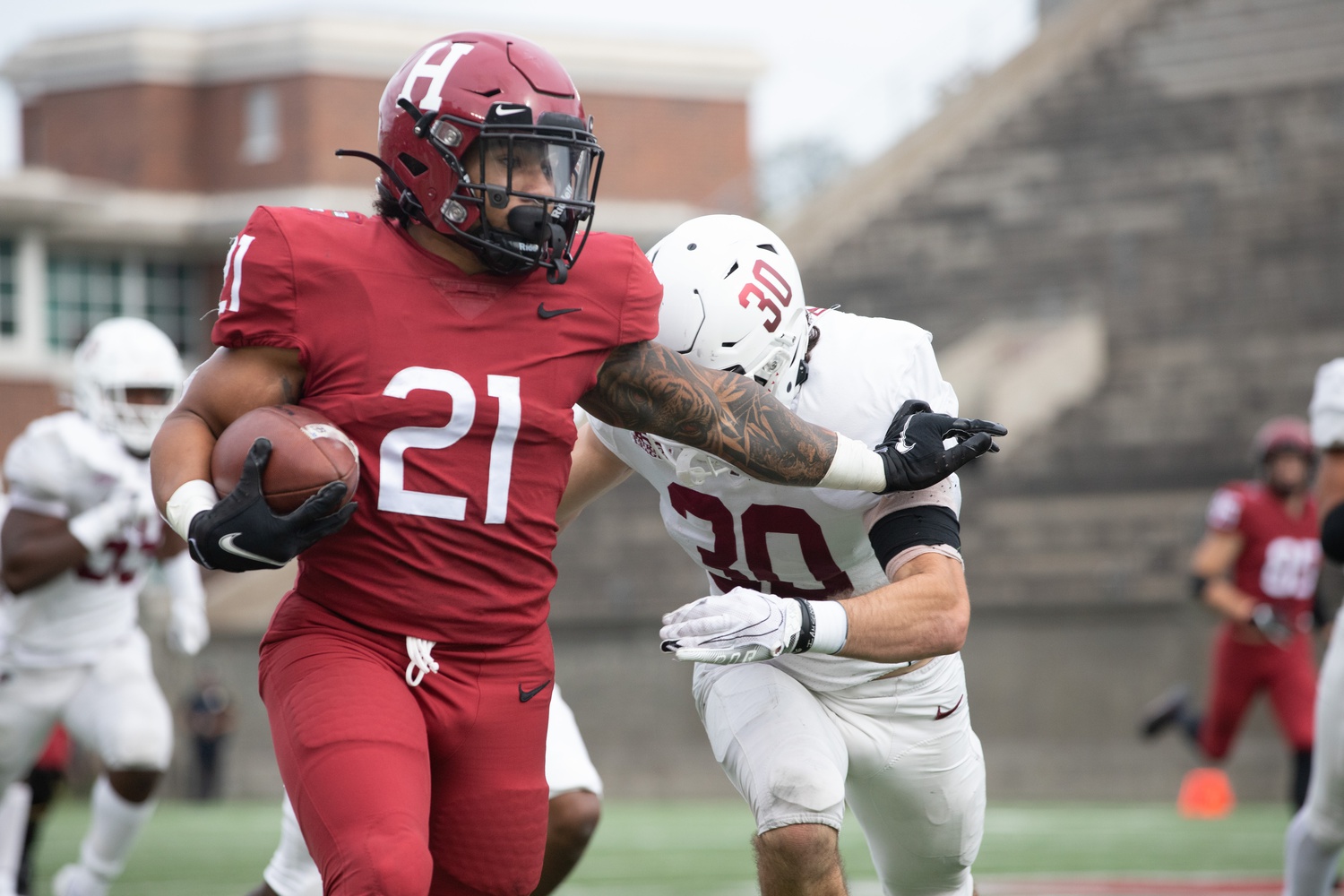 In its last non-conference matchup of the season, No. 19/RV Harvard (5-0, 2-0 Ivy) raced out to an early lead and never looked back, cruising to a 30-3 victory against Lafayette (2-5, 1-1 Patriot League). Missing a pillar of its sixth-ranked rushing attack after holding junior running back Aaron Shampklin out of the game as a precaution, the Crimson did not miss a beat, torching the Lafayette defense to the tune of 229 yards. Sophomore running back Aidan Borguet, the 2019 Ivy League Rookie of the Year, was thrust into the leading role and was more than capable of filling Shampklin’s shoes. All throughout the afternoon, Leopards defenders tried to track him down, to no success. He earned 169 yards on the ground and found the end zone twice before being pulled from the game in the fourth quarter.

On a day when the temperature at Harvard Stadium reached 73 degrees Fahrenheit at kickoff, 11 degrees warmer than the October average in Cambridge, the Crimson offense started off hot. Borguet took the opening handoff to the left and made a cut to the sideline, outracing everybody before he finally was chased out of bounds at the Leopards’ 33-yard line. The 44-yard run was Harvard’s longest first play from scrimmage this season and set the tone for the rest of the drive. Four plays later, Borguet kept it himself from the two-yard line, extending his right arm towards the goal line as he was being brought down. The nose of the football barely crossed the plane and, after a review, the score was upheld, giving Harvard a 7-0 advantage just one minute and 50 seconds into the game.

The Crimson defense then stifled Lafayette on two consecutive possessions. On the Leopards’ first offensive possession, Harvard held them to just two yards in a three-and-out. The Crimson defense has yet to allow a score on an opponent’s first drive so far in 2021. Then, after sophomore running back Sone Ntoh was stuffed in the backfield on 3rd and 1 to set up a punt, defensive coordinator Scott Larkee’s unit stepped up again.

Driving after completing a 15-yard pass to wide receiver Joe Gillette, Lafayette quarterback Ah-Shaun Davis tried to take a third-down shot towards the short right corner of the end zone but was unable to find Gillette. Facing 4th and 6 from Harvard’s 35-yard line, head coach John Garrett sent his offense back on the field instead of settling for a 52-yard field goal try by reigning Patriot League Special Teams Player of the Week punter/kicker Micah Pettit.

Entering the contest, the Crimson defense had yet to cede a fresh set of chains on fourth downs this season, and it would again make Garrett pay for his aggressive play-calling. Davis’ pass down the left sideline, intended for wide receiver Jordan Hull, hit the ground after a strong defensive effort by senior cornerback Khalid Thomas, handing possession back to Harvard and extending the Crimson’s unblemished fourth-down defensive rate to 13/13. Senior linebacker Jordan Hill, Harvard’s 147th football captain, said he was surprised by the play call.

“I don’t know why they would have lined up again, but they make their own decisions,” Hill said with a smile. “In terms of our success, that just goes to everything that we do each and every day. We are all putting in effort, plus some, whether that’s getting on the film, staying after practice to do little things just to find a way to get better. It all pays itself forward when you step on that field for sixty minutes.”

Harvard tacked on another three points on the ensuing possession. It built off the momentum caused by the fourth-down stop immediately, producing a 23-yard completion over the middle to junior tight end Adam Shepherd to enter Lafayette territory. Facing 2nd and 7 on the Leopards’ 16-yard line, sophomore quarterback Charlie Dean was brought down in the backfield by Lafayette linebacker Billy Shaeffer and lost the football. Fortunately for the Crimson, sophomore offensive lineman Scott Elliot jumped on the loose ball to maintain possession. Although the play resulted in an eight-yard loss, junior kicker Jonah Lipel, who has yet to miss a field goal this season, nailed his try from 38 yards.

Lafayette’s next drive would set the tone for the remainder of the game, with Harvard’s front seven getting into the backfield on seemingly every play for the rest of the afternoon. The Leopards went nowhere, with sophomore defensive lineman David Madzivanyika wrapping up Davis in the backfield on second down and senior defensive lineman Jacob Sykes and first-year defensive tackle Thor Griffith combining for a sack on third down. All in all, the Crimson racked up 11 tackles for a loss and seven sacks in perhaps the most complete defensive performance it has demonstrated this season.

“Firstly, I just attribute it to my teammates,” said Sykes, who compiled 2.5 sacks throughout the game. “We’ve been working hard all season and this summer and have been grinding for this moment. This moment’s really just a culmination of all the work we’ve put in. I’m fortunate to get put in the right situation at the right time and just do what I do well.”

The resulting punt left Harvard with excellent field position at the Lafayette 40, one of four Crimson drives that started in Leopards territory. However, offensive coordinator Mickey Fein’s unit was unable to take advantage of its field position. Borguet’s first-down rush was stopped by linebacker Marco Olivas, who earned Patriot League Defensive Player of the Week honors after a 16-tackle performance on Oct. 9 against Bucknell. Then, Dean’s second-down pass towards the right side into double coverage was intercepted by Lafayette linebacker Preston Forney. This time, the Leopards were able to get on the board after Pettit nailed a 33-yard field goal.

By this point, the teams had begun to adopt very different offensive strategies. On Lafayette’s scoring drive, five of their eight plays ended with a pass attempt. Harvard’s defense had done a brilliant job stopping the run to that point and would continue to do so, allowing just negative-24 net rushing yards throughout the game. Meanwhile, the Crimson kept the ball on the ground on eight of its next eleven plays as its running game continued to find success. On 2nd and goal on the one-yard line, Fein called for a quarterback sneak, but Dean was unable to manage the handoff and fumbled. Borguet, seeing the loose ball in front of him, scooped it up and raced to his left and into the end zone, extending Harvard’s lead to 17-3.

Harvard would tack on one more score before the end of the first half, again aided by its defense. Lafayette managed to drive into Harvard territory after Davis found Gillette and wide receiver Julius Young on consecutive plays to start the drive. However, facing 3rd and 9 at the Crimson 36-yard line, junior linebacker Solomon Egbe managed to get a hand on Davis’s pass, and sophomore cornerback Alex Washington ultimately wound up with the interception. Eight plays later, Lipel converted from 27 yards to give his team a 20-3 lead heading into halftime, the fourth game this season in which it has held an edge after two quarters.

Harvard continued to build off its momentum at the start of the third quarter. Lipel’s kickoff was returned from the four-yard line by Leopards wide receiver Carl Smith. Smith managed to take it to the 29-yard line, but was tackled by junior linebacker Jake Brown and coughed up the football. Junior cornerback David Spitz recovered the fumble, and after a lengthy review, the call on the field stood. Although Lafayette managed to avoid conceding a touchdown after linebacker Jyaire Stevens brought down Dean in the backfield, Lipel hammered home a 42-yard field goal try, tying the longest conversion of his career.

“That’s big in all phases, but when you think about turnovers, you mainly think about defense, so to get those on special teams, that’s just an added benefit that’s not really factored in all the time,” Hill explained. “So to get our offense back on the ball to start the second half, what else could you ask for?”

Davis targeted Gillette on his first three passes of the Leopards’ ensuing possession, completing two for a combined 16 yards to earn a fresh set of downs. But on second down, he found a different set of hands — those of Washington, who bobbled the ball before securing it for his second interception of the game. All in all, Harvard’s defense was able to rattle the first-year quarterback into completing just half of his 36 passes for 182 yards and the two picks. 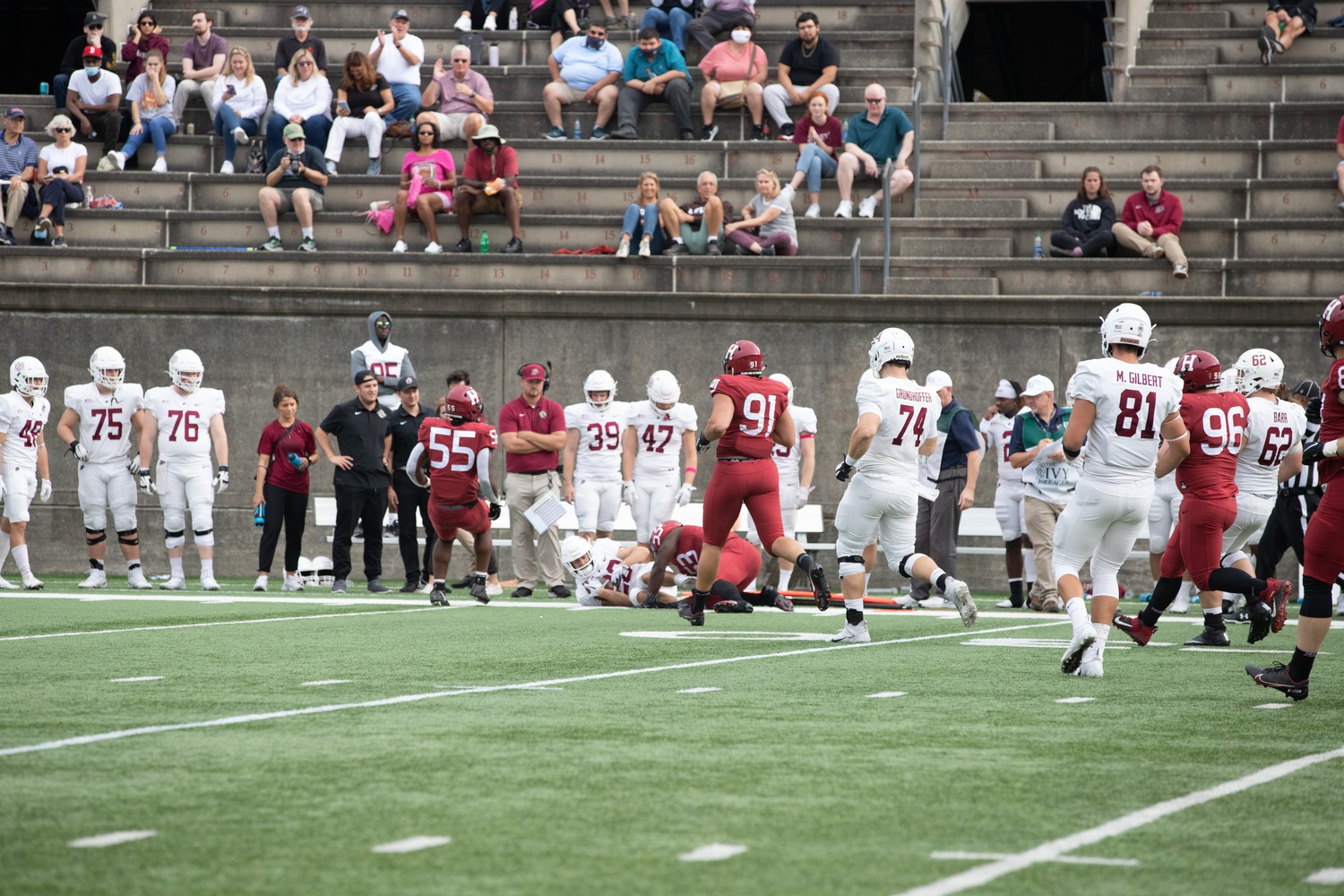 The Crimson offense would take advantage of the turnover, producing a five-play, 43-yard touchdown drive following the interception. Although Borguet did the bulk of the work by taking a screen pass 23 yards down the left sideline, it was Ntoh who found paydirt from nine yards out for his third touchdown run of the season. Lipel, who has missed just one kick this year, converted the extra point to give Harvard its final margin of victory: 30-3.

In the fourth quarter, Lafayette had one more chance to score after driving down to the 20-yard line. However, they were quickly knocked back by the stifling Crimson defense. Sykes broke through the offensive line for two consecutive sacks, each of which resulted in a ten-yard loss, pushing the Leopards out of field goal range. Although Davis completed a nine-yard pass to Gillette on 3rd and 35, Lafayette offered to punt.

It would be Davis’ last play of the game, as Garrett opted to substitute in quarterback Aaron Angelos on the next drive. Throughout the second half, head coach Tim Murphy had gradually pulled his starters with the final result all but secured. However, there was one notable exception: Dean, who played until Harvard’s second-to-last possession.

“It’s obviously very borderline in deciding those things. We just felt we needed to finish with a little positivity with the offense because we struggled a bit in the second half,” Murphy explained. “Charlie played well, but as a unit, when we got up 30-3, we struggled a little bit, so I just wanted to make sure we finished on a high note.”

Although Dean wasn’t asked to do much because of the run game’s success, he managed to complete 15 of his 27 passes for 147 yards and two interceptions. Five different Harvard players had at least 20 receiving yards, including junior wide receiver Tyler Adams, who had returned from an ACL injury and caught two passes in his first action of the season. Alongside junior wide receivers Kym Wimberly and Demarkes Stradford, Adams was able to step up and minimize the absence of first-year wide receiver Kaedyn Odermann, who missed the game with an injury.

“I think we just played well as a unit this game. We weren’t complacent. That’s one thing we’re trying to hone in on as a team, just not being complacent. We’ve had a good start to the season, but [we] just want to keep pushing and keep improving each week,” Hill said.

Next week, Harvard will travel to Princeton, N.J., to face the Princeton Tigers, who defeated Brown on Saturday, 56-42. Princeton, along with Dartmouth and Yale, was one of three teams projected to finish ahead of Harvard in the preseason Ivy League media poll, and it has played up to its potential five weeks into the season. The Tigers are, like the Crimson, nationally ranked at No. 20/25 and undefeated at 5-0. Next Saturday’s game will be crucial in Murphy’s quest to win a tenth Ivy League title.

“We know that we arguably may be playing the best team in the Ivy League next week,” Murphy said. “We’ve got a lot of work to do. We still have room for improvement. We have a lot of respect for Princeton, but we will be ready to play.”