Can The Tiger Earn Its Stripes?: No. 16/RV Football Looks to Stop No. 17/22 Princeton in Battle of Undefeated Teams 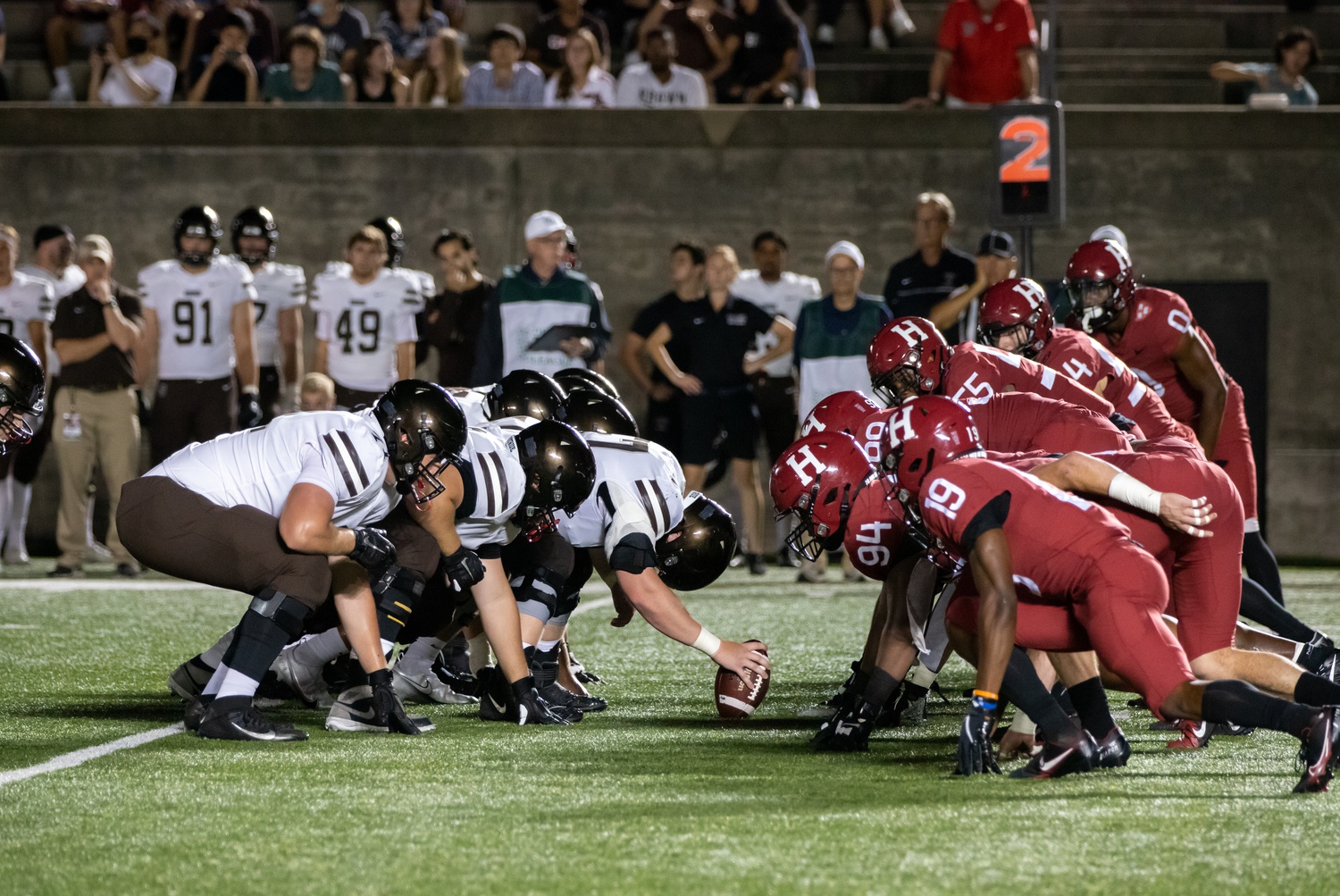 The Harvard defensive line gears up for a snap in the Crimson's 49-17 Ivy League opener win over Brown in September. Line play, whether on defense, offense, or special teams, will likely prove pivotal in Saturday's Harvard-Princeton matchup as both the Tiger and Crimson squads are allowing fewer than 55 yards per game on the ground this season. By Josie W. Chen
By Griffin Wong, Crimson Staff Writer

What happens when an immovable object meets an unstoppable force? No. 16/RV Harvard (5-0, 2-0 Ivy) and No. 17/22 Princeton (5-0, 2-0 Ivy) will answer that question on Saturday at 1 p.m. when they face off at the Tigers’ home stadium in Princeton, N.J. The game, which serves as Princeton’s homecoming, may have massive implications on the ultimate Ivy League championship. Thus far this season, the Crimson and the Tigers have looked like arguably the two best teams in the Ancient Eight. Along with Dartmouth, Eastern Washington, North Dakota State, and Sam Houston, Harvard and Princeton are two of just six remaining undefeated teams in the Football Championship Series (FCS).

The Tigers represent the greatest challenge the Crimson has faced so far this year, and the two teams have notable statistical similarities. Both teams lean on their elite rush defenses. At the midway point of its season, Harvard’s defense has allowed an average of just 45.6 yards per game on the ground, which leads the Football Championship Series (FCS). However, Princeton is not far behind, ranking second with 54.4. Furthermore, both teams tie for second in the nation in sacks per game (4.0). With each school boasting a dominant front seven, the offensive lines will play a crucial role in determining which team will emerge victorious on Saturday.

This season, the Crimson offensive line has protected its quarterbacks effectively, yielding just six sacks in five games, tied for the 23rd stingiest rate in the country and pacing the Ivy League. Meanwhile, it has opened up enough holes for its talented trio of running backs to rack up 213.0 rushing yards per game, which ranks 15th in the FCS. In a 30-3 victory over Lafayette on Oct. 16, sophomore running back Aidan Borguet proved too elusive for the Leopards defense to track down, turning his 22 carries into 169 yards and finding the end zone twice. His performance was augmented by a solid showing from sophomore running back Sone Ntoh, who chipped in 51 yards and a score.

Harvard’s running game earned 229 yards against Lafayette despite missing its most valuable weapon, junior running back Aaron Shampklin. Shampklin, an all-Ivy League First Team selection in 2018, opened his 2021 campaign with 183 yards and two scores against Georgetown on Sept. 18 and has not looked back. This season, his 117.0 yards per game rank fourth in the country, and his 7.2 yards per carry rank fifth. He has also plunged into the end zone six times in four games, good enough for a share of 20th nationally. Head coach Tim Murphy held Shampklin out against the Leopards as an injury precaution.

If Shampklin can play against Princeton, he will face a Tigers defense that opened its season with two shutouts in a 32-0 win against Lehigh on Sept. 18 and a 63-0 trouncing of Stetson on Sept. 25. In those games, they yielded just one net rushing yard. Princeton is led by linebacker Jeremiah Tyler, who paced the team with 11 tackles in its most recent game, a 56-42 victory over Brown on Oct. 16. Tyler was one of two finalists for Ivy League Defensive Player of the Year in 2019 when he was unanimously selected to the All-Ivy League First Team. In addition to Tyler, defensive lineman Uche Ndukwe is enjoying a breakout season, ranking 14th in the FCS with 5.0 sacks. Defensive backs Ken Lim and Michael Ruttlen Jr. share the team lead with an interception apiece.

The Tigers enter the Harvard matchup with plenty of offensive momentum after torching the Brown defense to the tune of 650 yards and eight touchdowns. Running back Collin Eaddy contributed 130 yards on 15 carries and found the end zone four times. After notching three scores against Monmouth on Oct. 9, Eaddy enters the contest tied for fourth in the nation with ten rushing touchdowns this season. Princeton has ranked just 62nd in the FCS with 143.8 rushing yards per game, but it bettered that performance in its most recent game, rushing for 174 against the Bears.

“Yeah, for sure. We’re concerned about [Eaddy],” sophomore defensive lineman Nate Leskovec said. “We’re concerned about every player that we go against every week. We just have to make sure that we have a good, sound plan and attack their offense the right way, and I think we’ll be able to get that done.”

However, despite Eaddy’s brilliance, he might not have been the best player in the Tigers’ victory over Brown. Quarterback Cole Smith completed 25 of his 27 passes for 476 yards, four touchdowns, and no interceptions, including a 51-yard touchdown to wide receiver Dylan Classi. So far this season, Smith has thrown 10 touchdowns to just two interceptions, completing 69.7% of his passes and reaching the 400-yard plateau twice. His aerial efficiency could pose problems for the Crimson defense, which ranks just 65th in the country, allowing 222.8 passing yards per game. Smith has also turned his 42 carries into 62 rushing yards and two additional scores. Still, Leskovec was confident in defensive coordinator Scott Larkee’s game plan.

“Fortunately, we were able to play well against Lafayette, but Princeton’s a whole different type of opponent. We need to have a different plan to attack them,” Leskovec explained. “We’ve got a lot of good guys in our back end, and we’ve been fortunate to play with them. But it’s really just about getting pressure up front and making sure we’re getting to them with everything we can.”

Princeton’s offense boasts three talented wide receivers to complement Eaddy and Smith. Of Smith’s 1,514 passing yards this season, 1,271 have been earned by either Classi, Jacob Bermelin, or Andrei Iosivas. Each member of the trio gained at least 140 yards against the Bears, and Iosivas found the end zone twice, adding to his team-leading five touchdown catches. Bermelin, who leads the team with 528 receiving yards, was an All-Ivy League Second Team selection in 2019.

Although the Tigers present the most high-powered offense the Crimson has faced so far (455.2 total yards per game, ninth best in FCS), the Harvard squad is well-equipped with tools to defend Princeton. In addition to its stellar performance against the run, Harvard’s defense has also fared well against opposing quarterbacks, tying for 27th in the country with its seven interceptions. The impressive turnover haul has helped it rank third in total passing efficiency defense (97.75) despite its mid-pack ranking in passing yards allowed.

After intercepting two passes in the win over Lafayette, sophomore cornerback Alex Washington jumped into a share of the team lead with senior cornerback Khalid Thomas. Thomas is tied for tenth in FCS with 0.5 interceptions per game, and Washington is tied for 30th (0.4). Junior safety James Herring and senior linebacker Jordan Hill, the 147th captain of Harvard football, have each racked up 35 total tackles. Meanwhile, Leskovec leads the team in sacks, sharing 14th in the nation with 5.0. Junior defensive lineman Jacob Sykes has also contributed 4.5 (T-20th). The Crimson defensive line will look to attack a Princeton offensive line that has allowed 15 sacks already this season.

“[We have] really good coaching. We have twelve guys. ... We all do a really good job helping each other. It’s a really supportive system. I just do what I’m told from the coaches, and I get a lot of support from my teammates, and that’s a real blessing,” Leskovec said.

Offensive coordinator Mickey Fein’s unit will be led again by sophomore quarterback Charlie Dean, who threw for 147 yards against Lafayette. Dean’s best performance this season came in relief of senior quarterback Jake Smith in an Oct. 9 win over Cornell, when he completed 12 of his 21 passes for 204 yards and a touchdown, including a 75-yard strike to senior wide receiver BJ Watson. In addition to Watson, Dean’s top target is junior wide receiver Kym Wimberley, who leads the team with 198 yards and two touchdowns. Junior wide receiver Tyler Adams returned from an ACL injury in the Lafayette game to haul in his first two passes of the season and figures to factor in the Princeton game.

If Harvard wins on Saturday afternoon, its 6-0 record would mark its best season-opening stretch since 2015, when it won its first eight games of the season en route to its most recent Ivy League title. The Crimson has won each of its first six games five times this century, going on to win the Ancient Eight in four of those years (2001, 2004, 2014, and 2015). To match this feat and make significant progress towards its 18th conference championship, it will have to win in a stadium where it lost in 2019, against an opponent that has traditionally posed issues: the Tigers hold the overall lead in the series, 57-48-7.

The next two weeks will be crucial for Murphy’s chances of claiming his tenth Ivy League title. Regardless of the result against Princeton, Harvard will have to face RV/No. 25 Dartmouth, which will come to Harvard Stadium on Oct. 30. The Big Green is also 2-0 within the conference, and 5-0 overall, and will face Columbia this Saturday. Regardless of whether or not Dartmouth is able to defeat the Lions, the Oct. 30 matchup will have massive implications on the overall Ivy League championship. However, despite the gauntlet that the team faces, the Crimson is confident that it can step up in the face of the pressure and deliver two crucial victories.

“There’s definitely nerves for every game. The pressure to play the best you can and to not let your teammates down is something that all athletes deal with,” Leskovec admitted. “I think the thing that helps to mitigate the nerves is to really know your job and then know that if you do mess up, you have to get better on the next play, one, and two, that there are good players all over the field that can help you when you’re down.”