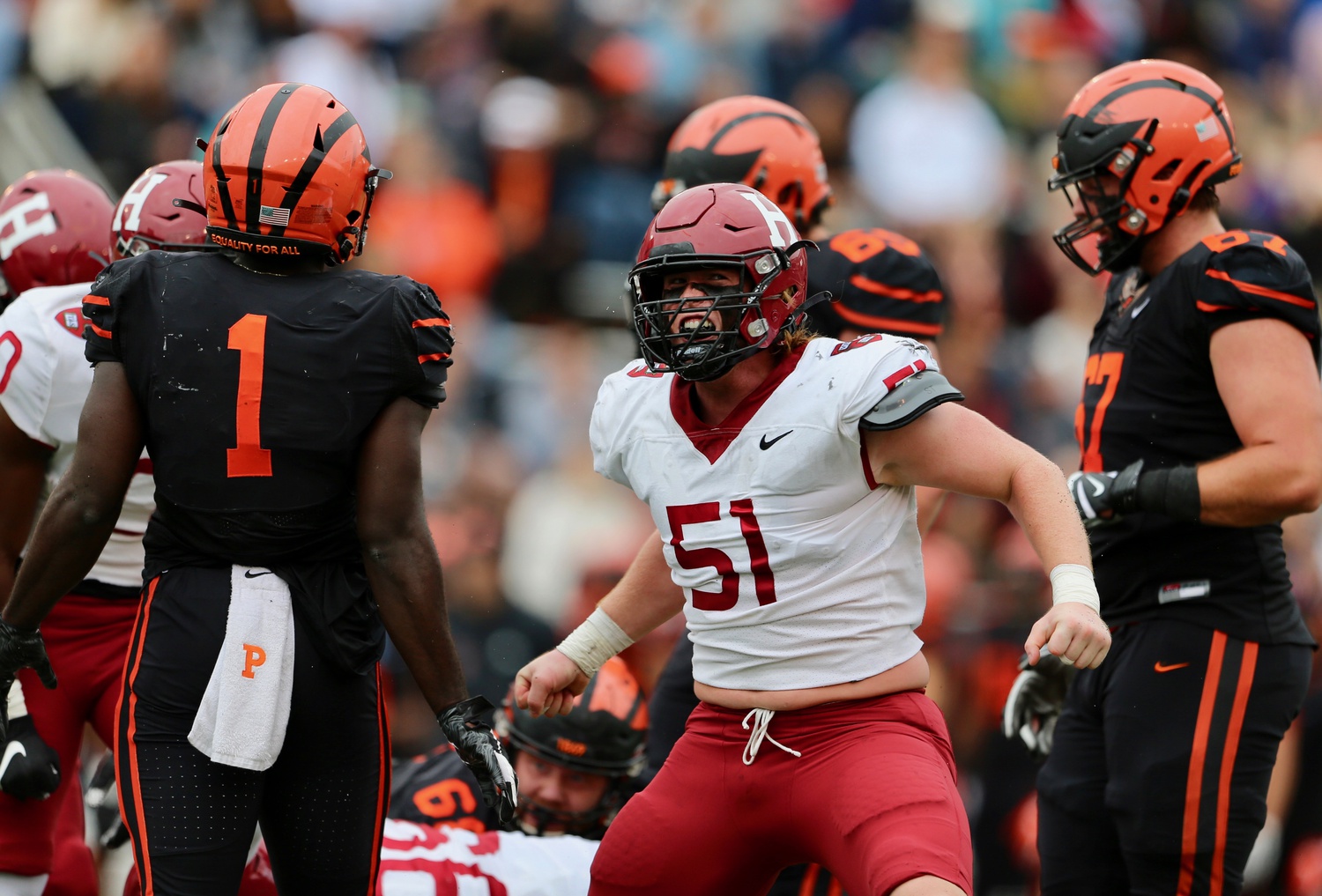 In the third overtime, Harvard had thought it won the game against Princeton with a successful two-point conversion. Upon review, the play was overturned, and the Tigers took home the 18-16 victory in five overtimes. The day after the game, however, the Ivy League acknowledged that "the officiating crew made a procedural error" and that the play in question "should have resulted in a successful two-point conversion." By Courtesy of Scott Greenwald
By Griffin Wong, Crimson Staff Writer

Saturday afternoon was supposed to be about the clash of two football powers at Powers Field in Princeton, N.J. The 2021 Ivy League title hung in the balance as the two leading schools in the conference standings fought tooth and nail for every yard and every first down. A crowd of 10,003 sought to culminate Princeton’s homecoming festivities with an epic, competitive battle between No. 17/22 Princeton (5-0, 2-0 Ivy) and No. 16/RV Harvard (5-0, 2-0 Ivy). Yet at the end of the four-hour, five-overtime clash, football fans’ focus lay not with those in black and orange, relishing their victory, nor with those in crimson and white, who put up a valiant effort in defeat, but with those in black and white whose procedural error negated what should have been Tim Murphy’s 184th win at the helm of the Crimson.

The Tigers walked away from the game 6-0, finally emerging with the win after quarterback Cole Smith found wide receiver Jacob Bermilen in the back of the end zone in the fifth overtime period. Meanwhile, Harvard traveled back to Cambridge with a record of 5-1, convinced — rightly, as it turned out based on the Ivy League’s Sunday announcement — that it had won the contest with a quick slant from senior quarterback Jake Smith to junior wide receiver Kym Wimberly in the third overtime.

After the first two overtime drives for each team failed to produce a winner, Princeton began its drive at the three-yard line. It would be given one attempt to convert a two-point conversion and, if it succeeded and the Crimson failed to match, it would win the game. When senior linebacker Jack McGowan broke up Cole Smith’s pass, Harvard had the opportunity to come out on top with a conversion. Offensive coordinator Mickey Fein dialed up a play and trotted his offense out onto the field.

“The plan was to get the ball to [Wimberly] on the in-breaking route because of the no safety look,” explained Jake Smith when reached via text message.

Wimberly came down with the ball near the back of the end zone, and Princeton Stadium erupted. Thousands of Tigers fans fell silent as the smaller Crimson contingent on the opposite side of the field rejoiced. The Harvard sideline quickly emptied as players sprinted onto the field to mob their wide receiver and celebrate their victory. With players from both teams still on the field, officials announced that the play would be subject to an official review.

A few minutes later, with the stadium still buzzing, officials walked back out onto the field to announce their findings. While Wimberly had come down in bounds for a successful conversion, Princeton head coach Bob Surace had called a timeout before the ball was snapped, and referees had decided to grant the timeout despite only noticing it during the replay review. There was a collective cheer from Tigers fans as the Crimson offense trotted back out to the three-yard line to try it again.

“After Princeton was granted the timeout, I was very upset and confused,” Jake Smith wrote. “You can’t grant a timeout after a play has been carried out.”

According to Rule 12, Section 3 of the National Collegiate Athletic Association’s (NCAA) official rulebook, there are a wide variety of plays that are reviewable by the replay official. Because Wimberly’s catch was ruled a completed pass in the end zone and a scoring play, the review itself was completely legal. However, the rulebook stipulates in Rule 3, Section 3 that timeouts may only be requested “between the time the ball is declared dead and the next snap.” However, for a timeout request to be honored, the referee must grant it with a signal — no official did this prior to the snap. Timeouts are not listed among reviewable game decisions in Rule 12, Section 3.

Harvard scored on its second attempt as well, with Jake Smith completing a pass to senior wide receiver BJ Watson. However, Watson was flagged for offensive pass interference on the play, setting the Crimson back 15 yards. On its third try, it was unable to find the end zone as Jake Smith’s pass to sophomore tight end Haven Montefalco was broken up by Princeton linebacker Jeremiah Tyler.

“[We] had it won once… had it won twice… still, the most bizarre thing I’ve ever seen in my life,” Murphy said after the game.

The next morning, the Ivy League released a statement, in which it acknowledged that “the timeout should not have been granted and the play should have resulted in a successful two-point conversion,” but maintained that “the outcome of the game [would] stand as a win for Princeton.”

The announcement was heavily criticized by some Crimson players, who believed that the result should have been overturned.

“The announcement yesterday did provide [a] little satisfaction in knowing that the public now knows we won that game,” wrote first-year tight end Tyler Neville in a text message. “It also [aggravates] me more than anything because they are admitting that we won the game but will do nothing about it.”

There is no precedent for the NCAA overturning the result of a completed game. In one infamous 2015 game between Duke and the University of Miami, a seemingly miraculous 75-yard kickoff return featuring eight laterals that won Miami the game turned out to be fraught with officiating errors. The next day, Duke head coach David Cutliffe protested for the results to be overturned, but the NCAA has no procedure in place for reversing a game’s outcomes. Afterward, the Atlantic Coast Conference suspended the Duke-Miami referees for two league games.

The one game that saw its results change also took place between two Ivy League rivals, Cornell and Dartmouth, in 1940. In that game, Dartmouth held a 3-0 lead when the Big Red earned a fresh set of downs at the six-yard line. Although the Big Green managed a stop, referee Red Friesell lost track of what down it was and granted the Big Red what he thought was a fourth-down play from the six-yard line. After Cornell scored the game-winning touchdown, on the “fifth down,” Friesell’s mistake was discovered, and while the Eastern Intercollegiate Football Association (EIFA) could not overturn the result, the Big Red decided to forfeit the game and grant the Big Green a 3-0 victory. As far as the modern Ivy League and NCAA are concerned, there is no historical record of the NCAA reversing a game’s outcome because no option to do so exists within its rulebook.

On Monday afternoon, the Harvard Director of Athletics, Erin McDermott, released a statement, stating that the school was “extremely disappointed in the outcome of the football game due to a major officiating error” but that “we stand with the Ivy League and understand there is no recourse to determine a different result.”

So, Harvard has no choice but to regroup before Dartmouth visits on Oct. 30. The Big Green, who also enter the game with a 5-1 record after losing to Columbia on Friday night, oppose the Crimson in the middle game of Harvard’s series against its primary rivals for the conference title, which culminates on Nov. 6 in New York City against the 5-1 Columbia Lions. Harvard is still in contention for the Ivy League championship although a Crimson title would require a Tigers loss. If multiple teams finish with a 7-1 conference record, those teams would share the conference title since the Ancient Eight currently has no tiebreaker procedures for football.

Murphy expressed confidence after the game that, despite the heartbreaking ending, the Crimson would play with motivation against Dartmouth. Neville, who led the team with 58 receiving yards on four catches on Saturday, was quick to back up his coach’s assertion.

“We will be taking our anger out on Dartmouth,” he wrote.