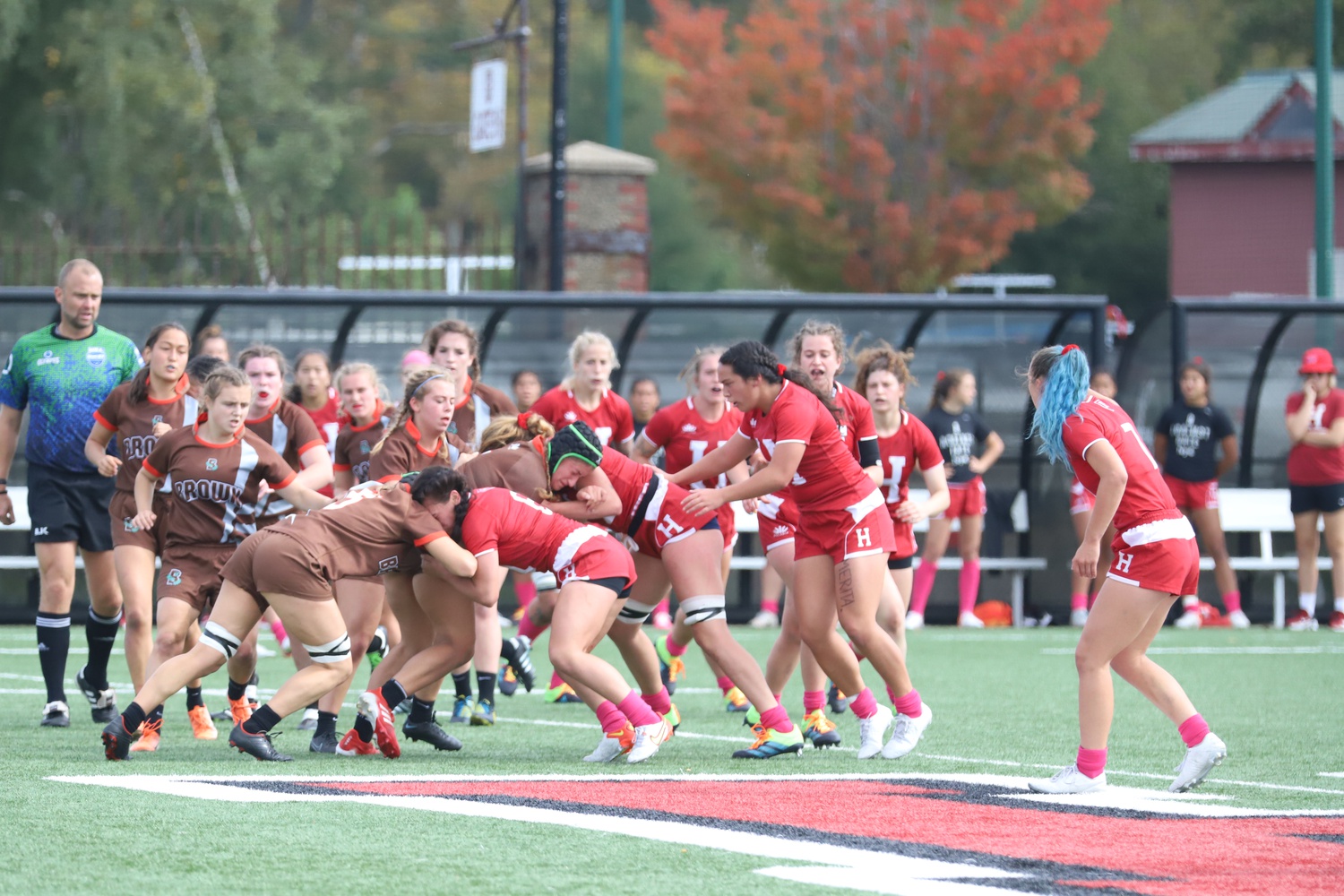 The Crimson defeated Brown (pictured above) to go 1-0 in the Ivy League but fell to Dartmouth on Saturday to drop to 1-1 in the league, and 5-1 overall. By Owen A. Berger
By Lucy Connor and Elizabeth Pachus, Crimson Staff Writers

Following five fierce wins in its 2021 season, the Harvard women’s rugby team (5-1, Ivy 1-1) suffered its first defeat against Dartmouth (6-0, Ivy 2-0) on Saturday. The Big Green came out strong and fast right off the first whistle and was able to quell all future Crimson momentum in a 45-31 victory.

Taking advantage of holes in Harvard’s defense, Dartmouth dominated possession for most of the first half, jumping out to a 26-0 lead. Right before the half, however, senior wing Emma Kearney saw a huge run that led to a try from fellow senior wing Sabrina Kim. The Crimson managed to trim the deficit to 26-5 before the intermission, allowing the team to enter halftime with a new sense of confidence.

“We had some momentum right before the half, and then we were able to regroup at the half,” senior prop/lock Erica Jarrell said. “I think that's really all we needed to get over that hump. The nature of rugby with no stoppages or anything… if something doesn't go your way, things can just kind of snowball really fast, especially with a young team.”

While the opponent entered Harvard’s try zone within the first minute of the second half, the Crimson was able to remember the adjustments discussed at halftime and respond with a momentum shift. Down 38-5 at the 48-minute mark, Harvard appeared undeterred, and the team saw three unanswered tries, culminating in 19 points.

“We played a really, really, really strong second half,” emphasized senior wing Emma Kearney, who notched two back-to-back tries. “We narrowed the score from that first half to the second half. We were proud that we were able to mentally make that switch from being down.”

While the momentum shift in Harvard’s favor was not enough to change the outcome, the team looks at this loss optimistically.

“I think honestly, I'm grateful for it,” Jarrell reflected. “It's a lot more intimidating to be at the top of a mountain — this undefeated and sort of unchallenged team… It's kind of refreshing to sort of be on the other side of that. We just go back to the drawing board and get some high-quality data on what we actually need to work on.”

The Harvard-Dartmouth rivalry is one of the most prominent in the league, coming from two teams that historically lead the rankings and draw from top talent from across the country. It has remained steady the past five years, with the teams continuously hoping to edge the other in both the regular season, the Ivy League, and the NIRA playoffs.

While Dartmouth was victorious this time, in their previous matchup on Nov. 9, 2019, it was Harvard who was crowned NIRA champions following a thrilling 23-22 win over the Big Green in the semifinals and an 18-7 victory over Army in the title game. That same season, Harvard had bested Dartmouth in the regular season before falling in the Ivy League Championship and then redeeming itself in the NIRA semifinals. Thus, in 2019, the Crimson took two of three from the Big Green, and this season too, rematches could be in store.

The parity in the rivalry extends back beyond the 2019 season. Dartmouth and Harvard are 3-3 in their past six matchups spanning back to 2018, with neither team able to notch the pair of accolades at the same time in the past two seasons: both times the Ivys and NIRA championships have been split between the two schools.

Both Jarrell and Kearney have seen the growth of this rivalry since their first-year seasons. Continuously vying for triumph, the matchups are eagerly anticipated each year.

“It's really cool to be able to have such an intense rivalry and then also have mutual respect,” Kearney remarked.

Jarell seconded the sentiment, saying, “We are each other's greatest motivation and greatest challenge every season.”

Eager to get back on the field, the Crimson squad is setting its sights on the next challenge.

“We can play with this really good team, and the second half was ours,” Kearney said. “What really matters is going forward. We’re really excited about how we played even though the outcome isn't what we wanted.”

​​— Staff writer Lucy Connor can be reached at lucy.connor@thecrimson.com.