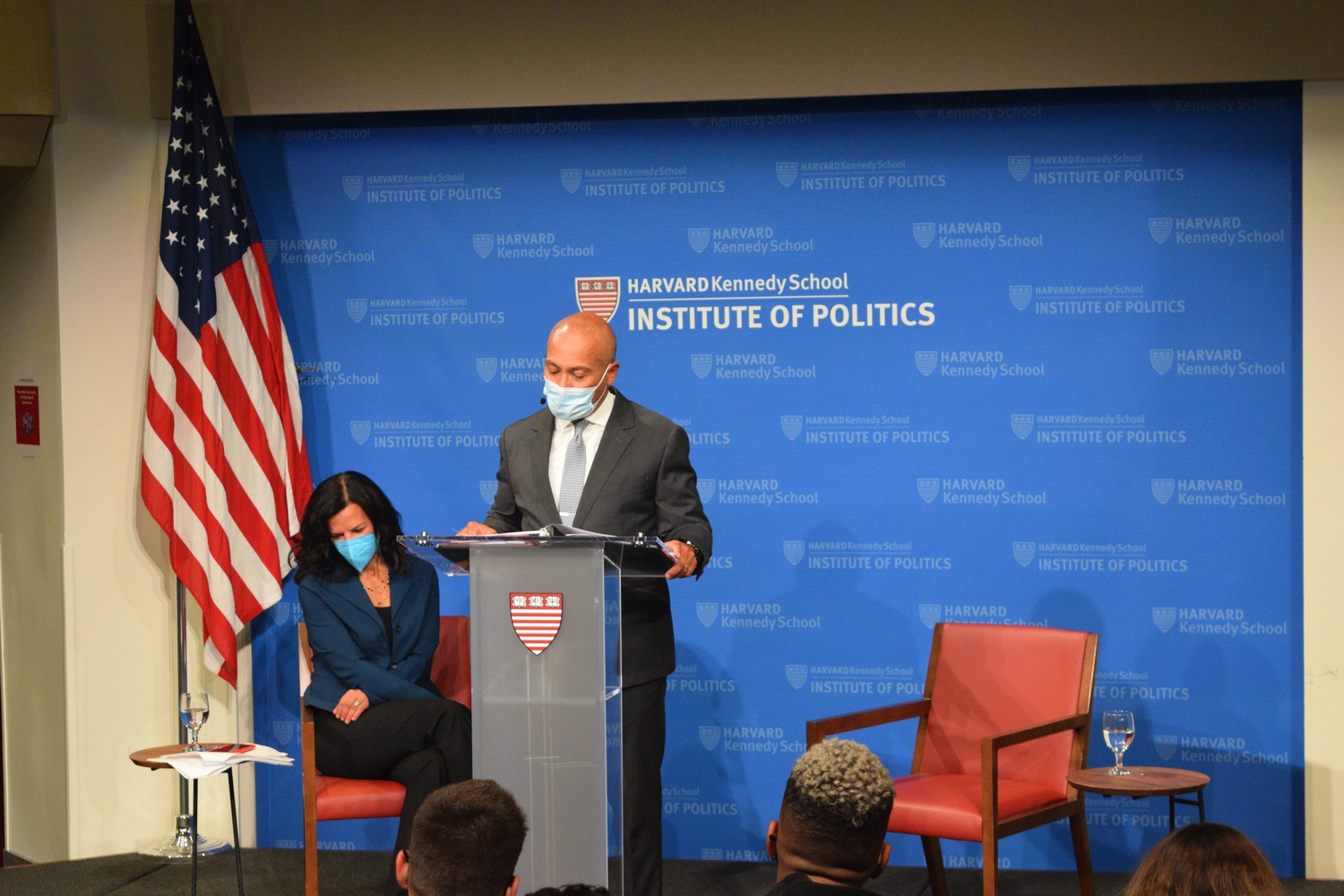 Former Massachusetts Governor Deval Patrick ’78 shared his insights into what it takes to be a great leader in the face of political divisiveness at the JFK Jr. Forum on Monday.

Patrick — now a senior advisor at Bain Capital and one of three co-chairs of the bipartisan Future of Technology Commision — reflected on how his upbringing impacted his leadership style and discussed how to push back against challenges to democracy.

Patrick, a Democrat, began by detailing his childhood in Chicago’s South Side, and how the social support that the country provided him afforded him confidence in the United States.

“There were food stamps when we were hungry and affordable housing when we needed shelter, there were well prepared and loving teachers in those public classrooms, grants, and affordable student loan for college, an economy expanding to make room for me when I was ready and a reliable bus or subway to get me to that job, and home again safely. I am the symbol and the result of my grandmother's faith in America,” he said. “I owe it to her to be a patriot."

Patrick reflected on significant moments in his tenure in the State House, including the bombing of the Boston Marathon in 2013.

In the aftermath of the Boston Marathon, Patrick said he worked to contend with “grief and righteous anger.”

“I tried to balance our grief and righteous anger with the need to keep the community together positive and facing forward,” Patrick said. After the attack, he said he also tried to evoke the spirit of patriotism.

“True patriotism, it seems to me, is about national aspiration,” he said.

Patrick also reflected on a fraught choice he made in 2014, when then-President Barack Obama’s administration requested states offer shelter to minors who crossed the border alone. He received both praise and criticism after his eventual decision to offer up two sites in Massachusetts to house the children.

Patrick acknowledged the multitude of threats to democracy in the United States, such as partisan gerrymandering, restrictive voting laws, and the insurrection at the U.S. Capitol in January 2021.

He urged young people to turn out to vote and stay engaged between elections in order to hold their elected officials accountable.

“If American democracy is to have a chance, more of us have better summon up our own patriotism,” Patrick said.

Azeez S. Richardson ’25 said he cherished the event, which was part of the Seymour E. and Ruth B. Harris Lecture Series.

“Once I found out that Deval Patrick was speaking, I knew that I had to be here,” Richardson said. “His speech gave us clarity on how best to approach crises from not just a policy or political perspective but also from a moral or mental perspective.”

“For me, hearing the reclaiming of the term patriot, that has been reduced to flag waving and reduced to pure symbolism, rather than the actual difficult challenge of being a patriot — which is building institutions that last, which is advocating for justice for everyone — was pretty moving,” Romero said.