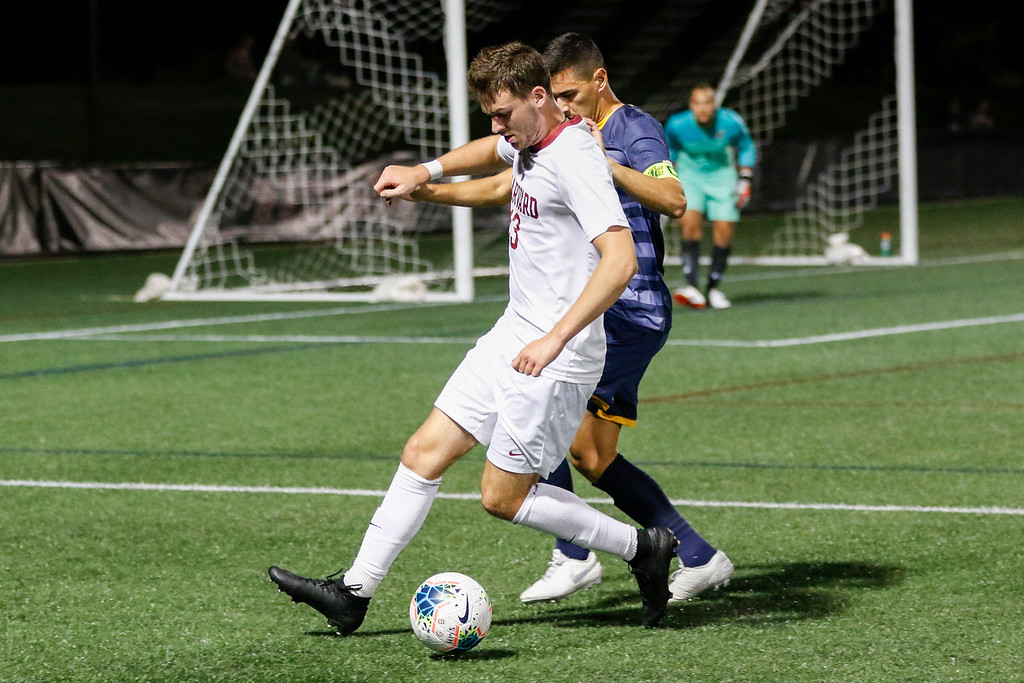 Harvard relied on its defense on Saturday to battle the defending Ivy League Champions to a draw. Despite some close calls, including a shot that ricocheted off the crossbar for the Crimson, the game ended locked at 0-0. By Timothy R. O'Meara
By Eamon J. McLoughlin, Crimson Staff Writer

Harvard opened its 2021 Ivy League slate against Yale on Saturday night, holding the reigning Ivy League champions to a 0-0 tie through overtime in New Haven.

In an eventful but ultimately scoreless affair, Harvard (3-3-2, 0-0-1 Ivy League) was not able to break down Yale’s defense and had to settle for a draw after 110 minutes in Connecticut. More than 800 fans came out to the game, with the match being the first time the rivals have played in almost two years.

“This was the most intense game and hostile environment we’ve played in so far,” sophomore defender Nik White said. “Holding the reigning champions to a draw on their field definitely gives us confidence moving forward, but we know we need to continue improving in certain aspects.”

White featured for the whole 110 minutes for the Crimson, along with fellow center back, first-year Jan Riecke, junior goalkeeper Oskar Nilsson, and defender and captain Fernando Docters. Docters received an early yellow card in the eighteenth minute, but remained disciplined throughout the match and was able to keep the Bulldogs’ attack in check despite the caution.

Harvard was somewhat slow to start in the first half, conceding the majority of the possession to Yale while getting outshot six to three, and conceding seven corners while only winning two. But despite having less possession, the Crimson defended well and kept the Bulldogs from having any clear-cut chances in the first half.

Harvard had a good chance to go ahead in the 36th minute after first-year midfielder Sam Bjarnason shot from the edge of the crowded Yale box, but the strike skidded wide as the crowd held its breath.

The Bulldogs had their best chance to go ahead just on the other side of halftime, as Nilsson bailed the Crimson out after Yale got ahead on a dangerous ball whipped into the box. The header connected perfectly for what seemed like a sure goal, but Nilsson got across to keep the game scoreless.

“Ivy League games become more intense because of the engagement from the fans and the prestige between the schools, especially against a rival like Yale,” Nilsson said of the night. “It’s important to handle and grow with that pressure.”

The rest of the second half was played on Harvard’s terms, as the Crimson settled into the game and began to dominate possession for long stretches of time. Harvard outshot the Bulldogs nine to six in the second half while winning seven corners and holding Yale to just one.

The Crimson came within inches of taking the game in the 77th minute, as in-form first-year striker Alessandro Arlotti was denied the game-winner by the crossbar. Docters took a shot from deep after a corner was cleared, and Arlotti deftly redirected the strike, leaving the Yale goalkeeper stranded, but the shot bounced off the crossbar, and play continued.

With neither team finding the back of the net through 90 minutes, the game went to overtime, the fourth time Harvard has played overtime this season in only eight games. While the Crimson continued to play positively, neither side was able to find the golden goal, and both teams had to settle for a draw.

“This was the first taste of Ivy League action for half of our squad. We were very aware of the significance of Harvard versus Yale heading into the game and made sure we represented the university with pride,” White said of the matchup. “I’m so proud of the desire and focus we showed to earn a hard-fought away point against the reigning champions.”

The draw means that the Crimson still leads the all-time matchup at 59-39-13. Harvard returns home to play Boston University on Tuesday, before making the trek out to Ithaca to face Cornell on Saturday.