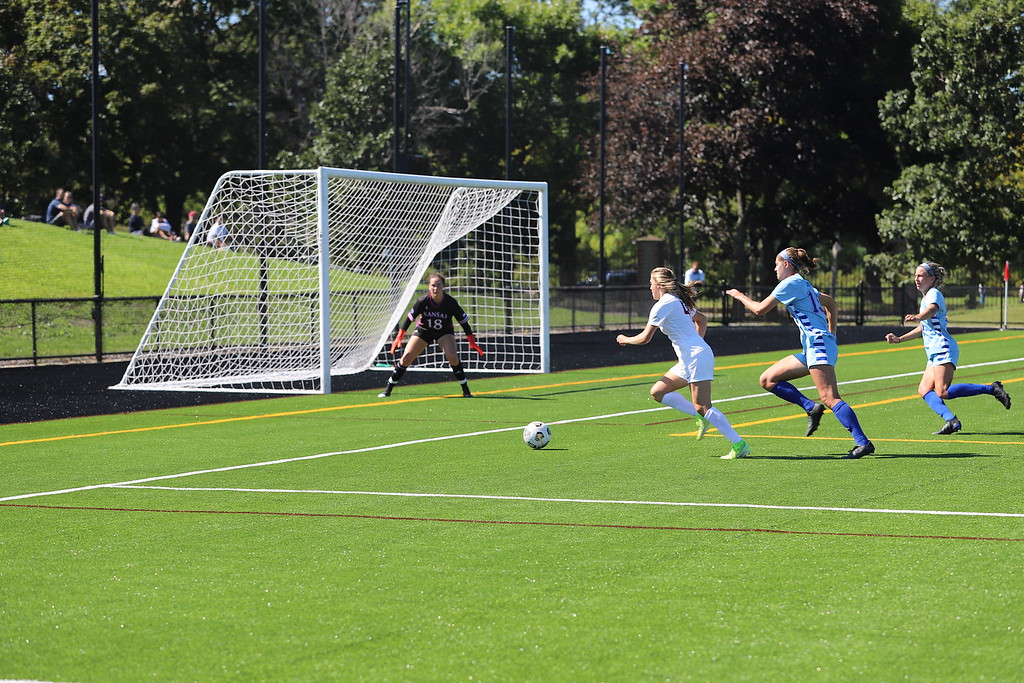 First-year Midfielder Hannah Bebar prepares to shoot in Harvard’s win over Kansas on September 19. Against Yale on Saturday, Harvard took the lead early in the second half and did not look back. By Owen A. Berger
By Lev Cohen, Crimson Staff Writer

No.10/20 Harvard spoiled Yale’s alumni weekend on Saturday in New Haven, controlling the game throughout en route to a 2-0 win at Reese Stadium that allowed the Crimson to remain one of the four undefeated teams in the nation. Harvard (8-0-1, 2-0-0 Ivy League) had chances to take the lead in the first half before getting second-half goals from two unlikely sources, with junior right back Jordan Di Verniero capitalizing on a goalkeeping mistake to tally her first of the season before sophomore midfielder Hannah Griffin scored the first goal of her college career in the game’s dying minutes to clinch a win over the Crimson’s biggest rival.

As has often been the case this season, Harvard dominated both possession and chances, taking 23 shots, including 17 on goal, to Yale’s six. The 2-0 final score flatters the Bulldogs (1-9, 0-2), who were often on their heels and had a few squandered Crimson chances and some impressive saves by first-year goalie and Baylor transfer Maya Bellomo to thank for the relatively modest scoreline.

Bellomo was called upon more often than Yale would have liked. She made 15 saves on the day and was constantly darting around the six-yard box as she aggressively met the countless Harvard through balls and one-on-ones that she had to face. Her performance was not without incident, however. She looked vulnerable on the Crimson’s set pieces and spilled the ball a few times, one of which was responsible for Harvard’s first goal. She attempted to collect a dangerous cross from talismanic first-year midfielder Hannah Bebar but could not do so cleanly, and Di Verniero was there to pounce on the rebound and catapult it into the net.

“[Di Verniero] has had a number of close calls this season and is unlucky not to be on the scoresheet in previous games,” head coach Chris Hamblin said. “I’m really glad she opened her account this year by being persistent and following up on a loose ball.”

While her cross did lead to a Crimson goal, Bebar was not credited with an assist, meaning the end of her five-game points streak. Junior forward Angela Caloia, another name often on the scoresheet, came very close to scoring on multiple occasions, none more so than when two of her shots were cleared off the line by defenders, one in each half. Caloia racked up seven shots, easily a season-high.

Yale never really threatened to score, but it did ramp up the pressure late in the game, with a high press that at least temporarily took Harvard out of its attacking flow and gave the Bulldogs their first semblance of sustained possession in the Crimson’s half. It was on a counterattack against the press, however, that Griffin was able to showcase her speed and notch her first career goal, as she ran onto the ball at midfield and sprinted past the stretched Yale defense before finishing past Bellomo.

“We know that if teams come to press us, we have the ability to play through that press and get at them in numbers-up situations,” Hamblin said. “We are comfortable with those situations so as they started to press higher we knew we were going to get some chances, and [Griffin] took it perfectly.”

While Griffin’s goal ended up being immaterial to the game’s outcome, it took on increased significance because of Griffin’s long journey to college soccer minutes, having missed her entire first-year season due to injury in 2019. Now that she is back and firing on all cylinders, she has become a key part of the team’s attack.

“Hannah Griffin’s a great player,” said Bebar after Harvard’s victory over Penn last weekend. “She is able to get in behind and has a lot of pace, so I think we will continue to have a lot of success playing her in behind. I love playing with her and with all of our forwards.”

The Crimson’s defense again also looked comfortable, allowing Harvard to keep a second consecutive clean sheet to start the Ivy League season. The spine of the team — with senior center back Lara Schenk partnering with first-year Jade Rose, and captain Sophie Hirst next to first-year Josefine Hasbo ahead of them in central midfield — has been solid and looks to be building chemistry, having played nearly every minute of the season together.

“I think we defended really well from front to back,” Hamblin said. “We kept the ball really well, and when you keep the ball well, you don’t give the opposition many opportunities to attack you. Our ability to possess drove our defensive performance because we didn’t give many opportunities away. Then when we did give the ball away we were able to defend pretty comprehensively and didn’t give them too much.”

First-year forward Ainsley Ahmadian and senior forward Murphy Agnew remained out due to injuries they suffered against Kansas two weekends ago. Hamblin said he anticipates that they will return to training this week and potentially be involved again as soon as next weekend. Griffin and sophomore forward Gabby DelPico started in their places on Saturday, but the team will be eager to get them back before the pivotal Ivy League matchups in the weekends ahead.

The Crimson will be on the road again next weekend as it faces Cornell in Ithaca. The Big Red (2-6-2, 1-1-0) notched its first Ivy League win since 2016 in an opening weekend victory over Columbia before falling 2-0 at Penn. Harvard will look to move to 3-0 in the conference season before returning home for two mammoth showdowns with its toughest Ancient Eight competition, Brown and Princeton.