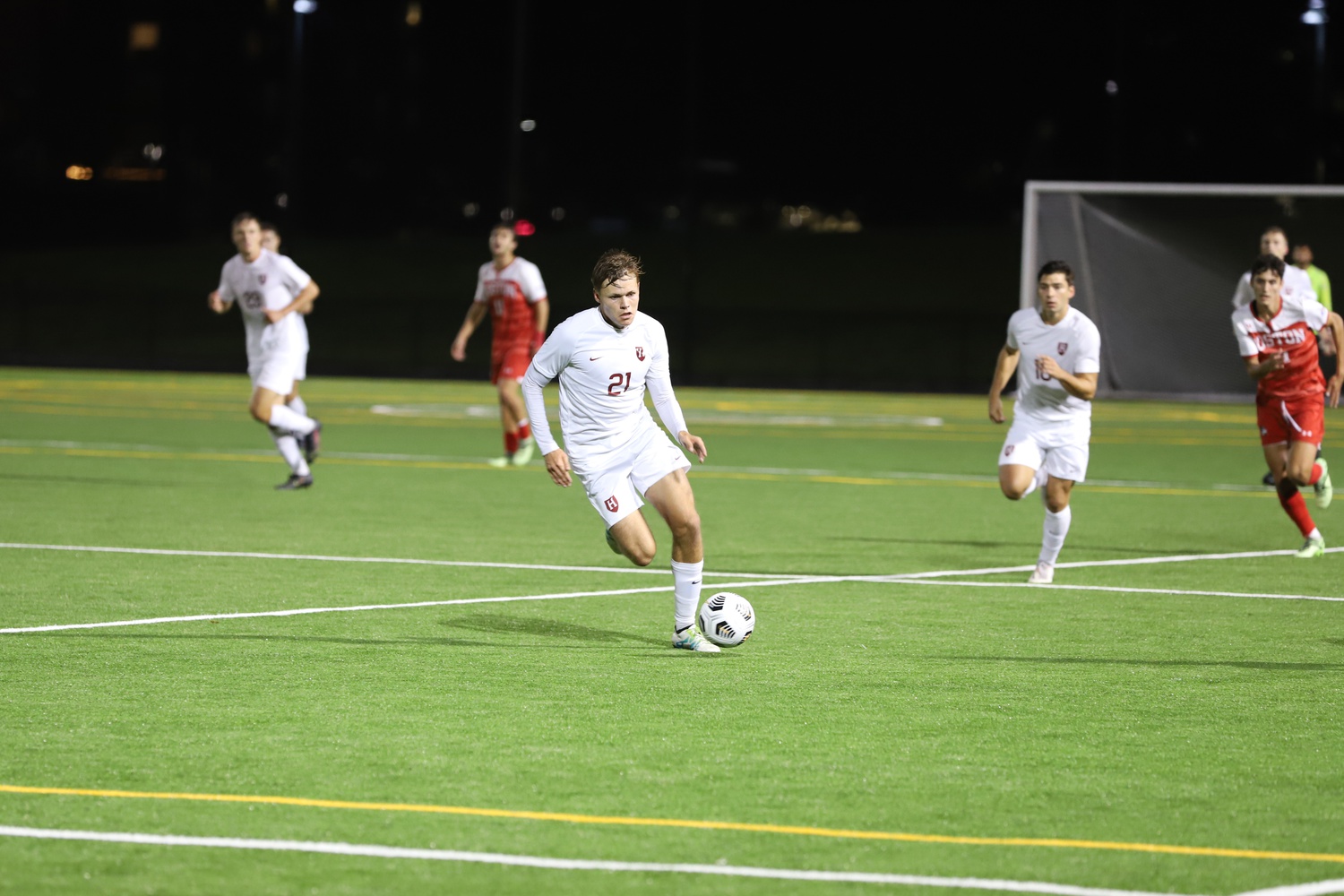 Sophomore midfielder Willem Ebbinge leads the attack, netting his third assist of the season on the way to a 2-1 victory for Harvard. By Owen A. Berger
By Eamon J. McLoughlin, Crimson Staff Writer

Harvard held on to defeat Boston University by a score of 2-1 in a cross-Beantown matchup at Jordan Field on Tuesday night, with all three goals coming in the first 25 minutes of the game.

Harvard's win over the Terriers, which brings the team's record to 4-3-2 (0-0-1 Ivy League), comes in its second-to-last non-conference matchup of the season. With the exception of its away trip to Holy Cross in two weeks, all of the Crimson’s remaining games will be against Ivy League opposition.

“We managed to stay composed once BU picked up the pace of the game and came at us with more intensity. We did well to try and play out as often as possible and control the tempo of the game,” junior goalkeeper Gianluca Trofa said. “Playing at home is great when fans come out to support the team, and it gives us an incentive to push through tough games that come down to the wire like this one.”

First-year forward Alessandro Arlotti continued his string of clutch performances for Harvard on the night, grabbing his team-best fourth goal of the season, three of which have been game-winners. His performances have grabbed the attention of the Ivy League as he was awarded Ivy League Rookie of the Week for his efforts last Monday.

Arlotti was assisted on the goal by sophomore midfielder Willem Ebbinge, who grabbed his third assist of the season on the play. Ebbinge picked up the ball in the 23rd minute after the Terriers lost possession just outside their own box and worked hard to get to the ball before it crossed the endline. His first-time cross took the BU keeper out of the equation, and Arlotti got in front of his man to poke into the empty net for a 2-1 lead. This third assist brings Ebbinge level with Arlotti for most assists for the Crimson so far this season.

“I thought we created plenty of chances and generally managed the game quite well, but we will need to be more clinical going forward if we really want to push on and challenge for the Ivy League,” Ebbinge said of the game.

The stat sheet spoke to Harvard’s dominance on the night, as the Crimson outshot BU 20-13, with 10 on target to the Terriers’ five. BU’s keeper was forced into eight saves, as opposed to just four for Trofa, and three Terriers picked up yellow cards on the night, compared to just one for Harvard, which was issued to first-year defender Kristjan Gunnarson in the 69th minute. The Crimson also had more corners, with six to BU’s four.

Harvard had taken an early lead in just the fourth minute, with sophomore midfielder James Fahmy netting his first assist of the season in his first start. Fahmy picked the pocket of a BU attacker in the Crimson’s box and launched the ball downfield to junior forward Martin Vician.

Vician fought to pick up the ball between two defenders and was met by the onrushing BU goalkeeper. Vician waited patiently for the keeper to dive before deftly chipping over the top to find the back of the net. The goal was Vician’s second of the season.

Harvard’s lead was short-lived, as the Terriers equalized just ten minutes later with a shot from the edge of the area. The goal was the first conceded by junior goalkeeper Gianluca Trofa this season, through 195 minutes of play. Trofa racked up 17 saves in that time, with 12 of those coming in his standout performance against Merrimack, where he also grabbed an assist.

“Saturday is going to be a great opportunity for us to put everything we have worked on this season to the test,” Trofa said. “We will definitely look to fix some mistakes we made in the game in training this week to prepare for the conference game this weekend.”

The Crimson's next match comes this Saturday, as it travels to Ithaca, N.Y., to face No. 24 Cornell in its second Ivy League matchup of the season. The Big Red opened its Ivy League play with a convincing 3-0 win at Penn on Saturday, which was enough to get Cornell into the Top 25, as it currently sits at 6-1-1.

The prospect of playing a ranked opponent won't scare Harvard though, as its game against No. 7 University of New Hampshire earlier this season was closely contested, though the contest eventually ended 3-1.

“Every game is important and a must-win,” Trofa continued. “And we believe that if we are playing at our best there isn’t a team in the conference that should be able to beat us.”

Looking ahead at the Ivy League slate, the Big Red is the only ranked Ancient Eight side, but it is still anyone’s title to take. Harvard, Cornell, and Penn are the only Ivy League teams sitting above .500 this season, with Princeton sitting at 4-4. Although overall record is a rough metric to judge relative strength, the Crimson has shown it can go all the way this year, after drawing the reigning champions away at Yale and battling to the end with a top 10 team away at New Hampshire. Saturday will be a big test for the Crimson and a chance to show that it can back up its record.

“We are well aware that Cornell has had a robust start to its season and that a result will be vital for our Ivy League aspirations,” Ebbinge said of Saturday’s matchup. “Nonetheless, the boys are chomping at the bit and feeling confident that we can return from Ithaca with a decent result.”