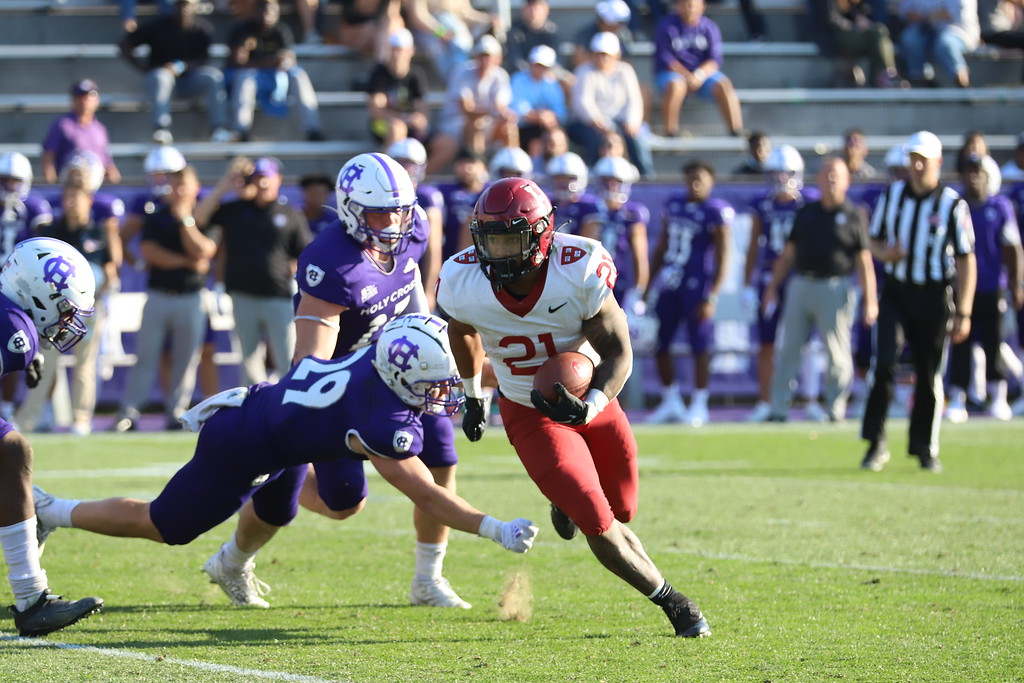 Sophomore running back Aidan Borguet leaves a pair of Holy Cross defenders in the dust. Borguet finished last Saturday’s contest with 59 rushing yards and a touchdown. By Owen A. Berger
By Griffin Wong, Crimson Staff Writer

Last weekend, Harvard (3-0, 1-0 Ivy) chugged into Worcester on the commuter rail and, after defeating No. 24/RV Holy Cross 38-13, left on the Acela, racing towards the heart of the Ivy League regular season behind the momentum of a statement victory against a nationally ranked opponent. Cornell (0-3, 0-1 Ivy) will try to stop the newly-minted No. 22 Crimson in its tracks as the Big Red travel to Harvard Stadium in both teams’ second conference matchup of the 2021 season. The game, which will be televised on ESPN+, will take place on Oct. 9 at 1:30 p.m. ET.

Other Football Championship Series (FCS) coaches took note of the Crimson’s victory, given the strength of their opponent. The Crusaders were coming off a statement victory of their own, on the road against No. 20 Monmouth on Sept. 25, and entered the game against Harvard with a No. 24 ranking. However, Harvard dispatched them quickly, jumping out to an early 24-0 lead, as senior quarterback Jake Smith tossed three touchdown passes and the defense intercepted three Holy Cross passes.

After the game, Harvard, which had received votes in the FCS coaches’ poll entering the matchup, jumped to No. 22, its first time being nationally ranked since Nov. 11, 2016, when the Crimson, then 7-1, dropped a conference matchup to Penn, 27-14. After the team was projected to finish fourth in an Ivy League preseason media poll, it is one of only two top-25 teams in the Ancient Eight, ahead of No. 24 Princeton.

Despite the team’s accomplishment, junior linebacker Chris Smith insisted that he placed no special emphasis on the number. Chris Smith, who ranks fourth in the FCS with 0.67 forced fumbles per game, maintained his focus on the course of the entire season.

“We’ve still got a lot to prove,” he said. “We still have got a lot of good teams that we’ve got to face in our schedule, so we’re not trying to get complacent, not just happy with being ranked but obviously our goal at the end is to win the Ivy League championship.”

Coach Tim Murphy’s road to a tenth Ivy League championship will have to go through Cornell, which is coming off a 21-10 loss to Bucknell in its last game. In that game, quarterbacks Ben Mays and Richie Kenney racked up 306 yards through the air and the front seven, led by junior linebacker Jake Stebbins, held the Bison to only 97 yards on 39 carries (2.5 yards per attempt). However, the Big Red picked up only 35 rushing yards on its 23 attempts for a meager average of 1.5 yards per attempt, a number it surely hopes to improve on against the Crimson defense, which is the country’s fourth-stingiest, conceding 49.7 rushing yards per game so far.

Cornell is the best rushing defense that Harvard will have faced so far, ranking 19th in the FCS after allowing an average of 99.7 rushing yards over its first three conferences. However, it counters with a formidable challenge, its eighth-ranked rushing offense (239 yards per game). In its victories over Georgetown and Brown, the Crimson inflicted most of its damage on the ground behind its trio of talented running backs, led by junior Aaron Shampklin, who leads the FCS with 125.3 rushing yards per game. Sophomore Aidan Borguet was the 2019 Ivy League Rookie of the Year, and sophomore Sone Ntoh has found paydirt twice this season.

“I think [Cornell] put together a pretty good game plan for Bucknell, but I’ll say this: I like [Borguet] and [Shampklin] a lot better than any running back we’re going to see on film or that we’re playing against,” Jake Smith said. “We’re going to be ready to go and I think 2.5 yards per rush is something that we’re going to definitely try to beat, and beat it well.”

After being pressed into action in the fourth quarter of Harvard’s win against Brown on Sept. 24, when sophomore quarterback Charlie Dean suffered an injury, Jake Smith started against Holy Cross. In his first action since 2019, he completed 20 of his 31 passes for 229 yards and three touchdowns. His performance garnered two awards: the Ivy League Offensive Player of the Week and the New England Football Association’s Golden Helmet award for Division I.

If Jake Smith starts again against Cornell, he expects to be more prepared than he had been against Holy Cross, when he had to adjust from receiving minimal snaps in the early season to having control of the first-team offense in the span of a week. He already has extensive starting experience; he was the signal-caller of choice between 2017 and 2019 and holds top-ten program ranks in career completion percentage, passing yards, and passing touchdowns.

“This week, [I’ve been] basically just focusing on seeing the defense, watching those safeties and other defenders, and move around and [watching] out for that,” he said. “[I worked on] zeroing in on a couple of the reads I missed the past week.”

Against the Crusaders, Jake Smith’s top targets were first-year wide receiver Kaedyn Odermann, who turned his four catches into 70 yards and a touchdown, junior wide receiver Kym Wimberley, who hauled in three passes for 56 yards and a touchdown, and junior tight end Adam Shepherd, who caught a 29-yard touchdown pass to effectively seal the victory. Odermann’s performance earned him Ivy League Rookie of the Week, the first Crimson to do so since Borguet in the final week of 2019. In addition to Smith and Odermann, junior punter Jon Sot, a two-time All-Ivy League selection, was named Ivy League Special Teams Player of the Week after seeing five punts downed inside the 20-yard line against Holy Cross.

In the win against Holy Cross, offensive coordinator Mickey Fein turned to the air more often than he had against Georgetown and Brown. Harvard’s 229 passing yards marked its most prolific passing performance of the season, in part because the Crusaders did a good job holding Shampklin, Borguet and Ntoh in check. The three running backs managed to gain 139 yards in total, but required 39 carries to do so (3.6 yards per attempt). Overall, Murphy is likely hoping to present a balanced offense against the Big Red.

“[Fein] does a really good job with the play calls. Some of that depends on what the defense is showing us, but for the most part, I think we have a pretty balanced attack,” Jake Smith said.

Harvard’s offense will have to be both multi-dimensional and prolific to find success against the big and physical Cornell defense. Two of its safeties, Logan Thut and Chase Scarboro, weigh more than 205 pounds. In addition to its stout performance against Bucknell’s rushing attack, its oversized secondary caused consistent problems for the Bison offense, for quarterbacks Nick Semptimphelter and Tyler Beverett combined for just 146 passing yards. 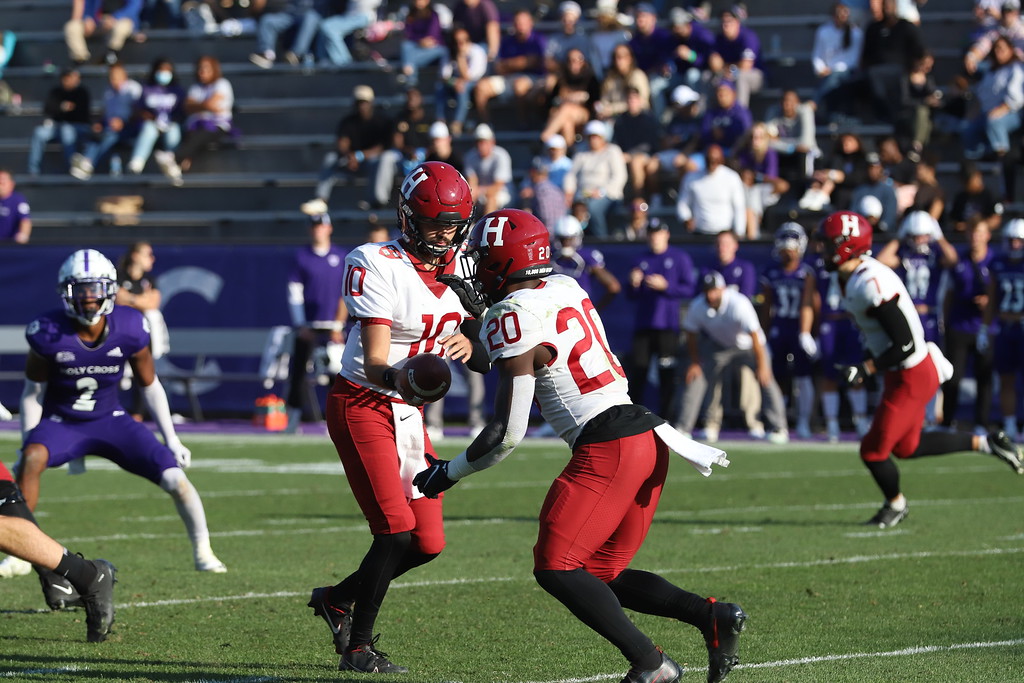 Senior quarterback Jake Smith hands the ball off to Aaron Shampklin. The junior running back has enjoyed a strong start to the 2021 campaign, with 376 rushing yards and four scores to his credit through three games. By Owen A. Berger

Fortunately for the Crimson, it has seen a similarly physical defense in Holy Cross and found success against it. Jake Smith noted that while offensive plans can vary a lot from week to week depending on the opponent, there were a lot of similarities between the Crusaders’ defense and the Big Red’s.

Stebbins led the Big Red in sacks in 2019 with 4.5 and ranked second with 58 total tackles, earning Ivy League Rookie of the Week honors twice and being named to the All-Ivy Second Team, the only first-year defensive player to earn an All-Ivy selection. So far in 2021, he has already racked up 27 tackles, tying for 26th nationally with 9.0 tackles per game. In addition to Stebbins, cornerback Kenan Clarke and defensive lineman Onome Kessington share the team lead with one sack.

On the other side of the ball, the Big Red relies primarily on Mays, who assumed the starting job prior to the Bucknell game. In addition to his 256 passing yards, he contributed 15 yards on the ground in five carries. He took over from Kenney, who was the team’s starting quarterback in 2019 and also saw action in the fourth quarter against the Bison, completing 5 of his 11 passes for 50 yards and adding two yards on the ground. Its rushing attack is spearheaded by SK Howard, who leads the team with 67 rushing yards this season. Mays’ and Kenney’s favorite targets thus far have been Thomas Glover and Curtis Raymond.

The Crimson has also faced a similar offense to Cornell’s: Brown’s, which it limited to just fourteen rushing yards on Sept. 24. Although the Big Red defense is physical, Chris Smith expressed confidence in both Harvard’s defensive line and defensive coordinator Scott Larkee ‘99’s game plan.

If Harvard is able to execute its gameplan on Saturday afternoon and earn a victory, it will be just its third in the team’s last five meetings, after Cornell eked out narrow wins in 2017 and 2018. Overall, the Crimson hold a 48-34-2 advantage in the series, which began with a 77-0 Harvard win in 1890. It will also improve Harvard’s record in Ivy League matchups to 279-162-9 (.630), the winningest mark in the Ancient Eight.

With two of its three non-conference games behind it, Harvard enters a crucial stretch as it hopes to match Penn in second place with 18 Ivy League titles all-time. Six of its remaining seven games are against conference opponents, with the lone exception being the home tilt against Lafayette on Oct. 16. Jake Smith said that while the team takes every opponent seriously, it emphasizes its conference schedule.