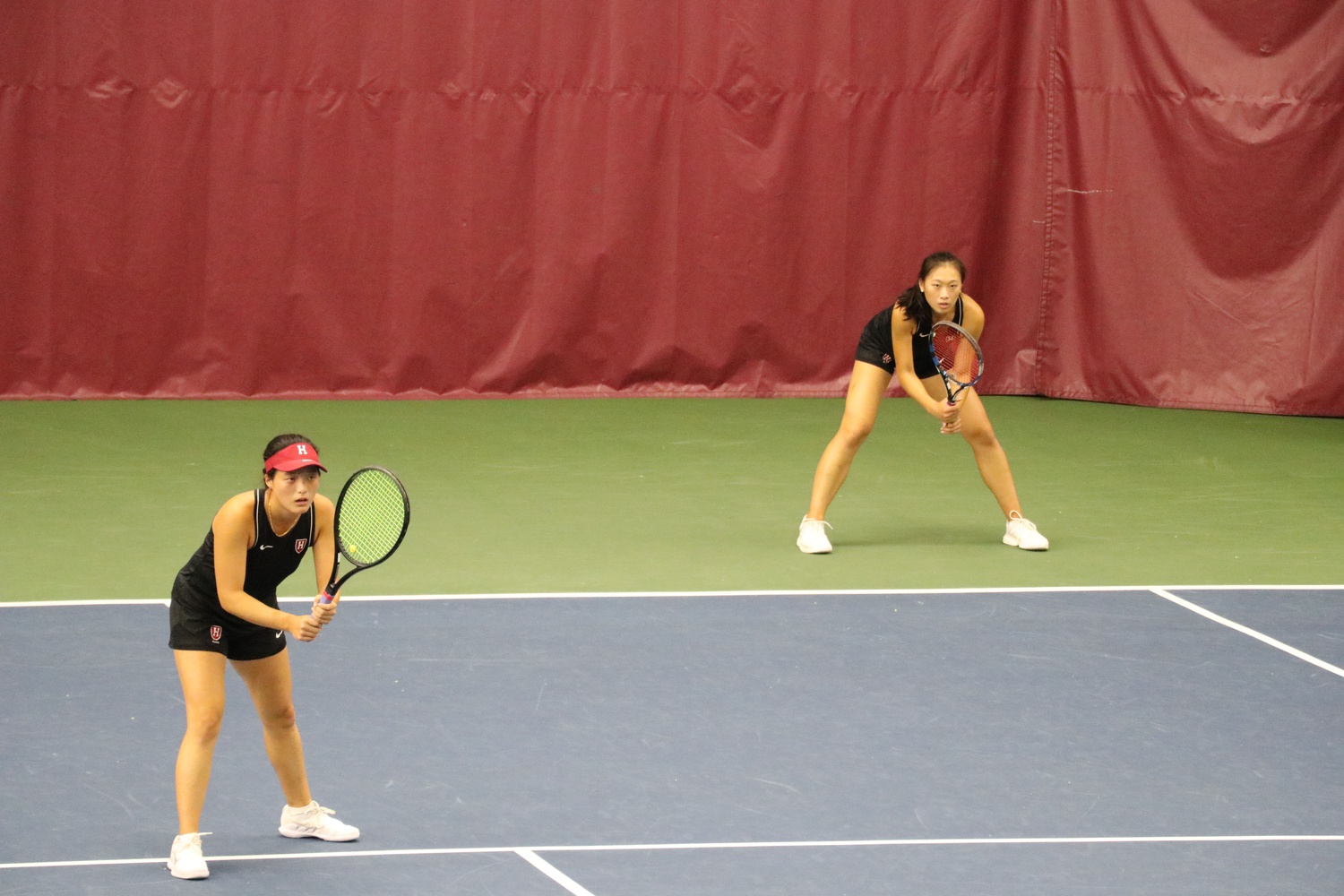 First-year Angel You and senior Rachel Lim team up in doubles against Boston University. By Courtesy of Harvard Athletic Communications
By Caroline Gage

The Harvard women’s tennis team had a successful weekend at the Intercollegiate Tennis Association’s Northeast Regionals, with three players qualifying for the Northeast Super Regional tournament. The Crimson competed against players from regional schools and members of the Ivy League at the United States Military Academy at West Point.

“I’m super proud of the attitudes and effort, and we’re definitely moving in the right direction,” said veteran head coach Traci Green, who was named the Ragatz Family Harvard Women’s Coach of Excellence in 2021. “I’m excited by where this team is headed.”

The Northeast Regional was the Crimson’s first away tournament since the Covid-19 pandemic cut the 2020-21 season short.

“It was exciting and a wonderful experience to have a road trip with our team again,” Green said. “It’s been so long since we’ve had the chance to be on the road […] so we’re super grateful to have the opportunity to compete.”

Sophomore Iveta Daujoutaite capped off this weekend’s tournament with a 6-4, 7-5 victory over Dartmouth’s Chidimma Okpara. In previous rounds of the event, she bested Fairfield’s Scarlett Hutchinson in a tiebreaker after battling back from a first-set loss. Daujoutaite will also compete alongside first-year Maxi Duncan in doubles at super regionals.

First-year Rachel Arbitman qualified for the next round of the singles competition after three decisive straight-set wins. In the final round of the tournament, she defeated Boston University’s Michelle Kleynerman 6-4, 6-4.

“I had a great time just competing on the court. It was my first individual college tournament, so it was really great to get out there and compete for Harvard,” Arbitman said.

Daujoutaite and Duncan automatically qualified for the super regional tournament and did not compete together at West Point. Arbitman and fellow first-year Holly Fischer fell to Dartmouth’s Chloe Yoo and Nicole Conard in a close tiebreak, 8-7(5). The Crimson’s doubles teams competing were unable to qualify for the super regionals. First-year Angel You and senior Rachel Lim reached the round of 16 but lost a close match, 8-6, against a doubles pairing from the University of Massachusetts.

In the coming practices before the next round of the competition, the team aims to focus on improving specific components of its game.

“Everyone who qualified will be honing in on various aspects of their game where they need to improve, and they will specifically be working on raising their levels at the right times,” Green shared. “From last weekend, one of the things we definitely have to work on is raising our level at the right moments to help us push forward and come through.”

The Crimson looks to continue its winning streak as it faces off with top players from schools around the region. The three players who qualified for the ITA Northeast Super Regional will travel to Princeton, N.J., on Oct. 15.