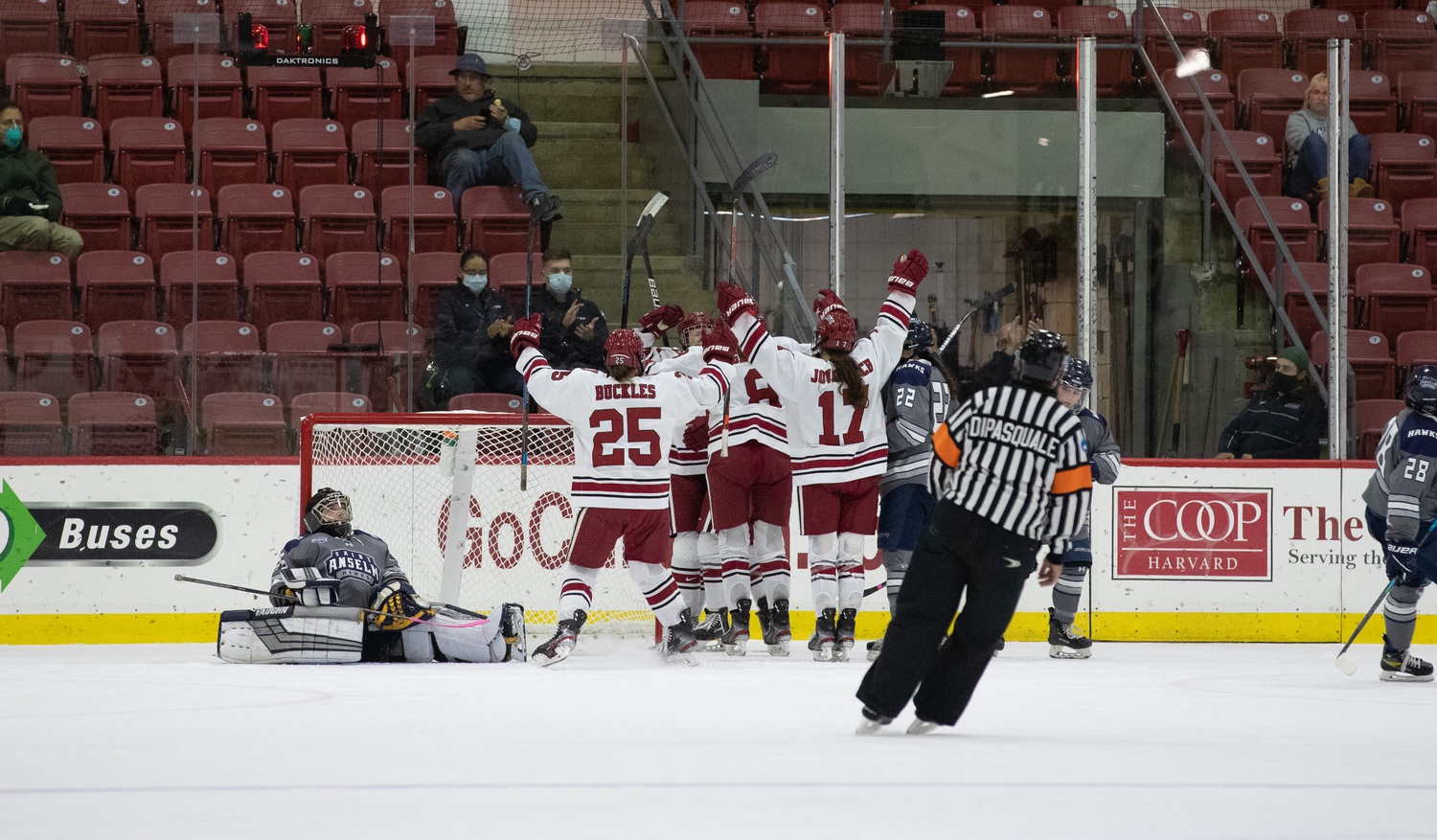 Harvard women's hockey celebrates a goal in a 6-2 win in October vs. St. Anselm. The Crimson had plenty of reason to celebrate again on Tuesday, skating to a 5-2 win over No. 7 Boston College. By Angela Dela Cruz
By Aaron B. Shuchman, Contributing Writer

Coming off of a difficult overtime loss to Clarkson on Saturday, the Harvard women’s ice hockey team bounced back with a dominant 5-2 victory over Boston College on Tuesday night at the Bright-Landry Hockey Center.

“We possessed the puck really well, we maintained control of the offensive zone quite a bit tonight, and I thought our defense played really well in transition,” said Harvard head coach Katey Stone of the win over BC. “All the way around, I thought we played pretty well.”

The game started very slowly, with both teams struggling to generate shots and maintain consistent offensive zone pressure. The Crimson was felled early by a checking penalty on first-year left wing Paige Lester and some sloppy defensive zone play, including several turnovers leading to Boston College scoring chances. However, Harvard’s top line of junior Anne Bloomer, junior Kristin Della Rovere, and senior Becca Gilmore was able to start generating offense halfway through the first period, culminating in a goal by Bloomer with just one second remaining in the first frame. The junior scored off of a deflection on a shot by first-year defender Mia Biotti.

“Anything with under two minutes at the end of the period is pretty significant, and that gave us a good jump in our step,” Stone said.

Despite the late goal, the Crimson started the second period on its heels, with the Eagles able to maintain consistent offensive zone pressure. BC forward Abby Newhook scored the Eagles’ first goal of the game on a rebound in front of the net, knotting the game at one. Harvard responded minutes later, however, on a power-play goal by junior defender Maryna MacDonald, who buried a wrist shot from the top of the faceoff circle. The Crimson’s top line — which consists of Bloomer, Della Rovere, and Gilmore, who also make up part of the top power play unit — posted seven points on the night.

“I think we have 10 great players on both power plays, so we don’t try to hone in on one thing and be robotic out there. We have a one-man advantage, and we just try to see the plays on the table,” Gilmore said.

The Crimson added another strike from Gilmore with three minutes left in the second period and appeared poised to take a 3-1 lead back to the dressing room at intermission, but the Eagles scored on a slap shot from the point by defender Alexie Guay with one second remaining in the period. The play was reviewed for goaltender interference, but the goal was upheld. 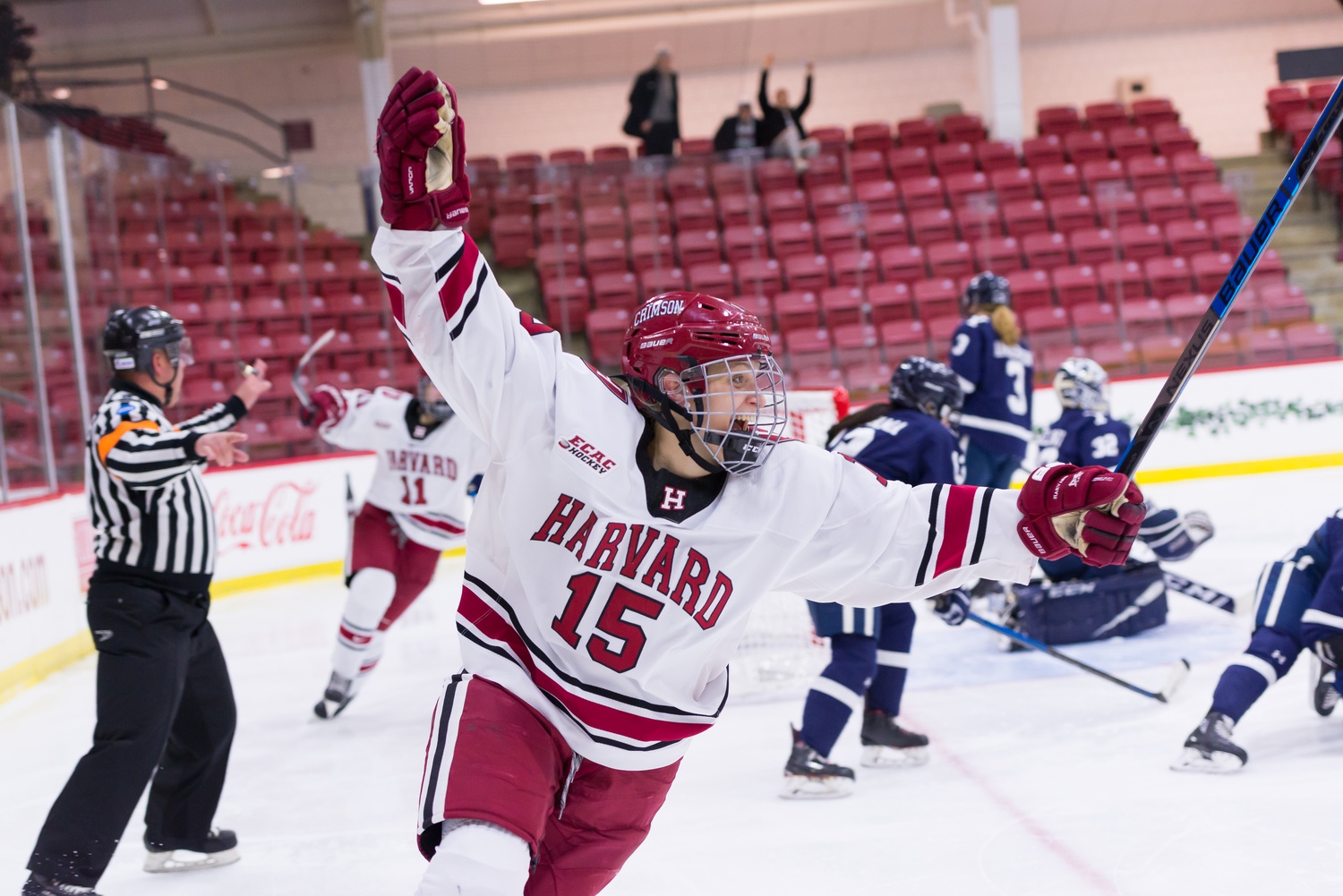 Senior forward Becca Gilmore, pictured above in 2020 after scoring a 3OT game winner against Yale in the ECAC Quarterfinals, added two goals and one assist in Tuesday's 5-2 victory over Boston College. By Courtesy of Ben Vreeland
Advertisement

“We kind of let them back in in the second half of the second period,” Stone said. “BC is good, and they put a ton of pressure on you, and sometimes it comes down to making the simple play versus the fancy play.”

Despite the late second period tally by the Eagles, Harvard came out roaring in the third, outshooting BC 15-3 over the final frame. Gilmore added her second goal of the game on a backdoor tap-in on the power play, and senior forward Dominique Petrie sealed the win with a goal on a 2-on-0 breakaway.

“I think we're always smiling, and we make mistakes and practice, but we're there for each other to support each other and talk through it on the bench,” Gilmore said.

Both Stone and Gilmore lauded the team’s chemistry despite the year off due to Covid-19, pointing out that many of the team’s players have played together before prior to coming to Harvard. Gilmore praised the team’s first-year players for the energy and chemistry they have brought this year.

“All of them play a big role on this team, and they bring so much energy to the bench,” Gilmore said. “They go out there and we trust them and they know what to do.”

Despite the year off, the team’s energy, chemistry, and level of play has Stone confident that this year could be a big year for the program.

“I think they just love it. They're so fired up to be back,” Stone said.