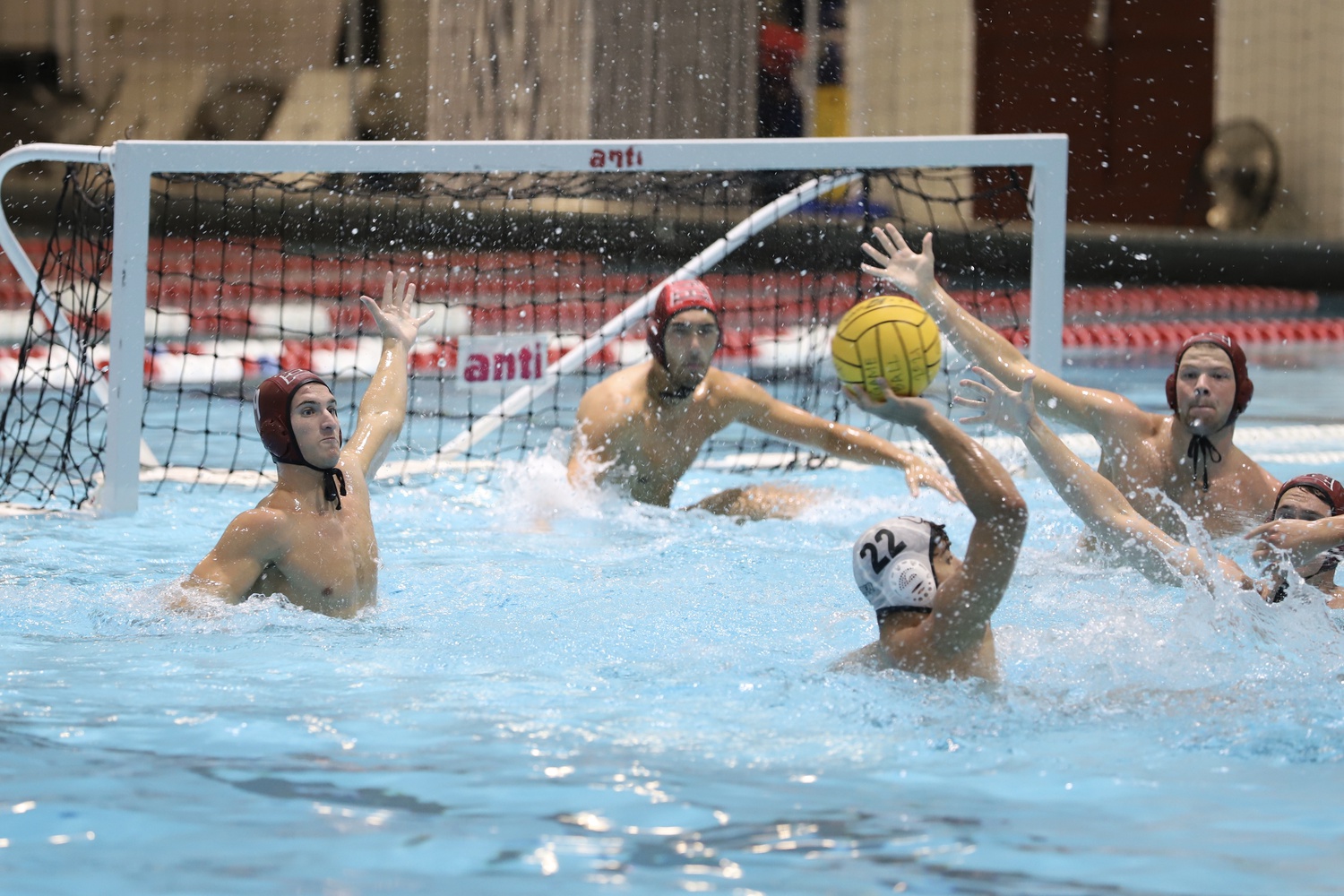 The Harvard defense swarms a Wagner attacker in a matchup earlier this season. By Josie W. Chen
By Oscar E. Mercado, Contributing Writer

“We did a very good job taking away what their strengths are,” said Harvard coach Ted Minnis when asked about what made the difference in the Brown contest. “We were able to move around the ball which made the defense work and put them in bad positions.”

The team travelled across town for its first challenge, against MIT. Harvard got out to an early 7-3 lead after the first quarter, thanks to two goals apiece from sophomore forwards Owen Hale and Mot Stothart.

The duo continued its attack, netting four goals each in the match to lead the Crimson to victory. Junior forward Michael Sonsini dished out five assists, and Hodge added nine saves during Harvard’s victory. With its victory, Harvard swept the season series against MIT.

The team found further success when it returned to Blodgett Pool for its final home game of the season against Connecticut College.

“I’m so happy for Del on getting that hat trick,” Minnis said. “He was the difference maker in that game.”

Finally, the team traveled to Providence to meet nationally-ranked Brown. Despite the squad committing plenty of penalties to give the Bears power-play opportunities, Harvard again built an early lead against its Ivy League rival. Junior forward Gabe Putnam opened the scoring for the Crimson in the first period. In total, six different players scored in the first period, with sophomore forward Kaleb Archer netting the final point for the team in the first frame to give the Crimson a 6-2 lead.

“Our man-down defense has been a huge point of emphasis this entire year,” Hodge said. “Communicating effectively has definitely been a huge part of why we are so successful on defense — we’re all on the same page.”

Hodge led the way defensively in the contest, contributing 12 saves and an assist. The team vigorously pushed the pace in transition all game which began to wear down the Bears. Thanks to this game plan, and its strong defensive performance, Harvard never relinquished its early lead. Putnam, Archer, Sonsini, and junior co-captain Alex Tsotadze rounded out a balanced offensive effort, with each netting a hat trick in the 17-11 victory.

With the latest victory over Brown, Harvard swept the season series against the Bears. It marked the fifth consecutive win for the Crimson and the fourth time in program history that the team reached 25 regular season wins.

Harvard will face Connecticut College in the first round of the Northeast Water Polo Conference playoffs on Nov. 19 in Princeton, N.J.