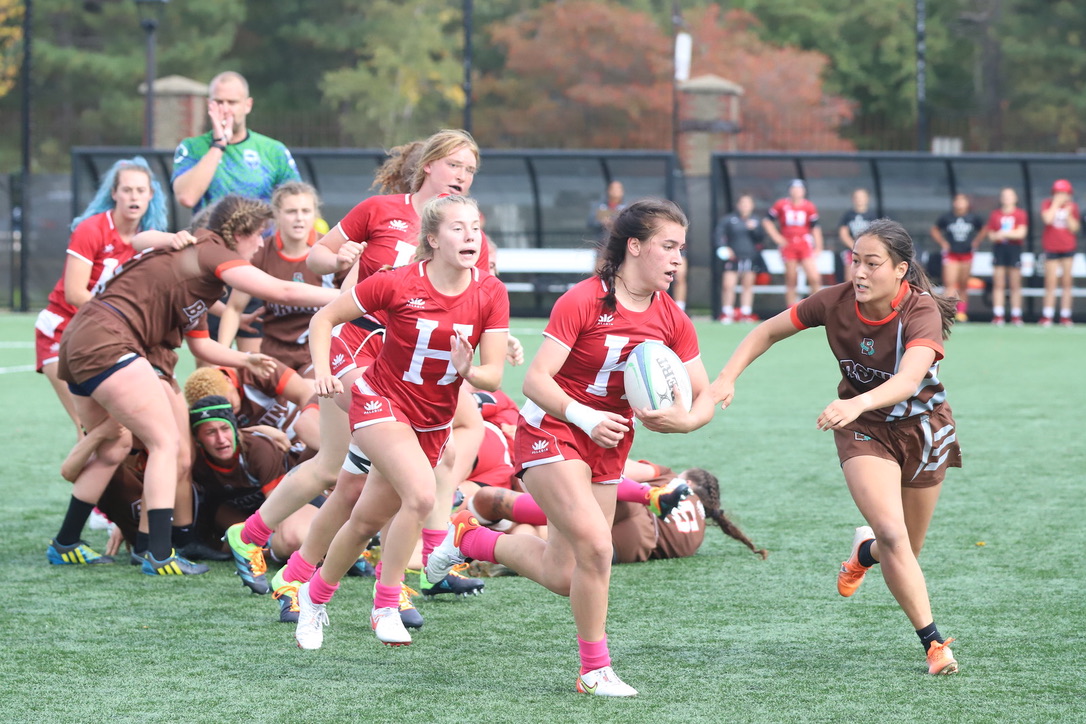 Harvard women's rugby ended its impressive 2021 fall season losing to Army in the 2021 NIRA National Semifinals. Although the team is devastated its season has come to a close, the program remains optimistic for the future. By Owen A. Berger
By Lucy Connor and Elizabeth Pachus, Crimson Staff Writers

The No. 2 Harvard women’s rugby team (6-2, 6-1 NIRA) was unable to hold off No. 3 Army (7-2, 4-2 NIRA) in the 2021 National Intercollegiate Rugby Association National Semifinals, drawing its 15s season to a close. West Point returned hungry for vengeance after its recent loss to Harvard in the regular season, and the Crimson’s hope of defending its 2019 NIRA Championship title was ended on Saturday, Nov. 13th at Mignone Field with a final score of 25-17.

“The whole theme of the week was we're not building anymore, we're just polishing,” said senior prop/lock Erica Jarrell on the team’s mindset before the game. “We’ll go into Saturday, just playing our game and doing the things that we do well, well.”

Senior Michelle Groth opened up scoring for the Crimson with a deft sidestep to tie the game five-all 14 minutes into the first half. Followed by a successful conversion, Harvard took its first lead of the game at a score of 7-5.

“There were some points where we had really great momentum,” said junior prop Michelle Groth. “We were able to really link passes together, which ultimately led to our second try.”

Both teams flexed their defensive prowess to produce a low-scoring and evenly matched game, with a majority of play occurring in the center of the field as neither team backed down.

Entering the second half with Army in the lead by a score of 15-14, the game maintained the back-and-forth intensity. All Harvard attempts to regain the lead were quickly met with an Army response.

Brogan Mior’s successful penalty kick with 10 minutes remaining narrowed the contest to a three-point game, with Harvard still trailing 17-20. But the Crimson’s hopes to edge out West Point were dashed when Army wingback Emma Richards-Smith returned with a try. Though Harvard never took the pedal off the gas, time ran out, ending their season in a 25-17 loss.

The Crimson closed out their fall season with an overall record of 6-2 and an impressive 4-1 home record. This defeat also marked the end to an impressive 13-game winning streak on Mignone Field, which dates back to Oct 7th, 2017.

Senior wing Emma Kearney and first-year flyhalf/fullback PK Vincze led the team in tries this season, each notching a total of nine. First-year fullback Chloe Headland and sophomore flyhalf Brogan Mior led the team in conversions, coming in at 18 and 11, respectively.

This was the fourth consecutive NIRA Semifinals for the Crimson under head coach Mel Dunham.

“[The coaches] take a really holistic approach to coaching. They really support us — as students and as athletes and as people — and that really helps us to perform our best, both athletically and academically,” said Groth. “Coach Mel really wants to teach us how to analyze and exploit the space in our game, so we can have really high rugby IQ, and we can all be good decision makers.”

The team has improved and established itself as one of the top rugby contenders over the past couple years.

“I'm just really grateful that I got to be a part of it. I think I was very lucky to come in during a growth period so that I could grow with the team,” said Jarrell. “I'm really grateful that I had that opportunity. I'm proud to be leaving it in such a dominant place. Harvard is expected to do great things in rugby for the next few years.”

After four years on the team, Jarrell will graduate this December and hopes to continue playing rugby in her future.

No. 1 Dartmouth will face No. 3 Army for the Division I NIRA National Championship game on Saturday, Nov. 20th at 7:00 p.m. at Army West Point Athletics Anderson Rugby Complex.