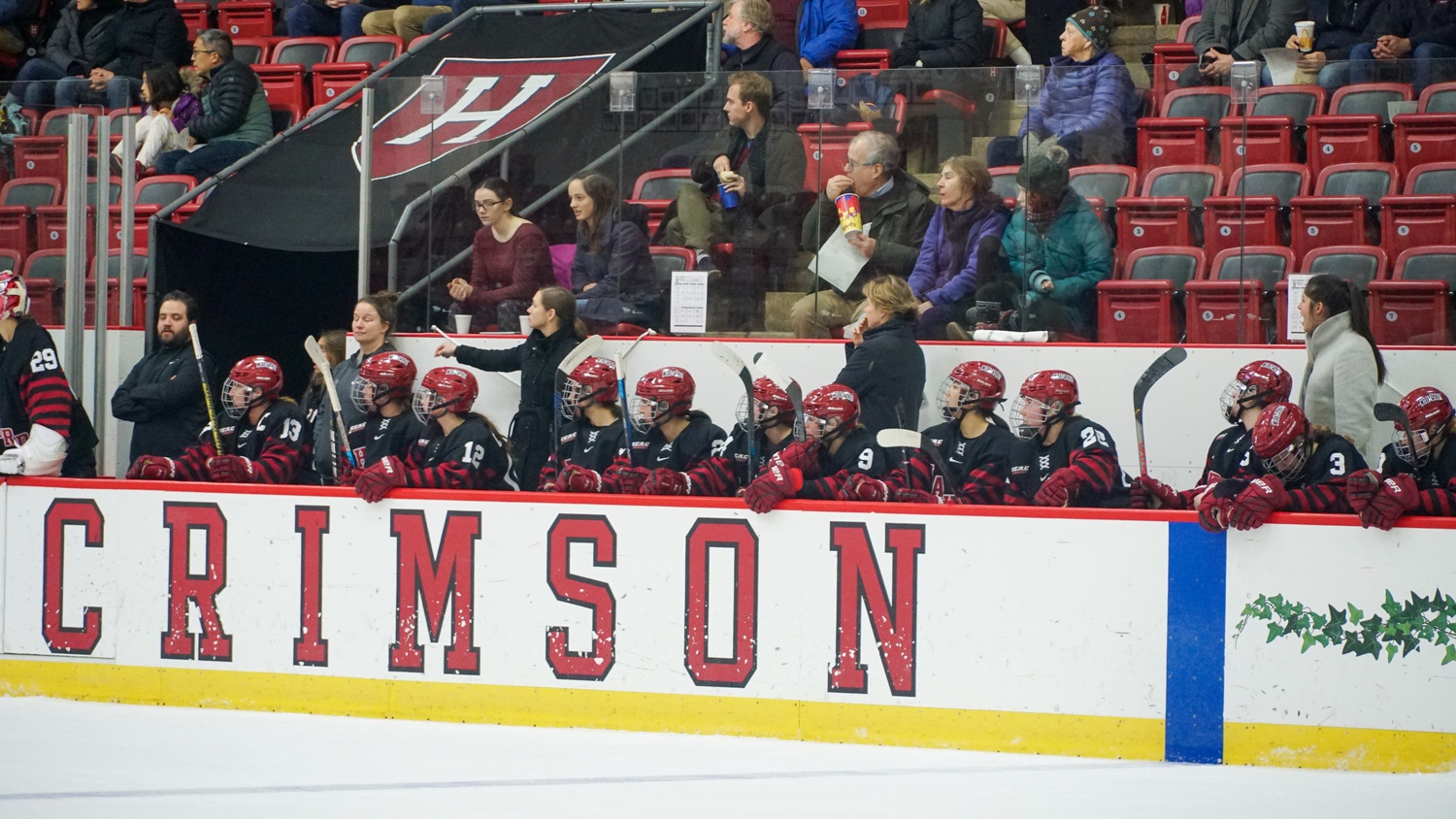 Head coach Katey Stone and her staff preside over the bench in a game against Dartmouth in the 2019-20 campaign, which brought Stone's career to 494 wins. With a 6-3 record so far this season, Stone has clinched her 500th career win, becoming the first female head coach to do so. By Zadoc I. N. Gee
By Shahmir Aziz, Contributing Writer

On Saturday, she added another: Her 500th career win — a triumphant 5-2 victory over Brown.

This win, which came after a tough two-goal loss to Yale a day earlier, brought the Crimson’s record to 6-3 (4-3 ECAC). While Harvard dropped out of the national top ten, the Crimson did receive votes in the polls to stay right on the doorstep of the national rankings.

Friday’s game against Yale marked the Crimson’s first regulation loss of the season. Harvard junior forward Anne Bloomer was the only player who scored for the Crimson, which fell, 3-1, on the road to the Bulldogs. Bloomer, whose second-period goal marked the fourth straight game in which she has scored, has been one of the standout performers for Harvard this season, with six goals and four assists — the second-most points on the team.

“I’m pleased with both my individual performance as well as the team’s performance,” Bloomer said. “We have a large roster this season with a lot of depth and plenty of great players, which makes it easy for the team to perform better and score more goals, and this is something we didn’t have the luxury of in the previous years.”

“It’s been a lot of fun and encourages everyone to compete and get the most out of one another,” she added.

Harvard returned to its winning ways the next day in Providence, R.I., where Stone achieved her 500th career victory.

“It’s just good to get through these things,” Stone said of her milestone. “The way I look at it, it’s all about the players and all the support staff helping along the way, and it’s just nice to get through some of this stuff.”

Stone was also named a recipient of USA Hockey’s Distinguished Achievement Award over the summer, which recognizes a person who has made outstanding contributions, on or off the ice, to the sport being the first woman to receive the award. Stone, who has led Harvard for the last 27 years, is also the first female head coach to reach the 500-win milestone. Adding further to her resume, Stone has coached six Patty Kazmaier Award winners, 13 Olympians, and 11 NWHL Draft picks over her tenure.

“There really is no coach more deserving of this milestone. She’s been a trailblazer for not just female coaches, but all coaches and athletes in the NCAA,” senior forward Becca Gilmore said. “Her numbers just show the amount of success she’s had, and it’s great to be able to celebrate with her, but there’s definitely a lot of players that came before us that made this happen, and many will come after us too.”

The Crimson won comfortably over Brown on Saturday, scoring three third-period goals to put the game out of the Bears’ reach. The victory marked Harvard’s 39th win in its last 40 encounters with the Bears. Bloomer extended her goal-scoring streak to five games, leveling her goals scored with Gilmore, the highest goal and points scorer, who has amassed six goals and five assists this season in nine games thus far.

“After 18 months, I know myself and the rest of the squad were very excited and energetic to get back on the ice, which translated to a very fast start, just having fun out there and formulating itself into a great start. We play best when we’re enjoying ourselves,” said Gilmore of the squad’s morale and energy. “For me personally, I’m super happy with how the season has gone, and it has a lot to do with the linemates I play with — we’ve been playing together for some years now and have cultivated a great chemistry between us.”

It was always going to be a tough ask for the team to come together after such a long hiatus, to gel together as a team and perform on the ice right off the bat. However, the team has answered these questions with six emphatic victories thus far, playing complementary hockey on both the offensive and defensive sides of the ice.

“I think we’ve done pretty well so far. We’ve had a couple of tough overtime losses, but we’ve also bounced back. We've got fight to our game and some great depth. We just need to be prepared for every game, no matter who we’re playing or where, or which position we’re in,” Stone said of Harvard’s season. When asked about her goals and aims for the rest of the 2021-22 campaign, Stone’s response was short and enthusiastic: “Win everything.”

With only three losses — two of which came in OT — the players are looking forward to a competitive and ambitious rest of the season. Wins against ranked opponents, such as No. 9/9 Cornell and No. 7/7 Boston College, show the Crimson’s current form, as Harvard looks ahead to the rest of the season, looking out especially for the Beanpot and, of course, the playoffs.

“We obviously want to keep winning games, and important games especially. We need to make sure we value every game in the season, and when playoff time comes around, we want to be situated in the best spot that we possibly can, and ultimately of course our goal is to win the championship,” said Bloomer about the team’s objectives going forward. “We also haven’t claimed the Beanpot title in a while, and it’s something we’re looking forward to.”

Harvard will look to continue the momentum from Stone’s 500th victory when it faces off against the University of New Hampshire on Nov. 23, after which it will enjoy a short break before playing Union College and Rensselaer Polytechnic Institute on consecutive days.