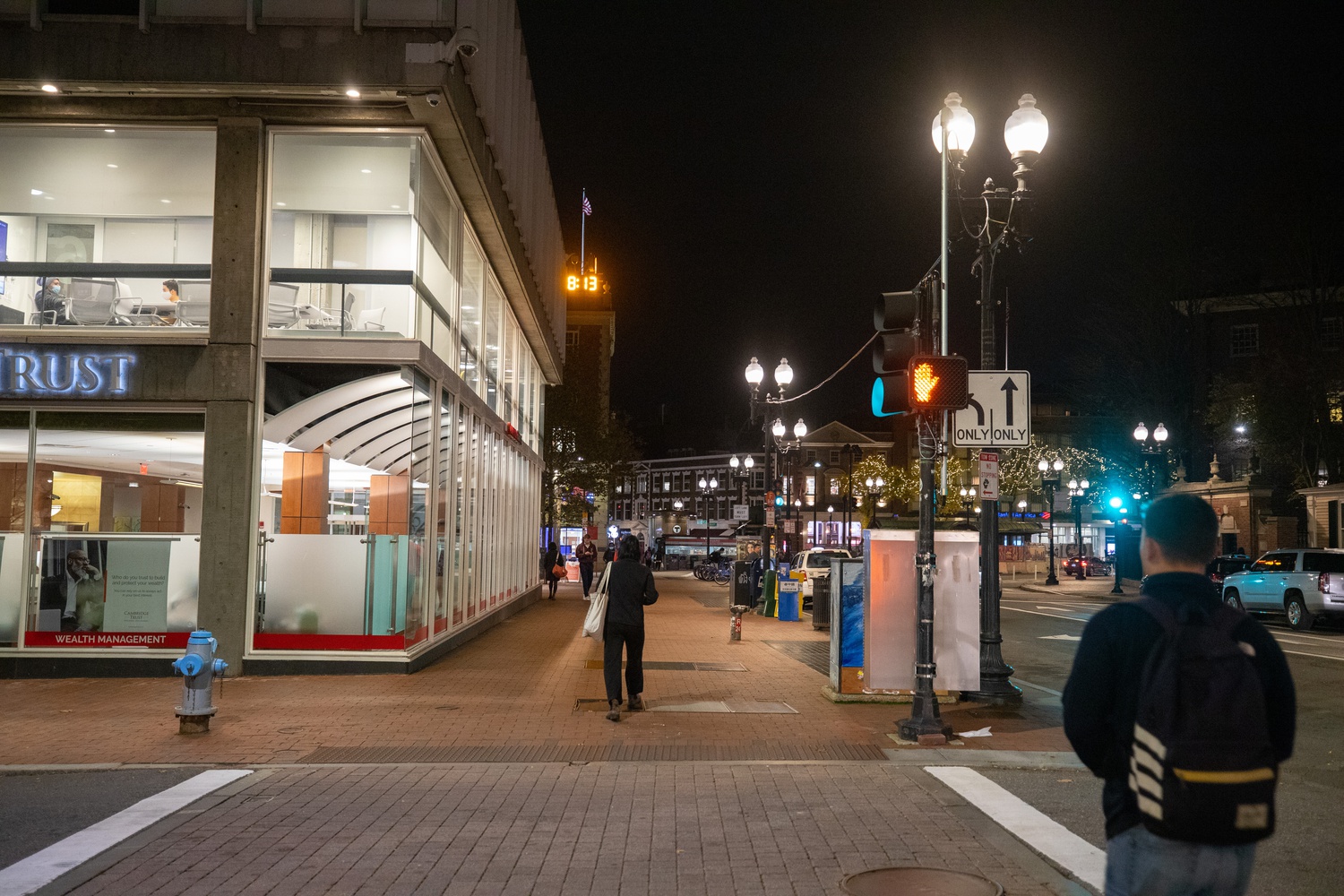 I’m not prone to frequent all-nighters. In fact, I’m more prone to falling asleep as soon as the movie starts. But I wanted to write an article about staying up all night, and there’s only one way to do that.
By Maya M. F. Wilson

I’m not prone to frequent all-nighters. In fact, I’m more prone to falling asleep as soon as the movie starts. But I wanted to write an article about staying up all night, and there’s only one way to do that.

The mythos of Harvard gets suspended after dark. The sun is no longer glittering on the Yard like it’s cast in gold, and the hordes of tourists head for home. We take a collective sigh of relief.

During the day, we fold our time into tiny little boxes that we can arrange on our computer screens. Personally, I refuse to entertain a Google calendar, but that stubbornness doesn’t stop my time from being fragmented, poked, and prodded. And I certainly still miss my fair share of meetings.

But at night, we get our time back. We get parts of ourselves back. At least I think we do. What do we actually do when we’re supposed to be sleeping?

That’s what I wanted to figure out. I knew Harvard nightlife had to be more varied than it’s made out to be, and by nightlife I don’t just mean parties. I’m talking about the life of the night.

My plan was simple. Embark at midnight. See who I could find and see what they would tell me about their nighttime thoughts, feelings, and doings. I had no route in mind. I had vague aspirations to see the sunrise. Carrying some chocolate, a brand new notebook, a mechanical pencil, whatever other shit was already in my tote bag, and my phone with 16 percent battery, I set out.

It’s midnight outside Kirkland, and Thursday just became Friday. Walking up Dunster Street, there are still too many people out to count. People are coming home on scooters, heading out in cars, walking alone or in clusters and pairs.

I wonder how many people around me are already sleeping soundly. Bumping into my friend Chris, he tells me, “I like everywhere more at night.”

The Fly is playing “We Are the Champions” and, I’m sorry, I have to chuckle.

A man in a tuxedo emerges and leans against a pole to fiddle with his foot. “Was there something in your shoe?” I ask him as he walks by. “Just a little pebble,” he says. I ask why he didn’t want to bring it on his adventure with him, but I can’t make out his reply.

It’s 12:48 a.m. outside Jefe’s, and there’s still too many people to count between here and The Fox. The last cigarettes are being smoked before people start to disperse and I steal a few drags. They’re as sleepy as they are friendly and I can imagine they’re all about ready to get out of that stuffy attire. Their night ends as mine begins.

Now it’s 1 a.m. A kid outside Wigglesworth wants to know where DeWolfe is so I offer to walk him over there. He tells me the night lets you focus on yourself. “These are the experiences that form you, not the walk to Annenberg. It’s the crazy experiences that make you a Harvard man,” he says.

He’s on his way to a Grindr hook-up. This is his first time seeing this person. I asked him if he feels like Harvard is a comfortable place to be queer and he tells me that he has five straight roommates and has never once felt ostracized because of his sexuality. One time, they even chanted him off, saying “Go get some dick,” on his way to meet a potential hook-up.

Half an hour later, I’m sitting on a bench outside the Lampoon with a man named James. Another man, also named James, sprints by us, and it seems preposterous to me that someone could have somewhere so urgent to be at approaching 2 a.m. on a Friday morning. “Where are you going in such a rush?” I yell after him. He stops and makes his way back to us. “You know when you’re drunk and you’ve just got to go?” James asks, and James nods. “You acknowledge the inefficiency of walking when you’re drunk,” James says to James.

A man walks by our James sandwich carrying a 12-pack of Celsius and offers us one, which I gladly accept on behalf of the group.

At 1:37 a.m., four men run by holding a statue in two pieces. As if a magician had sawed it in half, one person carries the legs and another carries the torso. James and James concur: Delphic initiates.

“I need to go pass out, and then write my thesis,” James says as he departs. He offers me a pack of Marlboro Reds with 3 cigarettes left. I’m glad to accept. I don’t have a lighter but I don’t think that’s to my detriment. I’m a forager tonight.

It’s becoming increasingly apparent to me that no matter the time, people still have somewhere to be. But it does seem like people are a little more generous of heart here in the wee hours.

At just after 2 a.m., I head to Widener. Pairs of freshmen walk from one dorm to another and the air is ripe with the sounds of Taylor Swift listening parties on the eve of her re-release.

Sitting atop the steps are two people who tell me that at night, their thoughts go Big Picture. They like to sit up there for the vantage point, good for stargazing. “We saw a shooting star last week,” they tell me. I ask them what they wished for: “To create a happy family,” says one. “You stole mine!” exclaims his friend. “I want to raise good kids.”

Then she points. “I like sitting here because you see stuff like that.” Across the steps, two people are busy being passionate, wrapped in each other’s arms and making out intensely. Mmm. A kiss like that would be nice right about now.

Stepping into Lamont brings me into a new phase of the night. It’s largely deserted. The security guard tells me he has to listen to music to stay awake. Rows and rows of empty cubicles make me feel like maybe we shouldn’t have libraries open 24 hours.

On the first floor, all I find are four discarded masks and two Kit Kats. In the basement, I find a pair of roommates, one working on an op-ed for The Crimson and one working on an Econ problem set. They’re sharing guacamole from Annenberg and they describe their relationship as wonderful. If they’re at Lamont, it’s usually at these hours.

I stop by the second floor to pee and charge my phone a little. God, I want to tap out. I keep sipping my Celsius but it makes my tummy hurt. Twenty-five minutes in Lamont feels like an eternity. Most people pull all-nighters to get something done that cannot be put off. But I don’t have anything strictly to do, apart from staying awake, so my awareness of my solitude grows.

It occurs to me at this point that I might be alone for the rest of the night, and I don’t think I want that. There’s so many people on this campus and here I am, alone in Lamont, on a Thursday night. In an effort to crowdsource company, I post on my Instagram story asking people to call me if they’re awake. No one calls.

A Securitas worker standing outside the gate asks me to bum a cigarette. The hours ahead are too present in my mind. It’s hard to admit that, reluctantly, I said no.

It’s now pushing 4 a.m. This is the moment when the world feels really empty, with the birds starting to chirp, faint and infrequent. I stand in the middle of the otherwise vacant street and watch a truck approach me slowly. The driver rolls down his window. “What are you doing?” he asks me. I can’t tell if he’s being creepy or just curious. Moving out of his way, I decide to head to the one place where you can be absolutely sure to find a waking human at all hours.

The late weeknight hours at the radio station, WHRB, is the Record Hospital, the underground music department. They can only play songs with less than 10,000 streams. I walk in and meet my new friend Ryan Golemme ’23, playing a song called “Antimatter v Antimatter” by a band called DK3. Something about this feels deeply appropriate.

“I don’t mind the nighttime,” he tells me between announcing his track titles. We don’t know each other but that’s one of the things I love most about the station, there’s a pretty immediate sense of camaraderie. He tells me my questions don’t bother him at all. “The pace is slower and you don’t have to worry about avoiding people on the sidewalk. I don’t like to rush things. Sometimes to my detriment.”

I do love the sound of a CD coming out of the CD player as Ryan switches his tracks. In the daytime, he says, he listens to more intense music. But at night, he likes to listen to ambient sounds, and let his thoughts drift towards space and the stars. The science of thousands of degrees of burning gas in an endless cycle fascinates Ryan, and how much empty space there is between us and them. “We’ll probably never get there,” Ryan says matter-of-factly. “But at least we can look and see the light.” Later, I’m surprised to learn Ryan is an Economics concentrator.

On my walk away from the station, towards the river, the only person to talk to is a woman wiping down the tables outside Jefe’s. She speaks Portuguese. I ask her with Google Translate if she likes working the night shift, and she uses Google Translate to tell me yes. Her daughter is three and clearly consumes much of her days.

By this point, I want to kick myself for leaving the house without a lighter. I had faith I’d at least find one — lingering, discarded and lonely — along the Charles but the likelihood of that is dwindling. The pack James gave me is burning a hole in my pocket, three unsmoked cigarettes that clearly serve as karmic retribution for Securitas.

The breeze is strong close to the river and the shadows cast in front of me keep me looking behind myself for something stirring. But all I see are leaves moving. I like to sit on a bench between, so I can look at both bridges at the same time. Solitude is not loneliness but I can’t quite tease apart which one settles on my shoulders as I look out at the dark water.

Originally my goal was to last until the sunrise. The sky is not leaking light yet, but I feel myself extinguishing. At this point my body is running on Celsius and cigarettes. McDonald’s is open for five more minutes and I take that as a signal that I, too, should close for the night. My quarter pounder with cheese provides a different sort of company before I crawl, finally, into bed.

— Staff writer Maya M.F. Wilson can be reached at maya.wilson@thecrimson.com.