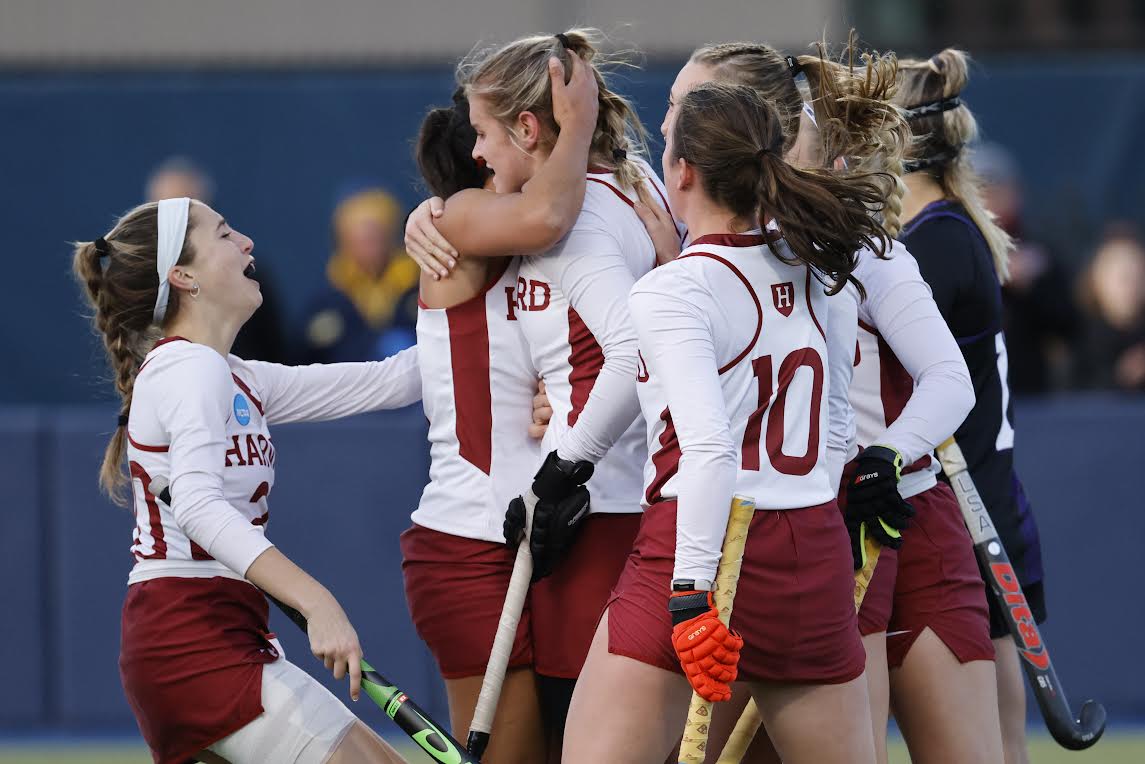 Harvard's season came to an end Friday, as it lost, 2-1, to Northwestern in the NCAA semifinals. By Courtesy of Rick Osentoski/University of Michigan
By Mairead B. Baker and Jasper G. Goodman, Crimson Staff Writers

The Harvard field hockey team’s Cinderella NCAA tournament run came to an end at the hands of Northwestern on Friday evening.

The No. 12 Crimson fell to No. 7 Northwestern, 2-1, in the national semifinals, ending a historic run that culminated in Harvard’s first-ever NCAA Final Four appearance. Harvard (17-2, 7-0 Ivy) finished the year with just two losses and a pair of upset NCAA Tournament victories that brought it within two games of a national title.

“It’s a heartbreaking end, but extremely proud of how this team persevered through the whole season,” said Harvard head coach Tjerk van Herwaardenafter the game.

Northwestern redshirt junior Bente Baekers was the hero Friday, scoring both of the Wildcats’ goals, including the game-winner less than three minutes into the first overtime on a direct shot off of a corner.

“They were able to find a way to get close to the circle — obviously great individual skill from Northwestern to get that corner,” van Herwaarden said. “A corner becomes a very difficult scenario and I think, in all fairness, they played a really good corner to get that goal.”

The head coach noted that the primary challenge Northwestern posed was its incredibly strong individual players. Whereas other teams they had faced in the tournament thus far had offered more of a team attack, the Wildcats banked on individual quality, a key component of their game-winning goal in overtime.

A standout for the Crimson, senior back and Ivy League Defensive Player of the Year Hannah Pearce spared no effort in a defensive attempt to prevent offensive powerhouse Baekers from scoring.

“It actually almost happened in slow motion,” Pearce said. “As I turned to kind of take the ball off the save of Ellie, I saw it go in.”

“Your heart drops for a second,” Pearce said. “But I’m incredibly proud of my team and everything that we’ve done.”

All three of Harvard’s tournament games lasted beyond regulation — a 1-0 win over No. 6 Louisville in OT, a 1-0 shootout victory versus No. 2 Michigan, and the 2-1 OT semifinal loss to the Wildcats on Friday.

“I think going into overtime, we’ve had the experience with it, so I think our team is quite comfortable and confident going in,” Pearce said. “Our game plan is usually just to keep the ball moving as fast as we can and kind of get them to do the off-ball work because obviously it’s a big field with only six players on each side.”

Pearce scored the lone Crimson goal in the game just over 10 minutes into the first quarter, which knotted the game at one. The contest remained tied for the next 52 minutes before Baekers scored to send Northwestern to the NCAA Championship.

“The past OT sessions had given us some confidence,” van Herwaarden said. “With Northwestern’s speed, you want to keep your lines closed — I think we did fantastic with that initially, able to find a way to get close to the circle.”

Though the Crimson was not able to stand the Northwestern Wildcats, this loss comes after an exhilarating ride to the Final Four contest. Harvard entered the first round of the NCAA tournament with the momentum gained following its Ivy League championship.

“Our mindset coming in was to play the game that we love,” Pearce said. “We just came in wanting to play a good, simple game of hockey.”

Despite the outcome of the semifinal game, the Crimson’s remarkable run to the Final Four emerged from the team’s return to competition after a 21-month hiatus due to Ivy League Covid-19 restrictions.

“To end it this way is painful, but I’m very proud of how the team did,” van Herwaarden reflected. “We did not expect this at the beginning of the season.”

This year, Harvard field hockey had to acquaint both first-year and sophomore classes to the program, who had yet to play an official game as a member of Harvard’s team.

“I think [the hiatus] created a very different scenario,” the head coach remarked. “You start a season after being such a long time away from it — we had to find each other, and I think it took a few weeks to do that. I think recently we realized, ‘Hey we’ve got something here.’”

This unforgettable season for Harvard field hockey is marked by its making of program history: this 2021 team is the first ever to reach the Final Four matches of the NCAA tournament. The 2021 group beat the previous record of reaching the quarterfinals in 2018.

“Coming into this game, obviously we made program history, so I think we were just extremely excited and proud to go out onto the field and represent the name on our shirts,” Pearce said.

No. 7 Northwestern (18-5, 5-3 Big Ten) also made history for its school in the Sunday afternoon matchup with No. 9 Liberty (20-3, 7-0 Big East) for the national title. The Wildcats topped the Flames, 2-0. This is the first national title for Northwestern’s field hockey program and is the university’s first NCAA title since 2012.

Liberty had previously beaten St. Joseph’s in the first round of the tournament and took down No. 1 Rutgers in the quarter final round. The Flames then went on to overpower No. 5 Maryland in the semifinal game before their meeting with Northwestern in the final.