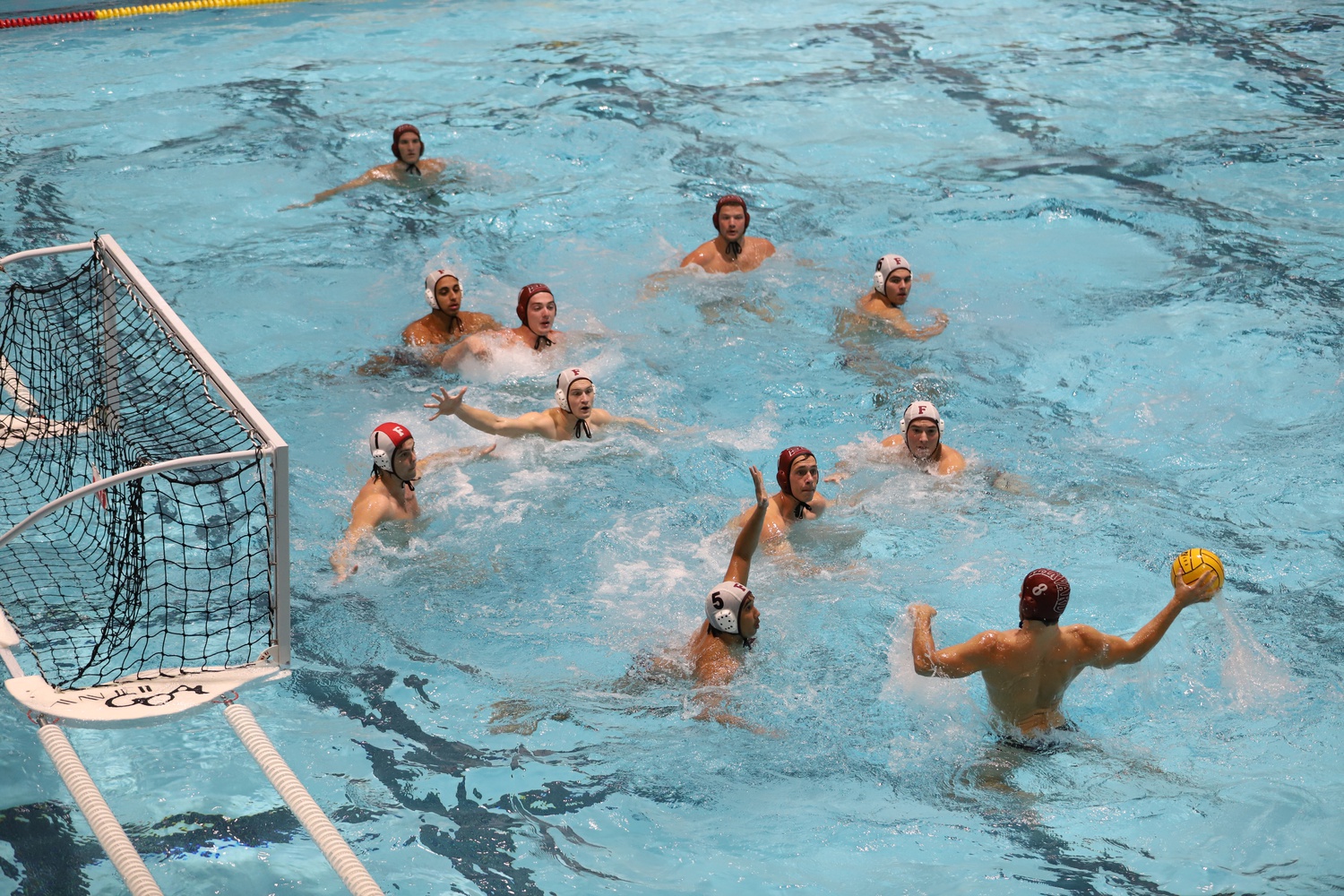 Harvard's 2021 campaign came to an end in the NWPC Playoffs at the hands of St. Francis College Brooklyn in the semifinals and Brown in the third-place match. By Owen A. Berger
By Oscar E. Mercado, Contributing Writer

The Harvard men’s water polo team rode a five-game winning streak to Princeton, N.J., for the Northeast Water Polo Conference playoffs on Nov. 19-21. The No. 2 Crimson (26-6, 9-2 NWPC) entered the playoffs poised to make a run at defending its 2019 crown after it was stripped of that opportunity by the pandemic last fall.

“It was a great season, and I am proud of my team and what we accomplished,” wrote Harvard head coach Ted Minnis in an email. “We did not achieve our ultimate goal, but we were able to compete this season, which is what we all wanted to do after this past year.”

Harvard’s quarterfinal matchup against Connecticut College marked the second contest of the season between the two teams. Led by freshman forward Andrej Basica’s early hat trick, the Crimson jumped to a 12-6 commanding lead after the first half and never looked back.

The Camels scored two points to open the second half before the Crimson began a 9-0 run to balloon its lead to 21-8. Basica and fellow first-year forward Alex James each netted four goals while junior goalie Nathan Wu contributed 14 saves. Harvard extended its win streak to six games with the victory.

“I think our energy was really high and everyone was clicking in the first game,” junior co-captain Alex Tsotadze said. “Unfortunately, we weren't able to carry that momentum through the weekend.”

Harvard’s momentum flamed out in its semifinal matchup against St. Francis. The game was even late in regulation until St. Francis sophomore defender Adonis Vlassis netted the game-winning goal with 42 seconds left to crush Harvard’s hopes of repeating.

The match was the third and most important installment of the season series between the two teams. Each team held a win over the other with Harvard earning the most recent win in the series, a 20-5 rout on Oct. 30.

The Terriers were on fire early, notching the first three goals of the game. After a quick timeout, Minnis rallied the Crimson, as first-year forward Tyler Zarcu scored the first goal for Harvard, beginning its own 3-0 run to claw back into the game. The Terriers scored the last goal of the first quarter with one second left to go up 4-3.

“Those first three goals weren’t the best of goals to give up,” junior co-captain Noah Hodge said. “After that timeout, we just took the time to take a deep breath and regroup and kind of recenter ourselves.”

The second quarter saw the same amount of scoring, giving the Terriers an 8-6 lead at halftime. In the third quarter, a defensive battle ensued, as the teams were held scoreless for nearly six minutes. Harvard sophomore center Mot Stothart broke the tension by netting a goal — only for the Terriers to quickly respond. Each team added another goal to get the score to 10-8 entering the final stanza.

Sophomore forward Owen Hale opened the scoring in the final period to cut the Terriers’ lead to one goal. After five minutes of scoreless action, sophomore forward Alexandru Bucur notched the equalizer with 1:58 remaining. Momentum was on Harvard’s side as an overtime period loomed, but the Crimson gave up the game-winning goal with 42 seconds left. Harvard’s ensuing offensive possession stalled as St. Francis became the only team to defeat the Crimson twice this season.

After its disappointing loss, Harvard faced a familiar foe — Brown — with the chance to earn a third-place finish. Harvard swept the regular season series against the Bears.

But the playoff matchup turned out to be a different story. Once again, Harvard was caught in a late stalemate against its playoff opponent. Harvard crumbled once more, as Brown’s junior forward Cole Atwell scored the game-winner with 27 seconds left to deliver a second straight heartbreaking playoff loss for the Crimson.

Harvard’s Basica opened the scoring by tallying the first two points of the game. Brown responded and led 8-6 entering the second half. Harvard scored five goals in the third quarter and Hodge added in a clutch penalty save to give the Crimson an 11-10 lead at the end of the third quarter.

Brown took a 13-12 lead halfway through the fourth quarter until Tsotadze scored the equalizer late. Another potential overtime loomed, but a critical expulsion of Harvard junior center defender Gabe Putnam gave the Bears a power play. Brown took full advantage and regained the lead with 27 seconds left. Once again, Harvard came away empty-handed in its final offensive possession, and then Brown added an insurance goal to win 15-13.

“It is definitely harder to play against a team that is really familiar with you,” Tsotadze said. “When you play water polo at the collegiate level, and especially in the playoffs, it all comes down to game-to-game adjustments. Both St. Francis and Brown were able to implement and execute at a high level.”

Even after the disappointing end to the season, team morale has remained high.

“In no way is it a failure of a season because we got fourth place in [the] playoffs,” Hodge said. “There are a ton of positives that came out of this season, and it just makes me excited for the next [season].”

Some of those positives included Tsotadze earning the NWPC Most Valuable Player Award and a spot on the all-conference first team. Hodge also earned a spot on the team — his third consecutive bid — along with Putnam.

The Crimson will look to reclaim its title next fall.