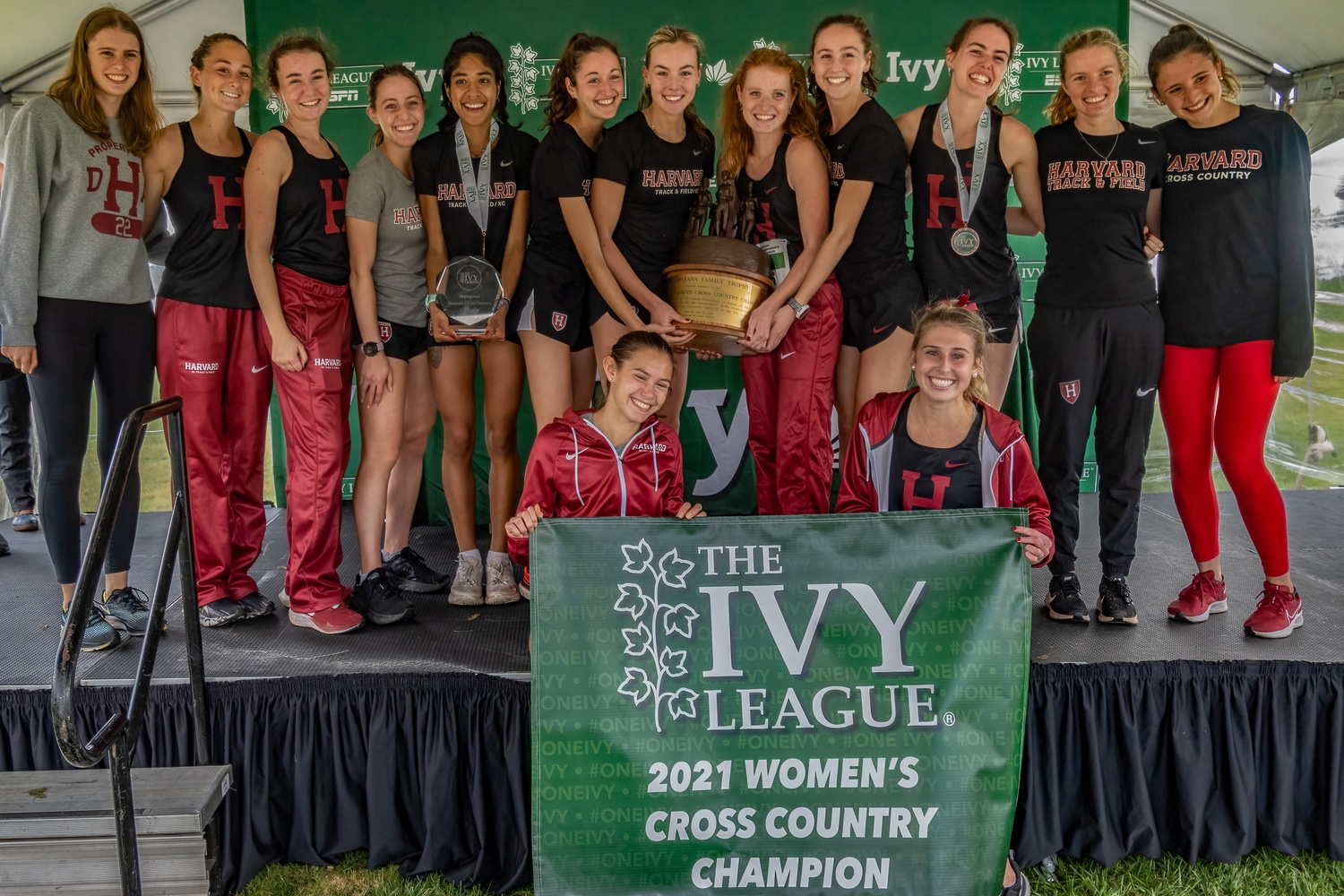 At Princeton’s home course in New Jersey, the Harvard women’s cross country team dominated its way to winning the Ivy League Heptagonal Championship for the first time since 2016. Two top-five finishers and five top-twelve finishers provided the Crimson women with the scoring depth necessary to capture the title. The Harvard men finished just behind Princeton in second, led by an exceptional performance by senior Matthew Pereira, who became the first Harvard individual champion since Kieran Tuntivate ’20 in 2018.

Coming into the race, the Crimson women were unranked nationally, falling to Yale in September in the HYP meet but beating all Ivy League opponents in the Coast-to-Coast Battle in Beantown and the Nuttycombe Invitational in October.

However, during the biggest competition of the year so far, the Harvard women showed up and ran a dominant race in the 6k course, putting up 37 points. Leading the Crimson was junior Isabell Sagar, who finished in third with a time of 20:32. Her incredible performance was a massive improvement on her 2019 mark as a first-year, when Sagar crossed the line in 20th. Following right behind Sagar was freshman standout Maia Ramsden, who continued her impressive debut season for the Crimson, crossing the line in fifth with a time of 20:44.

The middle pack of the Harvard team was sophomore Eloise Freitag, who finished in eighth with a time of 20:57, and senior co-captain and 2019 Heps third-place finisher Anna Juul, who finished half a second after Freitag in 9th. Rounding out the scoring five for the Crimson in 12th was fellow first-year Isabelle Goldstein who finished with a time of 21:04. The Harvard top five placing all within the top 12 spots of the race was important to the 37-point finish and will be crucial for regionals in two weeks. Starting strong and staying together amidst a field of 80-plus runners is a winning strategy for the Crimson going forward in the championship season.

“Our strategy heading into the race was to get out and stay out. We wanted to put ourselves in the front pack of the race from the very start and hold our positions there throughout the race,” commented senior co-captain Judy Pendergast on the team strategy. “The keys to the race were definitely working together as a group throughout the race. We’ve all been training really well together throughout the whole season, so it’s much easier to also find each other during these races and work together.”

Pendergast, an original member of the 2016 Ancient Eight championship team as a freshman and a scorer for the 2019 team that went to NCAA Nationals, knows what it takes to have a successful championship team. With the women having their best races of the season up and down the roster, the Crimson is peaking at the right time in preparation for regionals next week, where the team will attempt to qualify for nationals for the second season in a row.

“Heading into regionals, we are aiming to run a similar race,” Pendergast noted. “We want to get out and stay out, even in a larger field of runners. We are a ‘November team,’ meaning we are peaking during this time of year. So we are excited to see what we can do next week.”

Following the race, Sagar and Ramsden were named to the First-Team All-Ivy League, with Freitag, Juul, and Goldstein being named to the Second-Team All-Ivy League. Having all five scoring members as All-Ivy selections is a major achievement for the program and bodes well for the Crimson as the Harvard women look to be one of the deepest teams at regionals next week. 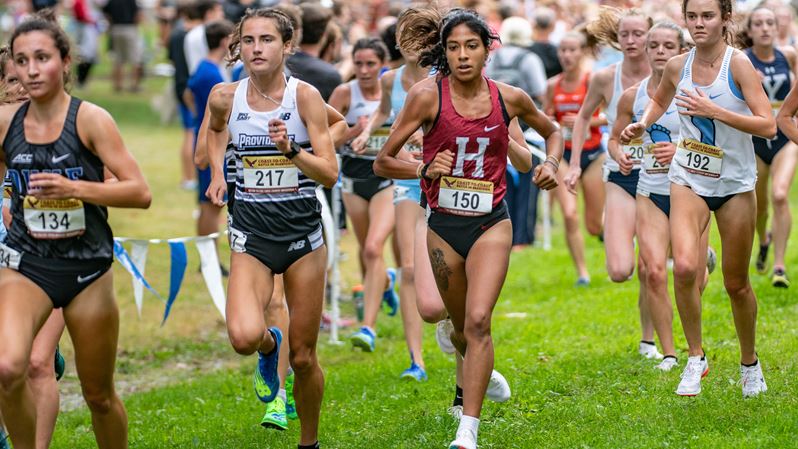 Junior Isabell Sagar, pictured above earlier in the season, finished third overall in the Ivy League Heptagonal Championship with a time of 20:31.8. Sagar's individual effort was one of many that helped power the Crimson women to 37 points and the team first-place finish. By Courtesy of Harvard Athletic Communications
Advertisement

For the Crimson men, they came into the race No. 25 in the national rankings, just behind No. 19 Princeton in the Ancient Eight. In a competitive bid for the Ivy League, the Harvard squad finished in second for the third year in a row with 43 points in the 8k race, behind the Tigers, who put up an impressive 23 points in the victory, but well ahead of Penn in third with 90 points.

The story for the Crimson was dominated by Pereira, who became the 12th Harvard runner to win the Ivy League in its 80-year history and the first since star runner, and former teammate, Kieran Tuntivate ’20 accomplished the same feat in 2018. Pereira, who was a consistent scorer for Harvard in 2019 and finished 12th at Heps two years ago, vaulted himself into Crimson history with his performance last weekend. Not only did Pereira win the meet, but he also set a course and a Harvard record with a time of 23:18 in the process, an incredible feat for the senior from Kildeer, Ill.

“I'd say there are three things that have helped,” said Pereira when asked about his improvement since 2019. “One is that I've had the benefit of training under Coach Gibby since my freshman year. He's a fantastic coach, especially for the purposes of long-term development, so the time component is a big factor. The second is consistently getting to train with such great teammates. We have a lot of really good runners on the team, which always makes workouts a fun challenge. The third thing has been in the races themselves, working together up front with Acer Iverson and Graham Blanks throughout all the races this season. Those two (along with Joe Ewing) deserve a lot of credit for the work they did leading the race and pushing the pace at Heps last weekend to break the field apart.” 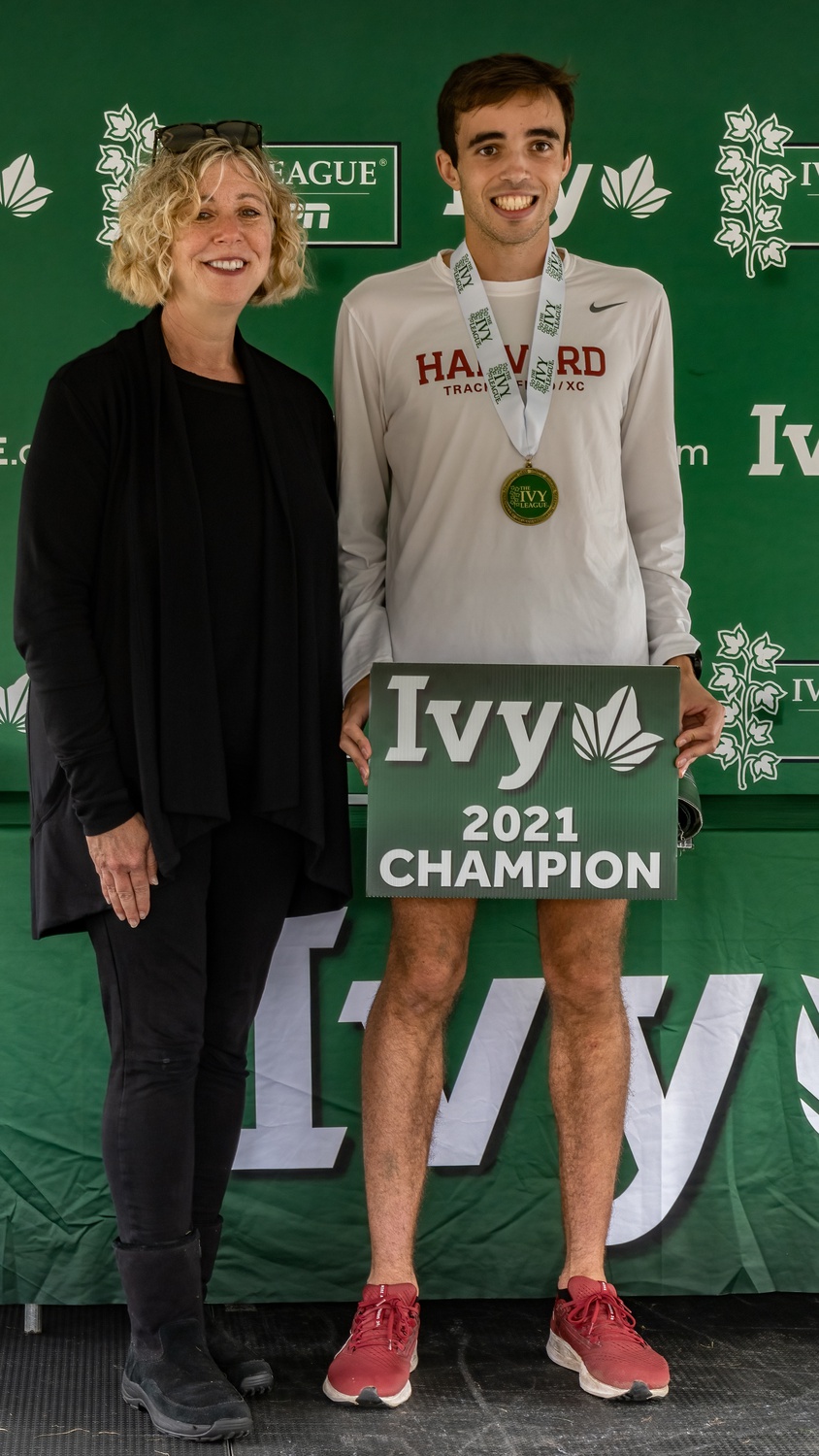 Just behind Pereira with very impressive races in their own right were sophomore Acer Iverson, who finished in fourth with a time of 23:42, and freshman standout Graham Blanks, who finished just behind in fifth with a time of 23:46. Blanks, who has been a consistent high-scorer for the Crimson men this year, was also the highest-placing first-year in the Ivy League. Rounding out the scoring for Harvard was sophomore Ben Hartvigsen, who finished in 15th with a time of 24:32, and senior co-captain David Melville, who finished in 18th with a time of 24:39. Despite this strong performance from the top five, it was simply not enough to break up the Princeton pack who took second, third, sixth, eighth, and ninth, respectively. If the Crimson can win at regionals next week, the team will get another shot at this Tigers squad at nationals in late November. Following the race, Pereira, Iverson, and Blanks were all awarded First-Team All-Ivy League selections.

“Our mindset heading into regionals is similar to what it was before Heps. We want to qualify for nationals, and we want to qualify with a win,” said senior co-captain Michael Alber on the team’s mindset going into next week. “I think regionals being 10k instead of 8k will also help us since we are more of an endurance-based program. Now we need to work on getting the rest of our varsity closer to our top three, and I’m confident we can do that.”

Pereira similarly commented on tightening up the top-five pack of runners for the Crimson.

“I think our general mindset is pretty similar to how we approached Heps. The best teams in the region, Syracuse and Iona, have really solid depth, so our best shot is to get our whole pack as close to their fifth runners as possible, and then try to beat them out on the front end. If we can execute both of those, we'll give ourselves a good chance of accomplishing what we want as a team.”

Head coach Alex Gibby was also awarded Coach of the Year for the Ancient Eight following the strong performances from both squads. Following Heps, both the Harvard women and men will be racing for a chance at nationals on Nov. 12 at Harvard’s pseudo-home course at Franklin Park. In 2019, both teams won and advanced to nationals in a historic moment for the program. Led by Gibby, the program will have a shot to do that again next week.