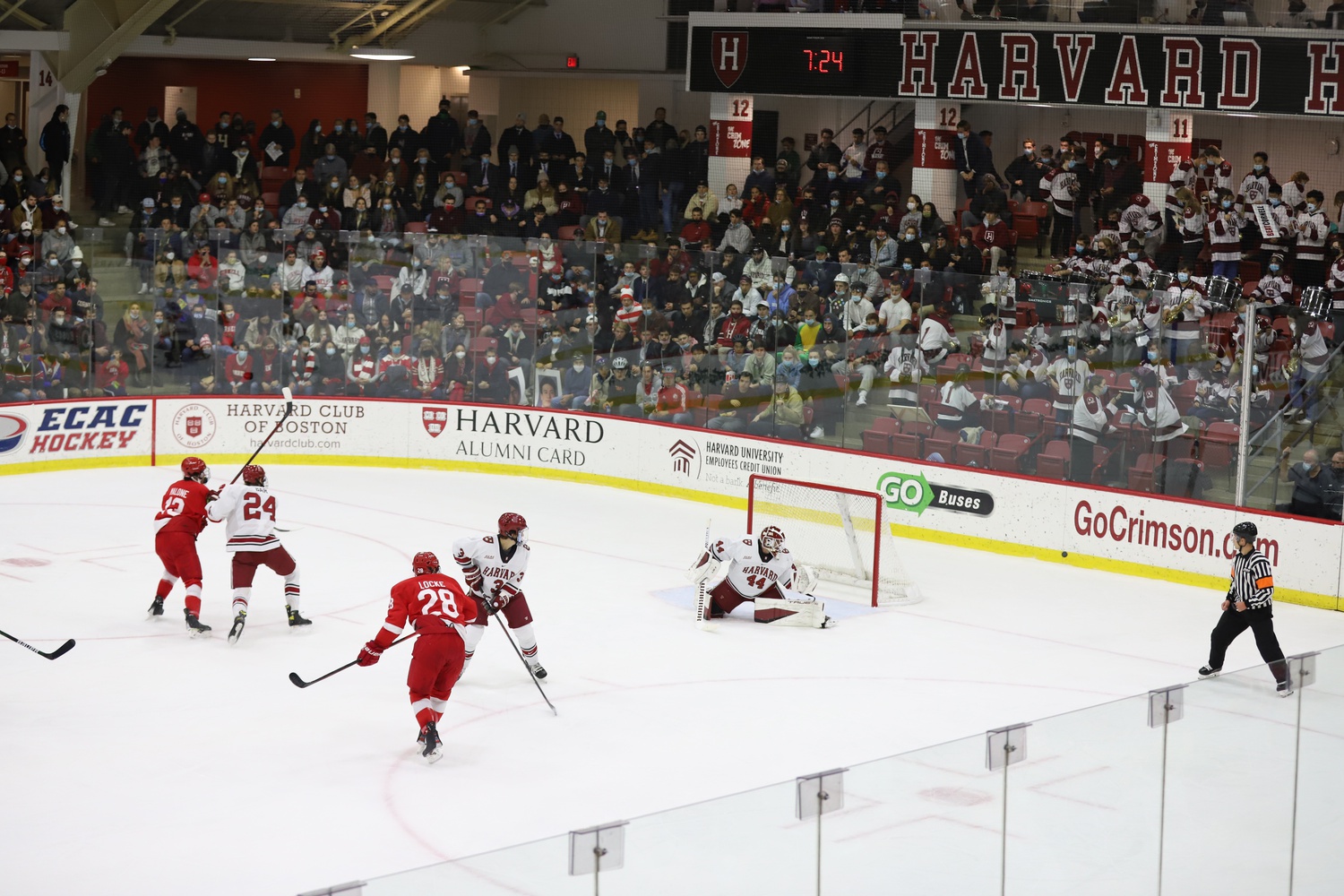 After falling behind 2-0 early, the No. 13/9 Harvard men’s hockey team rallied to score three unanswered goals and defeat No. 15/14 Cornell, 3-2, on Friday, marking the Crimson’s first home win over its archrival since 2016.

The win marked Harvard’s first victory over the Big Red in a conference game since January 2017.

In the final minute, with an extra attacker on the ice, Cornell mounted pressure and dominated possession but had not yet come too close to a game-tying goal. Then, with under 10 seconds left, a Big Red shot snuck through all the traffic and hit the post, coming right back out into the slot but near Crimson defenders, allowing Harvard to kill off the remaining seconds and earn the victory. As the final buzzer sounded, the Crimson bench cleared and swarmed junior goalie Mitchell Gibson right in front of a raucous student section that pressed itself against the glass to join in the celebration.

“That was a big one,” senior forward Casey Dornbach said. “Obviously, it's early. [We're] figuring some things out still [and] got some things to work on. But I think for many reasons, and the morale in the room ... [we're] proud of the group battling back. I think that was a huge start.”

The final minute was not the only tense stretch that the first Harvard-Cornell matchup in nearly two years had in store. With just over 15 minutes remaining in the third, an official review held the collective breath of Bright-Landry Hockey Center. Harvard (3-0, 2-0 ECAC) had potentially just broken a 2-2 tie with the Big Red ( 2-1, 0-1 ECAC) thanks to a power-play goal, but the net had come off just before the puck crossed the line. Sophomore forward Sean Farrell’s initial shot had beaten Cornell freshman goalie Joe Howe, but the puck hit the post, bounced back towards Howe, and caromed into the net off of Howe’s back. The net had begun to shift off its moorings, prompting the review, but had not come off far enough, upholding the Farrell strike and giving Harvard the 3-2 lead.

Junior goalie Mitchell Gibson provided the backbone the Crimson needed to keep the door shut for the rest of the game. By the night’s end, Gibson had racked up 36 saves. Ultimately, Cornell outshot Harvard, 38-22.

With the score locked at 2-2 in the second period, Gibson made a particularly crucial save. The Big Red had an opportunity to break the tie with its power play after senior defenseman Marshall Rifai went to the box for interference. On the five-on-four, Cornell teed up a one-timer off a cross-ice pass towards a seemingly open net, but Gibson pushed over for a highlight-reel glove save to keep the game deadlocked at two.

“They were having two one-timer options on the side on their power play,” Gibson said. “So they were looking to shoot, and I just knew I was a step behind and just had to reach there with whatever I could. I kind of reached back. And when I looked into my glove, it was there.”

Despite Cornell’s later significant advantage in shots on goal, Harvard opened the game with a couple of quick flurries in front of the net. The Crimson controlled the pace in the early going, holding the Big Red without a shot on goal for nearly the first 10 minutes of the contest.

Despite Cornell reclaiming the momentum near the midway mark of the first frame, the score did remain 0-0. With 4:12 to go in the first, however, junior defenseman Henry Thrun headed to the box for an interference penalty. Cornell then struck first with a power-play goal as junior forward Matthew Stienburg picked up the puck in front of the net and rifled it past Gibson.

“They started to win more races to pucks and more one-on-one battles. They got the power play going and scored the goal on the power play,” head coach Ted Donato ’91 said. “I thought, later on in the game, we did a little better job limiting the great chances.”

Beyond the scoring, the rivalry game saw chippiness as well. With 1:32 remaining in the first period, junior forward Austin Wong went to the box after a scrum that involved several Crimson and Big Red players. Wong’s minor for roughing put the Big Red on the power play as Harvard’s first-year defenseman Jack Bar and Cornell’s senior forward Brenden Locke also headed to the box with coincidental minors for hitting after the whistle.

The Crimson did manage to kill the Wong minor, but shortly after, the Big Red struck again to go up 2-0. Junior defenseman Sam Malinski took a long-range shot wide that caromed hard off the end boards and back into harm’s way, hitting Gibson off the deflection and finding its way into the net. From that point forward though, Gibson did not surrender another goal.

“It's one of those things where it's kind of a fork in the road,” Gibson said. “This game is either going to keep going downhill from a bounce like that, or just go the other way. So, I just kind of got into my personal zone and just tried to not think about it too much — just try to make saves, help my team.”

With Gibson keeping Cornell at two goals, Farrell clawed the Crimson back into the game with 13:47 to go in the second, scoring his first of two goals. Farrell found himself on a breakaway after a long stretch pass from first-year forward Matthew Coronato and made no mistake on the finish, ripping the puck off the inside of the post and into the top corner just above the outstretched glove of Howe.

Later in the second period, after Cornell had failed to clear the zone, senior forward Casey Dornbach made the Big Red pay, creeping above the goal line to receive a pass from sophomore forward Alex Laferriere and then finish into a near-open net, capping off a play of precise passing. Junior forward Nick Abruzzese provided the secondary assist on the Harvard equalizer. The scoring in the middle frame ended there, and the fifth and final goal of the game went to the Crimson in the early third, completing the 3-2 Harvard victory.

"It was just a great, great play from my linemates [Laferriere] and [Abruzzese]," Dornbach said. "We had a few good shifts there in a row, getting some momentum, and you could feel it starting to come. The boys made a great tic-tac-toe play, and [I'm] happy to be the beneficiary."

The Crimson will return to action at home with another conference game Saturday against Colgate before suiting up again just 48 hours later on the road at Northeastern on Monday.