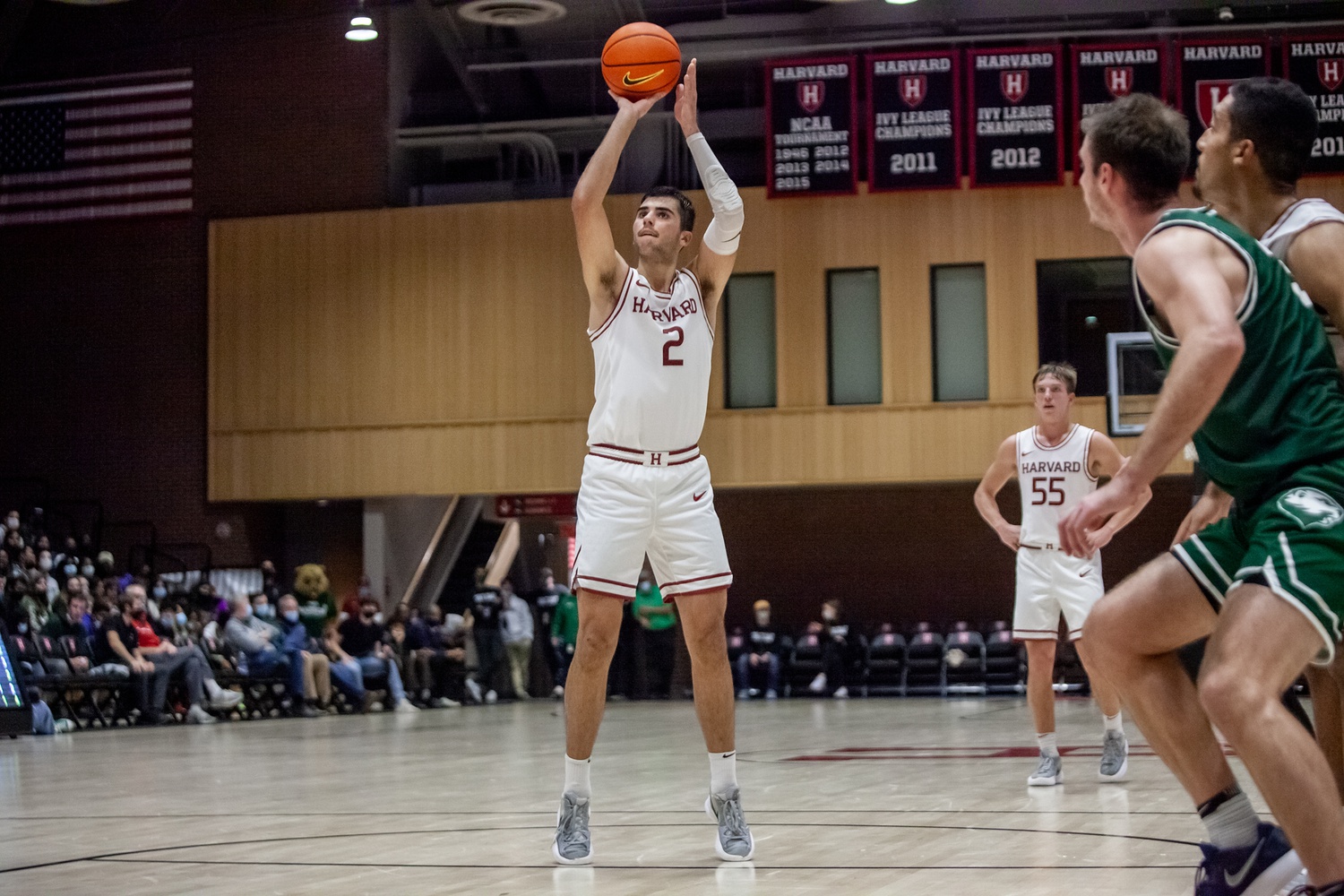 Junior guard Luka Sakota lines up a free throw attempt in Harvard's Dec. 6 win over Babson. The Crimson starter is averaging 12.0 points per game and shooting 40.8 percent from three-point range this season. By Dylan J. Goodman
By Amir Mamdani

Ten healthy players are all that remain at the moment for Harvard men’s basketball. The two-week break without competition — mandated for finals — could not come at a better time for the Crimson.

On most evenings at Lavietes Pavilion, Harvard would likely be pleased with a 10-point win with such a reduced roster. Monday, however, was the latest bump in a non-conference schedule that has been far from friendly for the Crimson (6-4), as the team struggled to pull away from Division III Babson in a game that Harvard eventually won by a 74-64 score.

“We don’t have a lot of bodies, we’re hurt, we’re depleted, whatever, we could make all the excuses in the world, we didn’t,” said senior guard Noah Kirkwood of Monday’s contest. “We obviously had some rough patches during the game. I don’t think we’re happy with how we played, but at the end of the day, a win is a win.”

Though the Beavers won the DIII National Championship as recently as 2017, this iteration of Babson men’s basketball has gotten off to a 6-4 start yet found itself leading at halftime on Monday night. After jumping out to a 24-9 lead, the Crimson closed the first half in dreadful fashion — held to just one point in over nine minutes of play, ceding 16 unanswered points to Division III opposition on home court. Rather than taking a timeout, Coach Tommy Amaker preferred to let Harvard play through the situation.

“We really wanted to see how we could find ourselves, and fight, and we had different lineups, absolutely,” Amaker said. “Sometimes we try to do that, and let them figure it out.”

Babson represents the latest game in a three-game stretch against regional competition that has left something to be desired for a Crimson team seeking to establish itself as a legitimate threat before Ivy competition. Close losses against URI at home and on the road at UMass last weekend left the team in search of a statement victory against Babson — but the Beavers had no interest in rolling over easily. And though Babson’s crowd brought a raucous environment across town to Lavietes Pavilion, with no short of three sections packed to the brim with fans donning dark green, the larger issue for Harvard is the lack of healthy, experienced players.

A rash of injuries to frontcourt players Mason Forbes, Justice Ajogbor, and Bennett Pitcher have left the Crimson without a true big man, as none of the three have dressed so far this season. Senior captain Kale Catchings — pressed into duty as the de-facto big man — suffered an injury of his own and has joined the ranks of players in street clothes. With the added loss of senior guard Spencer Freedman, Harvard has been reduced to 10 healthy players and is essentially playing with a seven-man rotation. Junior forward Chris Ledlum was only able to play 20 minutes against Babson, departing due to injury.

“No doubt about it, we look like we’re worn down a bit,” said Amaker of the team’s performance over the past few games. “It is what it is. I don’t know what else to say. We have what we have, and we’re going to try to do what we can with what we have.” 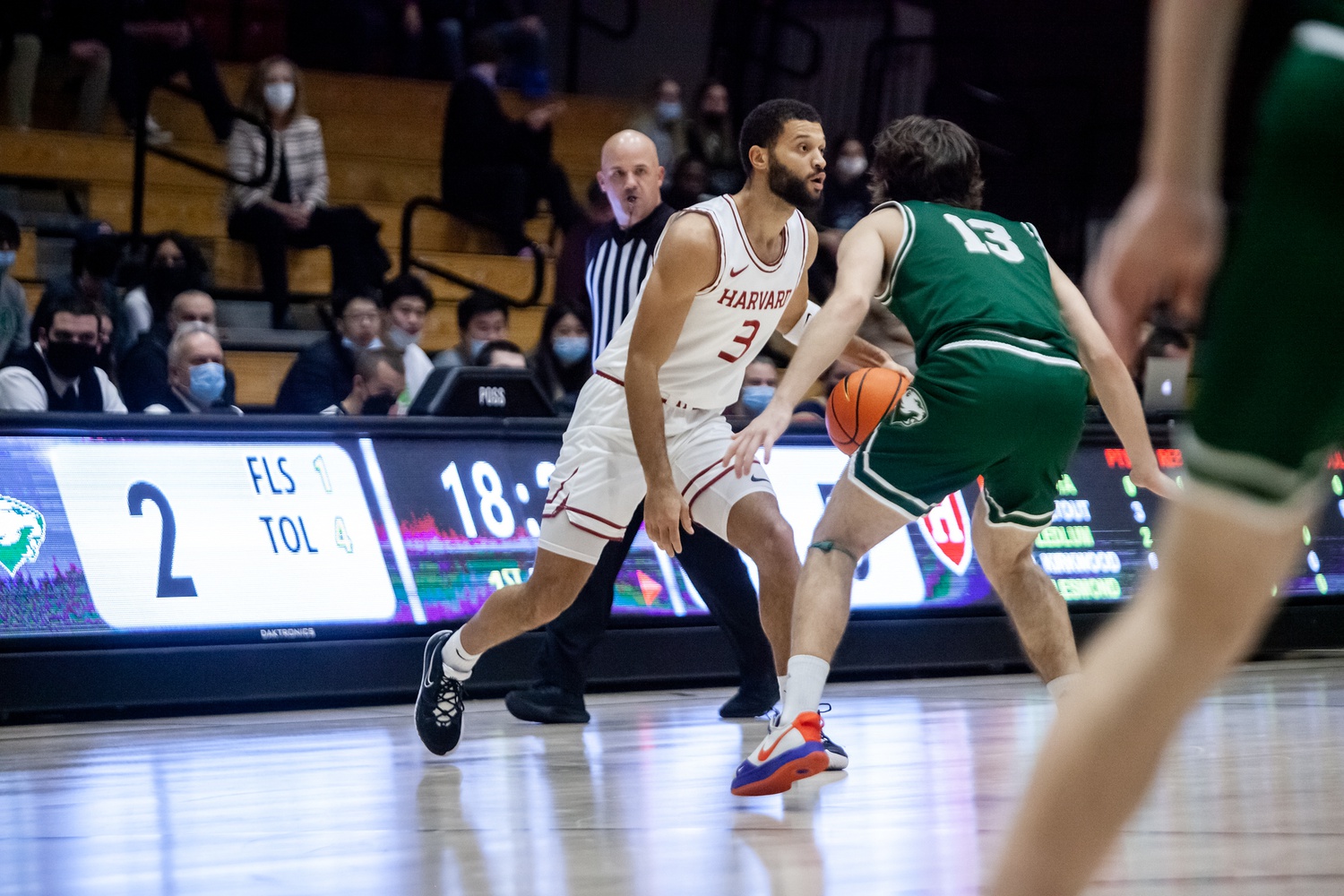 Junior guard and Brooklyn native Idan Tretout looks to blow by his defender in the Crimson's home win over Babson. By Dylan J. Goodman
Advertisement

As any fan or follower of Ivy League men’s basketball will certainly understand, overreacting to the non-conference slate would be a mistake. Wins and losses that matter in the Ancient Eight occur in January, February, and March.

But to say that the team’s health is of concern would be an understatement. To have a roster without a single healthy big man is a rare situation, and to play without one for an extended period can have far-reaching consequences. Wear and tear for Catchings, Ledlum, and Kirkwood — who are now asked to play inside due to the team’s lack of depth — seem practically inevitable. A point of emphasis for Kirkwood this season has been to improve and expand upon his game closer to the basket, in order to help establish an interior presence in the paint for a team that will sorely miss senior captains Mason Forbes and Kale Catchings.

“I feel like I can get comfortable with the step-back shot I have, and even though I feel like it’s a great shot for me, it’s in a lot of ways settling,” said Kirkwood of his focus on getting into the paint. “I took more of an emphasis today to get to the rim and to the line.”

Coach Amaker and his players have repeatedly refused to blame recent struggles on the team’s health or lack of big men, but the warning signs have been present since a loss to Siena, a program ranked 293rd out of 358 Division I programs in the KenPom Rankings. Six days after losing to Yale by 28 points on the same floor, the Saints were able to eke out a three-point win over a Harvard team that essentially played a seven-man rotation (first-year Louis Lesmond and senior Spencer Freedman combined for 10 minutes).

With games coming fast and furiously, the shorter rotations have taken a toll on the team. One of the squad’s priorities approaching the two-week break will be getting players healthy and rested. Games against Holy Cross, Howard, and a trip to Allen Fieldhouse to take on perennial blue-blood Kansas loom in late December before the Crimson open the Ivy League season against Princeton on Jan. 2.

“We’re hoping that we can get a little bit healthier, with treatment and health, and the things that need to happen for the guys that are banged up,” Amaker said. “We really need to hone in on the basics and the fundamentals, conditioning, blocking out, defending the ball, obviously our shooting.”

There have been several bright spots for the team thus far, however. Kirkwood has continued his strong play (16.2 ppg, 47 percent FG) and has emerged as a threat on the boards as well as showing a propensity for steals (nearly three per game). In many respects, Kirkwood is the heartbeat of this season’s team. Ledlum has continued his ascent towards being one of the Ivy League’s brightest stars, leads the team in scoring and rebounding (16.6 ppg, 8.9 rpg), and has tallied four double-doubles at a time when the Crimson is starved for effort on the boards.

Younger players on the team have exalted Kirkwood’s leadership attributes, particularly on a team that lacks significant upperclassmen depth.

“He’s been a great leader, especially for the freshman class,” Lesmond said. “He’s always here for us, on and off the court if we have questions, he gives us advice and shows us by leading by example.”

While Kirkwood and Ledlum are expected to lead the team from a scoring perspective, junior guard Luka Sakota has taken significant strides towards becoming one of the most reliable point guards in the league. The Etobicoke, Ont., native is averaging 12 points alongside nearly three assists and three rebounds per game and has helped cut down on turnovers from the point guard position. Sakota made two highlight-reel plays earlier in the season, hitting dramatic deep shots at the buzzer (one from next to the halfcourt logo) to send games into overtime against Iona and Colgate.

With injuries reducing the team’s front-line depth, first-year guards Denham Wojcik and Lesmond have stepped into the spotlight for the team, with the sharp-shooting Lesmond drawing a spot in the starting lineup against UMass and Babson. The Paris, France, native has seen a significant uptick in minutes during the team’s past few games and has shown a propensity to fire away from beyond the three-point line.

“It’s obviously a great opportunity, even more as a freshman with a team that trusts me,” said Lesmond of his expanded role. “Sometimes you have to step up, and I’m trying to do my best.”

Lesmond has taken 10 or more threes in three straight games (5-of-14 vs. URI, 3-of-11 at UMass, 3-of-12 vs. Babson), tallying a career-high 15 points against the Rams. Though several of the triples have come late in games, the stats tell the story of a first-year player thrust into the spotlight for an undermanned Crimson team.

Lesmond’s shooting represents a trend towards a three-point-focused attack that has come as much out of necessity as anything else. After years of watching the Crimson play through Chris Lewis on the interior, this iteration of Harvard basketball lacks a healthy big man to play a more traditional 4-around-1 style. The Crimson ranks in the top 35 teams in the country in percentage of points scored through three-pointers.

“We’re going to have to become a team that’s better percentage-wise, as a three-point shooting team,” Amaker said. “That’s got to be a weapon that we use.”

Still, there are certainly some concerning signs for Harvard men’s basketball through 10 games. The depleted health, particularly in the frontcourt, has forced the Crimson to play with grit and determination. It has also thrust players like Lesmond and Wojcik, who plays the majority of the backup point guard minutes, into the spotlight. Players like sophomore forward Sam Silverstein are playing minutes they might not have expected to at the outset of the season.

Despite these issues, overreacting to the non-conference slate would be a mistake. Though memories of watching injuries to Seth Towns and Bryce Aiken may be reawakened through the opening stanza of the campaign, the games that truly matter have yet to be played.

Like the seasons that precede this one, the goal that truly matters — and has lingered tantalizingly beyond the grasp of Harvard in recent years — is winning the Ivy League Tournament and qualifying for the NCAA Tournament. With Ivy Madness scheduled to take place at Lavietes Pavilion in March — a building the Crimson has proven worthy of defending over the past few years — there are certainly reasons to be optimistic.

The core of Kirkwood, Ledlum, Sakota, hopefully reinforced by front-court health and solid bench play from younger guards, has the potential to win the Ivy League Tournament. After several seasons of winning the regular-season title but losing the conference tournament, there can be no doubt that making it to March Madness is the priority.

Nothing else really matters.