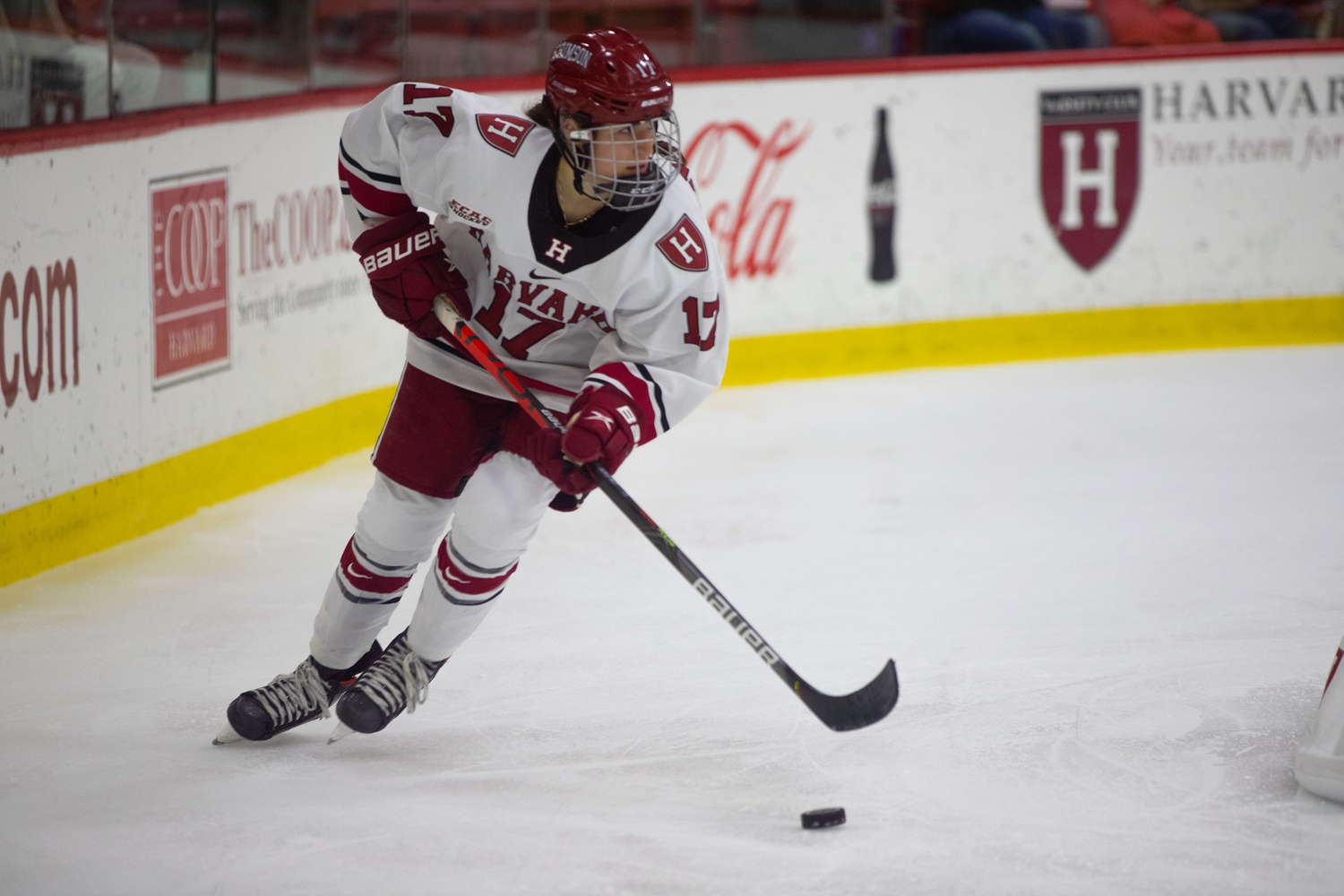 Senior Brooke Jovanovich controls the puck in a home matchup with Colgate on October 30th. The Crimson forward is a key veteran for her 7-3 squad, which is currently ranked No. 9/10 in the NCAA. By Angela Dela Cruz
By Mimi S. Koenig and Christopher D. Wright, Contributing Writers

Building off of a statement win against Brown two weeks ago, the Harvard women’s ice hockey team continued its recent strong play by outlasting the University of New Hampshire, 3-2, last Tuesday at the Whittemore Center.

After a strong opening period for Harvard — which saw freshman forward Paige Lester score her first career goal 15 minutes in — the Wildcats threatened in the second but were ultimately held in check before the Crimson were able to put distance between the two teams in the third period to secure the victory.

“A win’s a win,” Harvard head coach Katey Stone said after the game. “Whether it’s a pretty win, an ugly win. … On the road it’s tough to win. And so gutting out a victory on the road is a really good thing. Good teams find a way to do it.”

Entering the road contest, the Crimson was undefeated against non-conference opponents. However, two of its three losses occurred away from the home fans at the Bright-Landry Hockey Center.

The matchup also pitted Coach Stone against her alma mater. While at UNH, she captained the women’s hockey team, leading the Wildcats to two conference championships. Heading into this game, her 40th matchup against her former team, she held an 18-16-5 record all-time.

After a 10-day layoff, the Crimson wasted no time settling into the game. Despite losing the opening faceoff, they dominated possession and fired eight shots within the first six minutes of the game. Harvard received its first advantage at the 6:54 mark, when UNH received a two-minute penalty for hooking. Although the Crimson had a five-on-four advantage, it was unable to capitalize on any of its three shots during the power play. After failing to convert on early chances, the Crimson got onto the board first thanks to Lester’s goal 15 minutes into the first frame. The forward guided a pass from senior forward Brooke Jovanovich into the goal, putting Harvard up 1-0.

The Wildcats came roaring back to life in the second period. Its 15 shots were nearly double the nine shots that it fired in the first period. UNH was presented with its best chance when it went on the power play after a minor penalty by Harvard. But the Crimson held the Wildcats to just one shot and killed off the advantage, generating momentum to build on going into the third period. Senior goalie and captain Becky Dutton kept the shutout alive by saving six shots in the period.

After a dull second period, the Crimson offense returned to its first-period form. Senior forward Becca Gilmore scored early in the third period to extend the Crimson’s lead to 2-0. The goal was her seventh of the season — the most on the team.

“A lot of that has to do with the chemistry I have with my line,” Gilmore said of her high-level play. “Generating chances by just creating great opportunities from both Anne Bloomer and Kristin Della Rovere there. And then obviously when the puck keeps going into the net for us, you can build confidence game to game and you really don’t think about it much and you just play the game of hockey.”

Three minutes later, UNH responded with a goal by sophomore forward Nicole Kelly. Over the next seven minutes, each team failed to convert their power play chances. With five minutes left in the period, Harvard senior forward Keely Moy fired a shot into the goal to give the Crimson a two-goal advantage.

UNH junior forward Jada Christian scored a goal in the waning minutes of the third period, but Harvard was able to hold on for the 3-2 win.

Coach Stone attributed much of the team’s success to the stellar play of its goaltender, Dutton, who made 19 saves in the game.

“I think Becky Dutton played really well for us today,” Stone said. “[She] made the saves we needed her to make. We kind of left her out to dry a little bit a couple times and we just need to be better in front of her. But I thought she did a great job and we just kept grinding it out.”